How the UCI Made Me a Thief 32

Forgive me, NBC Sports Network, for I have sinned. 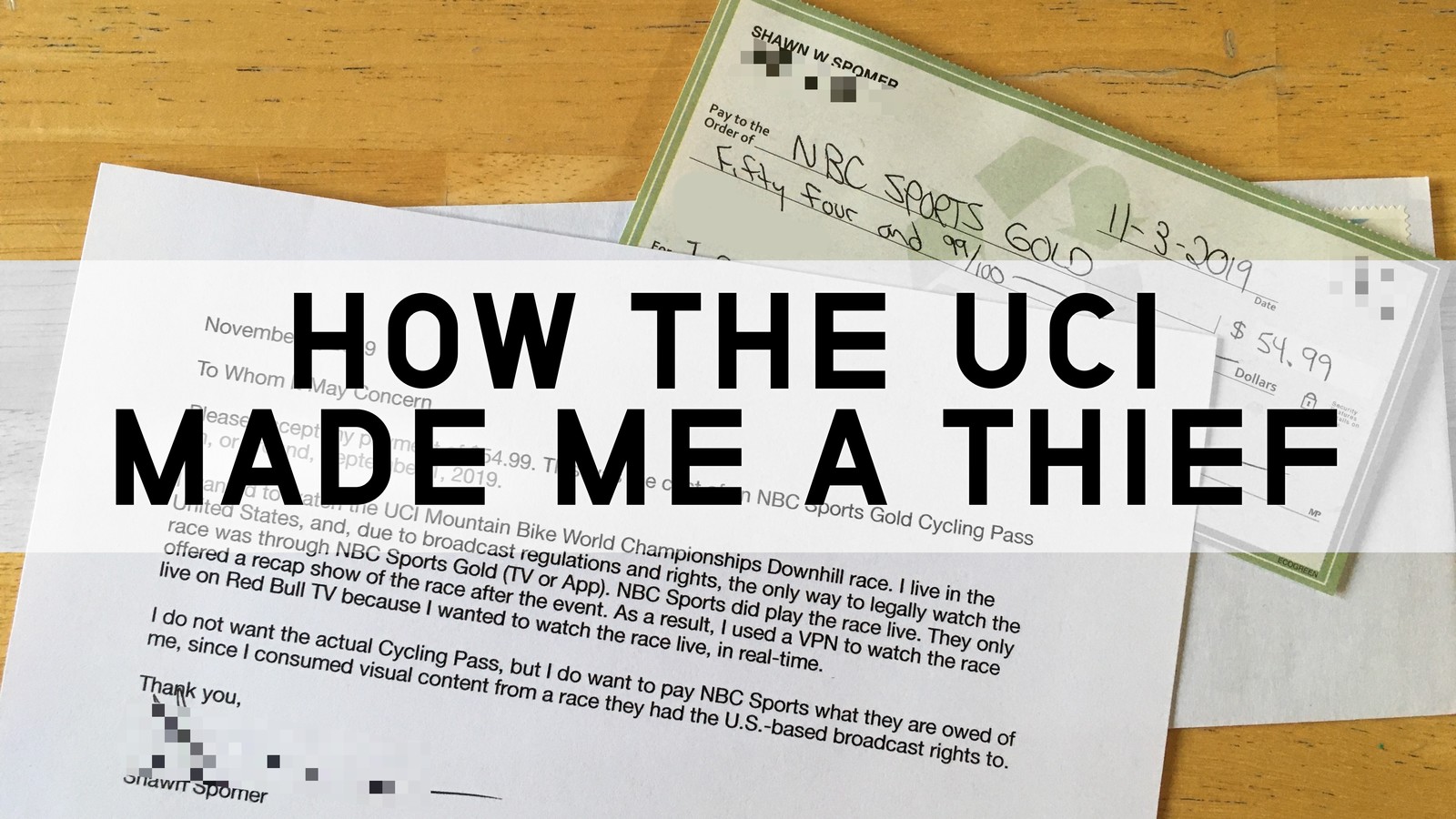 Isn’t it the way of a Millennial to blame someone else for their short-comings as they pursue an entitlement? The problem is, I’m not a Millennial. I think I’m a Gen-Xer. I really like Nirvana and Pearl Jam. I had 39 Smooth by Green Day on cassette in high school before they were cool. That means I’m a Gen-Xer, right? All those movies about Gen-Xers, like Singles, portrayed the members of that generation as lazy and complaining. I love to complain, and I can be pretty lazy. I like to watch golf on TV and fall asleep on Sundays. Golf isn’t too Gen-X, but falling asleep in the middle of the day is. TV is a Gen-X thing, too. Millenials don’t even use a TV, do they? They’re crook-neckedly and metaphysically connected to a sorta-life through their smartphones. They're not shaking Dorito crumbs off their spare tire as they slumber by the glow on an outdated Magnavox that only gets 720p. Enter the confusion.

If reading isn't your thing, you can listen to the narrated version of this article. 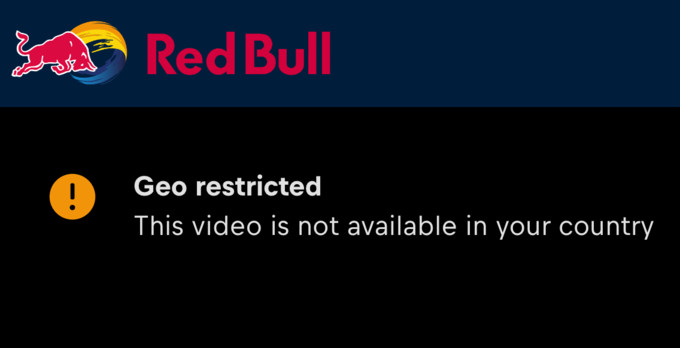 Throughout the entirety of the 2019 UCI Mountain Bike World Cup race calendar, Red Bull TV has the broadcast rights and displays each race live, for free on redbull.tv. The World Cup Downhill races are the pinnacle of mountain bike competition, excitement and drama. The sportscasters, Rob Warner and Claudio Calouri, are staples of the institution of modern downhill mountain bike racing. The webcasts are well done and the action is spectacular…and the kicker is that there are no hoops to jump through to watch these shows, other than typing redbull.tv in a browser address bar.

For some reason (which I’ll assume is money), the UCI likes to imply they hate mountain bikers by complicating the viewing of the Mountain Bike World Championships. This one-day, winner-take-all race featuring the same elite-level competitors as the Mountain Bike World Cup, is not broadcast for free all over the world on Red Bull TV. It’s only broadcast for free on Red Bull TV if you live in places like Congo, Costa Rica, Cote d'Ivoire, Croatia, Cyprus, Czech Republic, Djibouti and so on. The original press release by the UCI said the U.S.A, Australia, France, Japan, the UK and some other MTB-heavy nations like Italy, were NOT included in the free Red Bull webcast of the 2019 World Champs. A few days later, Australia, France, Japan and the UK made the cut and were back on for Red Bull’s free webcast. The USA, still in the shitter.

When the news first broke that complimentary DH-on-DH action would not be available to the Land of the Free, NBC Sports Network would come through to be our savior, for a price. Sweet, I already pay the $79 or whatever for the Moto pass on the NBC Sports app so I can watch Supercross and Motocross. I’ll gladly financially support the activity that supports me financially by purchasing a license to watch mountain biking’s most exciting one-day downhill race. 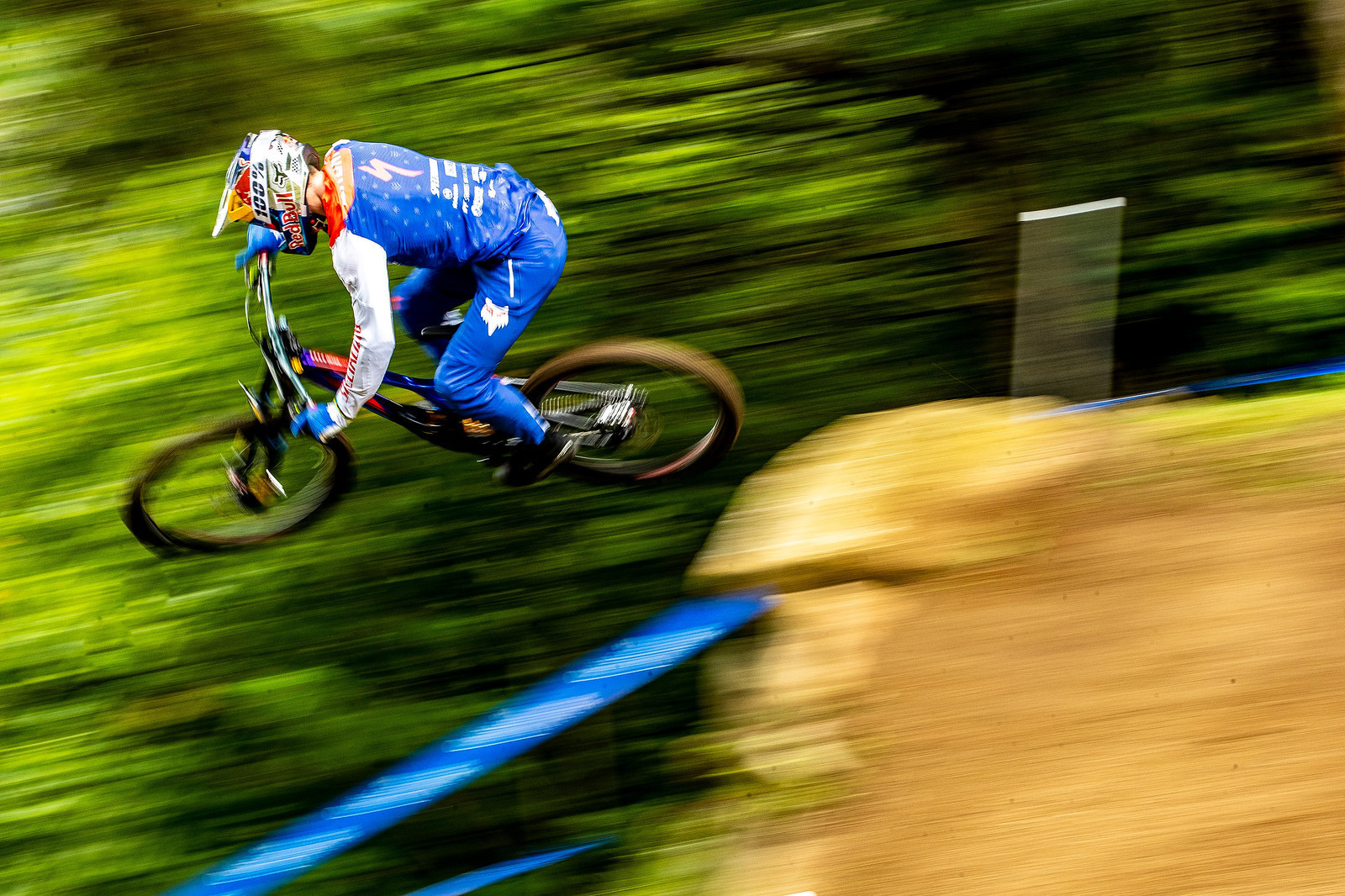 The 2019 World Champs Downhill race was on September 1. On August 27 at 8:17am, the NBC Sports app did not include Downhill on their coverage schedule. They were only displaying Cross Country broadcast programming. Time to panic. How am I going to watch Worlds? A schedule update arrived, and on August 28, Downhill was added to the NBC Sports schedule. But WTF? All that was listed was a recap show hours after the actual race on September 1st. The cost for this recap was $54.99 - the price of the annual Cycling Pass on NBC Sports. The Cycling Pass is a great chance for bicycle road racing fans to keep up on events across the planet with exclusive coverage. Mountain bikers, however, don’t get much out of the $54.99 except for slivers and scraps from World Champs. 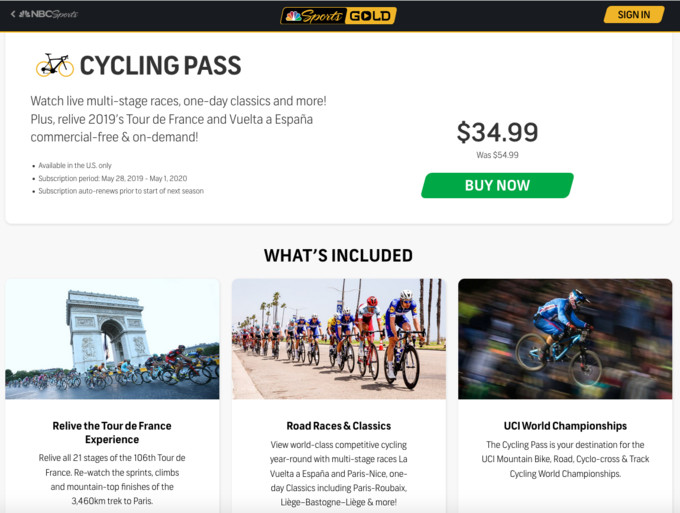 That wouldn’t do. That wouldn’t do at all. Does NBC Sports not know that I was at the 2001 UCI Mountain Bike World Championships in Vail, Colorado? Did they not know that my career hinged on watching the race live, so I could report on it? Did they know that I would have easily paid $54.99 to watch the DH race live, but I would not pay $54.99 to watch a recap after the event, only to have the bulk of my $54.99 go toward a year of road cycling events? Did they know that if Warner and Claudio weren’t the commentators**, that the race would be comparable to the golf that puts me to sleep on a Sunday afternoon? With two days to spare, I decided I could not do the right thing. I could not pay to watch World Champs, late, on NBC. It was time to hatch an Ocean’s Eleven-like plan to watch the 2019 World Championships, live, on Red Bull TV, even though it was illegal for me, a U.S. viewer.

Two days isn’t a lot of time to concoct a heist like they did in Ocean’s Eleven (probably another Gen-Xer-favorite movie). Thankfully, stealing TV on the internet, and getting away with it, is about as difficult as putting that Snickers from Perry’s Drug Store in my pocket without the 87-year-old clerk noticing (something I still regret to this day, some 38 years later). It’s not hard to steal internet TV thanks to Virtual Private Networks. A Virtual Private Network (VPN) is a simply-installed piece of computer-nerd-magic that tricks the dark overlords of the UCI, NBC and Red Bull into thinking you’re watching World Champs from the UK, not the USA. About 4 clicks and an email address later, and I could watch World Champs on Red Bull TV for free. On September 1, I did just that, and loved every second of it…except for the part where Troy Brosnan lost by .5 seconds to Loic Bruni. That shit was HEART-BREAKING!

The nagging, ever-present Millennial influence of fake nerd glasses, high-waisted overalls, smartphones and Snapchat had etched away a moral foundation I had built over a lifetime. Well, one I had re-built since realizing that stealing a Snickers from Perry’s Drug Store wasn’t cool. I took what I deserved because I deserved it and it was someone else’s fault, not mine. This feels good. I get what I want and I don’t have to earn for it or take blame for any repercussions of the transaction. 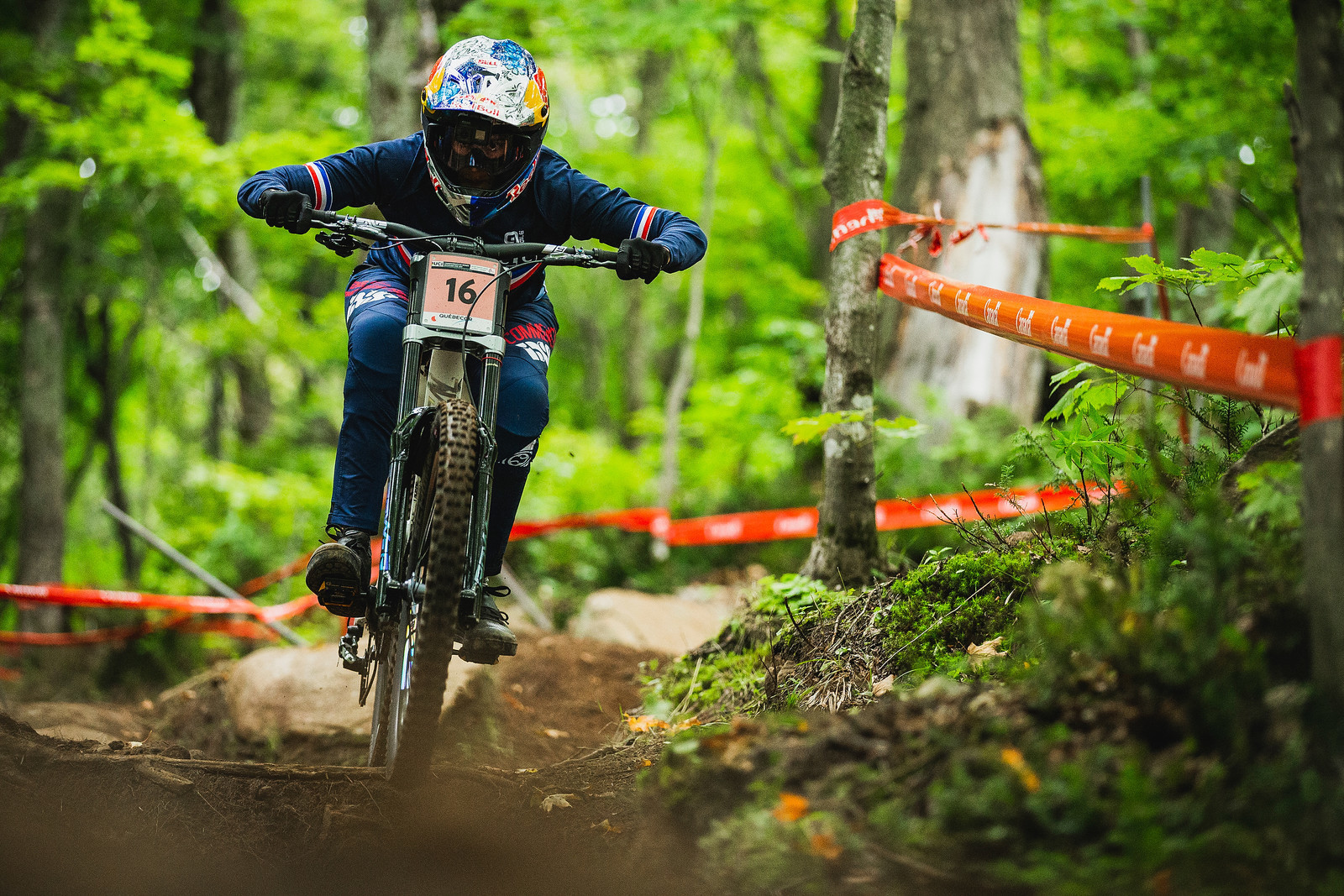 But here we are, over two months later, and I’m laying out my Gen-X confession like depressed Myspacer. I’m so glad I saw that race. I’d feel way worse right now if I paid NBC and didn’t get to watch it live, and if I didn’t get to experience Rob Warner and Claudio Calouri commentating. I do, however, feel bad for sort-of stealing from mountain biking.

To save my soul and our sport, I sent a check for $54.99 to NBC Sports. I clicked around their websites in hopes of finding an address in which to remit payment by check, but I couldn’t find any. The closest thing I found was their Chief Privacy Officer at NBCUniversal Legal Department, 30 Rockefeller Plaza, New York, NY 10112. I'm going to round up and just send something to "NBC" at that address. I figure someon there will know which inter-office mail slot will get my payment to the right department. I've since learned the Cycling Pass is only $34.99 now. I'm not going to cheap-out and send only $34.99. They get the full $54.99 from me.

I sent a check as payment for a few reasons. First of all, I don’t want the Cycling Pass on NBC Sports. I don’t want to use my credit card to order the pass, adding a new roadie fan subscriber to their system. I only want to pay for the programming I consumed - World Champs. $55 for that drama is well-spent. I also want NBC Sports to have to jump through some hoops to get the money from me. A check is an administrative middle finger these days. Not being able to legally watching World Champs, live, the way a mountain biker should have been able to watch, was a middle finger to me. I figure we’ll be even when and if they actually cash the check. 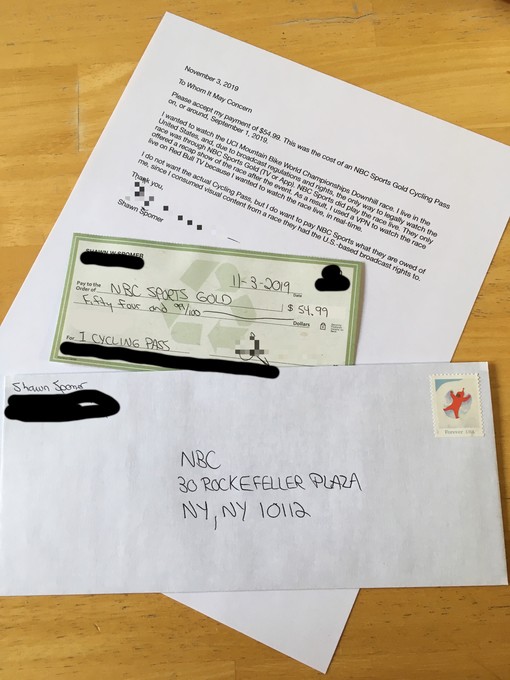 I’m expecting one of those creepy, eye-scanning robot bugs and/or John Anderton (played by Tom Cruise) from Minority Report to break down my door at any moment. Minority Report is probably a movie that Gen-Xers enjoy. I enjoyed it. I’ve watched it multiple times, in fact. It’s a movie about future crime and arresting or capturing people before they perform their crime of the future. If I’m left with the same choice for watching the UCI MTB World Champs Downhill in the year 2020, I will, again, use a VPN to watch the race live via Red Bull TV. I hope, however, that this open confession may sway the UCI to avoid the shortsightedness of selling a webcast to the highest (I assume) bidder. I don’t know anyone that watched the World Champs webcast on the NBC Sports app. And I know a lot of mountain bike race fans. How many people watched via NBC? 37? 142? Because the product sucked (it wasn’t live), no one watched. Because no one watched, NBC thinks mountain biking is lame. Because lame mountain biking isn’t broadcast by major networks like NBC, we’re stuck with athletes living at their parents’ house, stoked to get a goggle tear-off sponsorship. Mountain bike marketability in the USA is crushed because the UCI forces an awkward, and seemingly random, broadcast option for World Championships. To save mountain biking, I’ll gladly let the UCI make me a thief again.

**I just assumed Rob and Claudio wouldn’t be commentating on NBC Sports. Unfortunately, I have no way of confirming their presence (or lack of presence) on NBC because I don’t know a single person who watched World Champs on the NBC Sports app (which is pure comedy, IMO).

View replies to: How the UCI Made Me a Thief