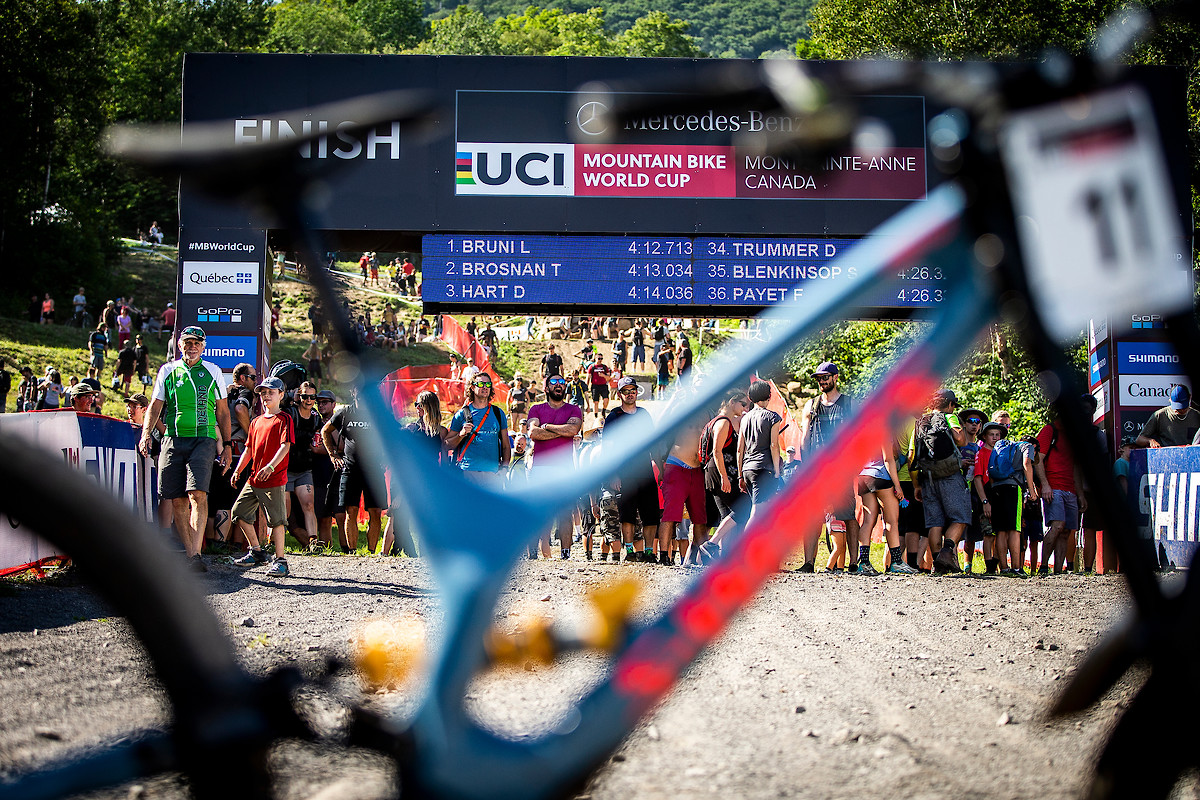 Last year #msa wasn’t so kind(especially to my shorts) this year we’re back for redemption! #peakedtooearly

brook making sure the MSA rocks are scared

iceman2058 8/27/2019 2:44am
8/27/2019 2:44am
World Champs is a special event, which also means special broadcasting arrangements. Because the UCI sells broadcasting rights to Worlds separately, things are a little bit different than for a regular World Cup race. Red Bull TV will still be broadcasting the races in many countries, but there are some exceptions, most notably France (L'Equipe), Australia (FOX, SBS), the UK (BBC), New Zealand (Sky New Zealand) and the US (NBC Sports). In those countries, you'll need to tune into the relevant broadcaster to watch the race.

At the time of writing this, here is a list of countries where you WILL be able to watch on Red Bull TV as usual:

for US, i found this on NBC Sports Gold so far (only shows CC and XC races though and requires cycling pass at $54.99 for the year) - https://www.nbcsports.com/gold/cycling/schedule/2019-08-31 - i'll keep digging. if anyone else figures out how to watch DH in the US, post up.
sspomer

E-MTB: bringing together so many disciplines
As well as tremendously exciting and strategically compelling racing, this new format is a clear endorsement of the electrically-assisted bike’s emerging place in sport and in society. Riders will tackle a 5.6km cross-country course on E-Mountain bikes that have a maximum continuous rate of power of 250 watts with assistance topping out at 25km/h. And, while the usual technical assistance is afforded to all riders, no bike or battery changes are permitted mid-race.

In the Men Elite race there are some huge names among the 46 riders from 17 nations, with ages ranging between 20 and 57. They include major stars from cross-country Olympic (XCO) racing such as 2008 UCI World Champion and Sydney 2000 Olympic bronze medalist Christoph Sauser (SUI), three-time mixed relay UCI World Champion and London 2012 Olympic bronze medalist Marco-Aurelio Fontana (ITA), and XCO mega-star Julien Absalon (FRA), the most decorated man in his field. A fascinating aspect of E-MTB is how it marries stars from different formats and sports. Look out for former moto-cross rider Charlie Mullins (USA), one of the best-loved characters in DHI/Enduro, Wyn Masters (NZL), and from France, multiple age-group DHI World Champion Jean-Pierre Bruni… who taught his son Loïc everything he knows.

In the Women’s field, riders include four-cross legend with BMX and DHI skills Anneke Beerten (NED), Canadian all-rounder and cyclo-cross specialist Maghalie Rochette, as well as Nadine Sapin (FRA) who’s an XCO rider with an equine background plus broad experience that touches Enduro.

XCO – purist racing at every category
The first XCO rainbow jerseys will be awarded on Wednesday, in the Team Relay. Can Switzerland make it three in a row, or could France or one of the other challengers take first blood?

Women and Men Junior finals are raced on Thursday 29th, followed by Under-23 Men finals on Friday 30th and Under.23 Women in the morning of Saturday 31st. Last year’s Under-23 Women was a Swiss show with Alessandra Keller and Sina Frei taking the 1-2 ahead of Italy’s Marika Tovo… but the competition looks more varied and just as fierce this year. Frei is favourite, but amongst the many others who could take the title are Evie Richards (GBR), Ronja Eibl (GER) and Laura Stigger (AUT) – last year’s Junior World Champion who has stepped up a category and looks comfortable with regular UCI World Cup podiums.

The Under-23 Men’s race is set to be a fascinating battle between Vlad Dascula (ROU), Filippo Colombo (SUI) and Jofre Cullell (ESP), but a number of other riders could be there including Antoine Philipp (FRA) and Max Brandle (GER). The biggest cheers will be in hope of a home win for Canadian Sean Fincham.

Saturday 31st sees the final for Elite Women. 2017 UCI World Champion Jolanda Neff (SUI) will look to wrestle her title back from reigning Champion Kate Courtney (USA). But as throughout the UCI World Cup campaign some other strong riders will not let them have it their own way: Pauline Ferrand-Prévot (FRA) is on scintillating form, Anne Terpstra and Anne Tauber (both NED) will push hard, 2016 UCI World Champion Annika Langvad considers herself still in the mix, and you’ll hear the reaction to any attacks from Canadians Emily Batty and Catharine Pendrel. If you want a fairy-tale in this one, watch Sweden’s only representative in Canada, 2016 Under-23 UCI World Champion and Olympic Champion the same year Jenny Rissveds.

The Men Elite follow. There is no doubt that seven-time XCO UCI World Champion Nino Schurter (SUI) wants to make it eight including a record five consecutive titles (he’s tied on four with Julien Absalon). In the absence of Mathieu Van der Poel, he remains favourite – and that means he’s ready to be shot down by a hard-chasing pack. Schurter’s compatriot Mathias Flückiger is among the most likely, along with Brazil’s Henrique Avancini who is in fine form. Gerhard Kerschbaumer (ITA) is one to watch, along with Ondrej Cink (CZE) and a strong French contingent including Jordan Sarrou, Stephane Tempier, Titouan Caroud and Maxime Marotte.

All eyes will be on French National Champion and UCI World Cup overall leader Thibaut Daprela in the Junior Men’s competition. But with a strong field of 52 racers across 20 nations, competition will be intense, not least from his countryman Matteo Iniguez, the Southern Hemisphere hot-shots Ariki-Tuhoto Pene (NZL), 2018 silver medalist Kye A’Hern (AUS) and the British duo of Jamie Edmondson and Luke Mumford. There is a strong Canadian contingent, including Patrick Laffey, Lucas Cruz and Seth Sherlock – winner of the last UCI World Cup round in Lenzerheide, Switzerland.

With the British duo of reigning and multiple UCI World Champion Rachel Atherton out through injury and Tahnée Seagrave racing but not fully recovered from injury, Tracey Hannah knows Sunday afternoon’s Elite Women’s competition is the perfect time to convert her multiple UCI World Championship podiums into the top spot and the rainbow jersey. But a raft of European racers – and Canada’s Miranda Miller, UCI World Champion in 2017 – won’t let the Australian relax. Look out for on-form French rider Marine Cabirou and her compatriot Myriam Nicole (runner-up last year), young German Nina Hoffman and the Swiss Camille Balanche.

The show-stopper will be the Elite Men’s battle. Triple UCI World Champion Loïc Bruni has been head-to-head with fellow Frenchman Amaury Pierron all year in the UCI World Cup, with Loris Vergier not far behind and 2018 Junior UCI World Champion Remi Thiron also in the mix. But it is not all about the French riders.

From what I’ve been reading it looks like NBC is only showing the XC.

What are some good VPNs?
MPH24

MPH24 wrote:
Is it possible DH ends up on RB?

that would be cool. i'm sure we'll hear about it all soon.
sspomer 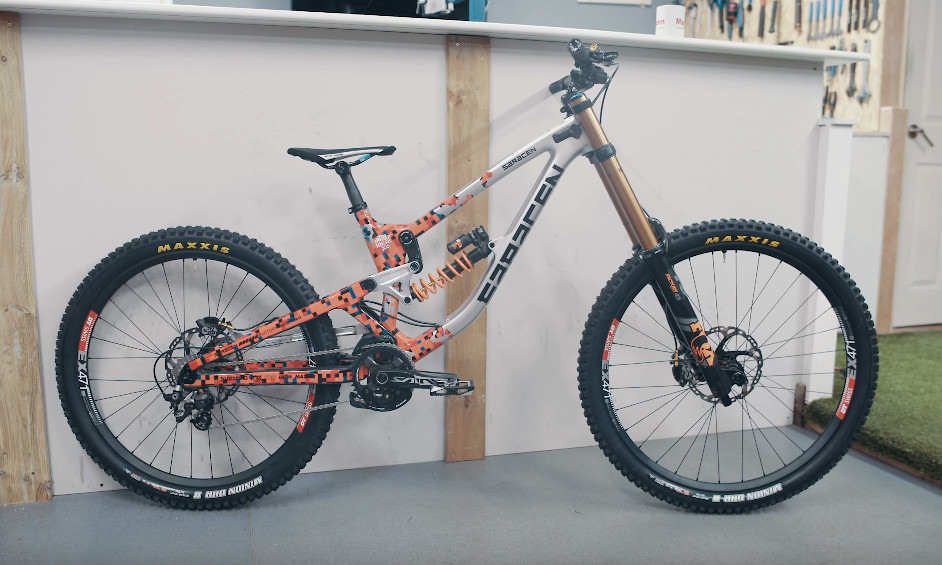 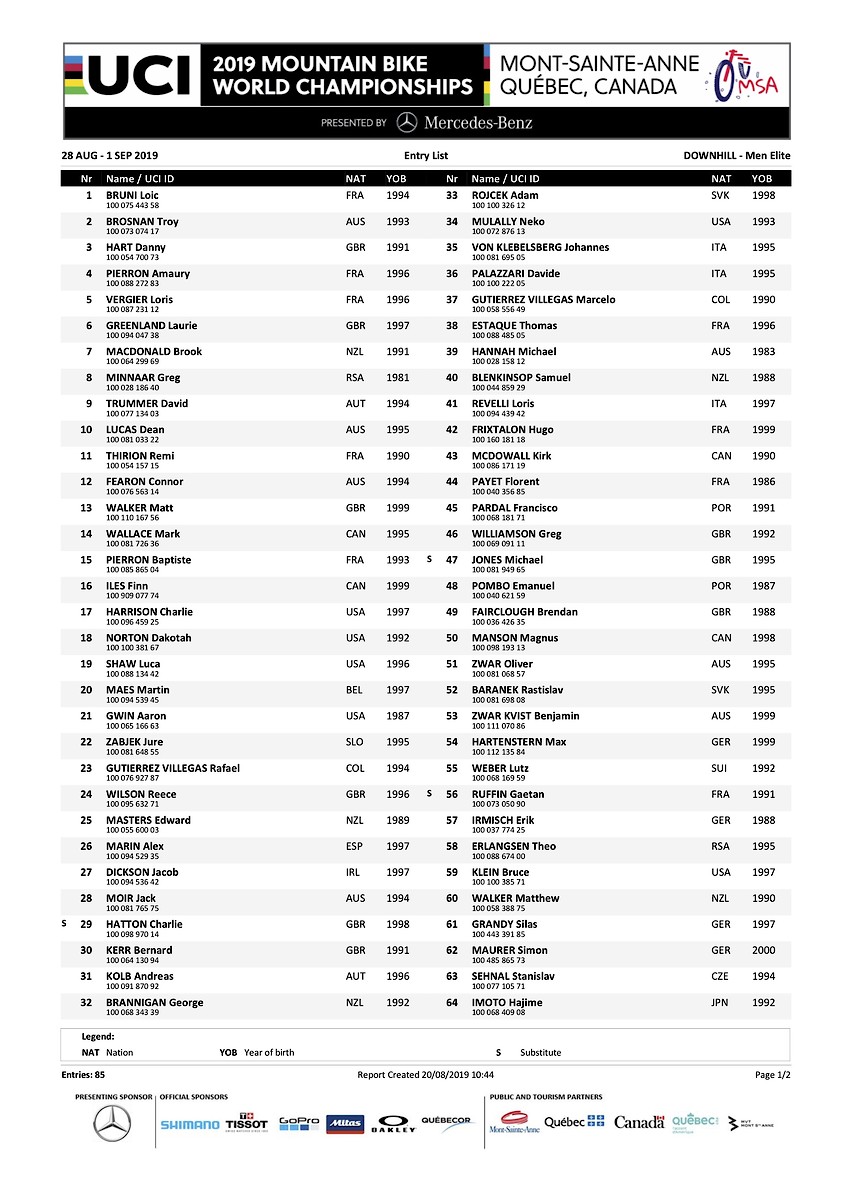 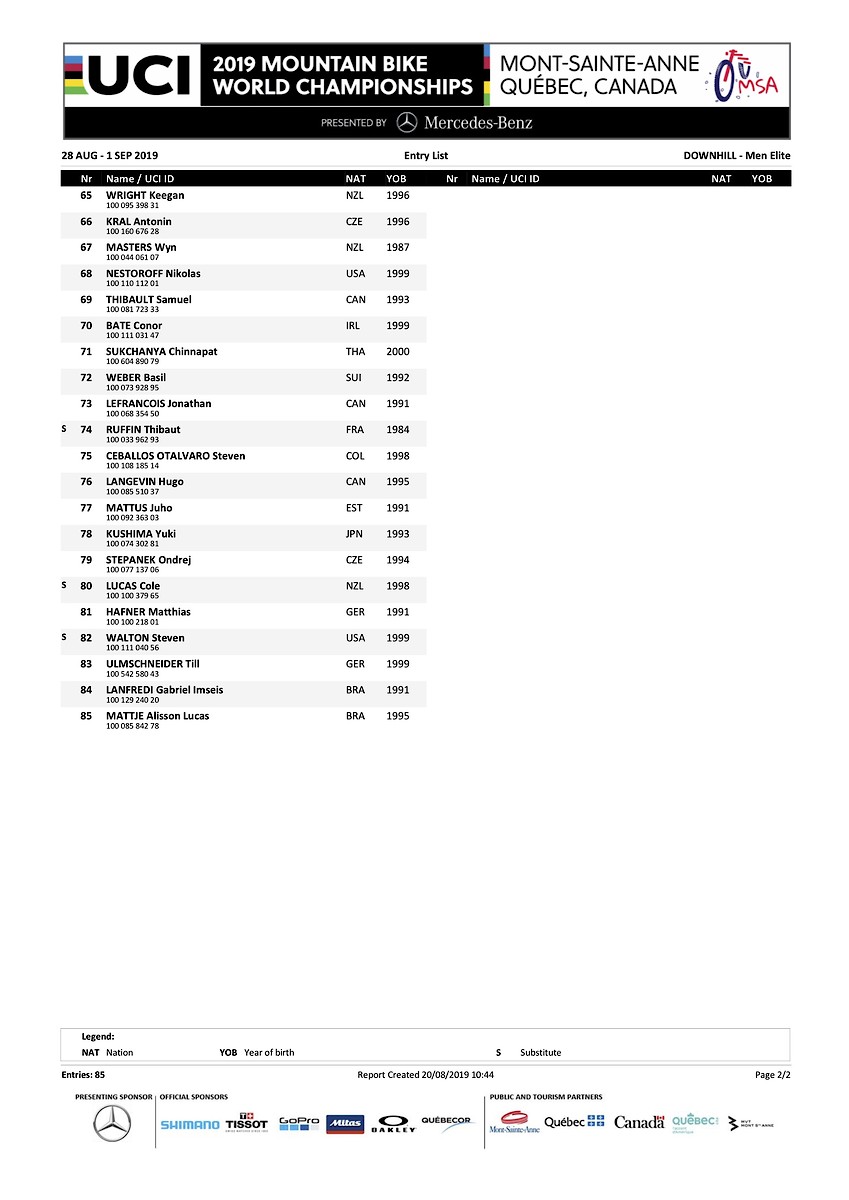 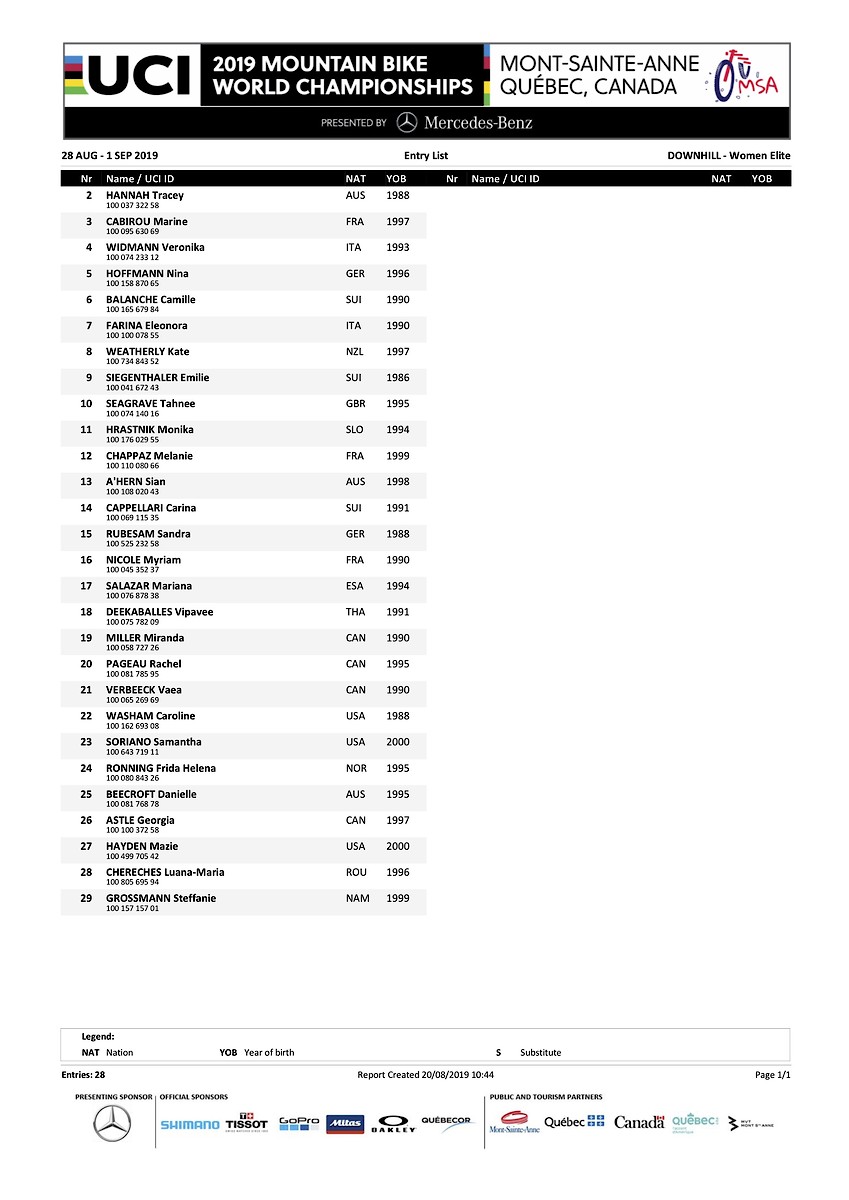 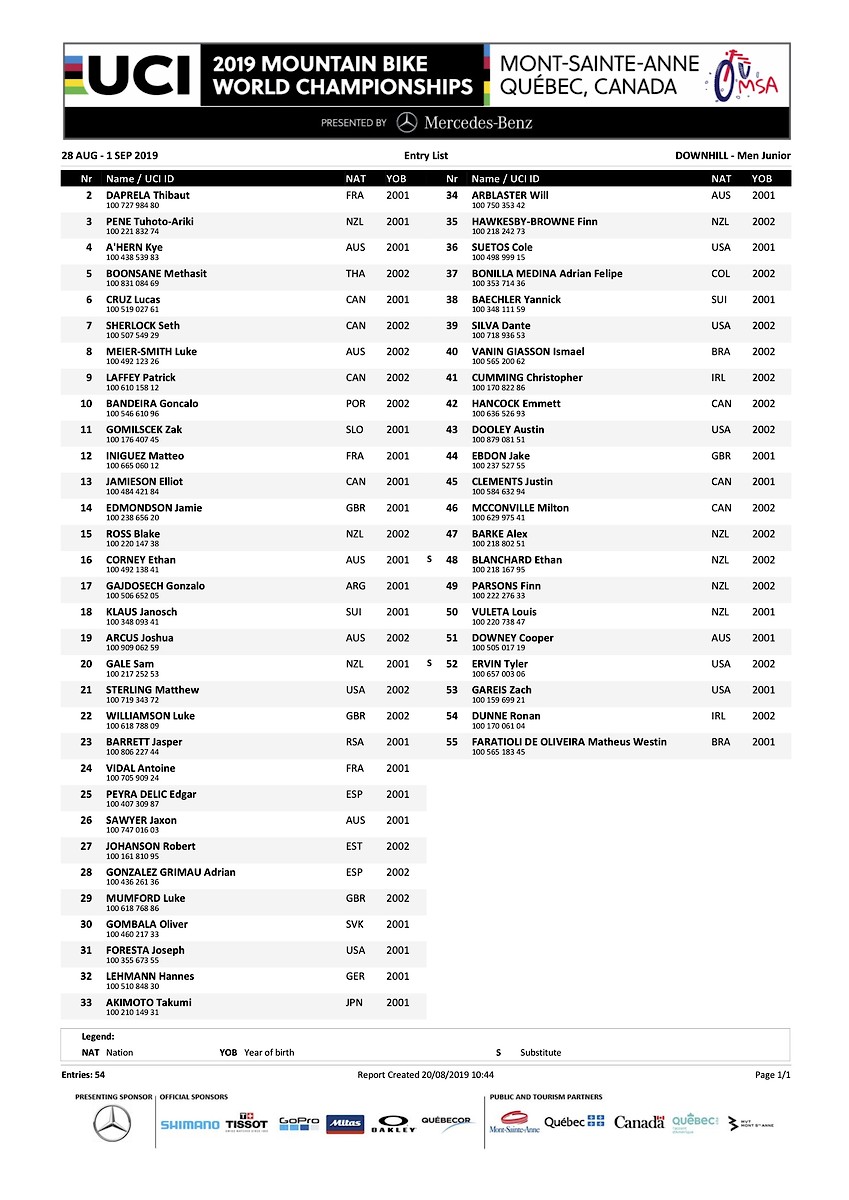 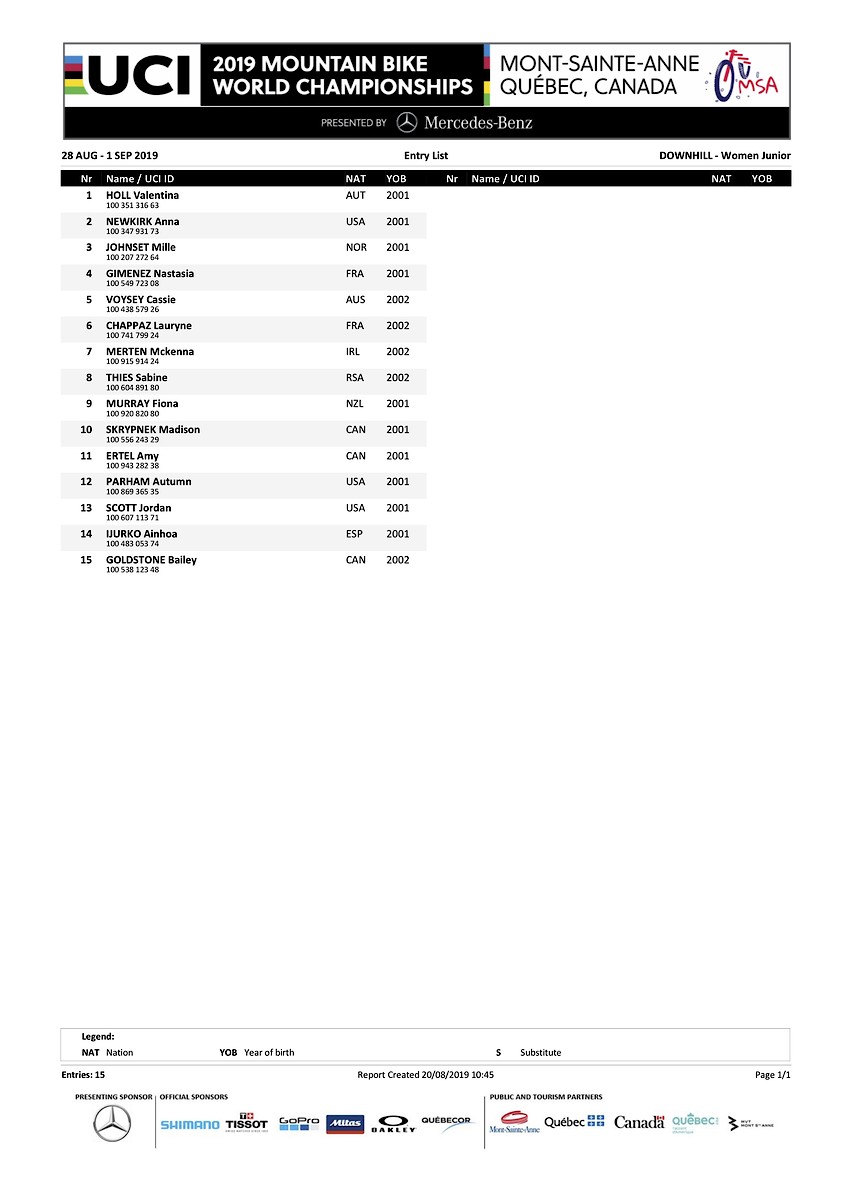 for US, i found this on NBC Sports Gold so far (only shows CC and XC races though and requires cycling pass at $54.99 for the year) - https://www.nbcsports.com/gold/cycling/schedule/2019-08-31 - i'll keep digging. if anyone else figures out how to watch DH in the US, post up.

It’s just like dodger games. Start a FB closed group and have people in Red Bull viewing country’s stream live to the closed group. IDK, that’s all I got.. my nbc shows that it’s on for 2 hours on Sunday night 10pm to midnight pst
BetterRide.net

Thank you! I don't have a TV but I do have a VPN! Don't think I would have thought of that.
iceman2058 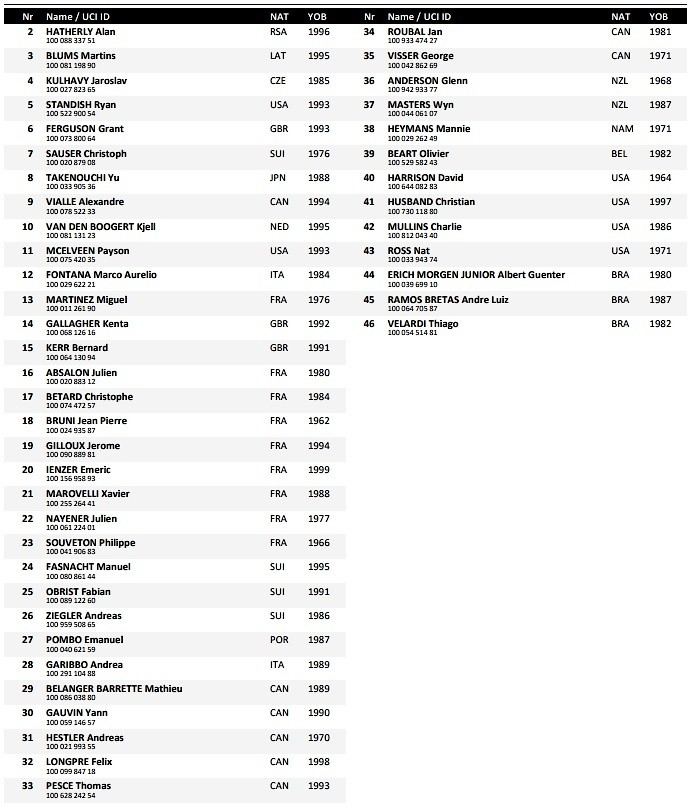 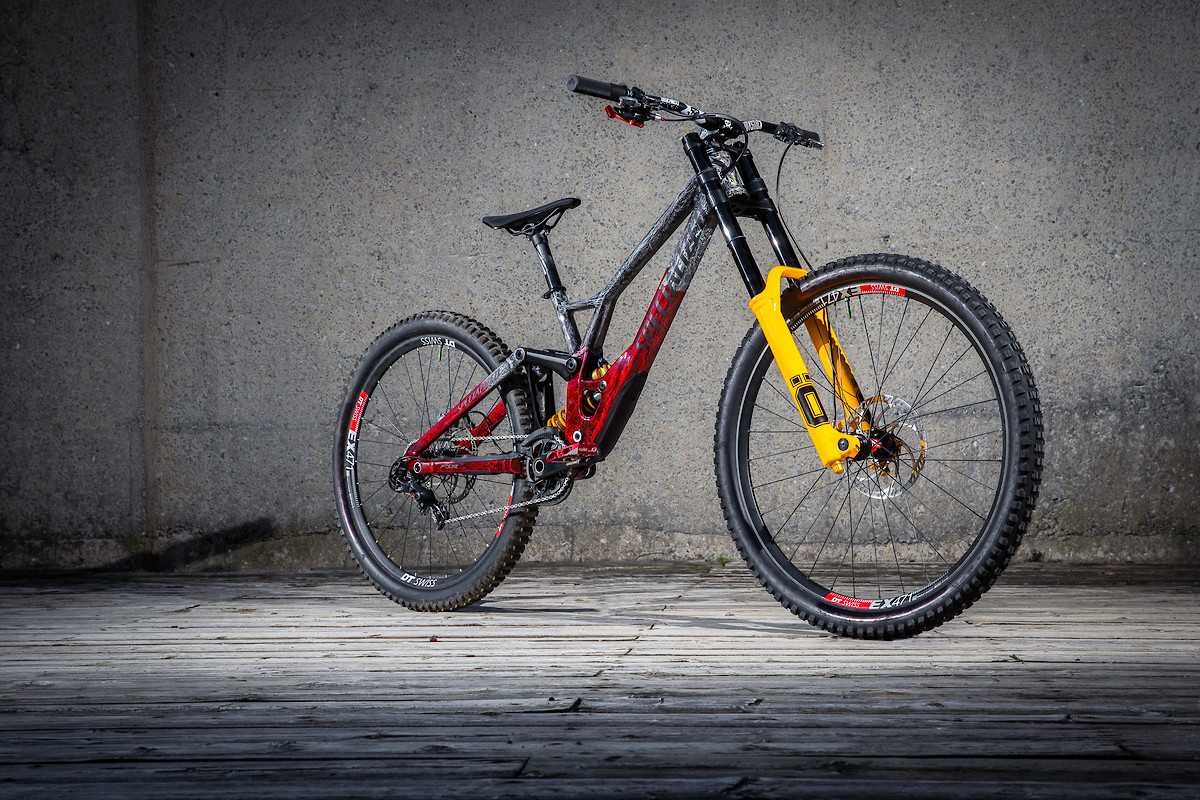 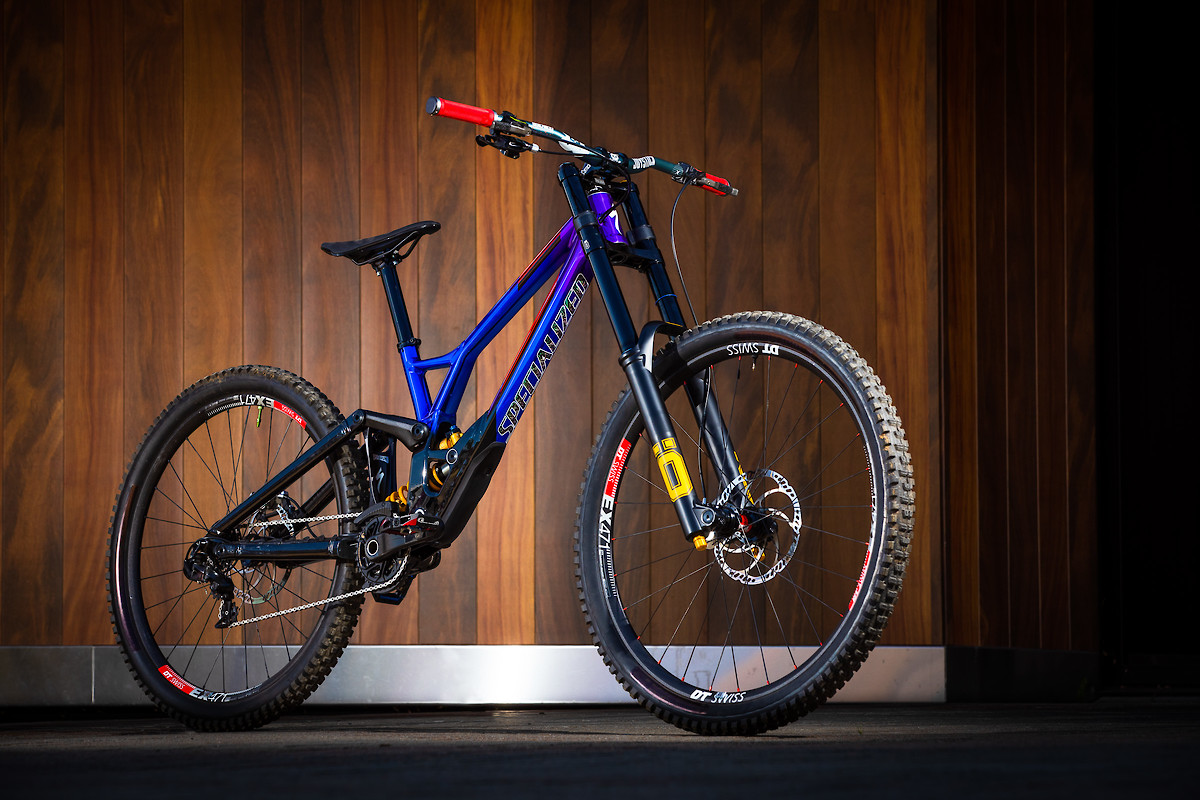 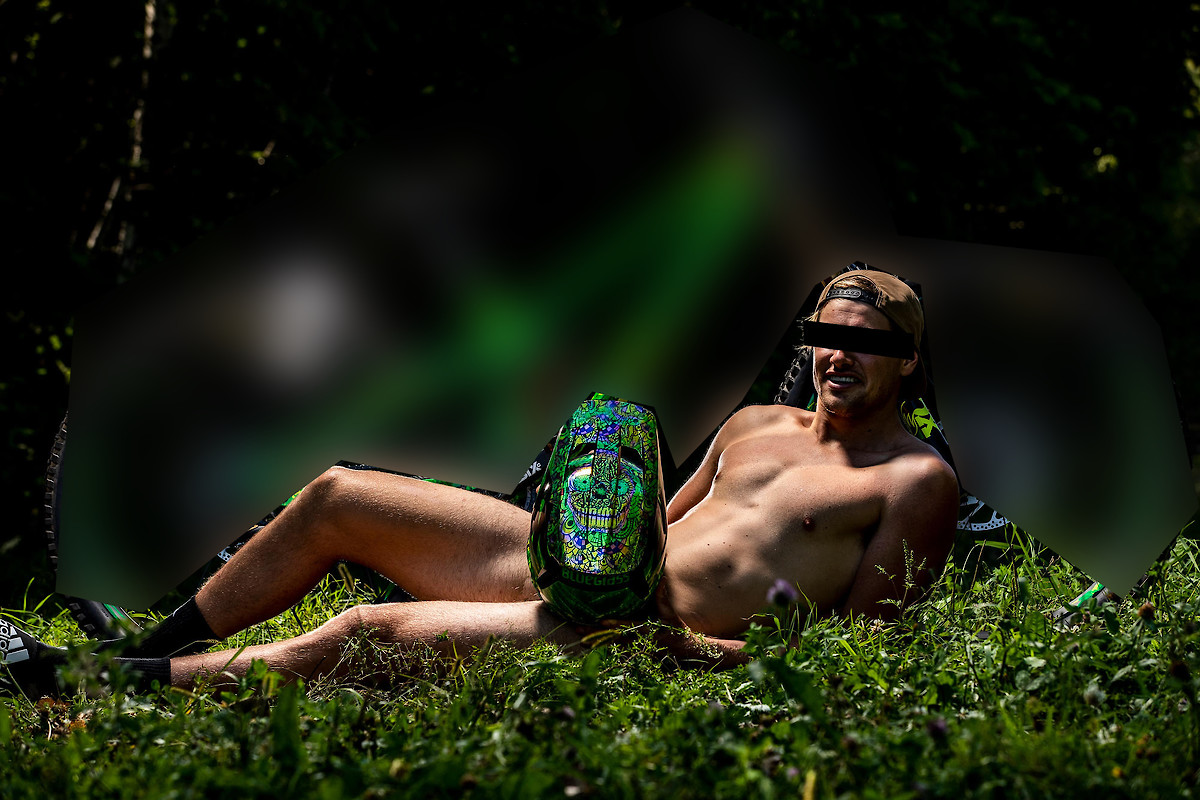 At the time of writing this, here is a list of countries where you WILL be able to watch on Red Bull TV as usual:

For @deanos_machineos ’ bike, we drew inspiration from his first Signature Goggle for SCOTT. With elements from his home nation’s colours and flora, we went with a fern inspired design that is sure to send the young Aussie down the hill in a flash. 🚲: @bikeonscott, @fox, @maxxistires, @trpcycling, @syncrosbike 🖌️: @hexisgraphics / @monkeyssauce #NOSHORTCUTS #SCOTTbikes #SCOTTgambler 📷: @svenmartinphoto

I am so crazy stocked to show you my world custom bike and kit. Inspired by my island spirit and my mechanic’s shirt, this combo is just insane. When your kid dream become reality, it’s just time to enjoy the moment and kill this world championship. Massive thanks to @bikeonscott and @monkeyssauce @hexisgraphics for this amazing work 🙏🏻. Shot by @svenmartinphoto @ridefoxbike @maxxistires @trpcycling @syncrosbike #custom #bike #scottgambler #tieanddye #idole

still seems like nbc sports via cable is the only way? i don't see it in the app w/ an option to pay.
sspomer

it did that last year too, but when it came to the race it wouldn't play. best get sky or sort out a vpn
iceman2058 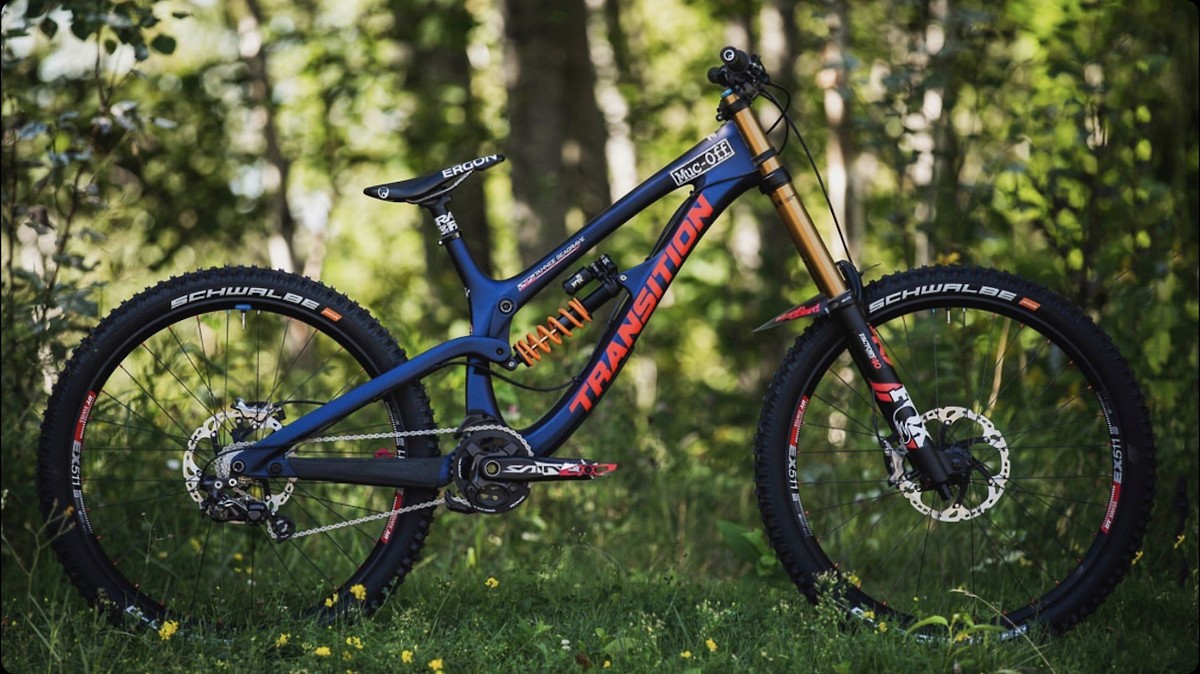