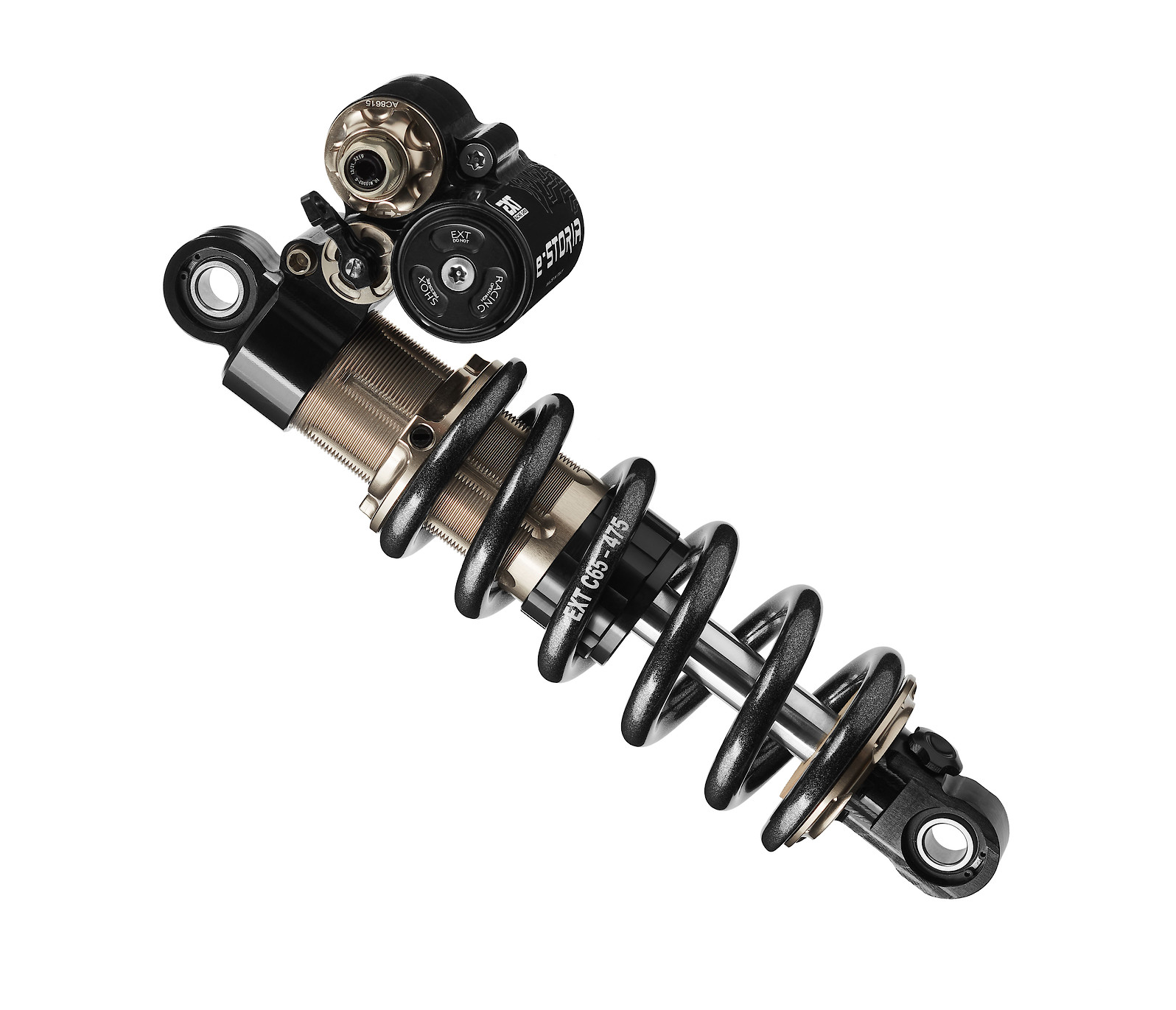 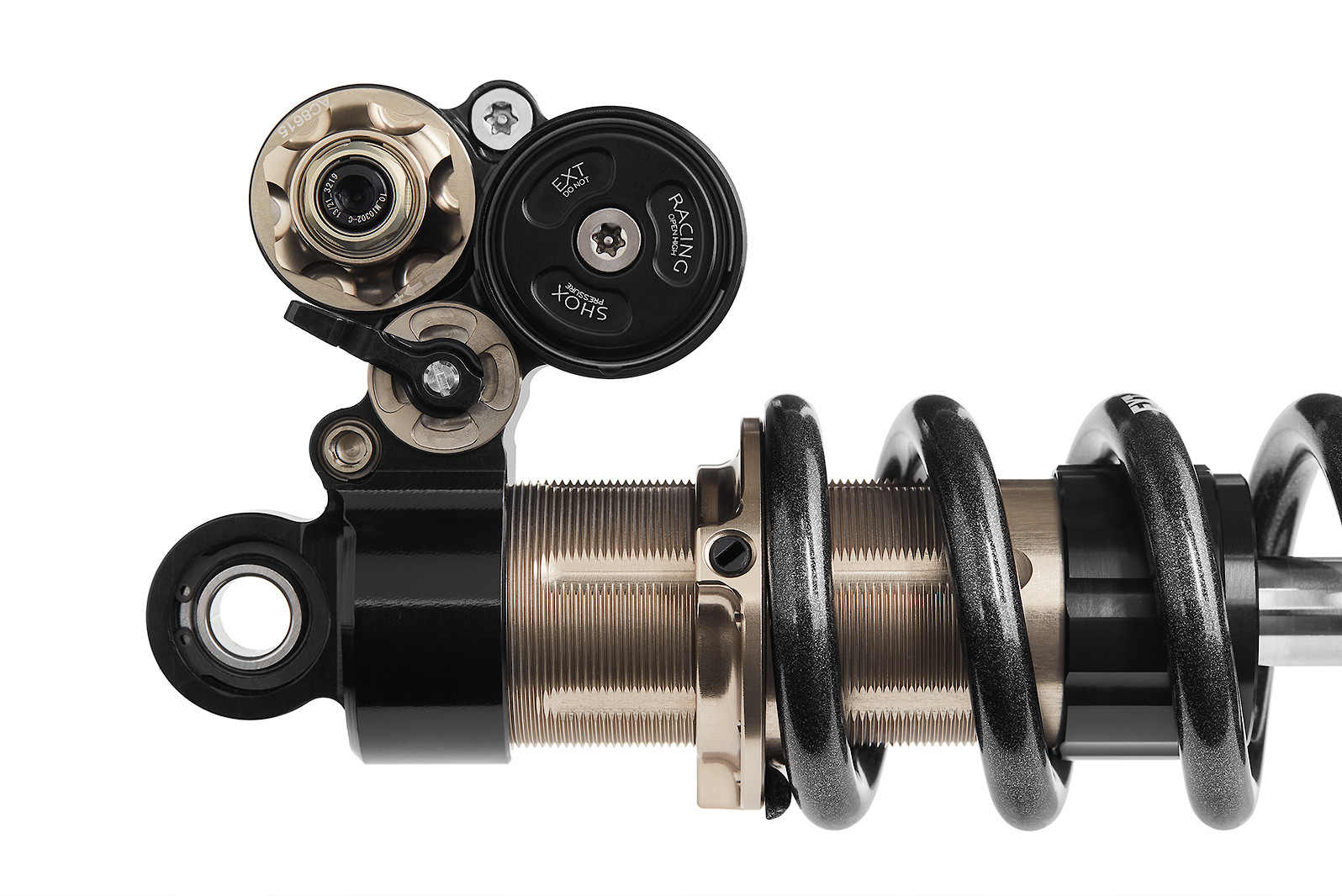 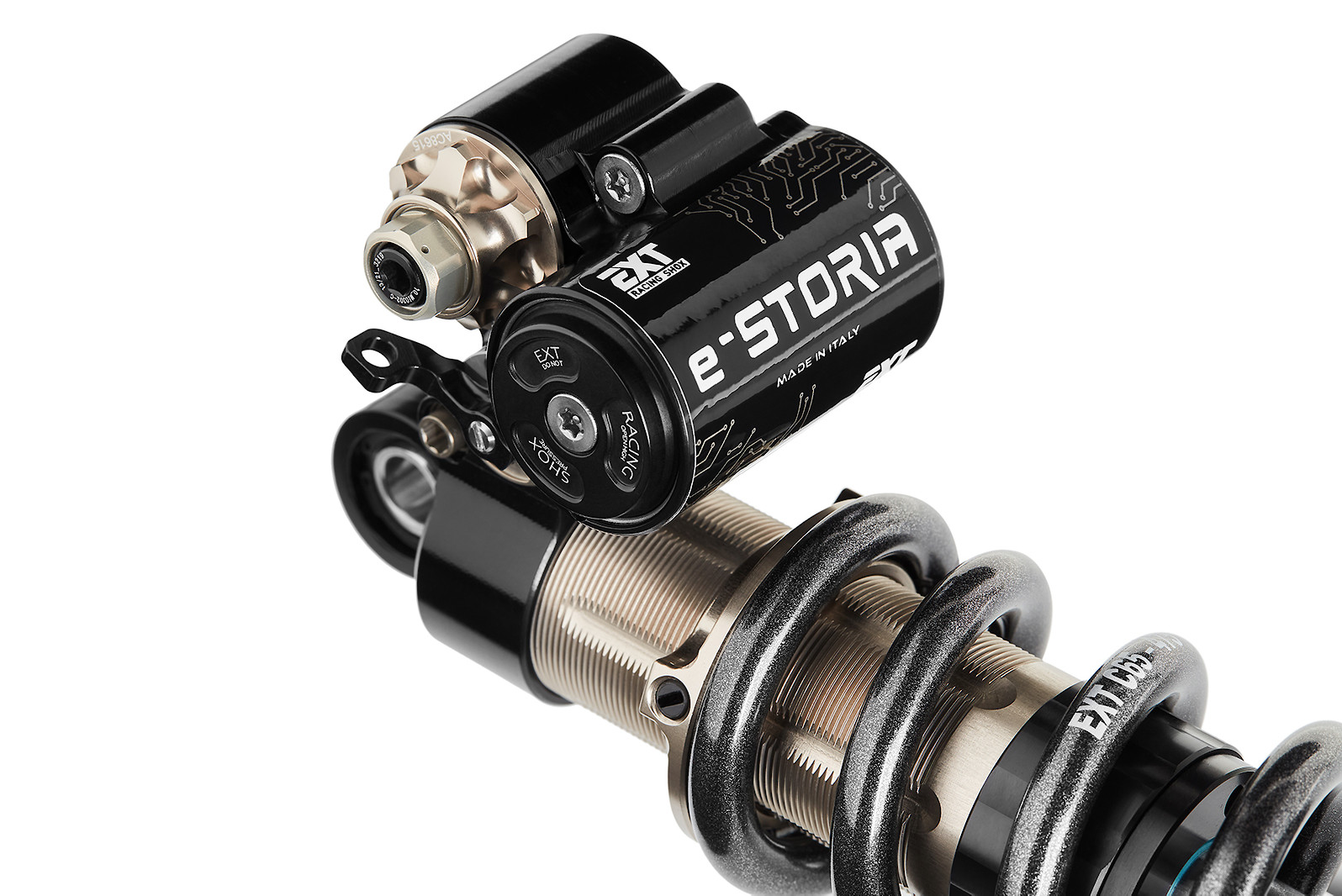 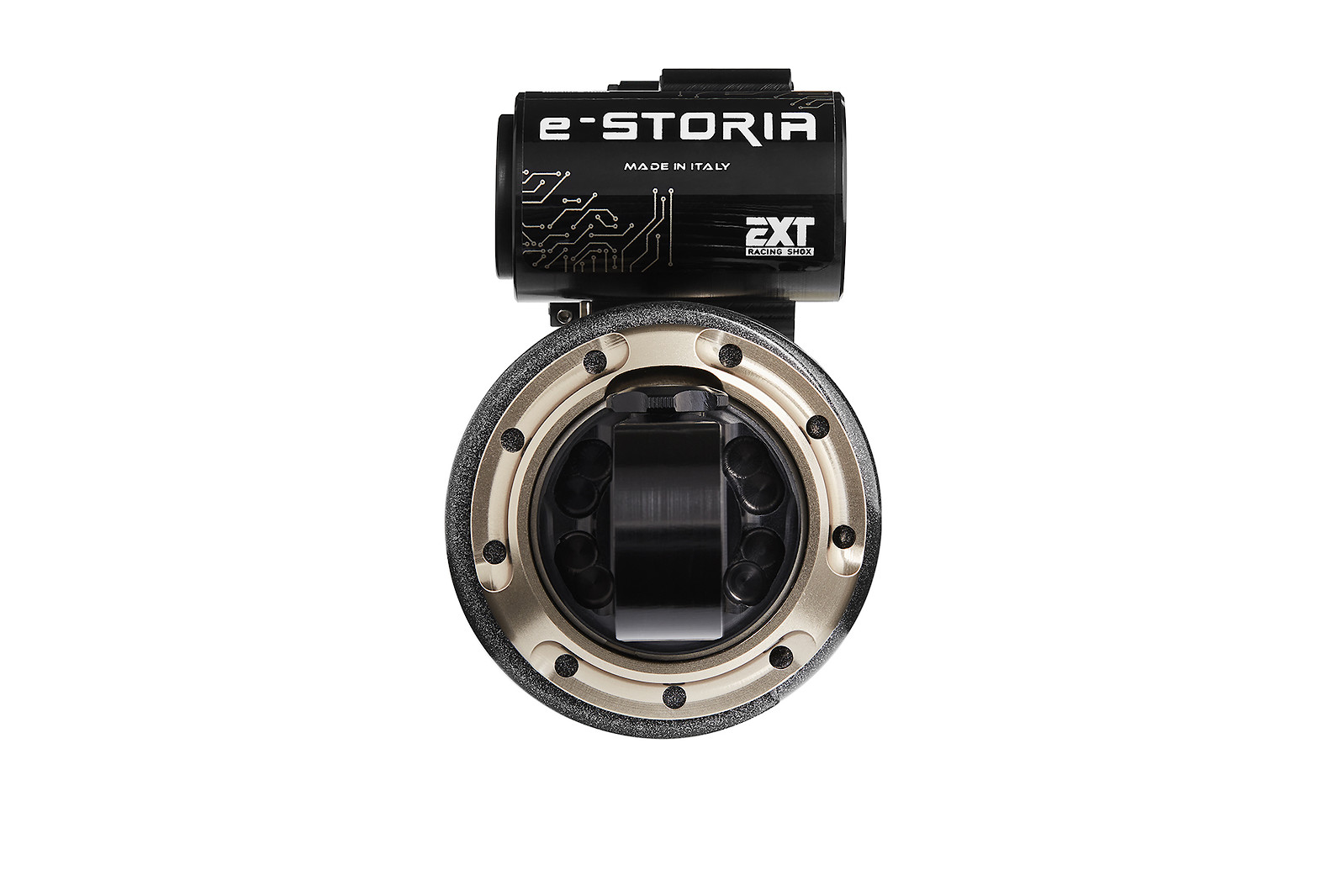 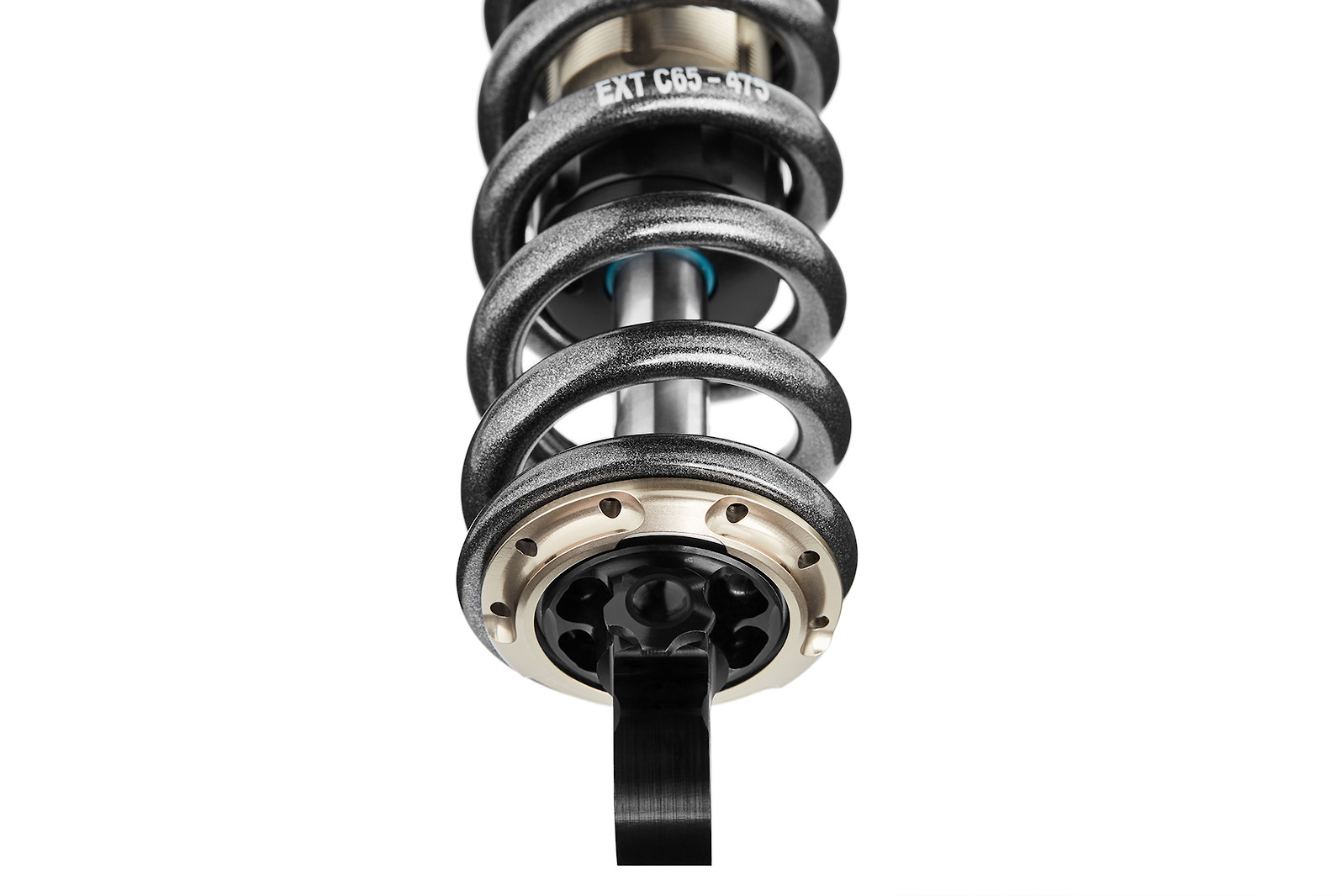 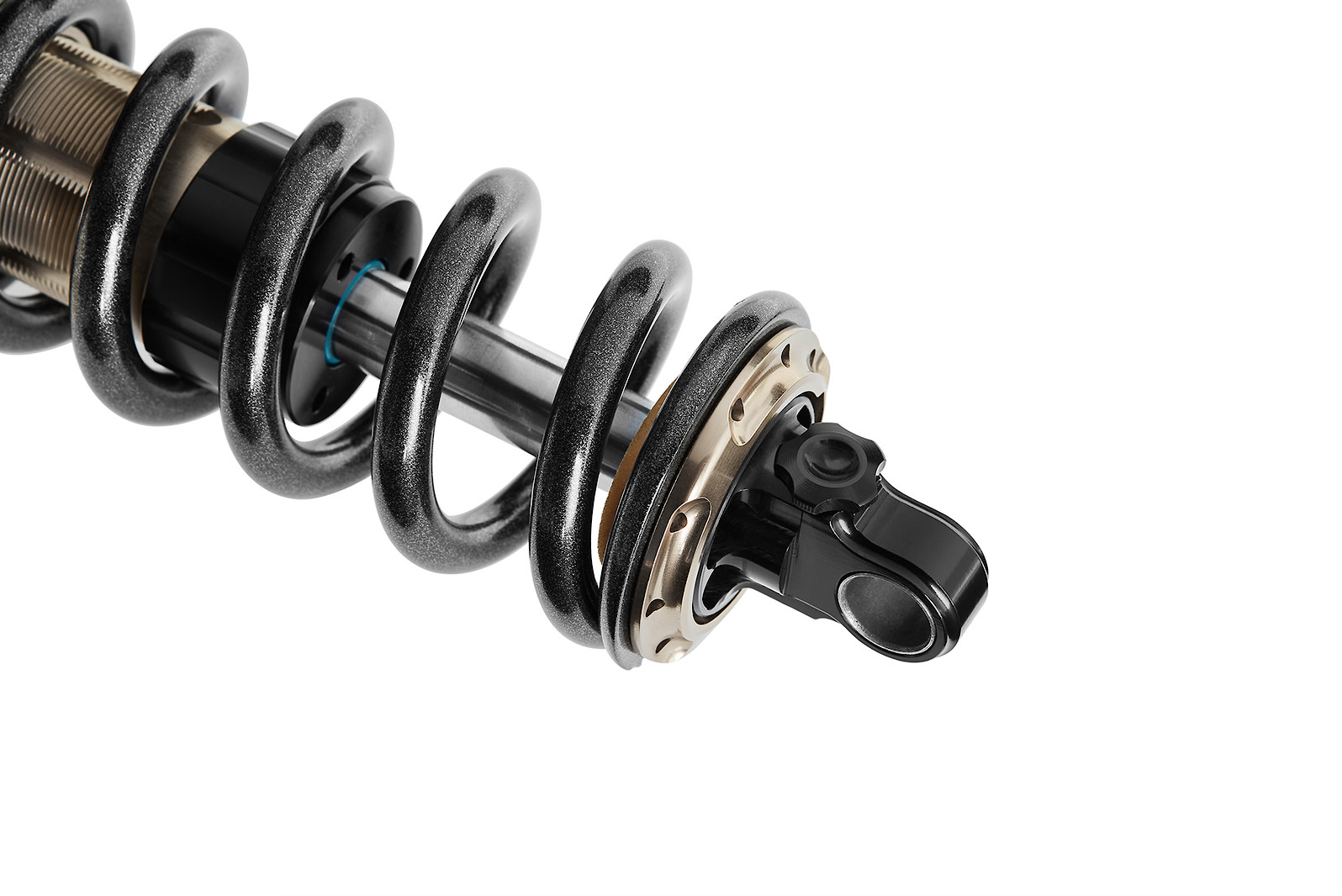 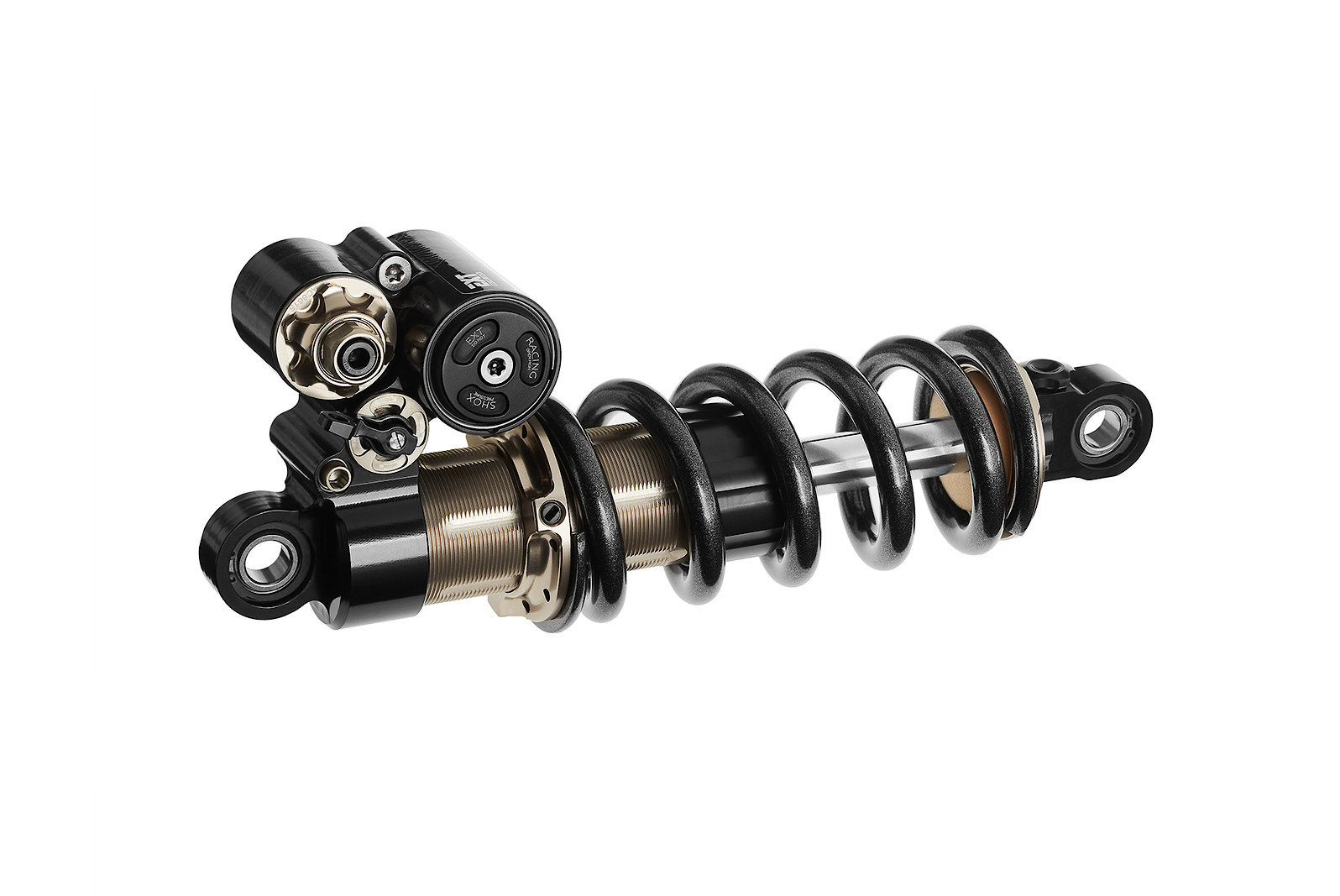 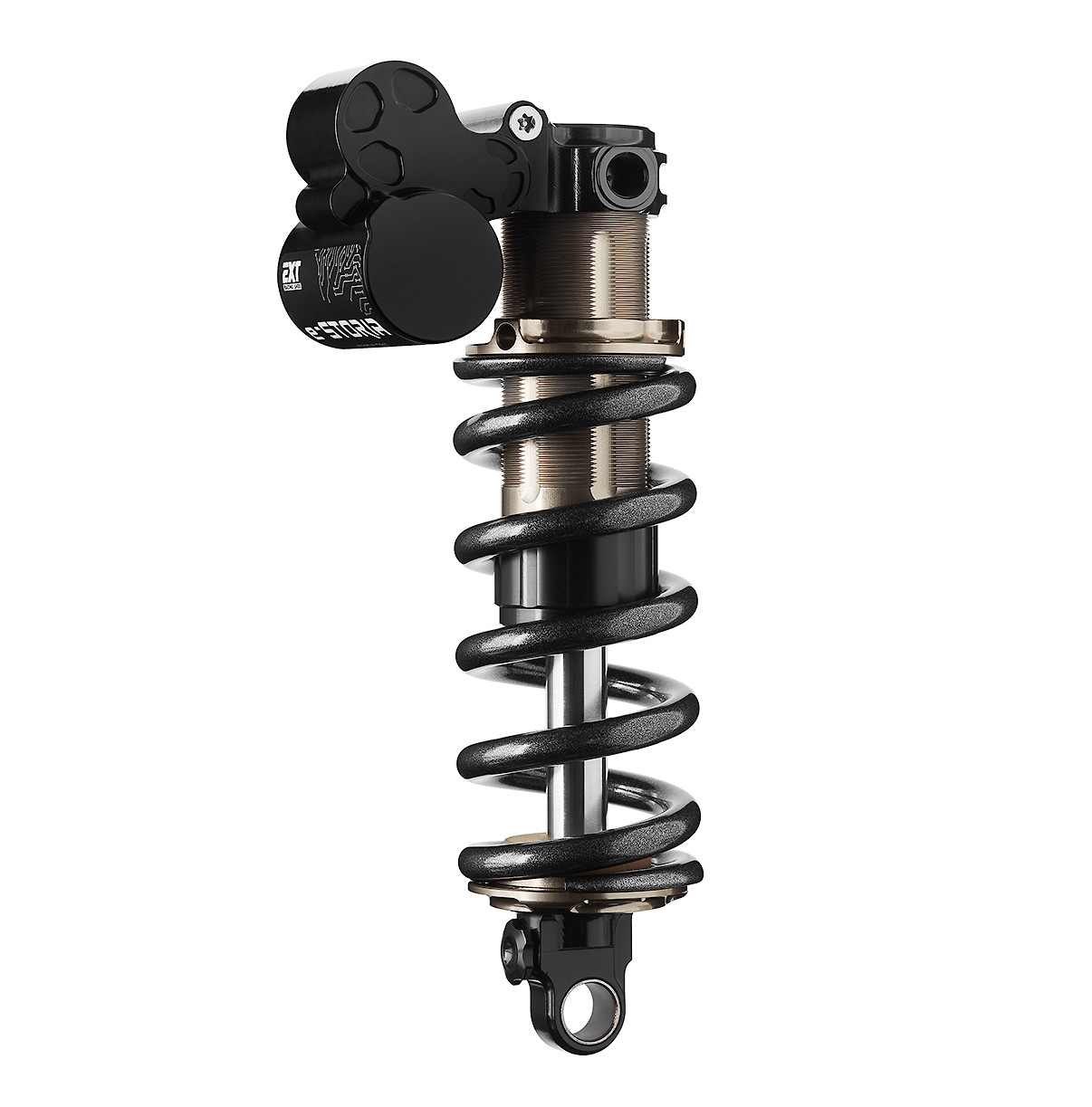 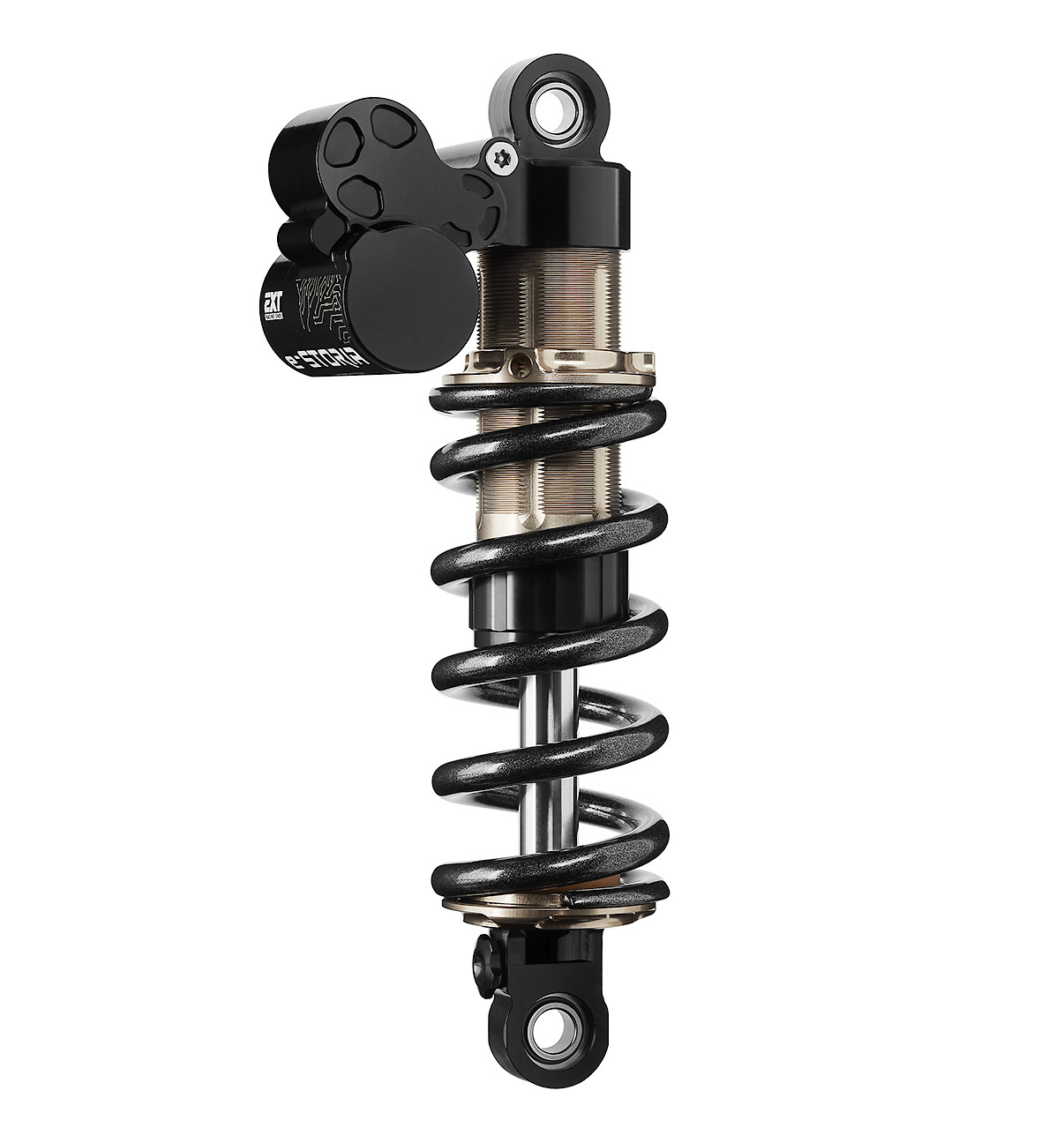 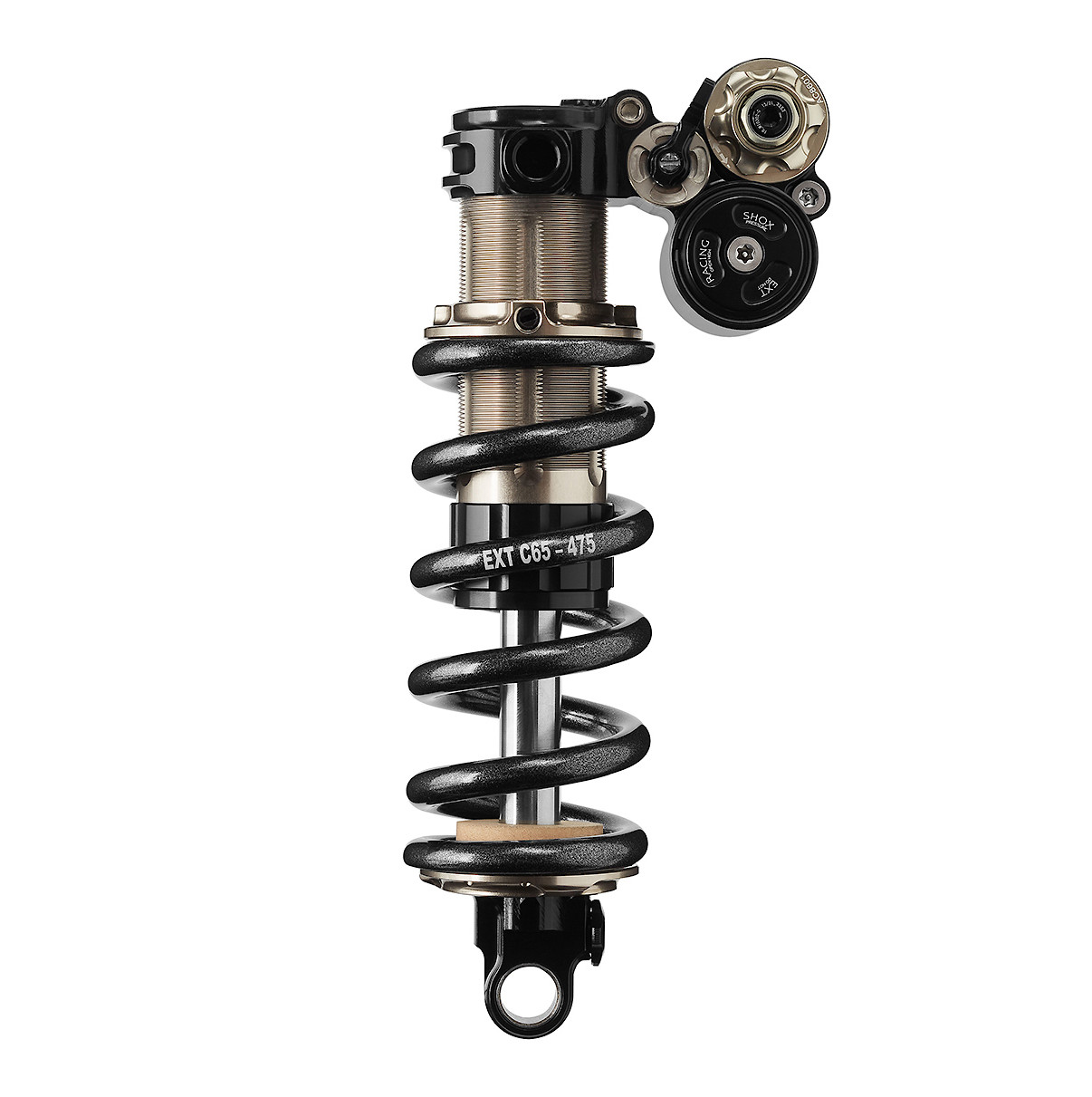 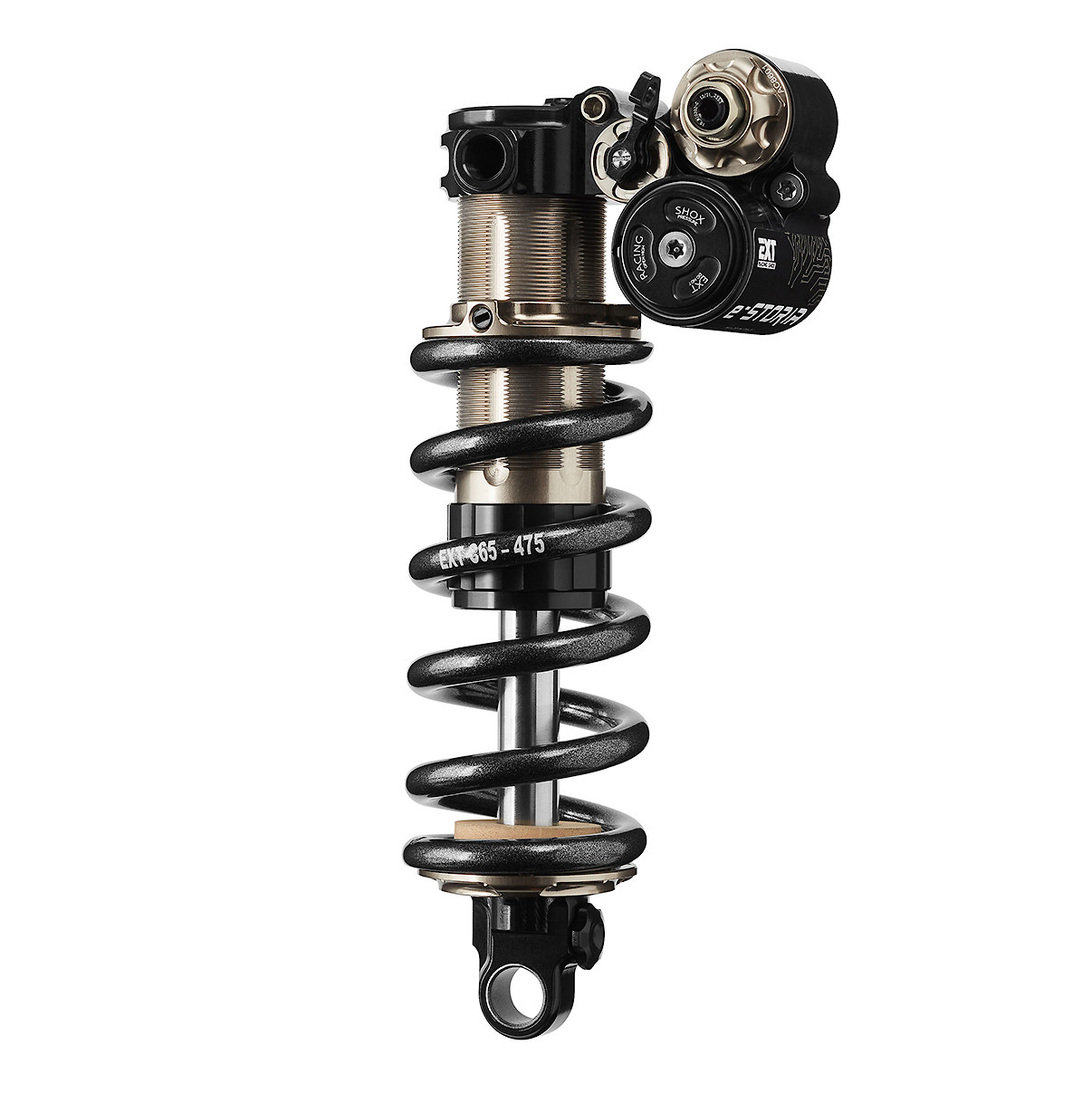 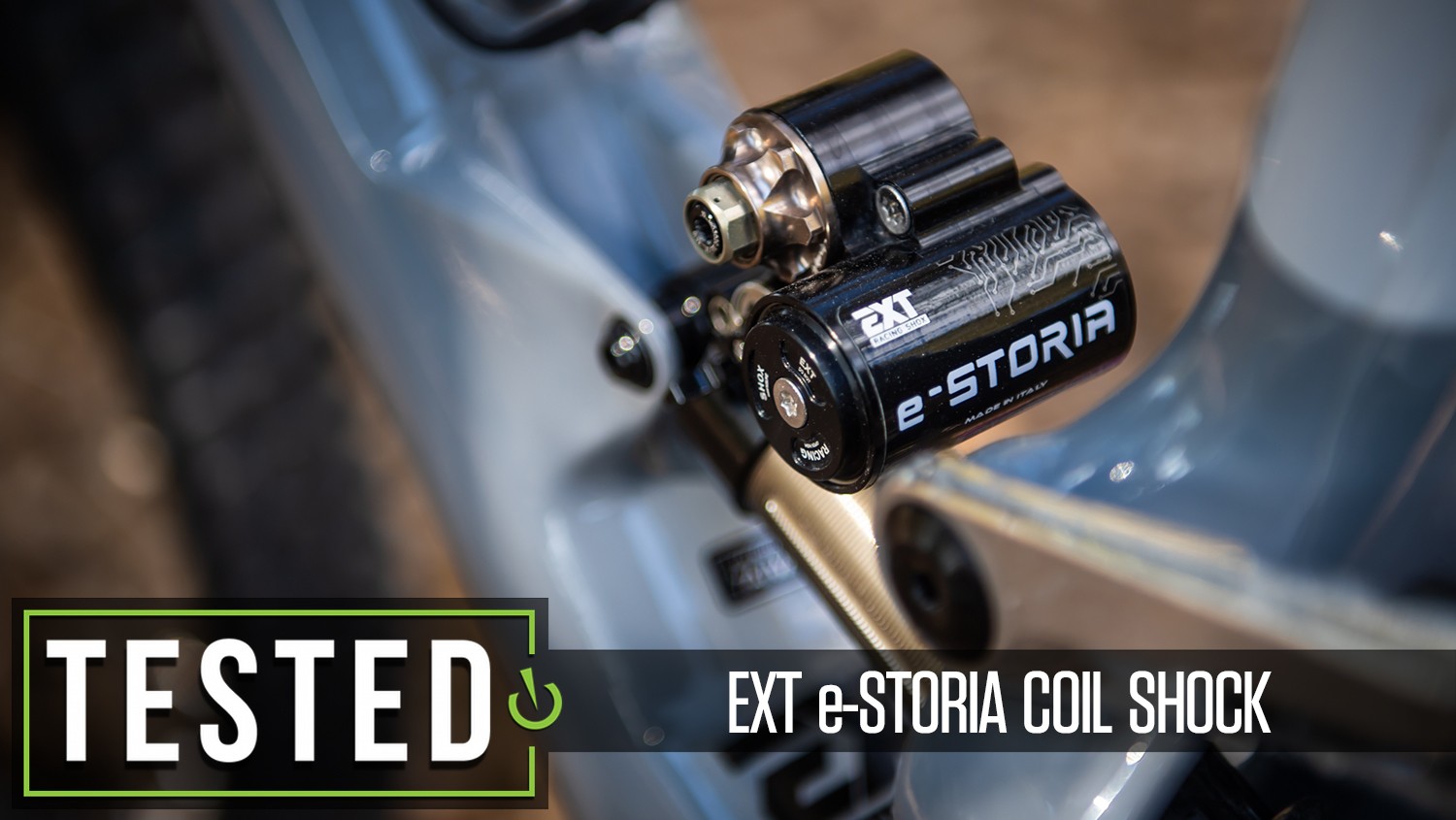 EXT has had its fair share of the spotlight over the last year, courtesy of their Storia V3 Lok and ERA V1 and V2 forks. With the inevitable and relentless rise of really good E-bikes, it was natural for EXT to look at providing purpose-built shocks for this segment, and for us bike nerds - to test it.

The E-Storia is a blend of tech inherited from the regular Storia and new, e-bike specific improvements. First and foremost the overall construction is much tougher, thanks to things like a bigger shaft made out of chromoly, a stronger nest for the spring and new, high viscosity index oil. Taking the shock out of the box you can really feel the racing heritage behind the product, much like with the original Storia. The box contains a shock with a spring installed and another spring should you need to tweak your spring rate or if you went a bit heavy on the burgers. 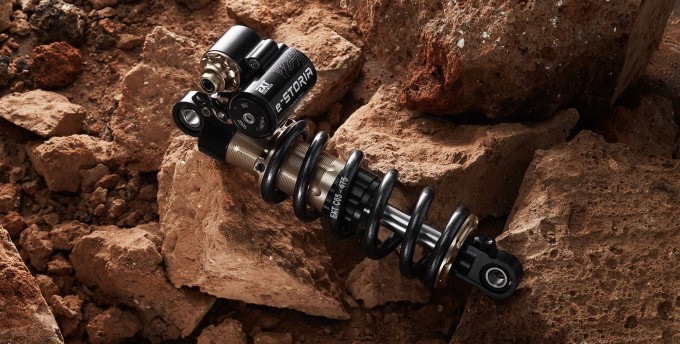 As expected with a custom, tailor-made product, ordering your shock will begin with a detailed form asking your dimensions, bike of choice and riding style. It is important to provide every detail you can, and take into account your usual riding gear as it can easily add 3-7 percent to your total “wet weight”.

Inside the box was a quality control checklist signed by one of EXT’s certified technicians, which is always a nice touch. Installing the shock on our first test bike, a 2022 Specialized Turbo Levo, was straightforward except that we made an error and ordered the wrong mounting hardware for the shock. A quick DU bushing installation solved that and we were good to go - but the first ride would prove a bit underwhelming.

We were hoping for a jaw dropping, eye watering, grin broadening experience. Sadly we didn't get it at first. Not that the e-Storia felt in any way bad nor cheap, it was just like any other OK-ish rear shock we had previously tested. We expected more.

After a few rides to get accustomed to the new bike the shock was bolted onto, we contacted the local EXT dealer for some professional advice. It was simple; “open up some compression damping and add a lot of HBC” and sure enough, that’s what we did. Oh boi (sic!) what a difference it made.

A few things we learned about the e-Storia shock from this experience:

Suddenly, the rear end of the bike became super planted to the ground and the grip went through the roof. We did use the travel more as the bike was a bit linear for a coil shock running less compression damping. After trying out some more tuning options, we opted for this (for a 75 kg rider without gear, and a 24kg bike):

With these settings locked in, we very much enjoyed the shock’s performance and how it contributed to the overall bike’s performance. The area where it improved it the most was small and medium-sized bumps. The shock worked in the correct range of the travel and stayed active no matter the speed or the roughness of the trail. In specific situations like long rock gardens or landings into chatter is where we had our minds blown away. The extra bike weight and the active nature of the e-Storia created a very planted rear end and these types of scenarios is where it was appreciated the most. We will note that somehow the active nature of the shock took some pop out of the bike, seemingly unrelated to rebound speed, as we consistently ran it on the faster side. 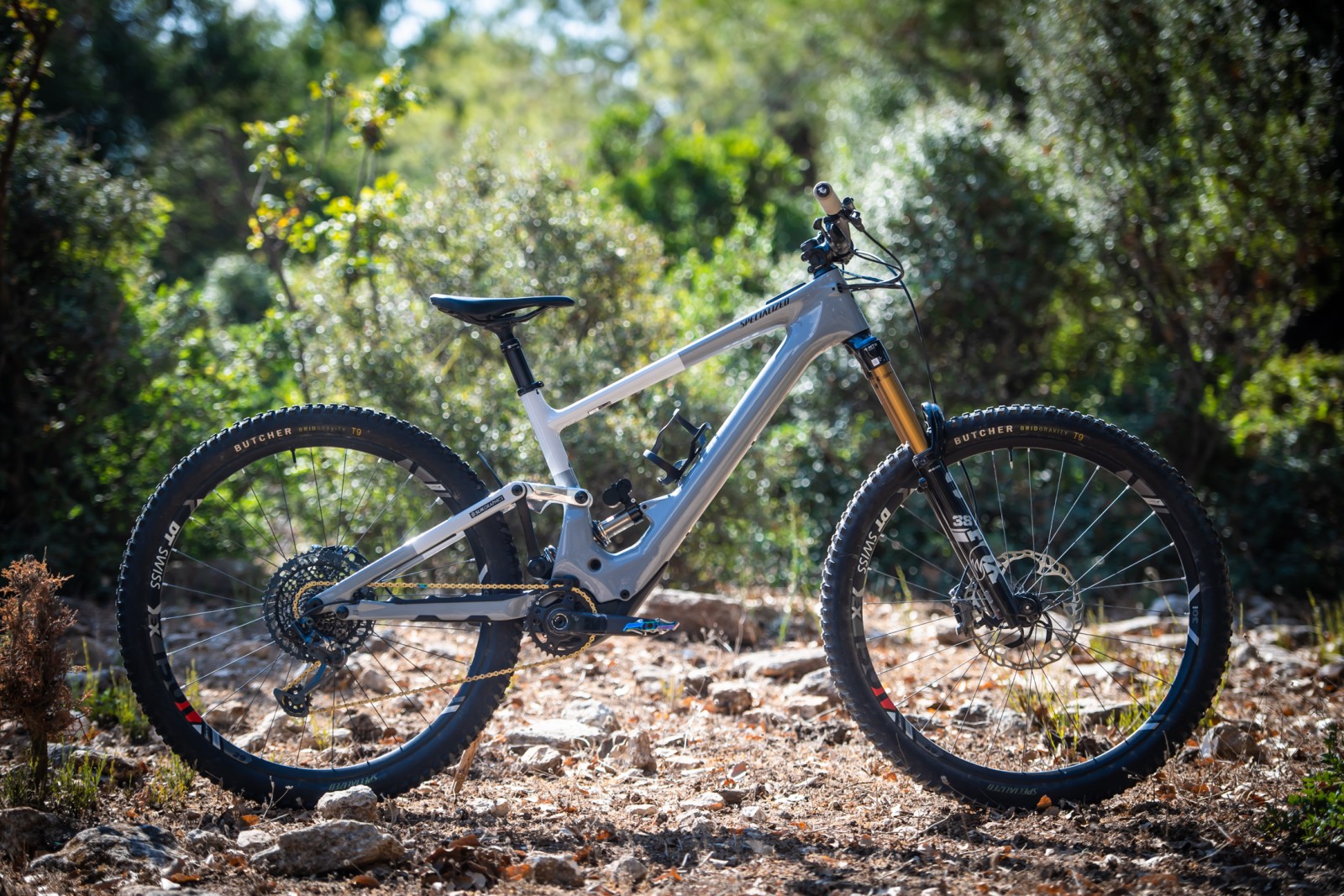 In the middle of the test, a late night web-scrolling session ended up with us trading in the Levo for Specialized’s Kenevo SL, a bike in the light e-Bike category. We sent back our shock to EXT for dimension changes. They used most of the existing shock parts and only changed the shock’s stroke and overall length. This is something that is probably not possible with the big manufacturers' shocks, and worth pointing out - the e-Storia is certainly an expensive shock but EXT stands behind the user experience and will go out of their way to ensure you get your money’s worth. As for us, we bolted on our refurbished shock and headed to the trails. 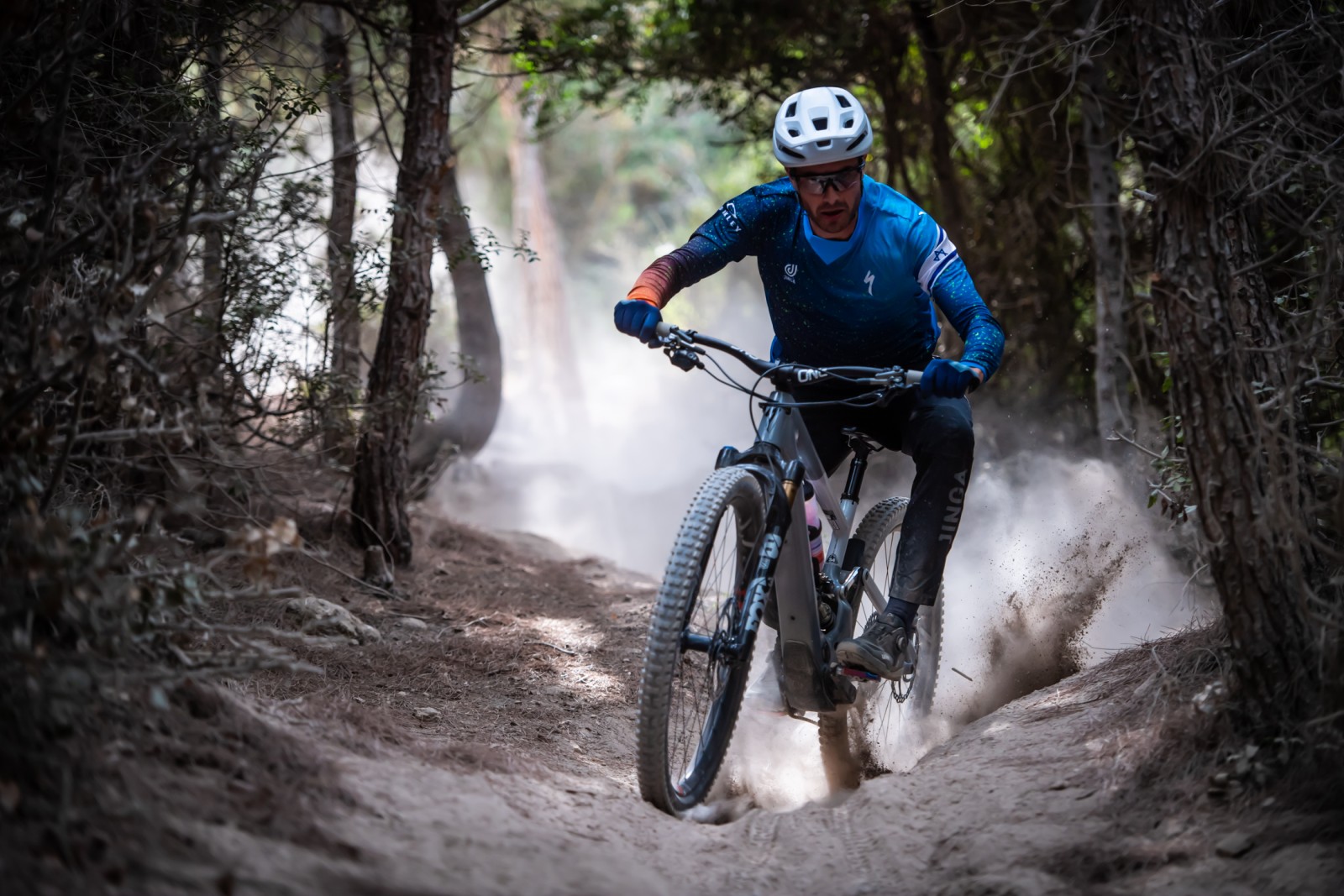 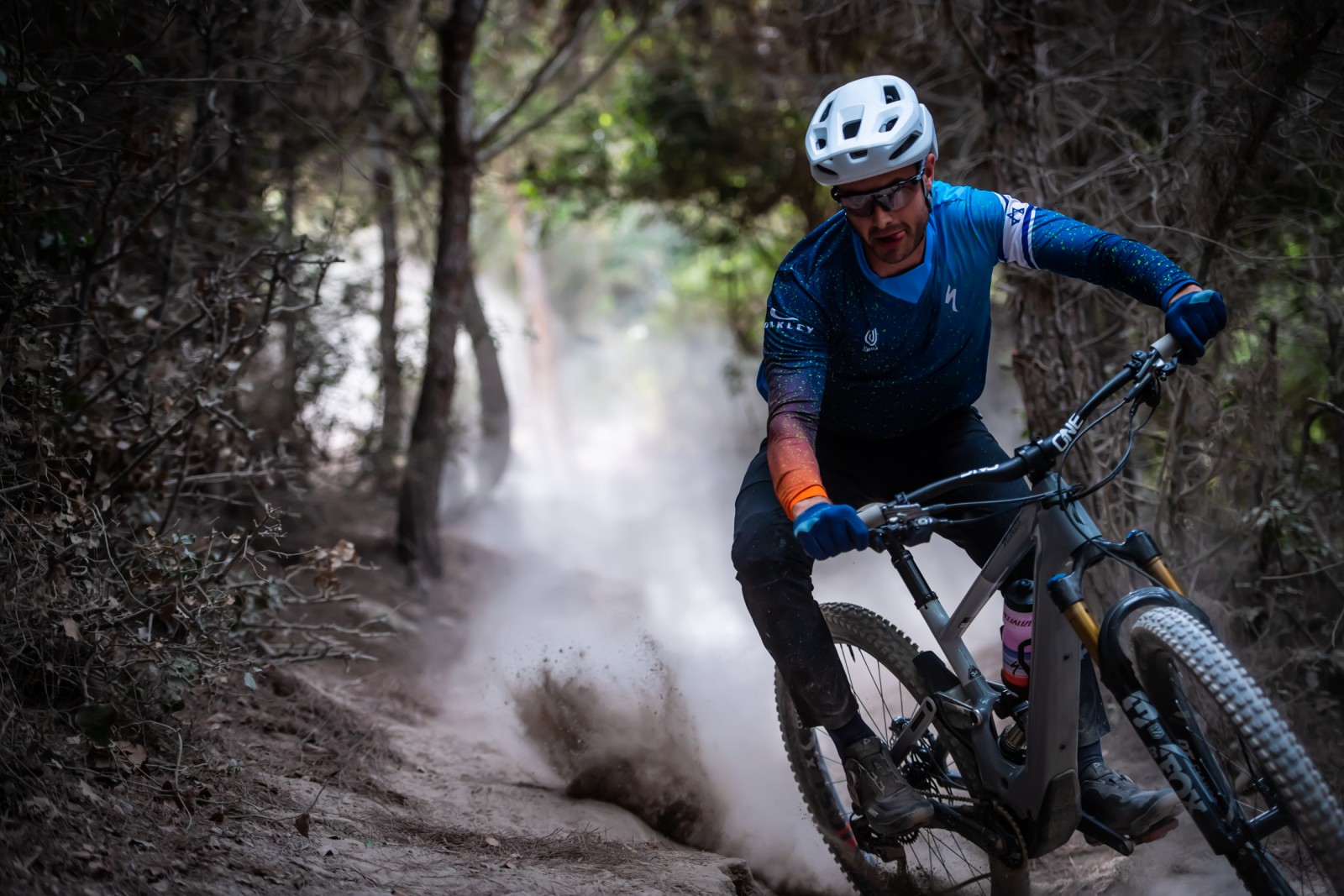 As we were now on a lighter bike (under 20kg) with more natural progression in the suspension, we initially felt less need to max out the HBC. However, the very confidence-inspiring frame of the Kenevo SL made us push the bike and shock to the limits, so eventually we maxed out the HBC on this bike as well. We were definitely going pretty fast by now though… 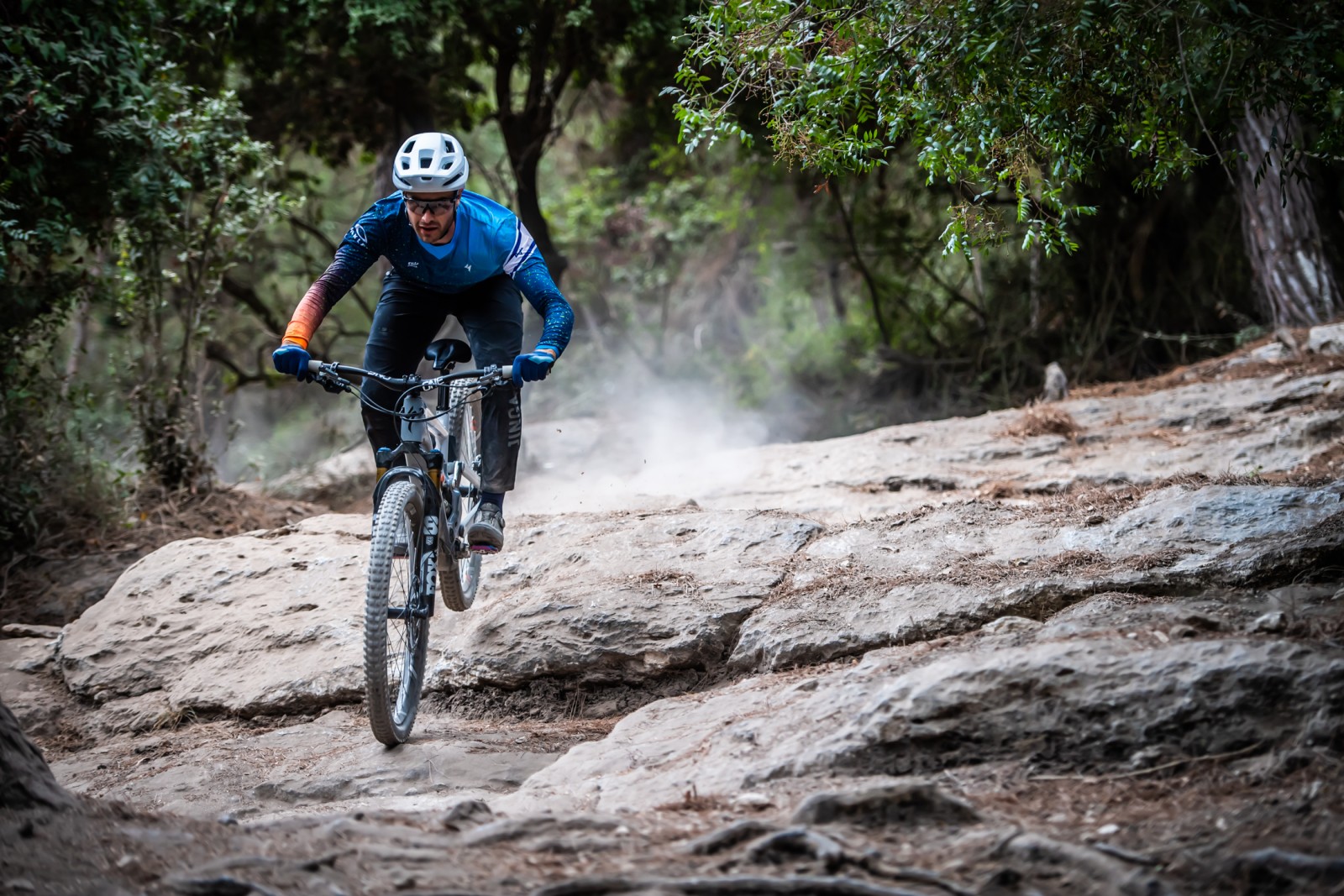 Bottom line: we could feel a big improvement in all aspects of suspension behavior compared to the air shock that came stock on the bike. Something to note on the out of the box settings: 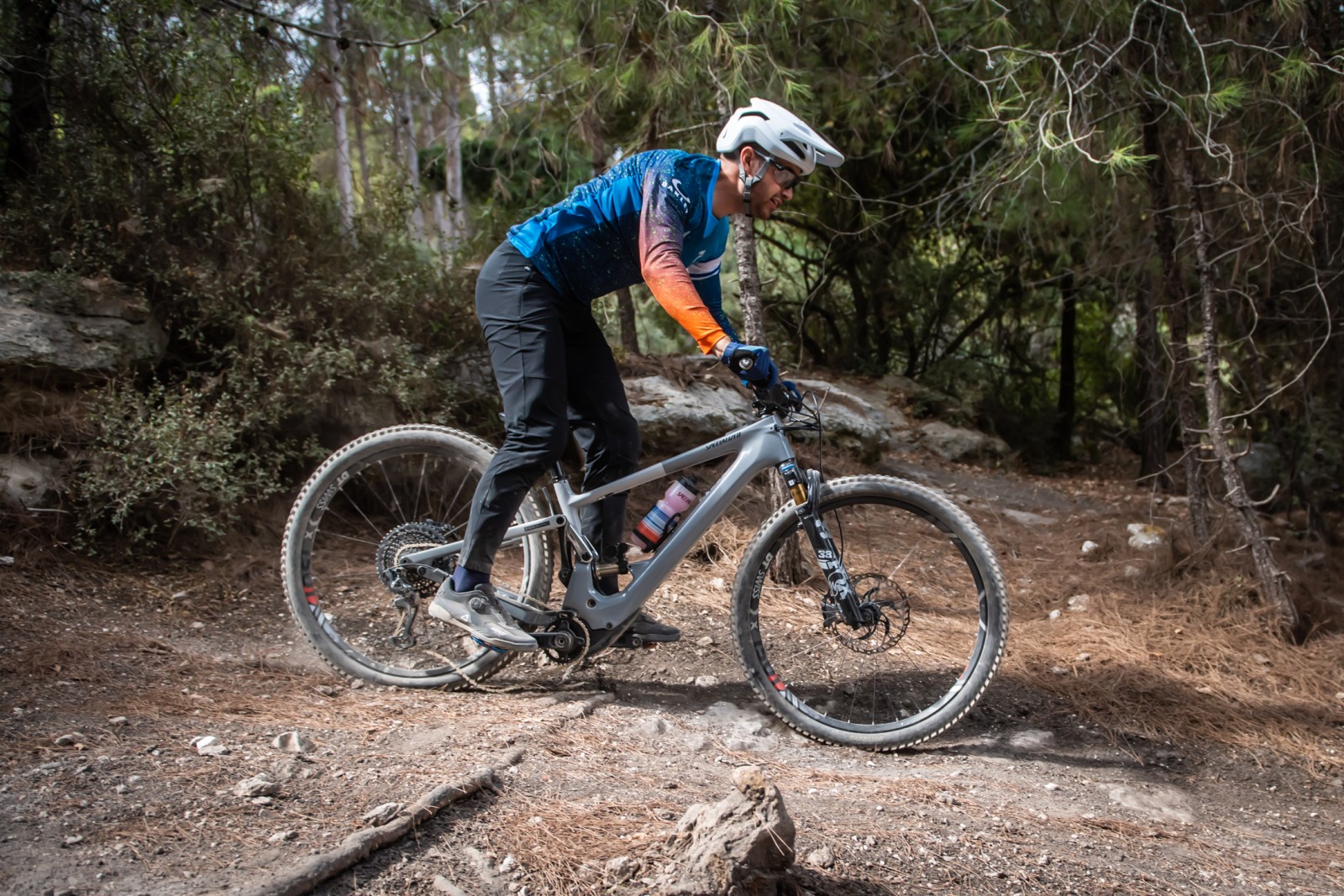 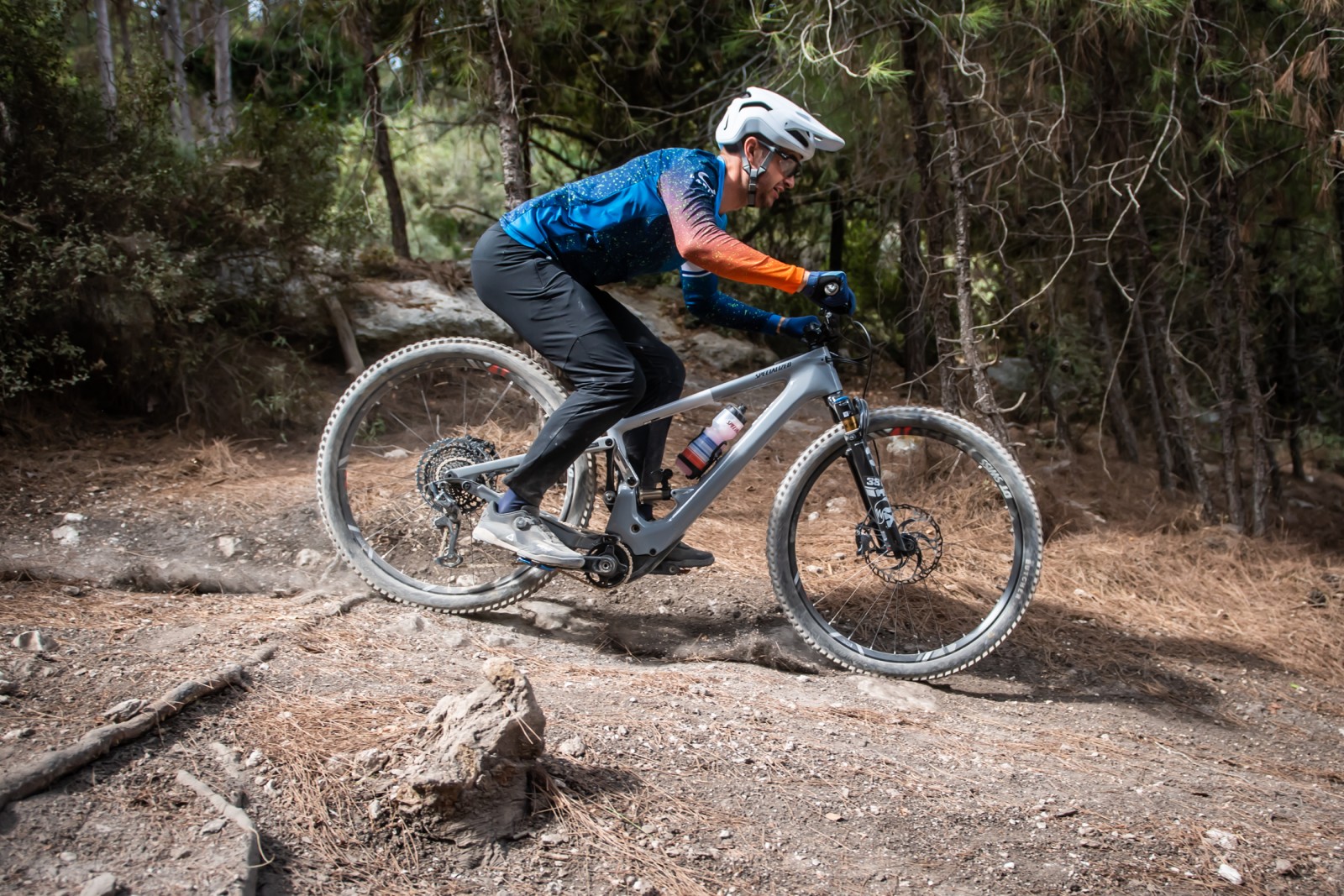 In the later part of the test, we rode a less powerful bike, where efficiency is more important. Here we found ourselves locking the shock a lot on uphills. The lockout did firm up the shock but not as much as we wanted. On other shocks we tested, the lockout really locked out the shock and most importantly kept the bike riding high in the travel for a better climbing position. With the e-Storia, the “lok” position was great for bumpy uphills where rear grip and some cushion is needed, but we’d like to have that setting available as a middle position, with a real lockout in the third position. 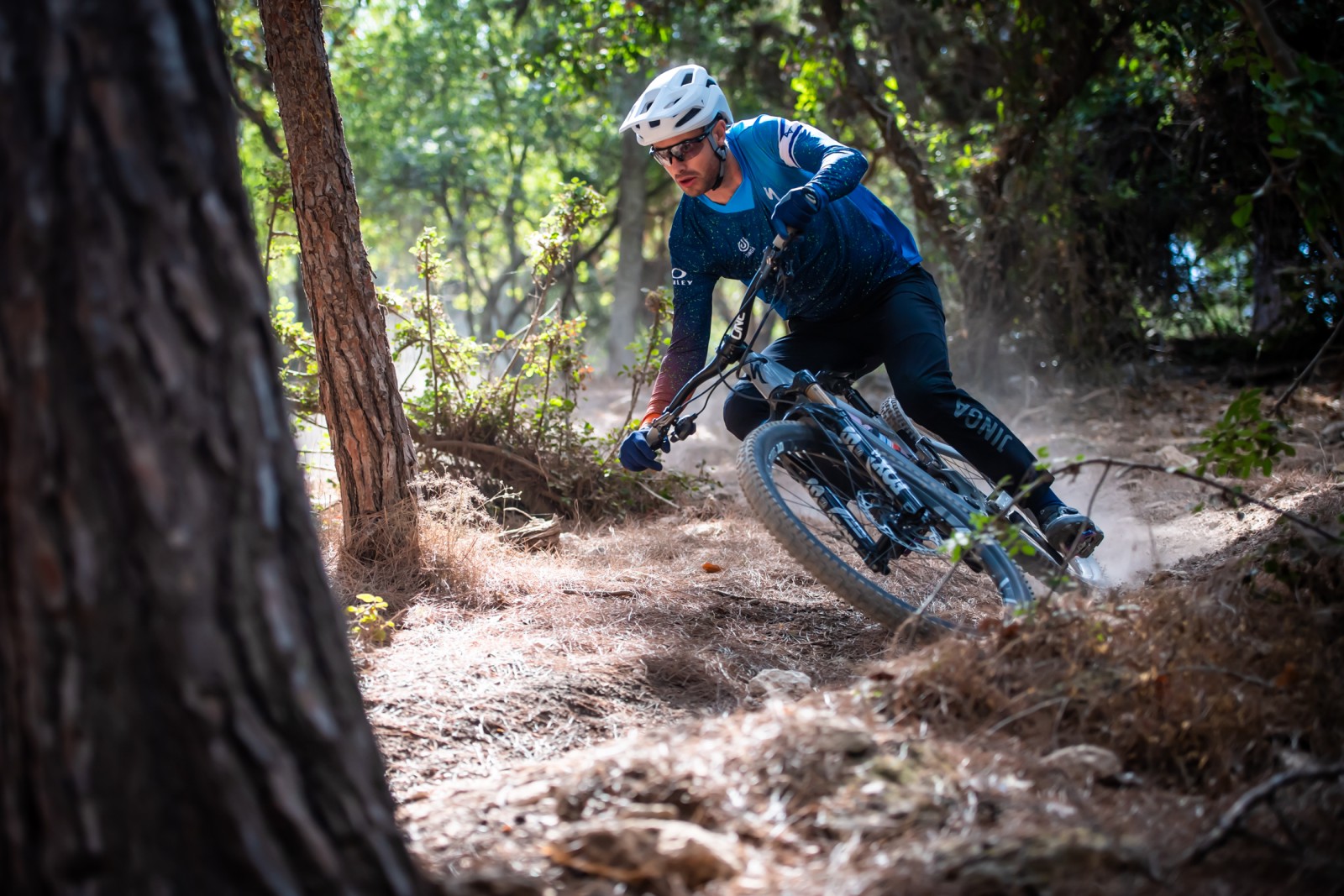 We are going to be picky here, because…well, a thousand bucks and then some…

As far as we understood, the HBC is an actual small piston that is being pushed into a cylinder during the last few portion of the stroke. We feel like it's not enough, we’d like more travel in it to create a better transition and more usability, as we tend to run it fully closed most of the time, even on a progressive frame.

After 25 hours of riding, the rear eyelet screwed out of the shaft and we couldn't ride the bike. It was fixed quite quickly but was unfortunate and unexpected from a top of the line product. Sadly, it happened again later in the test, and was then permanently fixed during the size change for our new bike. Weirdly enough, it is a problem that we are hearing of on other high-end shocks as well, which leaves us wondering if a one piece shaft and eyelet is something that can solve this unwanted problem.

The spring can rub against the body of the shock and it makes some unwanted noise. If you spin the spring it goes away but we want it away, all the time.

And a final observation: please make the graphics laser etched on the shock. The stickers just feel out of place on such an expensive item (this is something we’ve noted in past reviews of other high-end shocks as well). 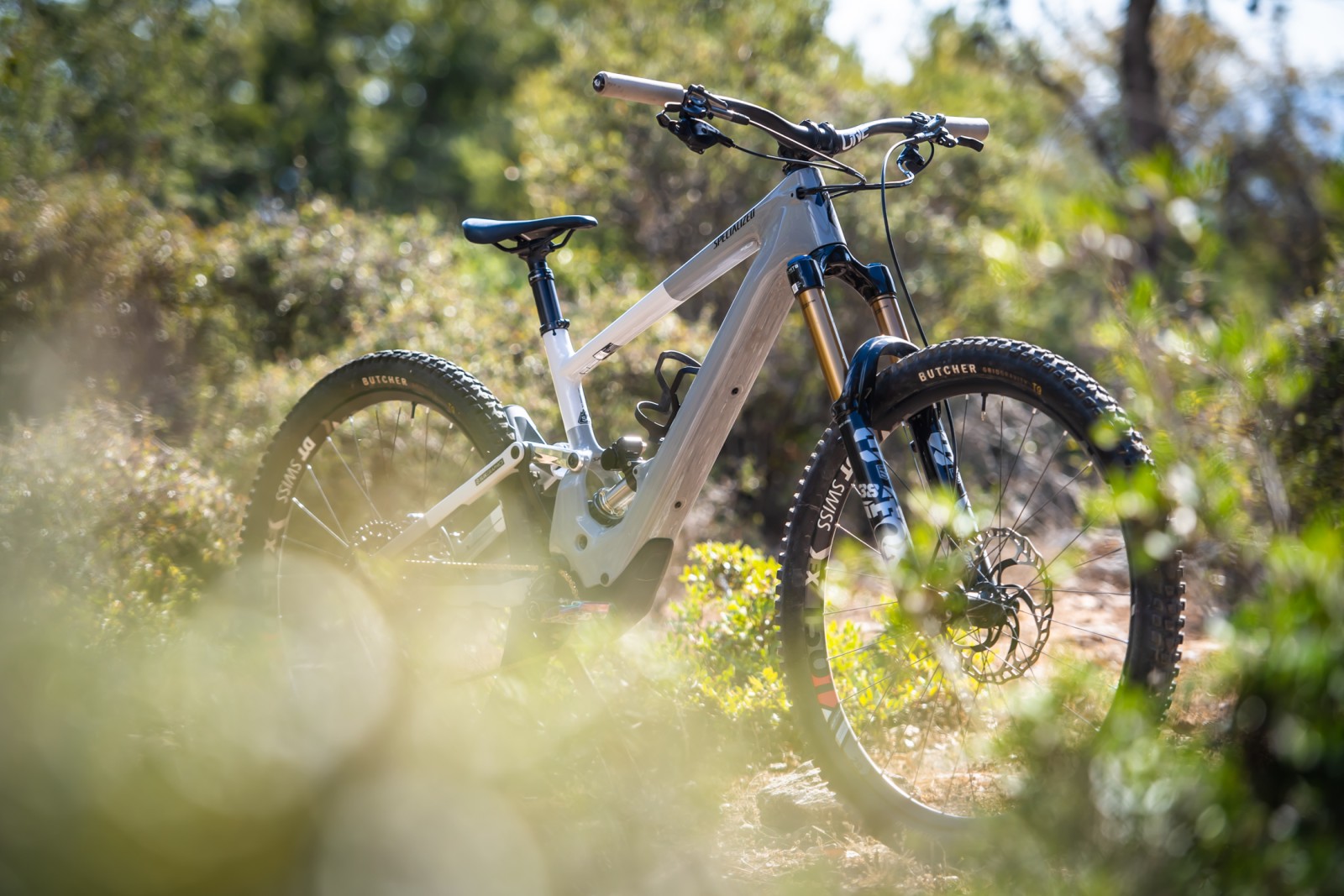 Besides the unfortunate problem we had with the shock eyelet working itself loose in the first part of our test, the updated and rebuilt shock still performs well in all situations, and the settings do not change over time. We’re also running a regular Storia shock on another long-term test bike, which has performed well over a long period of time, so we’d expect a good ownership experience going forward with the e-Storia.

EXT did take a step forward with the introduction of the e-Storia to the market. The planted feel we’ve enjoyed with the regular Storia has been maintained while more tuning features were added. The probable first question that comes to mind before purchasing this shock would be: “will this shock make my e-bike better?” The short answer is “YES.”

The long answer is “Yes, but you’ll have to take the time to set it right, otherwise you may well feel underwhelmed from the out of the box performance relative to your expectations.”

Our star rating reflects the issues we had with the eyelet working itself loose in the first part of the test. We give the e-Storia 5 stars for performance, while the eyelet issue keeps the overall score down for now. We may come back to revise this rating in the future if the problem does not come back on our updated shock.

For more information, head on over to www.extusa.bike or www.extremeshox.com.

Yonatan is a born racer and a bike addict. As a true competitor the only thing on his mind when lining up in the start gate is the finish line. With a background in local enduro and DH races and even the occasional appearance in an Enduro World Series on his resume, Yonatan has more recently applied himself to building bigger legs and trying his luck racing XC as well. Throughout the week he’ll be manning the spanners at the bike shop, reading about new stuff on the internet, and thinking about how to improve everything he rides. Yonatan’s riding style is fully pinned, smooth, and quiet but he can be nasty to his bike when needed. 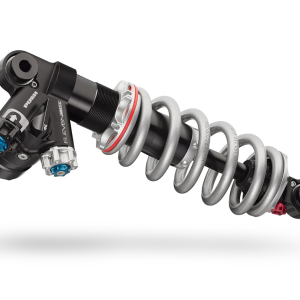 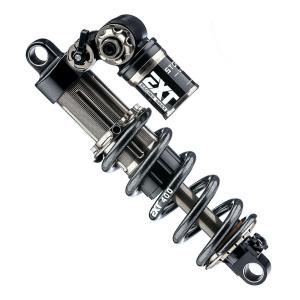 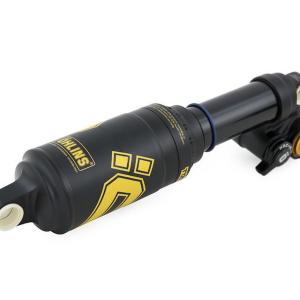 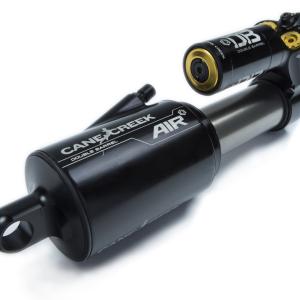 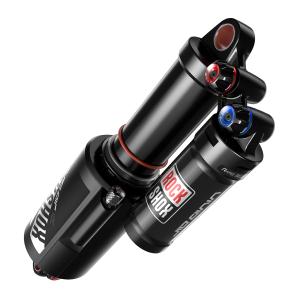 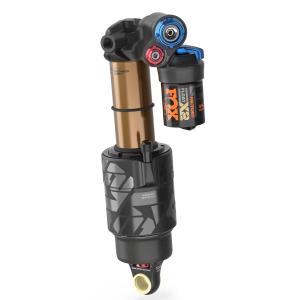 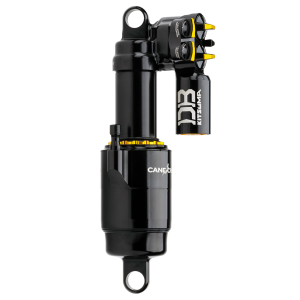