The Technical Wizards at Transition Bikes are on a mission to educate riders about proper mountain bike fit and function. This "Get Dialed" article will help you decipher those pesky millimeters and angles and how they translate to your experience on the trail. 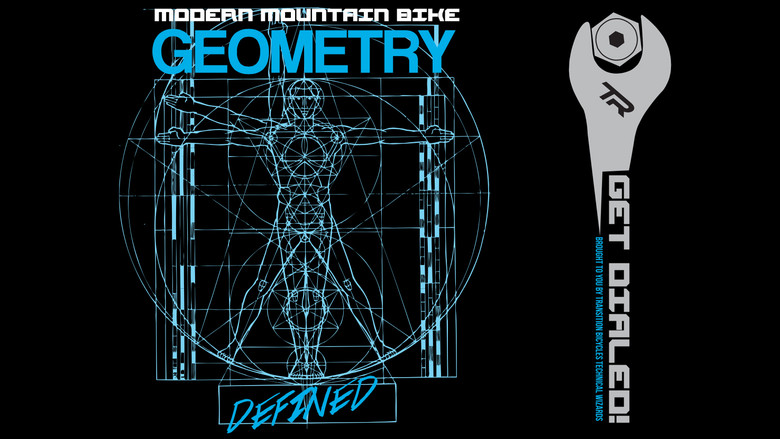 Bike geometry can be complicated. It's nearly impossible to know everything about how a bike will ride based on looking at these numbers alone (not to mention these numbers tell you nothing about how the suspension itself will function). But we hear it being done all too often - and to be fair, we do it too. Problems arise when riders focus on just a few of these numbers instead of how they all relate to one another.

There are no right answers here. We're opinionated about this stuff and we'll let you know it. In the end, there are preferences and our hope is that this article provides the grounds for a more informed discussion of bike geometry. We're going to keep it pretty basic, and some of you might find a lot of the topic a little too 101. But we frequently come across pretty educated riders who haven't fully considered some of this stuff. Even in the basics you might come across a few new ideas. We hope it makes you think more about all of the details in your bikes geometry - we think about it a lot.

We'll start with a topic that we see people confused about all the time.... 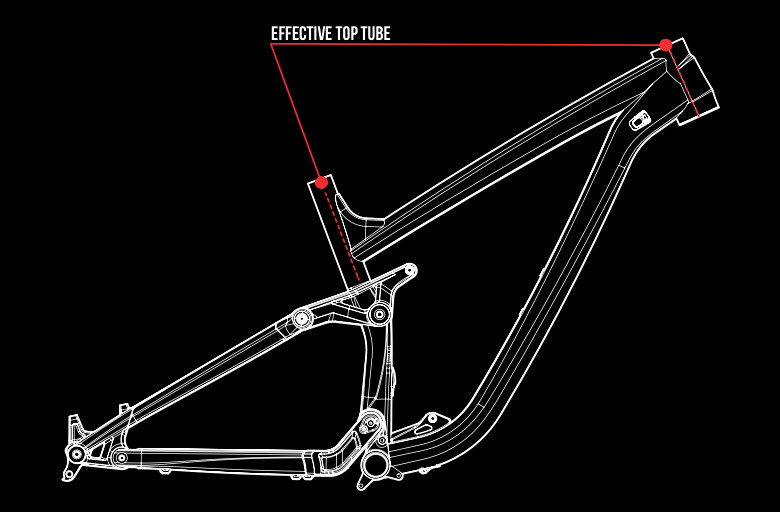 Effective Top Tube (ETT) is a traditional way to measure a bike's length. It measures a horizontal line, parallel to the ground, from the center of the head tube to the intersection with the seat tube or seat post. This number is useful for identifying how long a bike will feel while in a seated position. 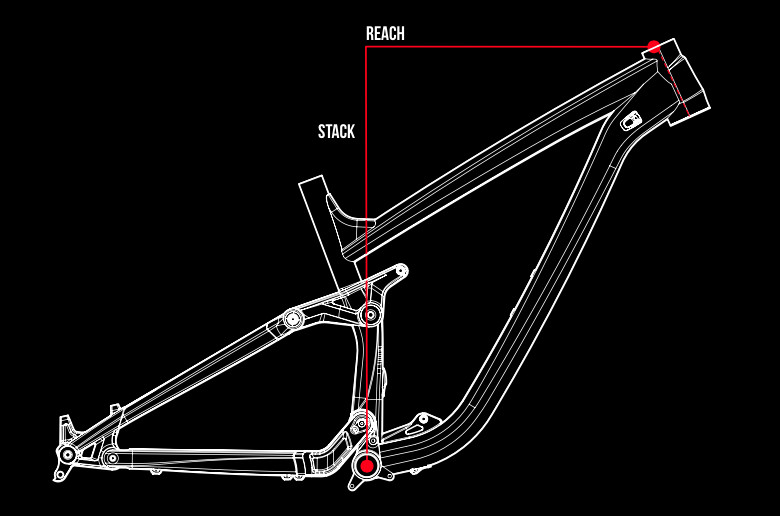 Reach is newer way to measure a bike's length. It uses the same horizontal line as the Effective Top Tube, but instead of measuring from the head tube to the seat post, it measures from the head tube to a vertical line that runs perpendicular through the center of the bottom bracket shell to the ground. This measurement identifies how long a bike will feel while standing.

So Reach measures your cockpit anytime you're standing and Effective Top Tube measures your cockpit only while seated with your saddle at a specific height. They're both telling numbers and it's worth considering them together, but we put a lot of emphasis on Reach these days. Any time we're riding aggressively, we're out of the saddle, so it follows that this number is going to have a greater overall impact on the "handling" characteristics that define the modern trail or all mountain rider.

One of the most common problems we see is over-emphasis on Effective Top Tube length. As a whole, bikes tend to be getting longer front ends these days. But that can be done with a longer ETT, a longer Reach, or a combination of both. Riders who look only at Effective Top Tube without considering Reach may be selling themselves short, literally. That's because seat angle has a huge effect on ETT, but zero effect on Reach. Watch what happens when we make the seat angle slacker: 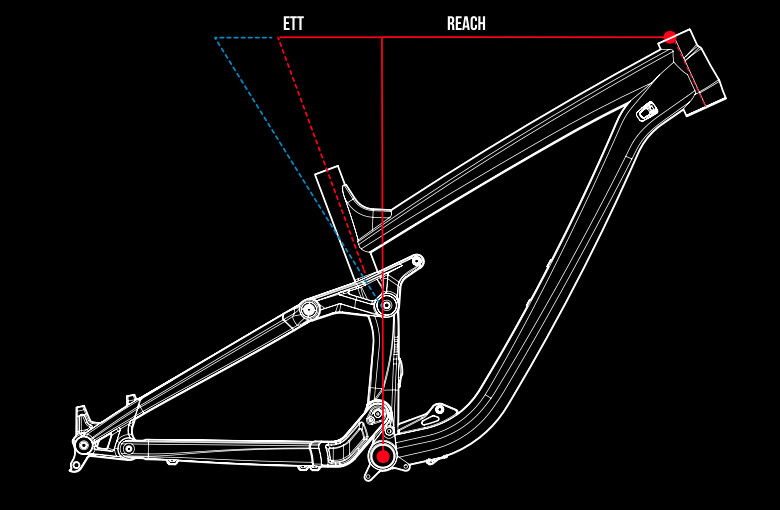 The Effective Top Tube is now longer, but the Reach has remained the same. Or to look at that in another way, it's not hard to imagine a scenario where the Effective Top Tube of 'Bike A' is the same as 'Bike B', but the Reach of 'Bike A' is actually shorter than 'Bike B' because 'Bike A' has a slacker seat angle. This happens; a lot. In these cases, Bike A may fit great while seated, but while standing, the cockpit length is too short and the rider doesn't have enough room to move around or find the bike's sweet spot.

The slack seat angle that afforded the rider adequate seated top tube length does nothing to help the rider move around on the bike while in a standing position. It has other effects as well. The rider's seated weight will be further over the bike's rear axle, making the rider work harder to keep the front wheel on the ground while climbing and harder to effectively transfer power to the cranks. The taller the rider/seat post, the more dramatic this effect will be because the seat itself keeps moving rearward as the saddle height is raised. So rather than slacken the seat angle to increase a bike's Effective Top Tube, why not increase the Reach? Proper position while seated and standing.

Another problem with ETT as a whole is that, because it's influenced by seat angle, the actual feel that a listed ETT provides will vary from one rider to the next depending on how high they run their saddle, even on the same frame. Reach is more constant. Consider a rider who is 6' tall with two bikes; both bikes have a listed ETT of 610mm, but they have different seat angles. ETT is always measured in a parallel line to the ground starting at the top of the head tube. Now let's assume this rider's actual seat height is 5" above where the ETT is measured. The bike with a slacker seat angle will actually feel longer while seated than the bike with the steeper seat angle, even though they have the same Effective Top Tube on paper. So saying that you prefer a bike to have a particular ETT isn't really considering all the necessary information.

Longer Reach also means that the measurement from the BB to the front axle will be longer. 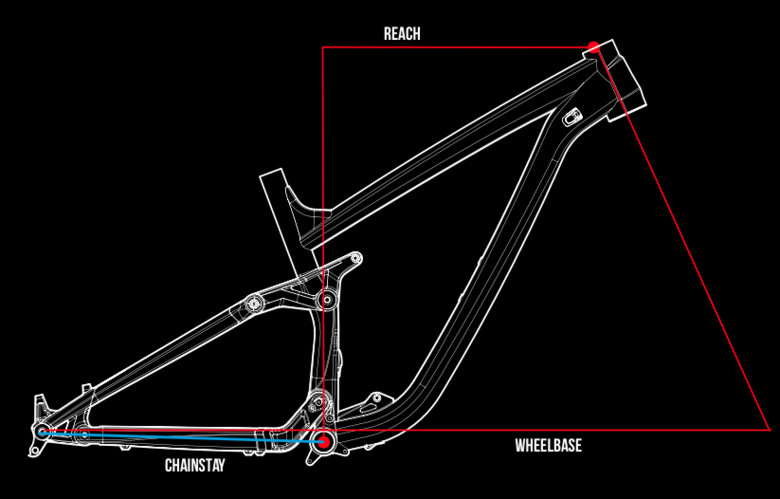 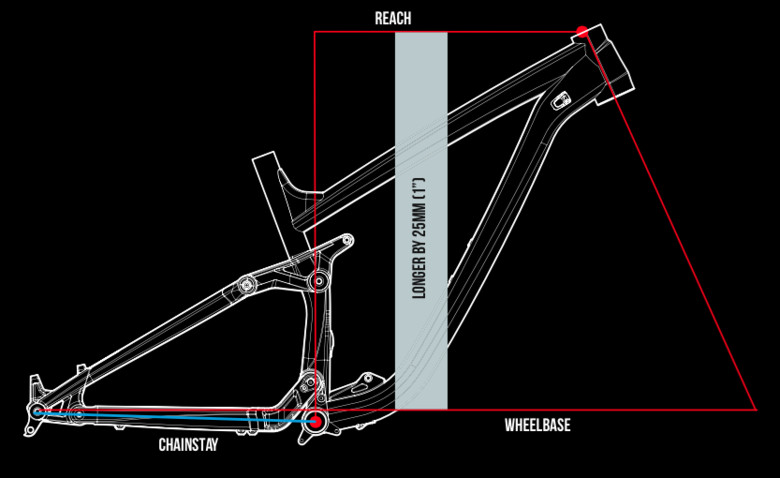 Let's assume that you take a frame and increase the Reach by 25mm. The distance from the BB to the front axle will grow as a result and you now have a bike with a longer wheelbase. You can now shorten the bike's chainstay length to get the wheelbase back to where we started. Same overall footprint, just with more bike out in front and less in the back. Same stability at speed, but a lot easier to push the rear end around in corners and get the front wheel off the ground when you want to. Decreasing the chainstay without increasing the Reach would shorten the wheelbase, potentially sacrificing stability at speed. And a slack seat angle combined with the shorter chainstay is going to shift rider weight even further over the rear axle.

With a longer Reach dimension, riders can run a shorter stem while still having enough room in the cockpit, whether seated or standing. Short stems provide stability, which is a good thing when you're hanging on for dear life down a high-speed singletrack descent or pointing it through a technical section of trail. When climbing, your tire is less likely to get knocked off line by a root or ledge in the trail. We're going to make a blanket statement here that's intended to offend plenty of people... anyone who doesn't consider themselves a purely XC rider shouldn't be running a stem over 60mm on a mountain bike. That's being generous too. Really we think that max stem length should be closer to 55mm, maybe even 50mm, but we'll leave some wiggle room in there.

We see people defying this rule regularly - probably because their bike's Reach is too short so they put on a longer stem to provide enough room to move around. Or because their bike came spec'ed with a 90mm stem out of the box and they never changed it.

You can visit www.transitionbikes.com to check out their new 2015 range of bikes that utilize the concepts discussed in this tech feature.