bturman 11/6/2014 10:31am
11/6/2014 10:31am Edited Date/Time 6/21/2020 6:12am
Every week a handful of new patents are approved in the mountain bike world. Some of the inventions are very interesting and some are hilarious. I like to keep tabs on the new stuff and will be posting up the ones that are the most intriguing. Join in the fun by posting up your own finds or check out some new ideas that may come down the line in the future.

First up is a wild new way of shifting gears that could replace front derailleurs. Patent # US20140323253A1 by Paul Thomas Williams. 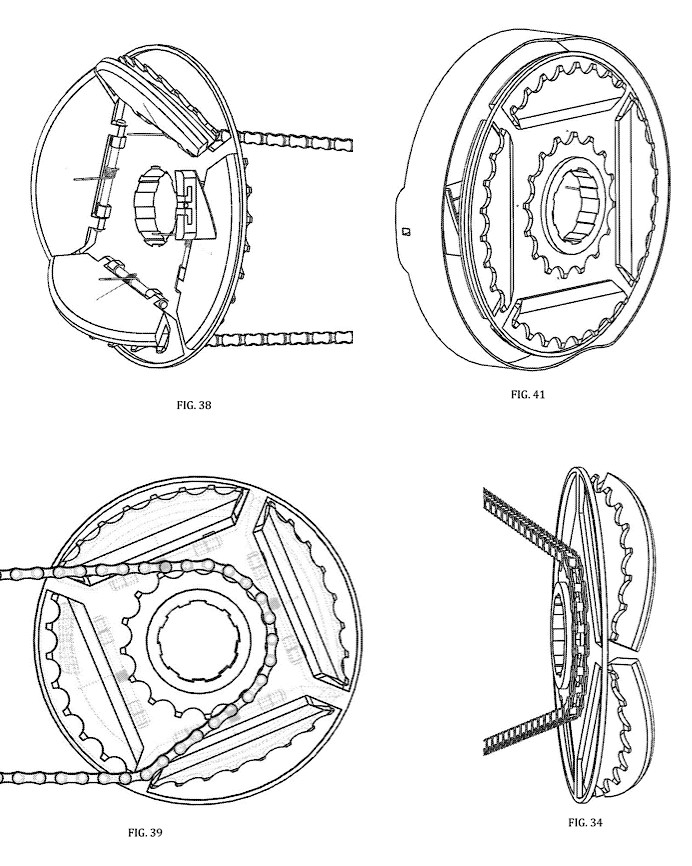 Abstract: Embodiments include a gear shifting system that eliminates the use of a derailleur and is capable of integrating with existing controls on the bike. 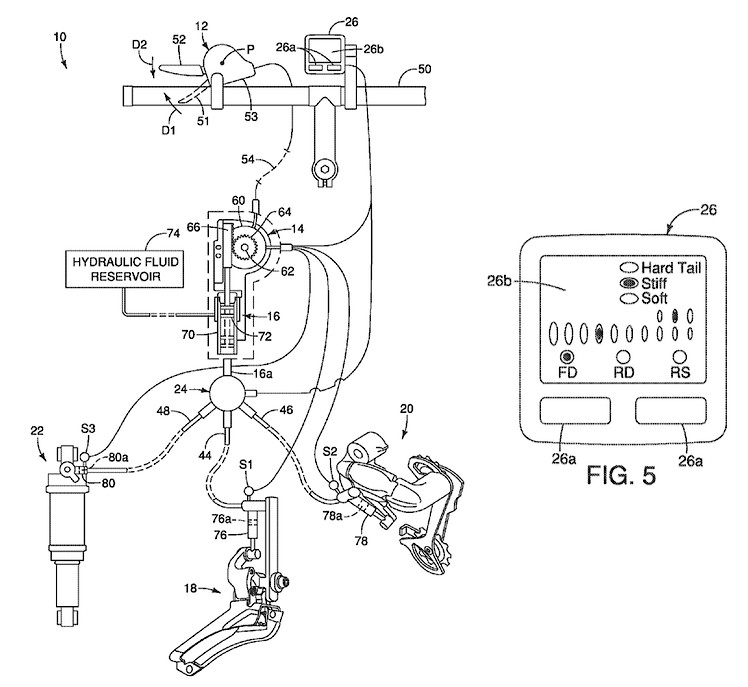 Shrockie 11/7/2014 2:45pm
11/7/2014 2:45pm
Power Meter linked electronic shock damping for instant pedaling efficiency without any levers to flick... full plush, unless you're cranking, then the low speed cranks up.
Can use the power source from your electronic shifter that will be mounted to your bike in a year or two.
Big Bird

Big Bird 11/7/2014 7:17pm
11/7/2014 7:17pm
Isn't that first one remarkably similar to the Browning Transmission of a decade or so ago? Great idea, but making it reliable was the issue I do believe. And come to think of it some other chap had a pretty good working prototype of his version a few years ago. Maybe this is him with the money and ready to go?
sledgehammer.s…

sledgehammer.s… 11/8/2014 12:19pm
11/8/2014 12:19pm
Funny that you guys wrote an article of my product a year ago showing acutally a working Version of this gear System which is also patented since years. Good luck Mr. Williams and I hope they refund you the Money for the application. See www.vyro.com. Product will be launched in February.
sspomer

Both this one and the other one you are thinking of use the same concept of moving part of a segmented chainring into the chainline in order to switch gears, same as the Browning. Actually Browning had a 2 speed BMX unit on the market 30 years ago. One of the most famous racers of the 1980s, Darrell Young, used it in competition quite successfully. Suntour BEAST was a triple version of this system that came out in 1990, except it shifted electronically. Although the BMX 2 speed functioned well enough, it didn't really offer a performance advantage over a traditional single speed for BMX racing. I don't believe that the BEAST triple held up very well in real off road conditions, and having to do a full 360 degree pedal rotation before you could shift isn't going to cut it for mountain biking in my opinion. The Vyro system on the other hand looks pretty good to me. Yeah, the concept of the segmented chainring is the same, but the mechanism itself functions very differently, is vastly more sophisticated and seems well thought out. I do have to wonder how it would perform, and what it's long term durability would be like in a really muddy climate though. That being said, I think it could be a great setup for someone like myself, as I live in a very dry climate and much prefer a two chainring setup over anything else. It's definitely something I would consider buying. Also, watching the video of the Vyro makes me wonder if that system could make shiftable narrow/wide chainrings possible? 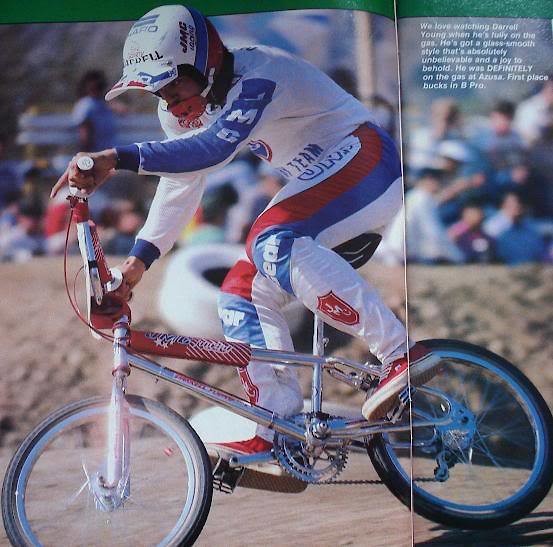 sledgehammer.s… 11/8/2014 11:22pm
11/8/2014 11:22pm
Well actually the Browning and the Beast did not use this technology. If you look closer you will find out that the chain is not moved anymore. Browning used on segment to derail the chain from one sprocket to the other. At the Vyro System all segments are brought into the chainline. As the video explains. Ending up that shifting works in less than a quater rotation. And yes I am riding a VYRÓ of the first series with an 11 Speed chain. It shifts faster and smoother than anything . But it looks way different than the old prototypes posted on the website. So I can understand the concerns when looking at these.
sspomer

Hello,
I have watched, and re-watched the video many times. At least 20 times, often stopping at starting it quickly trying to figure out what I was supposedly missing. I finally got it figured out and see what you mean. I also figured out why you are still having to go online and explain to people how it is different than those other designs. It's your video. It is really difficult to see what is going on. The camera angles are not very good, and your arm coming in and out of the shot directly in front of the camera doesn't help. It's easy for me to see it now that it understand what's going on. I don't intend to be presumptuous, but I suggest editing your video to include two shots from directly above, looking straight down. One while operating it with the chain on, and one with the chain removed. I think many people believe your system moves the chain back and forth between an inner and outer chainring (I did), and do not understand that there effectively is no inner or outer chainring. They miss that the larger chainring is moved over inline with , and covering up, the small chainring. Now that I actually understand how the Vyro operates my view of it changed from thinking it looked good and was something I would consider using, to putting it on my dream bike wish list. Best of luck to you. I am looking forward to seeing the final product!
sledgehammer.s…

sledgehammer.s… 11/9/2014 10:49pm
11/9/2014 10:49pm
All right. I understand. The thing is that people see what they are used to see. I even met product managers from big companies and they looked on it for minutes and then asked what is new on it. To make it visible we actually even put in this drawings of the segments but.... Anyway thank you for the hint and I will take care of it when making the next video in a few weeks showing the final product. I am sure they will post it here again. Thanks.
bturman 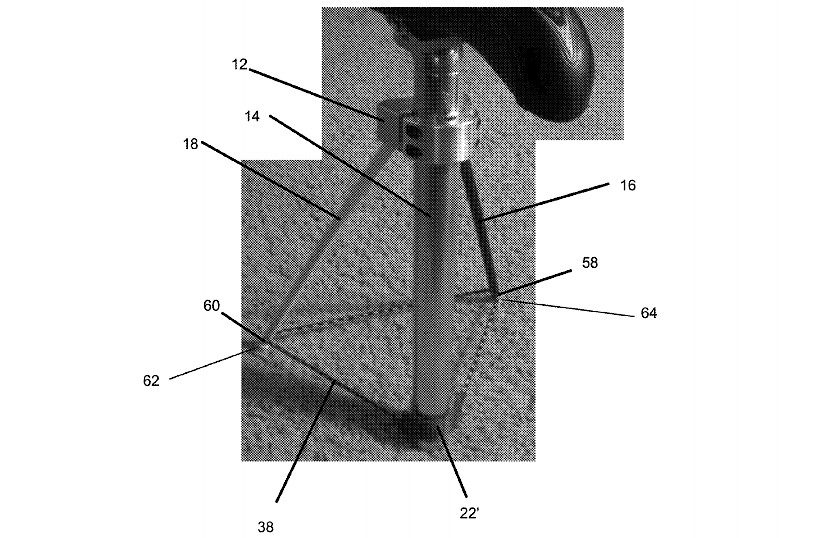 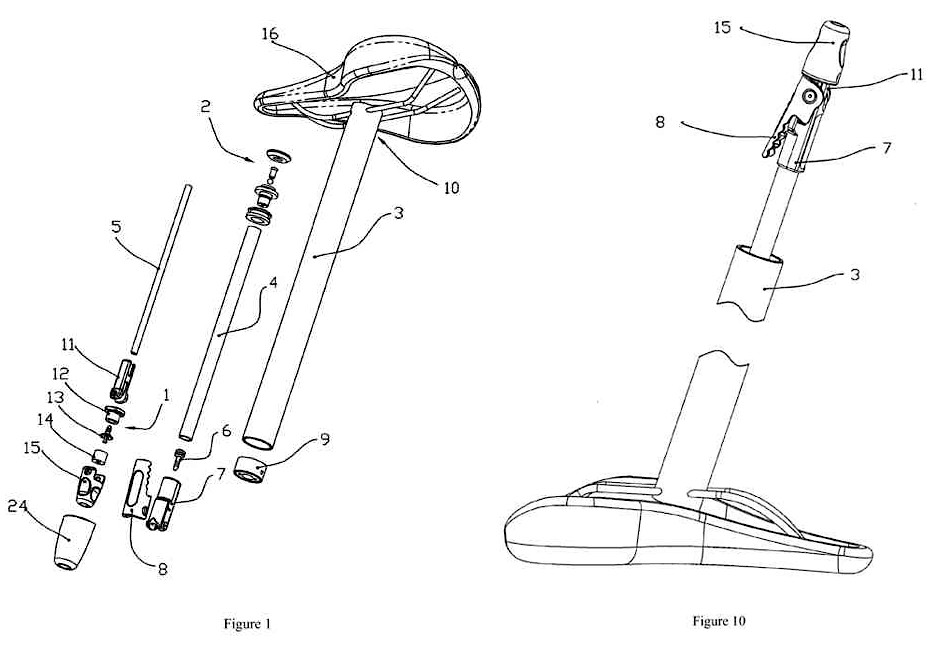 sledgehammer.s… 11/24/2014 8:27am
11/24/2014 8:27am
well thought a lot about These expanding gear System but the Point is that they will never be round. And if ever ridden an oval chainring you will know how much difference it makes if the chain ring is only a Little "unround". In the Video you can see how hard he tries to continously "pedal". Would be nice but is not practically. The most efforts did a Company called - Hettlage - Have look under:
http://hettlagedrive.de/
I wish all these guys would check the Internet before investing time and money. I have the biggest respect of anyone who tries to improve it but especially in times of web Access we should check who did already what.
bturman 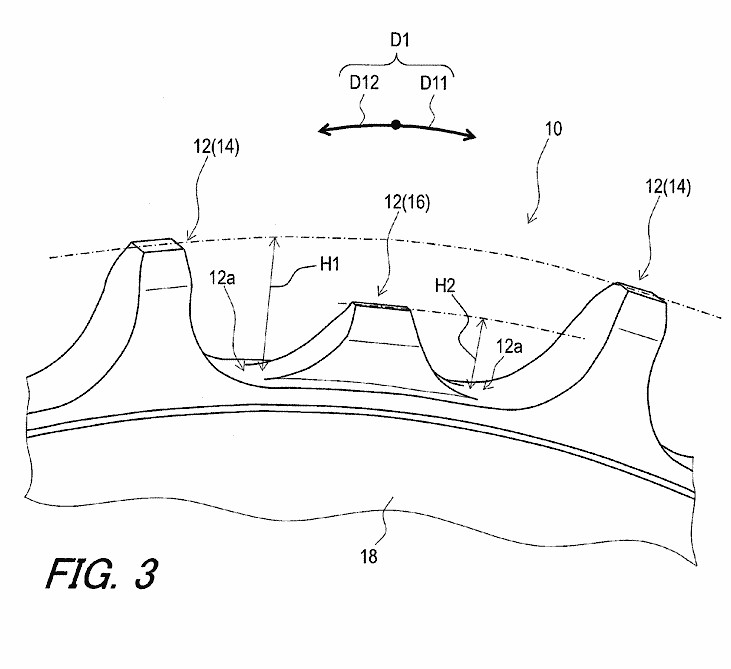 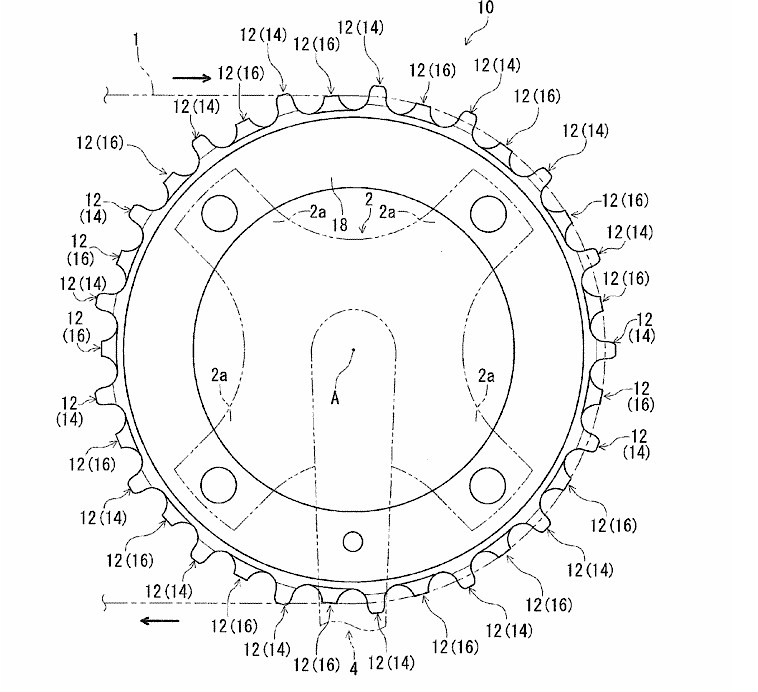 Essentially a rechargeable pump to do away with costly CO2 cartridges

"A conventional bicycle air pump comprises a discharge member mounted on a cylinder. A rider may attach the discharge member to a valve of a bicycle for inflating a tire. However, there is no pressure relief device in the air pump. Thus, it is not safe. Further, the cylinder is for a single use. Thus, the need for improvement still exists." 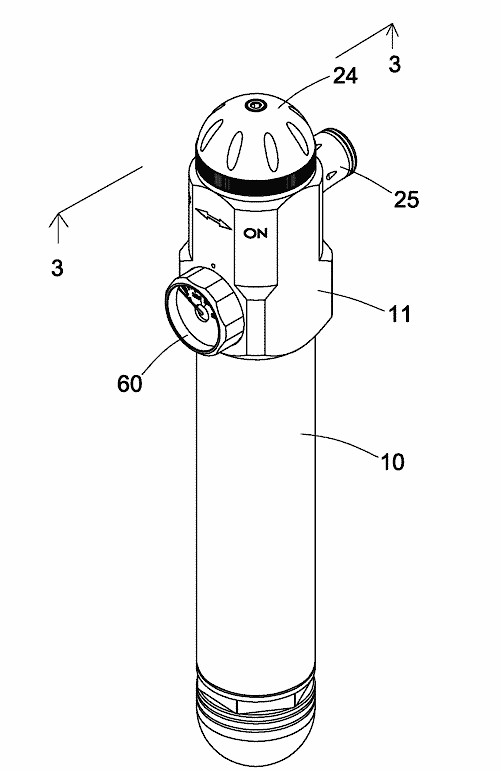 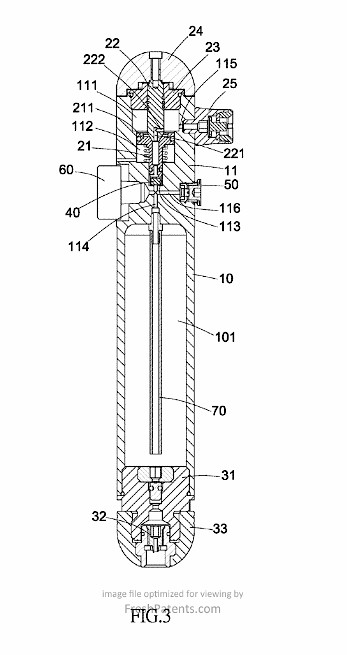 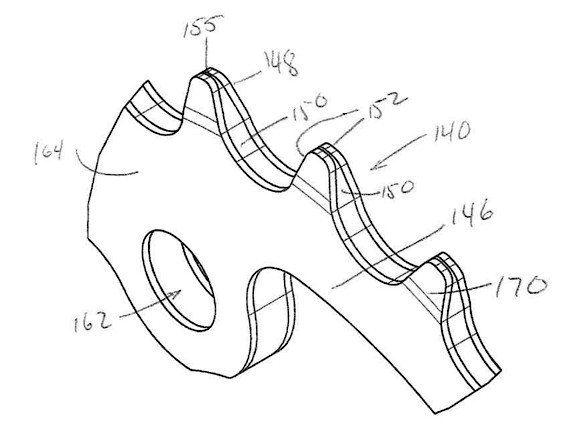 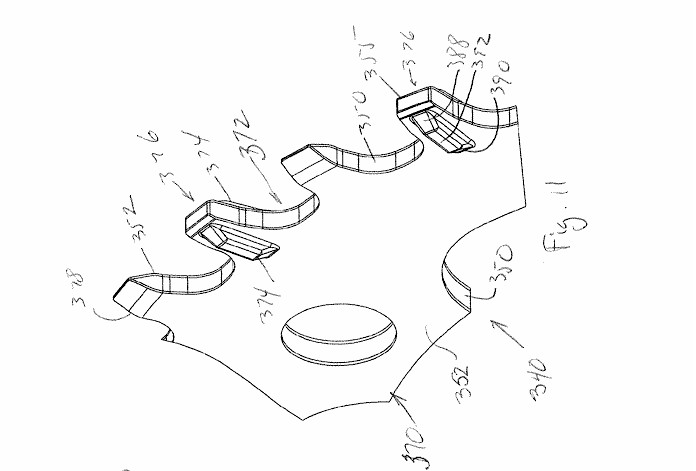 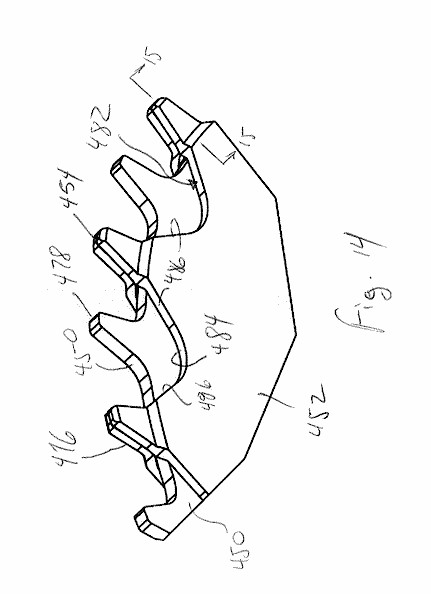 And some in-depth geekery about http://www.vitalmtb.com/photos/features/First-Look-First-Ride-2016-Rock…">Rocky Mountain's Maiden downhill bike:

Mountain bicycle with rear suspension having neutral braking trajectory - "A rear wheel suspension system pivotably attached to a bicycle. The suspension system has an upper link attached to a main frame at a first pivot point, and a rear stay member attached to the upper link at a second pivot point. A lower link is attached to the main frame at a third pivot point, and is pivotably attached to the rear stay member at a fourth pivot point. A shock absorber is pivotably connected to the upper link and to the main frame. An instantaneous center of rotation (ICR) is defined where an upper axis extending through the first and second pivots intersects a lower axis extending through the third and fourth pivots. The ICR displaces along a trajectory from behind the bottom bracket, through an inflection point at which the upper axis and the lower axis are parallel, to in front of the bottom bracket, as the shock absorber compresses." 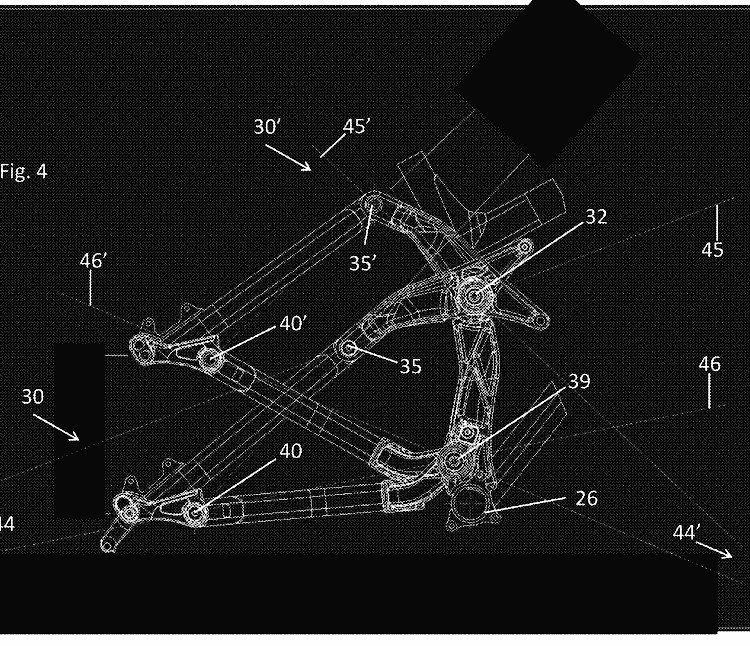 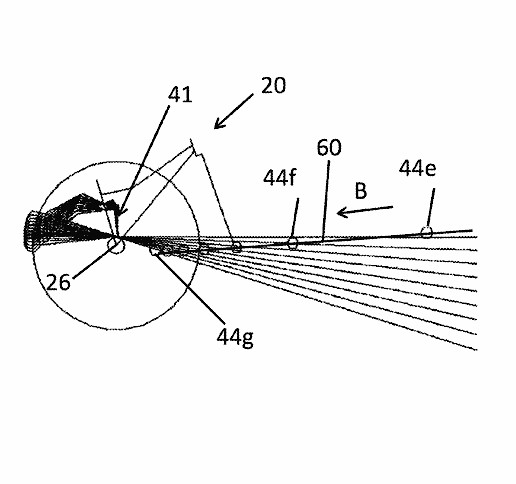 Here's something drivetrain related from Shimano. Looks like they're taking into account a ton of factors to spit out that final optimal gear. 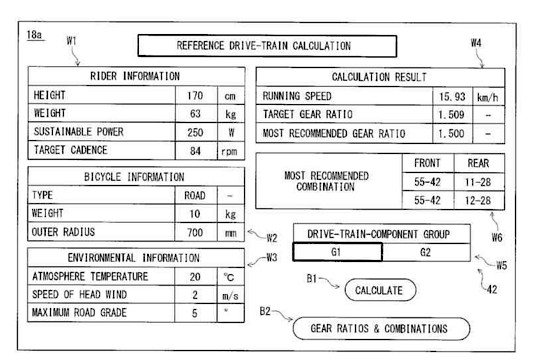 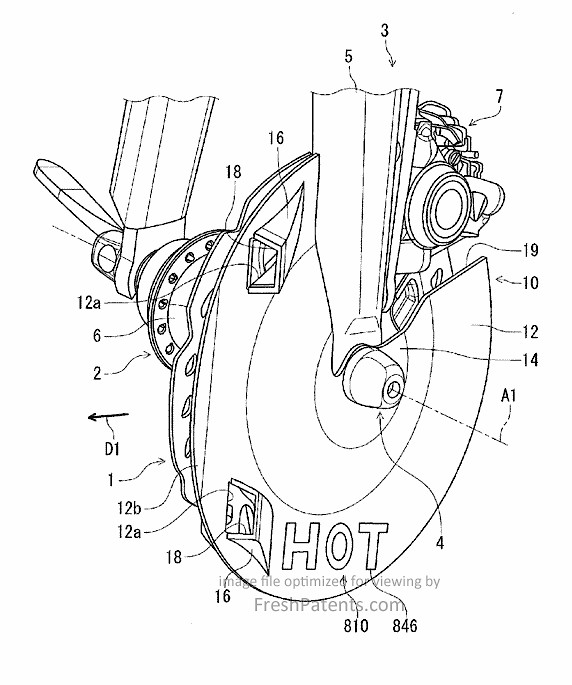 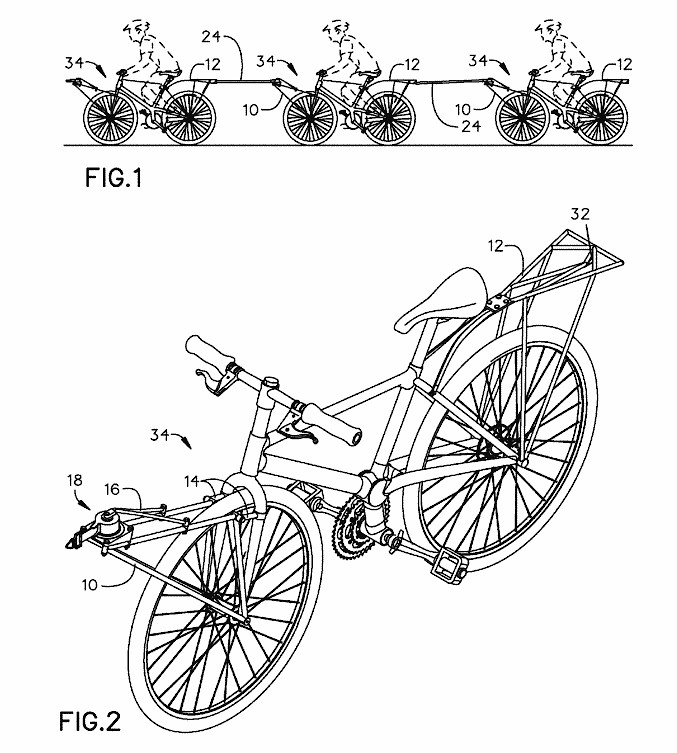 vinny4130 2/4/2016 12:44am
2/4/2016 12:44am
1. Most road riders are not trying to go as fast as possible decending, to me suggesting a lot of brake drag and lots of heat. Which is strange to me because I still see 140 rotors front and rear on disc road bikes. The other problem I see is the ridiculous gram counting by freds. I have seen to many times said fred buying the most wack shit because it's light and therefore better. Dangerously thin mostly air space rotors that warp and bend looking at them wrong or the the short lived alloy rotors (not icetec pre) or....or the carbon ones that sucked. To me this is a good parallel to moto, dirt bikes one rotor short intense braking not super high speeds, street/track bike massive dual rotors longer more intense braking slowing down from high speeds. Most likely an oversimplified comparison but there is.

Shrockie 2/9/2016 4:26pm
2/9/2016 4:26pm
If Spesh got dinged once on this already, this time continued infringement could be costly. Reminds me of the delayed wiper guy.. Glad to hear his IP is protected.
bturman 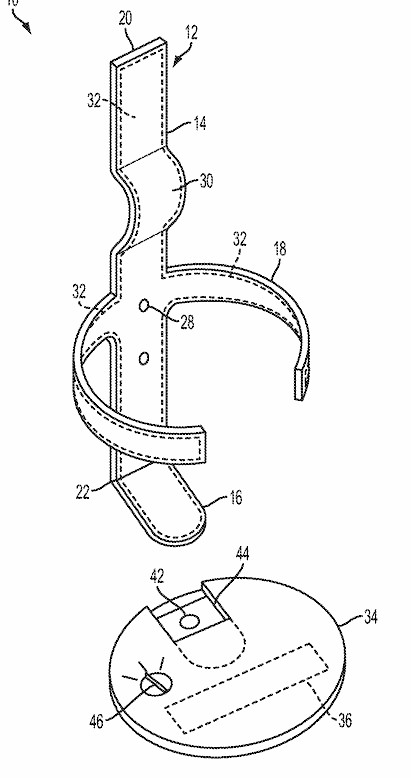 bturman 2/24/2016 1:58pm
2/24/2016 1:58pm Edited Date/Time 2/24/2016 1:58pm
Where to put that pesky shock reservoir? CSG, owners of Cannondale, plans to hide it in the top tube of what may be a new Scalpel or Habit. The patent mentions the use of electro mechanical actuators and accelerometers to activate a lockout with a blow-off, and the possibility of connecting it to the Lefty fork. 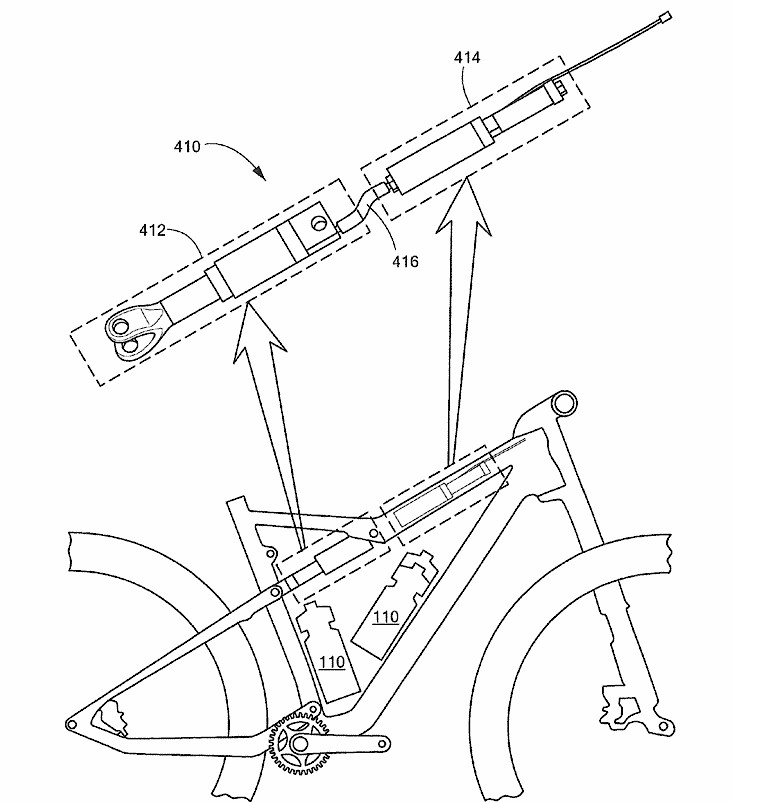 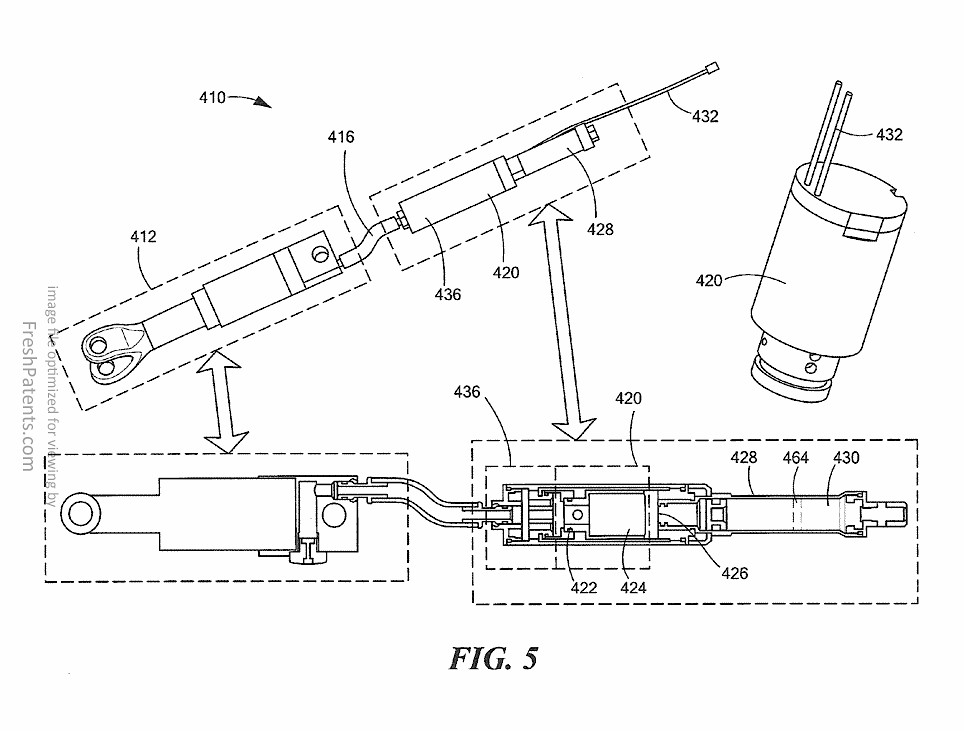 Post a reply to: The Patent Thread - New and Wild Mountain Bike Inventions