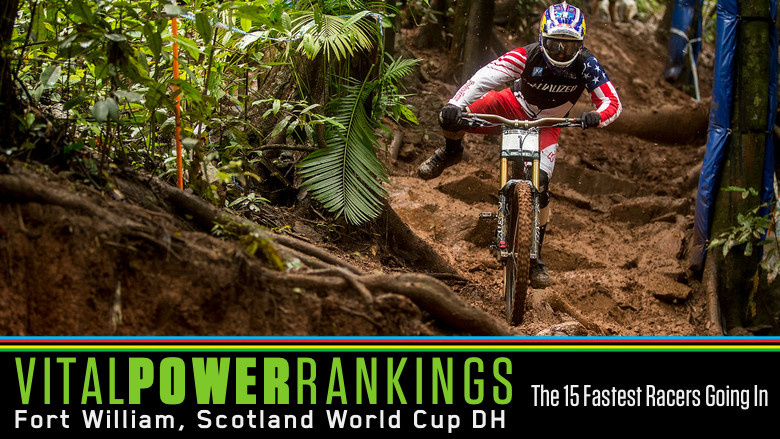 A monsoon in the jungle, if the Vital Power Ranking staffers were looking for excuses after Cairns, mother nature certainly obliged. All that water left the riders slithering down a muddy, root-infested jungle track and our carefully constructed predictions slithering shamefully in the direction of the history books. Well, the good thing about racing is that the past counts for nothing. It's rack 'em, stack 'em and bring on the next race.

The next race in question will take place on the legendary Aonoch Mor in Fort William, Scotland. It would be a miracle if it didn't rain here during the week, but it would also take more than a bit of water to change the way this course rides. Come rain or shine, Fort Bill will deliver its usual cocktail of rad racing and fantastic fans, most cheering for a local hero to claim top of the box after battling the long, rough course. And with an established track record of past events to rely on, building the Power Rankings for this week is surely just a walk in the park, right? 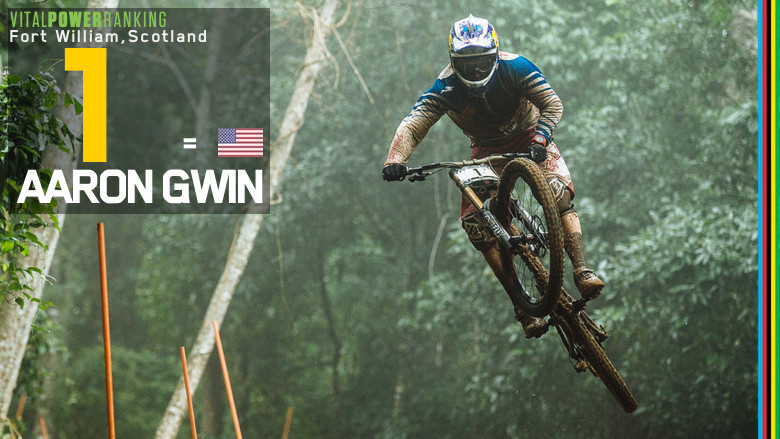 Aaron Gwin showed us that he is back to his best in Pietermaritzburg, and we're willing to discount the Cairns weirdness as a statistical anomaly. Fort William definitely ain't no jungle, although the midges here will eat you alive if given half a chance - at any rate Gwin is faster than any midge. We figure Aaron will be happy to hit a more conventional track and will continue to show the kind of pace we think he's on this year. 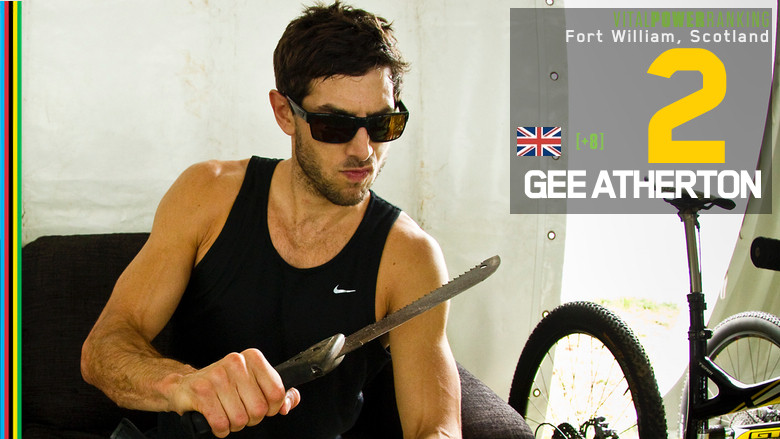 Gee made the Power Ranking writers look like fools in Cairns, but we're playing the weather card like there's no tomorrow on that one. Besides, tomorrow will look nothing like yesterday, and Fort William has only seen two repeat winners over the past 11 years. We're betting on a strong showing from the G-man that will leave him just short of top spot. 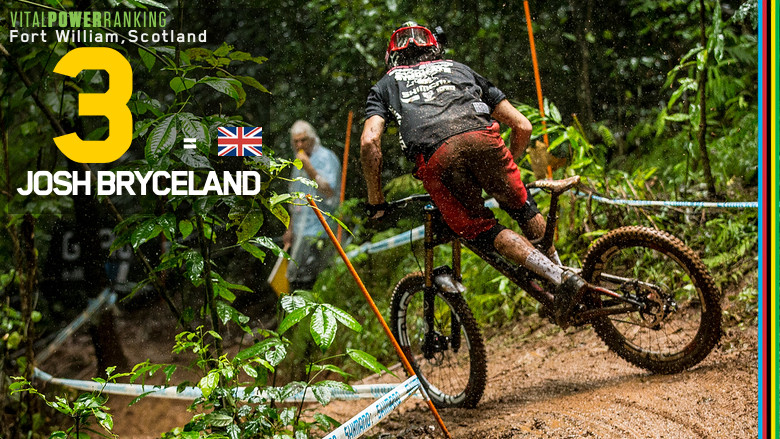 Josh has been having an electrifying start to the season, showing winning speed and backing it up with a 2nd place in Cairns. There's something about Fort William and Ratboy's priors here that planted a seed of doubt in some of the Power Ranking writers' minds, but we're ignoring that little voice (again) and we're putting Josh on the podium. 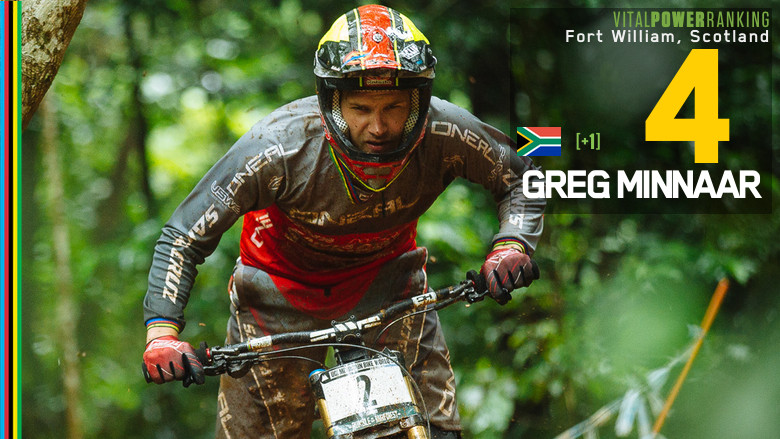 Greg is one of only two riders to have won Fort William back-to-back, and with a total victory tally of 4, he's also the winningest rider here. But we have a stacked Top 5 of talented riders and any one of 10 guys who could win here this week, so something has to give. Greg's only just back from injury and on a course as physical as Fort William, we see him having to back it off just a smidge to have a clean run. 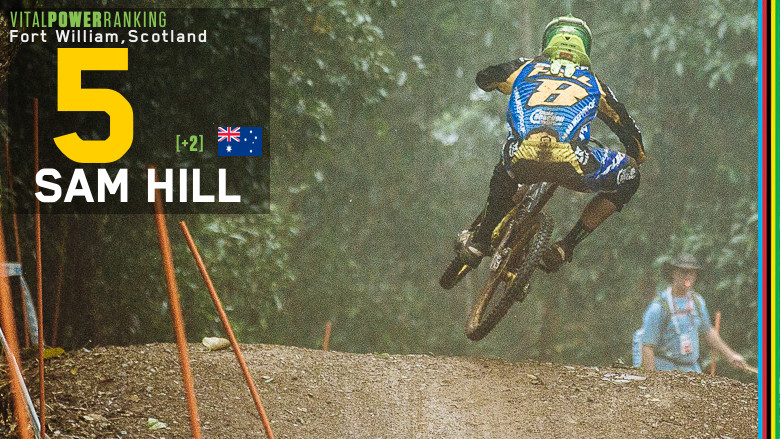 Sam always does well at Fort William, and he has won here before (in 2006 and 2007 to be precise), but it's not the kind of track that ultimately plays to his strength these days with that long, flat grind at the end. It'll be a tight race and the difference between a podium and 10th place will be tiny - we're putting Sam on the "right" side of that difference this time because we believe. 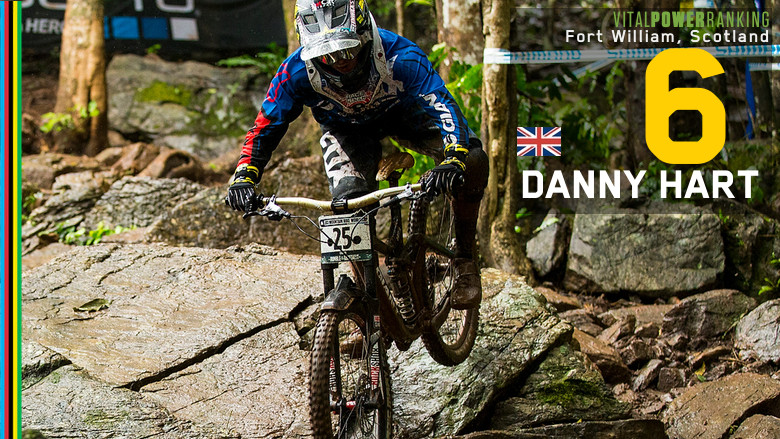 The Redcar Rocket has been sputtering a bit so far this year, and although he has done very well at Fort William in the past, it's a long rough track here and it will punish mistakes. Danny rides loose and his fast runs are always on the ragged edge. That sort of performance only comes together when you're perfectly in tune. We've seen the odd false note from Hart so far this year, so we'll leave it up to him to climb the podium and join the fat lady for a sing-along. If it makes you feel any better, Danny, some of the staff wanted you in #1 but democracy ruled. 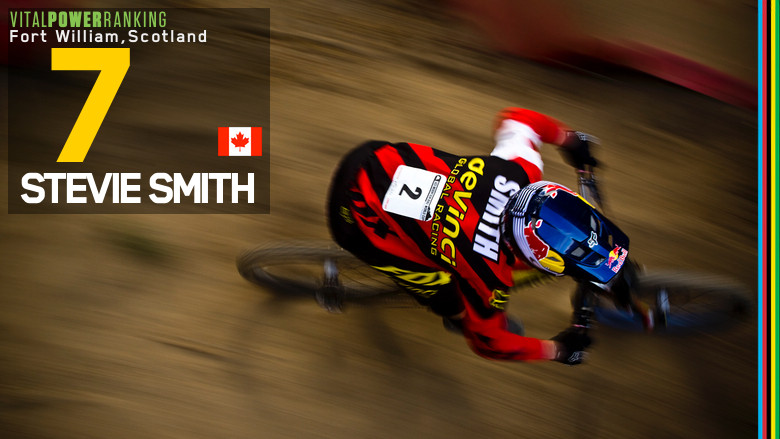 Steve Smith is just back from his recent injury, and there's no telling what sort of race form he might be in. Recent footage shows him riding well, and he's had good results at the Fort before, so we're going with the solid return scenario and an easy Top 10 spot for the Canadian Chainsaw Massacre. Welcome to the Power Rankings, Stevie. 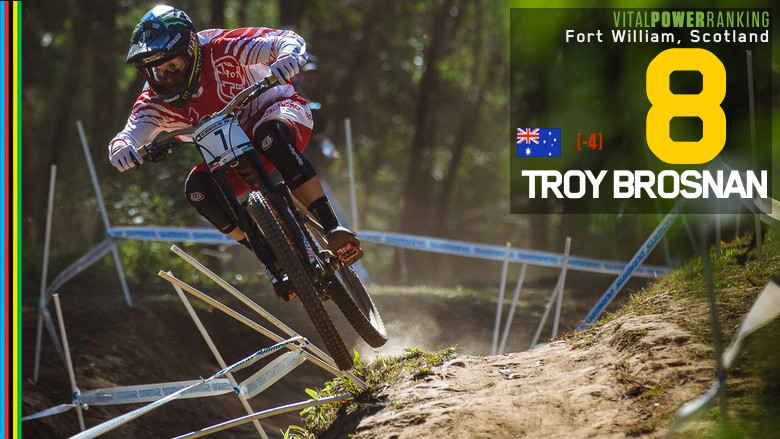 It's probably too easy to look at past results from the Fort when it comes to Brosnan. He's clearly on form this year, and there's no telling what damage he could have done on a dry Cairns course. But then again, that could be said about many riders in the jungle that day. TB has the speed to contend here, no doubt, but will he have the stamina and the clean run he'll be looking for? 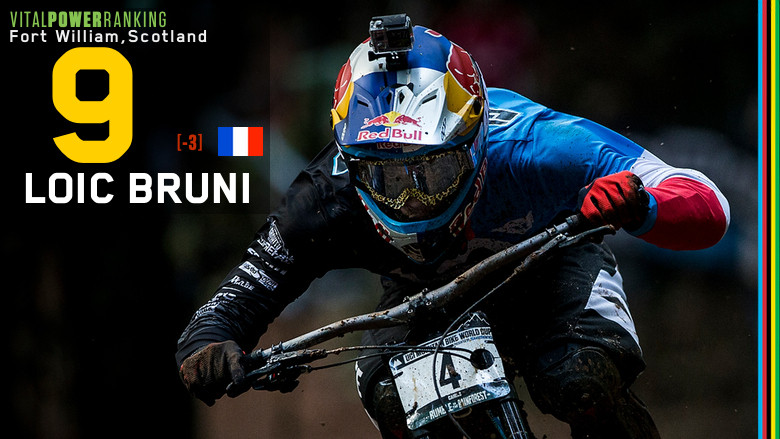 Bruni will be eager to forget about Cairns, and Fort William should allow him to do just that. With a strong showing in Pietermaritzburg confirming he is one of the riders to beat in 2014, we're holding onto our faith in the young Frenchman as a regular Top 10 contender. Fort William is a make-or-break kind of run though, and it will test the mettle of any rider. After his experience with a crash here at the BDS round a couple weeks ago, we see Bruni a little at odds with the course. 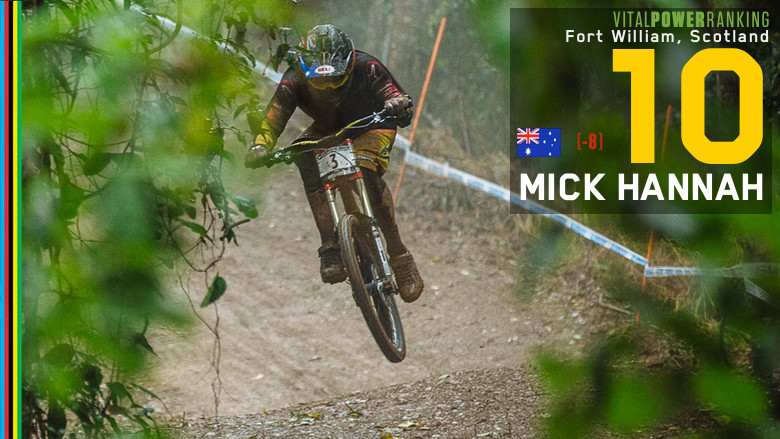 Mick has been close at Fort William in the past, and whilst he has been showing winning speed over the last 12 months, his season so far has yet to deliver on that promise. He won't be into crying over spilt milk, but you can bet he has been using the first two disappointments of 2014 to fuel his fire in training. Will that be enough on a course that doesn't suit every aspect of his game? Mick, some of the Vital staffers believe and wanted you in the #1 spot, but threats of desertion among the ranks left us with no choice. 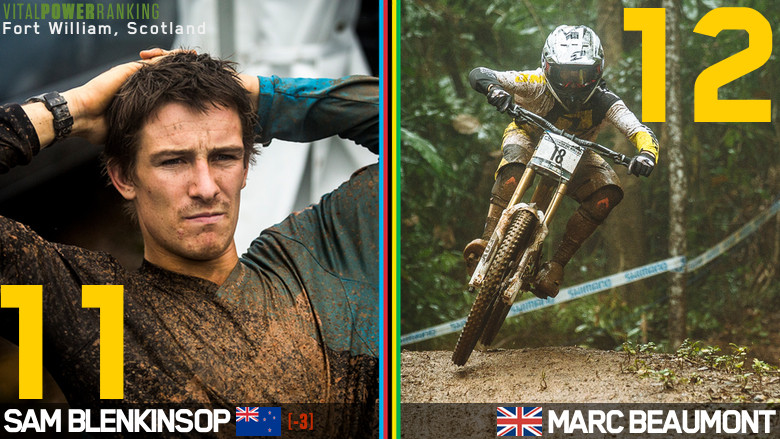 Blenki at 11th seems like a non-call, but Fort William is not the kind of track that will really allow him to shine. He could easily climb onto the podium, but there are only 5 spots up there, and too many fast guys this week.

Marc is fresh off a win at the BDS last weekend, and he knows the Fort William track like the back of his hand. A little more of a Struggler than a Slugger over the last 12 months, we hope some new-found confidence and near-homefield advantage will see Marc get close to the top-10 on Aonoch Mor. 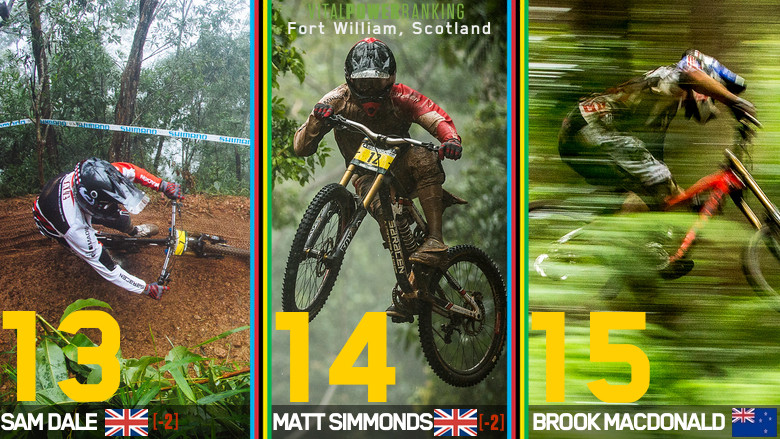 Sam Dale has shown he is up there with the fast boys this year, and as another local, he can count on track knowledge and fan support to give him a bit of an edge.

Matt Simmonds is no stranger to the Fort William Top 10, but he's been slightly off-pace so far this season and Fort William will amplify any short-comings in his riding.

Brook Macdonald is clearly not back to his pre-injury form yet, and Fort William is too demanding to expect any "miracles". The Bulldog will be back, just not quite yet. 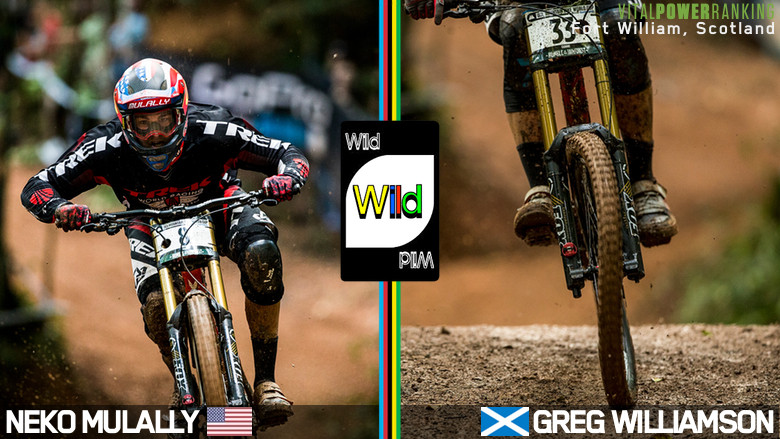 Neko has shown himself to be on the way to legit Top 10-contender status. Fort William may have some elements that resemble his native East Coast, but there's a lot that goes into doing well here. We'll leave it up to the quiet Pennsylvanian to use his wild card here wisely, and claim back his Power Ranking status for the next round.

Scottish-born Greg Williamson has all the home track support he can ask for here, and he has done well in the past. Despite a mishap that resulted in a mangled front wheel in Cairns, Greg showed the most heart, determination and spirit out of any racer down under, by pedaling that wobbly wheel as hard as he possibly could all the way to the finish. He'll be a top-10 contender if he brings that spirit home to Fort Bill. 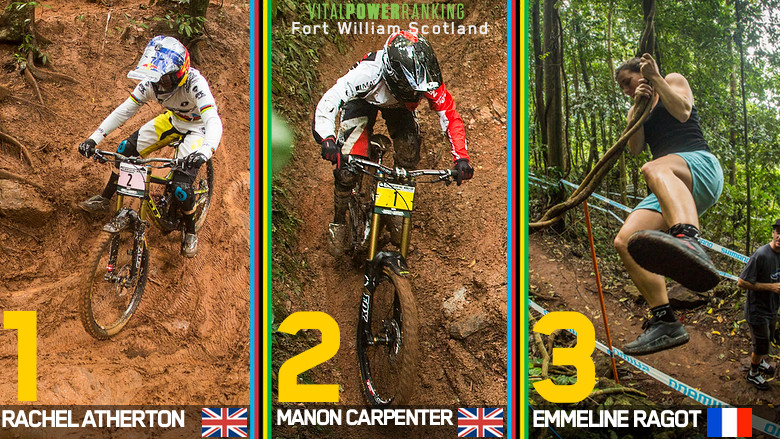 The question is not about whether Rachel will win here, the question is by how much. She struggled with a strange virus in South Africa, and although she was not back on top form in Cairns, she still put all the other girls in a world of hurt, winning by 11-seconds. Auspiciously, that was close to her winning margin here at Fort William in 2013, too.

Manon is the girl with the early season pace to challenge Rachel. She won't come close here in Fort William, but she'll be happy with a solid 2nd place regardless.

Emmeline has been struggling with the pace this year, but Fort William is a long track and Emmeline will be able to make her experience count here. A good clean run will allow her to see off challenges from Kintner, Nicole, and Hannah. 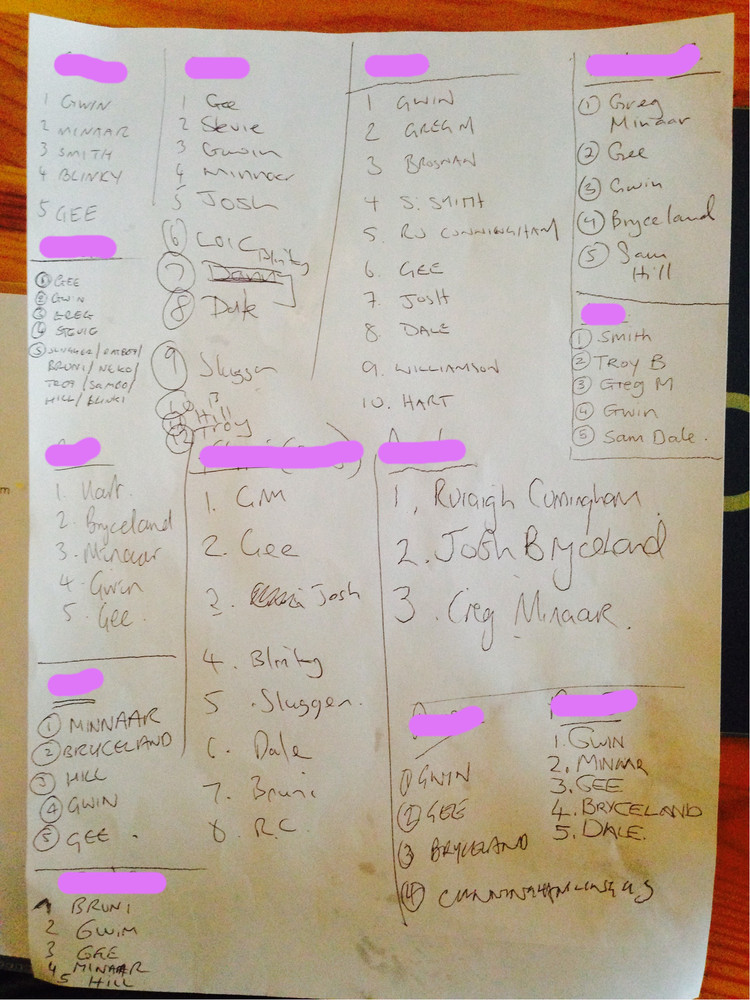