sspomer
10/28/2010 7:06am
By Andre Palmer
Mount Banyak, Batu, East Java Indonesia was the host for the 2010 Asia Pacific Downhill Challenge, held October 8-10. The Monster/Energy Specialized team was scheduled to race, so everyone came out in hopes of seeing the 2 newest World Champions in downhill. The Pros arrived on Friday and did the track walk, then decided not to do any
practice runs. Saturday morning, the sky was dark and at 9 am the rain came down hard...
none of the Pros had wet tires on. The one we all wanted to see, Sam Hill was able to get some intermediate Specialized Hillbilly tires put on and with one practice run in the heavy rain, he said, "it's like riding on an ice skating rink." 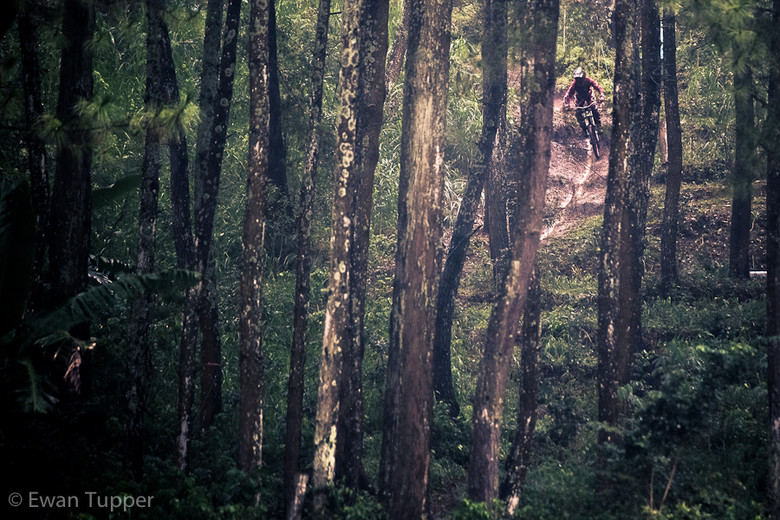 Seeding Runs
The seeding run for Elite was at 2pm and the everyone was committed to run without wet tires. Freeride guy, Thomas Vanderham, dropped in 1st, crashed few times and got
7th. Shaun O'Connor was next, crashed few times, but still put in a good run
and got 3rd. Junior World Champ, Troy Brosnan was just pinning it hard on the 1st
section. We'd never seen anyone rides like that in the wet on a dry tires on a steep
terrain. His incredible run earned him 2nd place. World Champ, Sam Hill is the last man to go down and he
looked in control until the 2nd jump on the 1st section, he went off sideways and crashed hard. Sam took his time to get back on the bike and still put in a
good run, seeding 4th. Local boy "Popo" seeded in 1st, almost 10 seconds on Brosnan. 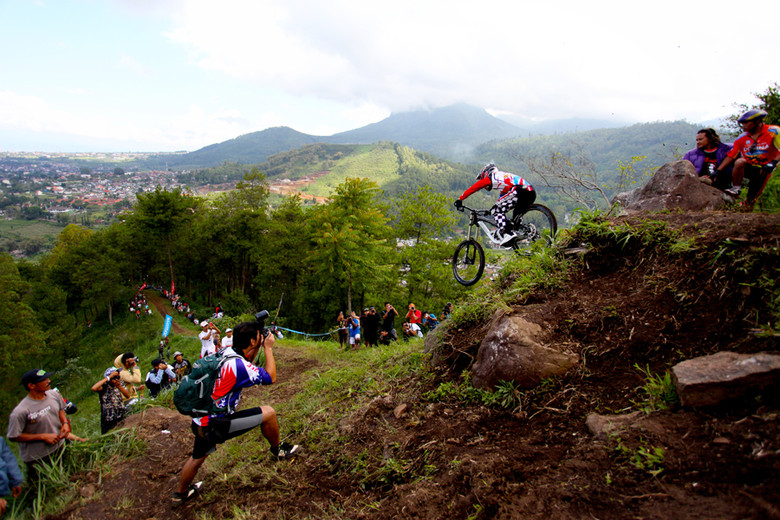 Finals
On finals day, the sun was out in the morning
and the top half of the track dried up pretty quickly. but the last section in the woods
was still slippery so tire choice was a bit of a gamble. Even though mud tires were found for all of the visiting Pro riders, they chose to remain on dry tires for their race runs.
They did 2 runs in the morning to check on the track and bike set
up. They seemed happy with everything and the race started at 1pm. Riders
were putting down faster and faster times as the track dried up. 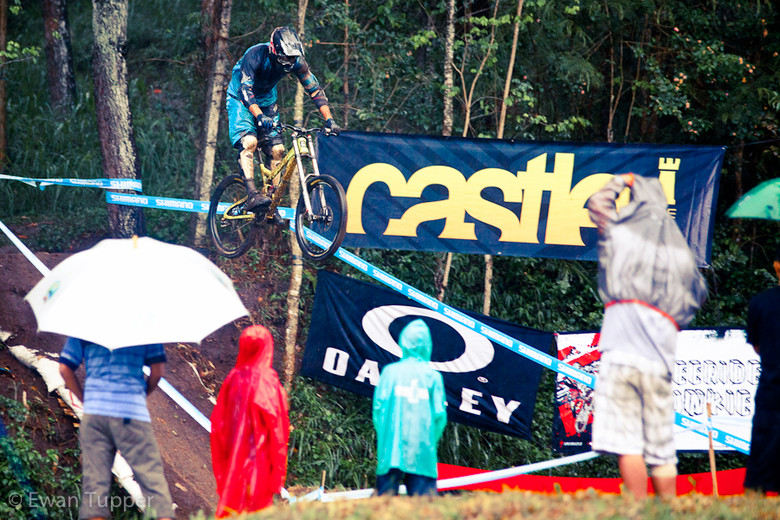 Thomas Vanderham had a clean
run with a 2.46.286 good enough for 6th place.
5th place qualifier and local rider, "Pornomo" was flying on the top
section but he made a few mistakes in the woods. He held on to 5th place with a
2.45.911.
Sam Hill looking very smooth and we thought
nothing can could stop him. He ran a 2.38.112 and got on the hot seat as the crowd went
wild.
Shaun O'connor couldn't better Sam's time. With an injured knee, he still put down a 2.43.572 for  3rd place.
Junior World Champ, Troy Brosnan, looked very fast and nailed everything
right, until the small drop into an off camber section in the woods. Brosnan came
in too fast and went over bars, finishing 9th overall. 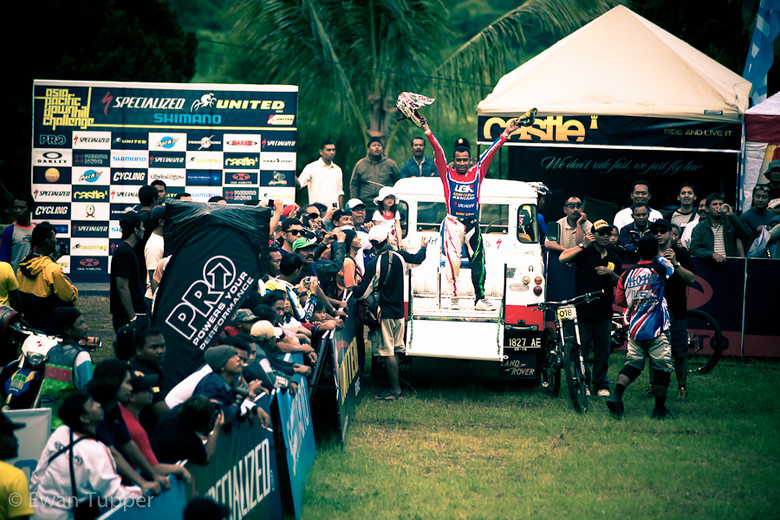 The last man to come down is
local ripper, "Popo" and the vibe is tense, as everyone remains silent until he shows up at the
rock garden looking out of control. He flew off the rock drop sideways and the whole mountain screamed, "OH!" at the same time.
Popo managed to keep it together pedaled like mad down that long straight into the
woods.  I couldn't watch. He almost lost it in the corner at the bottom of
that long straight, but again, he managed to pull it together. He crossed the line with a 2.33.770 to take the win. The whole mountain erupted and I even had tears running down my face LOL. Popo did it, he beat Sam Hill's time and no matter what
people said about Hill not giving 100%, thats racing. Sam Hill
said to us, "Popo ate my time, the boy is fast, I am surprised." 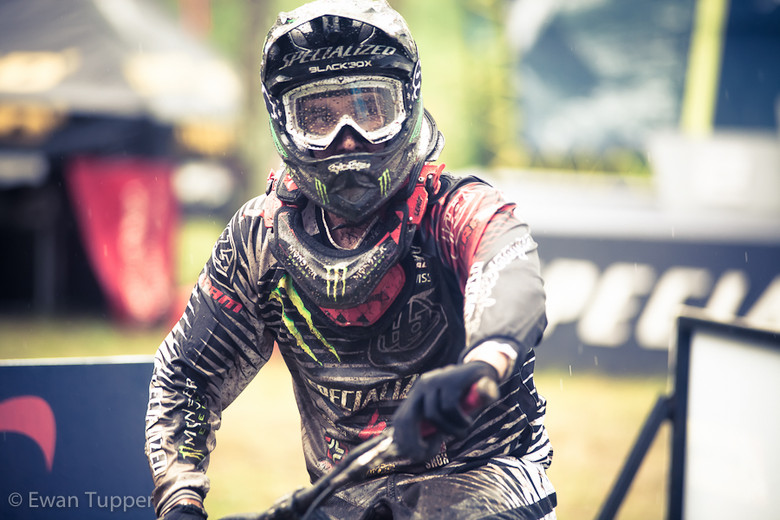 After the
race we had an autograph session and the Specialized boys were amazed at how many fans they
have over here. We had the mayor of Batu city giving out the
prizes. He was very supportive and was there for all 3 days. He's also very
proud to have the event held in his hometown. 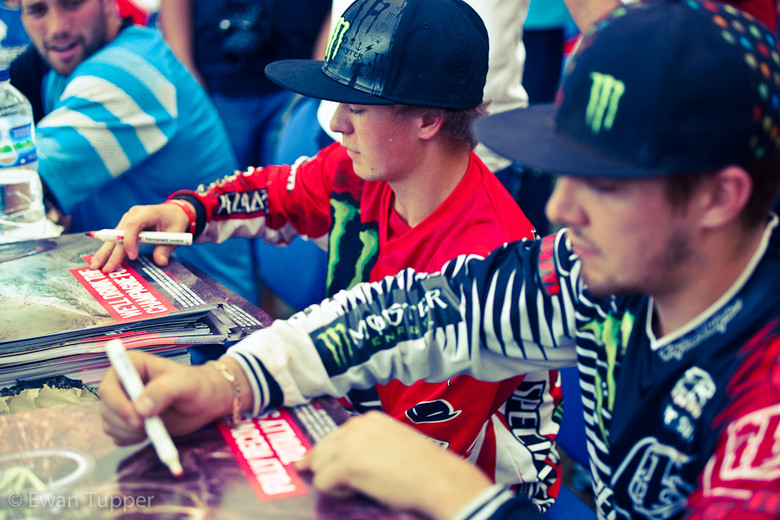 We flew to Bali the next day
and had a blast with the visiting pros. Sam Hill was very talkative the whole trip, quite
surprising haha. This was after few bottles of beer of course haha. We took
the crew to Jimbaran for Seafood on the 1st day, then we took them to flea market
for souvenir shopping. We saw a traditional Balinese cock fight, then
off to Padang Padang beach to get  work on our tan, then party at Paddy's and Bounty
at night. The last dinner was at the famous restaurant "Warung Made" and we all parted ways. 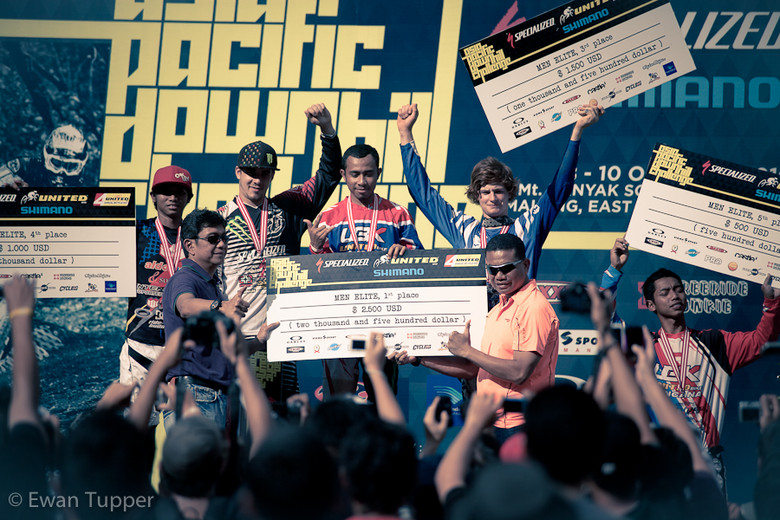 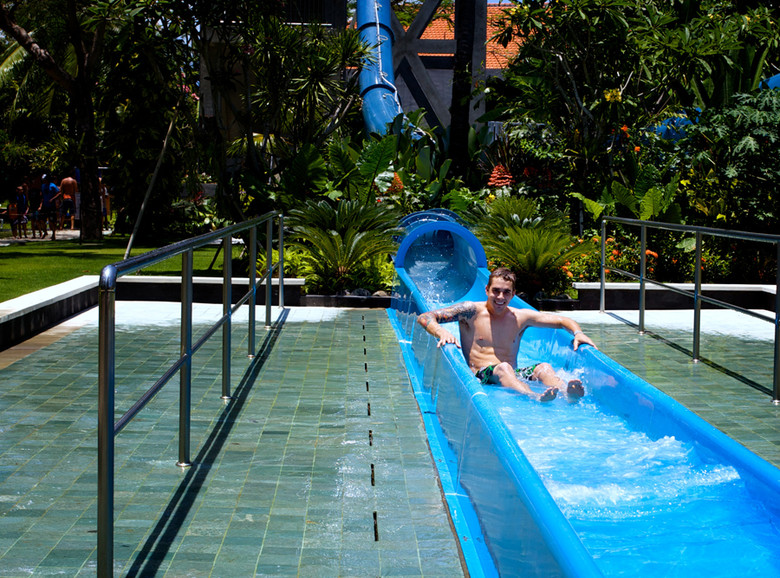 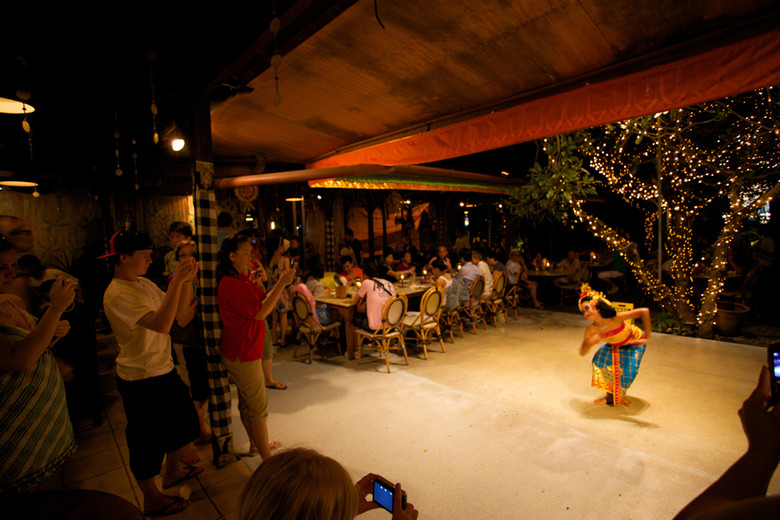