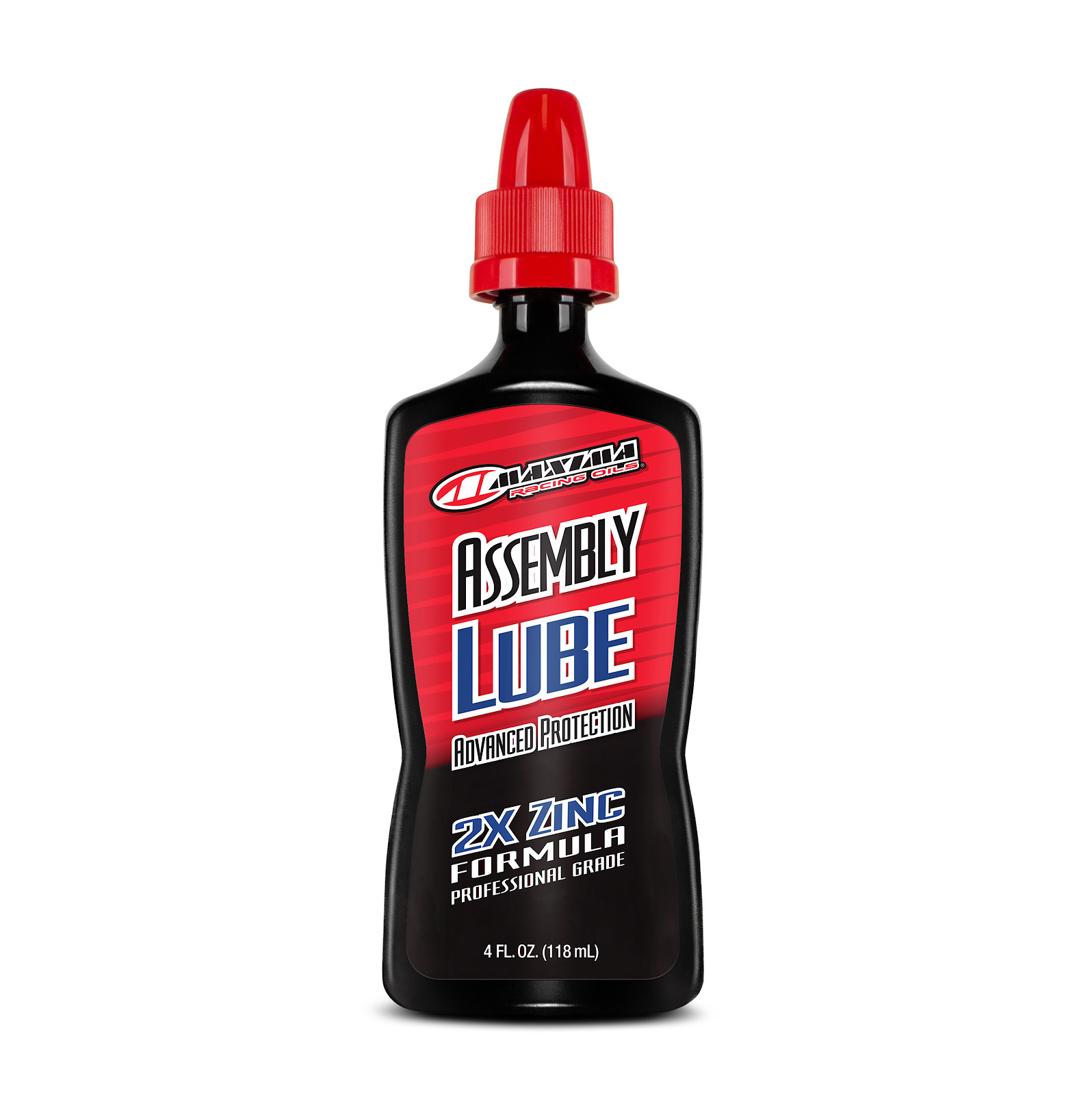 Review by Fred Robinson // Wrenching by Josh Job
Maxima have been hitting the Cycling market hard recently and both professional wrenches and home mechanics alike will attest, their products not only do what they say they'll do, but they do it well and smell great while doing so. Smell great? Yup, you read that right, every Maxima product is scented, and while that obviously doesn't play any part in how well the product performs, ask any wrench who's been cooped up in the back of a shop all day if something like how good or bad a product smells makes a difference to them, if they've experienced the pleasant perfumes of a Maxima product, we guarantee they'll say yes, it matters big time. Pretty clever on Maxima's part to do this, as it's way more likely for a mechanic to grab something that not only works well, but doesn't irritate their olfactory sense, than they are to grab the offensively odored stuff instead. So, when Maxima sent us their palate pleasing peppermint scented Assembly Lube, to say we were stoked to ditch the stinky stuff tucked away in our toolbox would be an understatement. Alright, it's clear this stuff smells good, but what exactly is it for and how well does it perform? 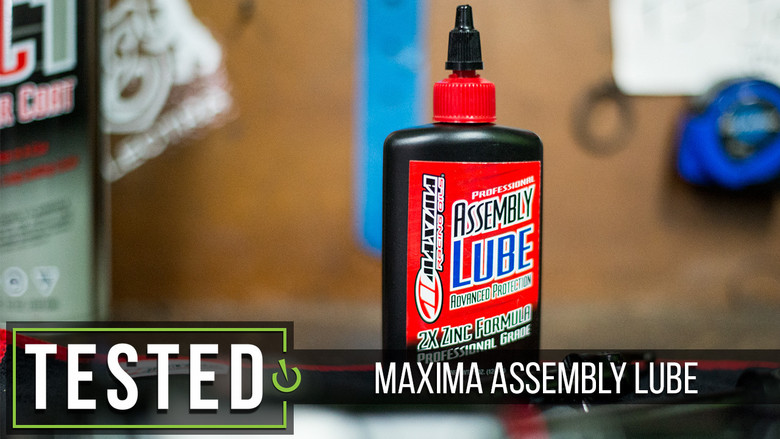 Before we dive into the review, we should first talk about this product's intended uses. Assembly Lube, that sounds pretty straightforward, right? That's what we thought too. Apply to metal on metal contact points, use on bolt threads to prevent galling and seizure, and put on things like your axles and what not, right? Well, yes, it can be used for all those things, but what we were actually pretty surprised to find out is that the Assembly Lube name is be a bit deceiving. When we spoke to Maxima, we found out this stuff was originally formulated for the assembly or racing engines - from MX to V8 engines found in Trophy Trucks, NASCAR cars and anything in between. As such, the lube was designed to mix with synthetic and petroleum based oils, meaning it can be used as an additive to the assembly // lubricating oil found in Mountain Bike suspension, in an effort to decrease friction and stiction. With that in mind, we tested the Assembly Lube in a number of places on our bikes, which we'll cover below.

Candy you can't eat. As we've already covered, Maxima gives all their products a distinct and pleasant smell, with the Assembly Lube's scent (and color) is that of the chewy Hot Tamales cinnamon candy. Beyond the scent of the stuff, the lube itself is has a syrupy consistency somewhere between your typical bike grease and a wet chain lube, think FOX Float Fluid or RockShox RedRum, it's right around there. Since the Assembly Lube is slated for multiple uses, we tested it as such. We applied the stuff to our headset cups, inside the lowers of an ancient RockShox Pike that we slammed to 90mm to use on a DJ bike, inside the new RockShox LYRIK, in our hubs and on our axles, bolts and binders. 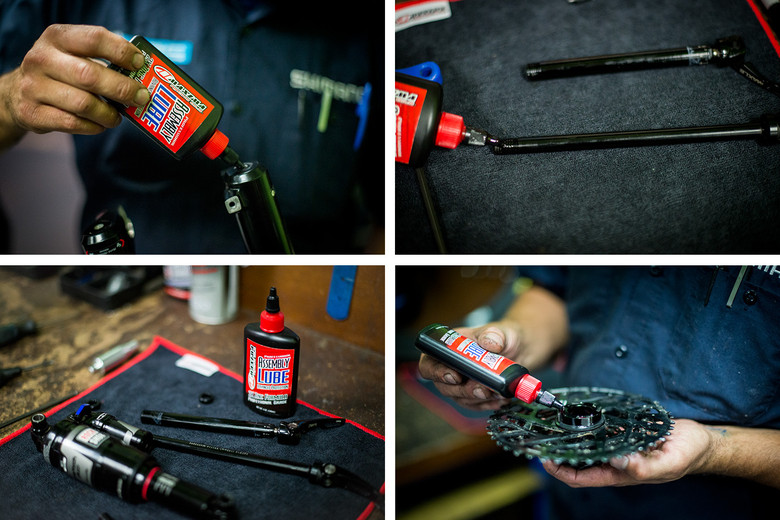 Using the 4 oz application bottle is as straightforward as you'd expect, especially when you're using the lube on axles and bolts, just drizzle the Assembly Lube on your desired part and spread evenly over whatever surface you're trying to cover. We used it on the entirety of the contact areas of our axles and with bolts we used it on the threads in order to prevent them from galling or seizing in the frame. For the headset, again, as you'd expect, we used the lube on all contact areas. It should be noted that the Assembly Lube is carbon safe, and is suitable for use in installing both press fit bottom brackets and headsets.

Applying the lube to your fork bushings and freehub pawls is obviously a bit more involved. To use in the fork, first we removed the front wheel, removed the fork (although this can easily be done with the fork still mounted on the bike) and removed both foot nuts that hold the lowers to the uppers. Once we broke the seal between the fork internals and the lowers, we drained a small amount of fork oil out and replaced it with the Maxima Assembly lube. Then we reassembled and mounted the fork back up. For our freehub, since our hub uses SRAM's XD driver, which just presses in, we pulled the driver off without removing our cassette, degreased and cleaned the pawls and internals of the hub, applied the Assembly Lube fairly liberally and reinstalled the driver.

We've been running the Assembly Lube in all the parts mentioned above now for nearly eight weeks. As we expected, the Assembly Lube has held up well in places like our headset, axles and bolts. No seized anything, and the headset has stayed quite and smooth throughout. No surprises here.

As used in the hub, we have nothing but positive things to report. We never experienced any sticky pawls or wacky engagement issues and our hub has remained smooth and problem free. As we mentioned before, the consistency of the Assembly Lube is somewhere between a wet chain lube and normal bike grease, which made our hub audible while riding, but not super loud and distracting. So far so good. 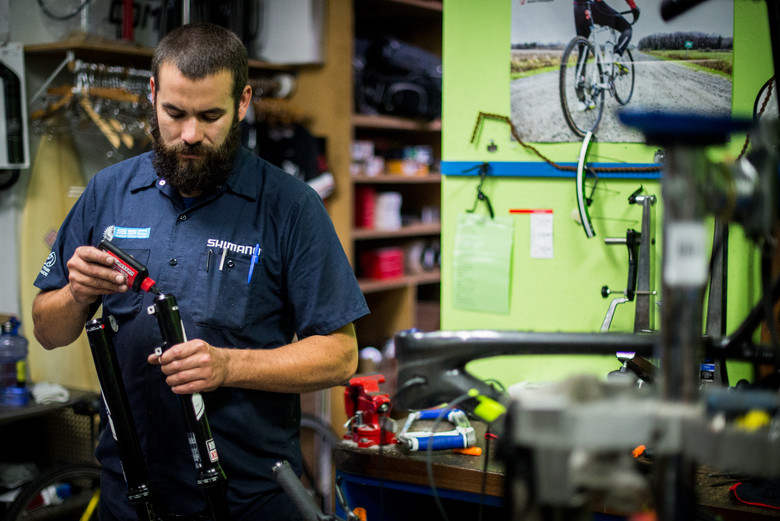 Now, where we were most impressed with the Assembly Lube, and where you'll get the most "on the trail" benefit out of the product, in our opinion, is the use of the lube inside your suspension. As you know, we used the product in both a mega old Pike and in a brand new LYRIK. First of all, credit where credit's due, the new LYRIK already has substantially low stiction, or stick-slip (more info on that in our LYRIK First Ride feature), so we can't say we felt a huge improvement in small bump performance or decrease in stiction, but we did feel an improvement. Whether or not that was a perceived reduction in stiction or an actual one, on the trail, it's hard to tell. Now, where we did notice a dramatic decrease in stiction was in our old Pike. This ol' boy was pretty sticky, and as a baseline test, we kept the same oil in there and only added the Assembly Lube to the lowers. After we sloshed the fork around a bit there was a very noticeable difference when engaging travel, and while the stiction was never fully eliminated, it was reduced by quite a lot.

One of the most difficult things about testing bike products is often the lack of standardized testing and availability of hard numbers. Sure, we felt a slight reduction in stiction and therefor a slight increase in small bump sensitivity in the LYRIK, and we also felt a dramatic improvement in the old sticky Pike, but how much of that is quantifiable and how much of that is just a perceived notion of improvement? Well, luckily in this case we were able to get ahold of some solid numbers based on actual dyno testing provided by X Fusion Shox, who was kind enough to send us the results of their test using the Assembly Lube in their air shocks.

Here's what Mike Davis, X Fusion's R&D // Suspension Technician, had to say regarding their testing of the Assembly Lube:

With the Assembly Lube in the rear shocks we have seen a dramatic decrease of between 10 and 15% in friction at the moment of inertia when the shock is trying to switch directions. The Assembly lube seems to bond with the metal parts, stay in place, and return back to the seal after movement; whereas grease gets pushed away, and until heated, as the shock gets hot, stays away. On the bike, this translates to a more sensitive and active shock, allowing the bike to track better through rough sections and have a more lively feel. It is a noticeable difference right away when we switched to the Assembly Lube.

So there you have it, between a 10 and 15% reduction in friction with the Assembly Lube when compared to another commonly used grease. That's pretty solid evidence that the Assembly Lube does as advertised and that our perceived improvement was indeed an actual improvement in performance.

After eight weeks using the Assembly Lube, the product has held up great and hasn't broken down, keeping all of our moving parts consistently smooth without the need to reapply often. The service intervals on all the parts we've used the lube on has remained the same without any premature breakdown or loss of consistency from the lube itself. All signs point to a long lasting and reliable product.

In terms of the product itself, we see no faults that need to be improved. The one thing we can nitpick, is Maxima might be understating, or at least not making obvious, all the uses of the Assembly Lube in their own product description found on their website. 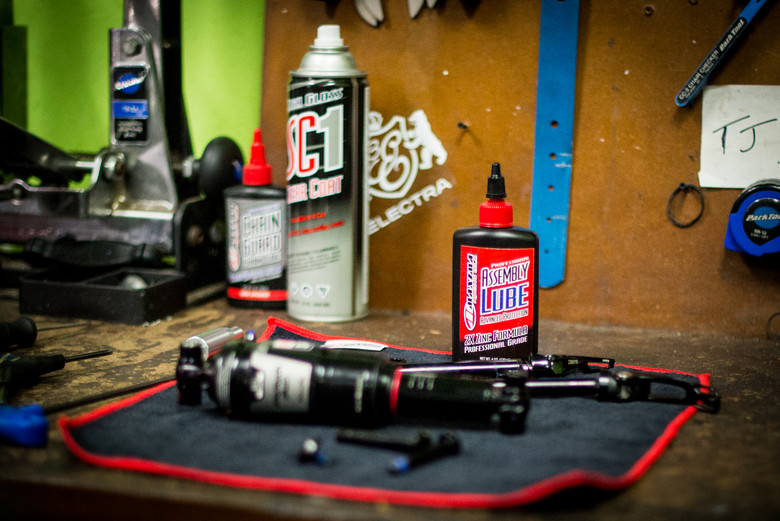 If there's one thing a mechanic likes, it's a product that does what it's supposed to and has multiple uses throughout the bike. Home wrenches and race mechanics will obviously appreciate that fact too, as space is often limited and finding a lube that has quite a few applications makes available valuable real estate in your toolbox. One lube to rule them all? Surely not, but the Assembly Lube covers most of your bases, and the fact that it can be used as a suspension fluid additive on top of that is a serious bonus. For those of you demanding the most out of your suspension, the addition of the Assembly Lube to your lowers and in your shock does in fact improve the small bump performance and reduce stiction, and from what we can tell, will also improve the lifespan of your bushings and any metal on metal contact points since it adheres to these surfaces nicely. In our opinion, Maxima has an excellent product on their hands with the Assembly Lube, and in the never ending quest to combat stiction and improve suspension performance, you now have one more weapon in your arsenal... and now we're craving those damn Hot Tamales.

Fred Robinson, a.k.a. "Derf-Doge," has been on two wheels since he was two years old. He picked up a mountain bike in 2004 and started racing downhill in 2006. He has seen moderate success racing but focuses his efforts on building, maintaining and riding his local trails. He's deceptively quick for a bigger guy and likes steep, fast trails where he can hang it off the back of the bike. As a SoCal native he mostly rides trails covered with loose, traction-less turns and sharp, immovable rocks. Besides downhill, he rides trail bikes, road, and also enjoys the occasional dirt jump session.
Read More »
Rate review:
FredLikesTrikes
10/28/2015 2:00pm

Review This Product
What do you think?
To add review, please join, log in or connect to Vital using your Facebook profile Login with Facebook.
Lubes/Oils/Cleaners 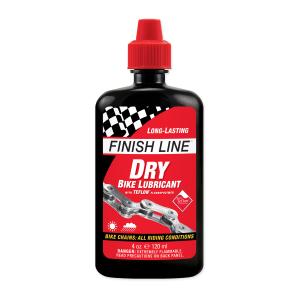 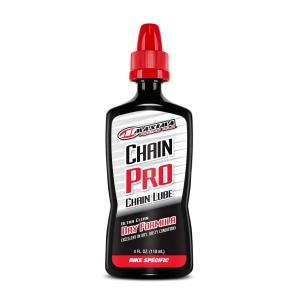 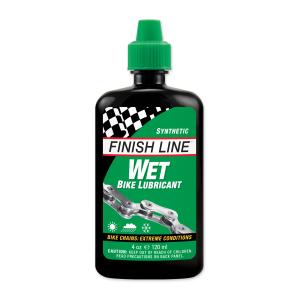 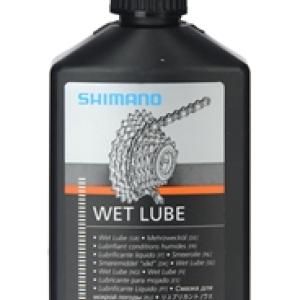 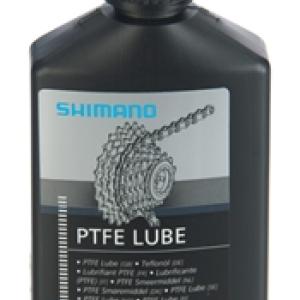 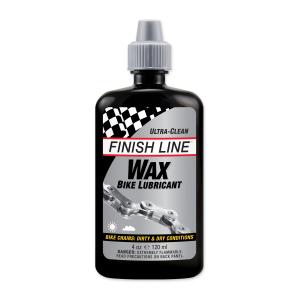 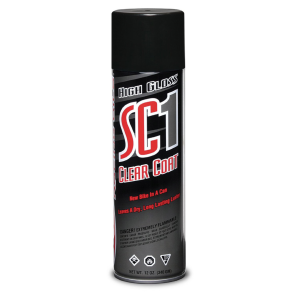 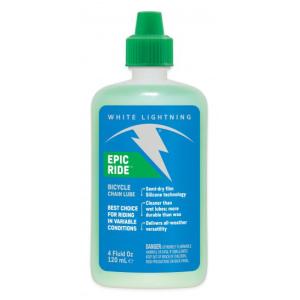