I don't think that a "best" system really exists. It's always going to be dependant on where you live and what you ride. I live in Nelson, BC where the climbs and descents are usually both steep and long . Around here you need a pretty low gear to grind your way up the climbs. I often end up in my lowest gear on the way up, but its pretty rare to spin out on the high end coming down. I also ride Schwalbe Super Gravity casings because I don't like getting flats and I like the support it offers, making the total rotating weight of my wheels a bit more.

I ride a X01 cassette with a 32 tooth oval ring. That gives me a pretty good range although there are certainly days when I could use one lower gear. I'm currently running a 27.5 bike, if I was on a 29er I would definitely need to drop the size of my chainring or get a a wider range cassette. The new Shimano cassette doesn't seem that interesting to me; at 11-46 its range is 418%, basically the same as the 420% range of Sram's 10-42 cassettes. I guess you don't need an XD driver to use it, but that doesn't seem like that big a deal to me since so many new bikes and wheels in the past 3 years have come with XD drivers and it seems to be a good system from what I can tell.

I'm really curious about the new e13 TRS+ cassette. Are you actually using it, or is it just your theoretical best? I've run the numbers on it and it seems to offer me everything I need in terms of range while maintaining reasonable jumps between the cogs. The only questions are how does it shift overall, and how smoothly does the 9 tooth cog work? I have a hard time imagining wear on the 9 tooth cog being an issue since most of us don't spend that much time in our highest gear. I'd love to see a review of it (hint, hint, nudge, nudge Vital), but I think that it will be my next upgrade on my bike.

The e13 has a range of 489% and would allow me that one easier climbing gear while keeping my 32 tooth chainring up front, letting me mostly stay in the middle of my cassette while descending to maintain good chain tension. Actually most of the numbers on that combo compare favourably with a 34 tooth 10-42 combo for high gears while offering a bit more low end on the other end. If I really needed more high gears with the e13 I could jump to a 34 tooth ring up front and not lose any low end over what I'm running right now. All told, it sounds pretty ideal to me, in theory at least. For anybody that wants to make direct comparisons between the different options available gears.mtbcrosscountry.com is a really great free resource!

The rumoured new X01 eagle from Sram is supposedly a 10-50 12 speed cassette, giving it a range of 500%. Pretty similar to the e13, but spaced out over 12 cogs. It would offer LOTS of range, but require me to run a 34 or 36 tooth chainring to get an appropriate gearing spread. I have a hard time imagining that a 10-50, 12 speed cassette would be any lighter than the 330 grams that the e13 cassette weighs and its bound to cost a boat load of dollars. On top of that I would have to run bigger rings up front, meaning a bit more weight and slightly less clearance. The only real benefit I can see to it would be having slightly more even jumps between gears, but that has never seemed like a big deal to me with any of the current cassette offerings. That seems like a pretty limited benefit to justify a new cassette, shifter, derailleur with a longer cage, and an even narrower chain.

Overall the new, even wider range cassettes that are becoming available seem to make the need for the extra complication and troubles of a 2X drivetrain pretty limited. Maybe if you're bike packing and really need the extra range, but in that case you could probably just run a smaller front chainring since I don't imagine most people riding a trail with bunch of cargo pilled onto their bikes are going to be cranking along at top speed. For myself I don't see going back to a front derailleur any time too soon.

Sorry for the essay length reply, but you asked what we thought was best and I've been thinking about it a bit recently and think its a pretty interesting topic. As a final note, anyone who throws out the argument that we should just man (or woman) up and get stronger needs to work on dropping the weight of their ego a bit. We all have different lives that allow us to ride different amounts, and like I said at the beginning the terrain and bikes we ride are different enough that it's really hard to make direct comparisons. For myself I'm pretty fit and I'm always interested, and actively training, to get stronger and be able to turn over a harder gear; but having a lighter gear to bail into when I need it means that I can keep my legs fresher over a couple days of shredding with my friends or practicing for an enduro race and that is a significant benefit to me.
PeteB

PeteB 3/1/2016 8:41am
3/1/2016 8:41am
Im gonna stick with my expanded XX1 cassette. With a wolf tooth 44t cog, it has a wider gearing range than most others, and the 10t gives me enough top end speed with a 30t ring. Any front ring larger than 30 or 32 makes my suspension feel funky while climbing. Even though the new Shimano cassette will have a huge range, it will require a larger front ring than many bikes are optimized for(in most cases), negatively affecting suspension behavior. I'd rather have better suspension than gearing.
elliotkelley

Nice, Thanks for the feedback! Does it feel like it pedals smoothly in the 9 tooth cog?
AGR97

You're not alone man, walking up the hill because you can't turn your legs anymore is not the worst thing ever, but spinning out when you want to go faster sucks
elliotkelley

David.Max wrote:
Nice, Thanks for the feedback! Does it feel like it pedals smoothly in the 9 tooth cog?

It does. Although I have to be booking it to need the 9 tooth because I'm running a 34 up front. Its not cheap, but compared to xo1 or xx1, its a no brainer for me. Once the xo1 on my other bike needs replacing, I will be getting another e13. It prob helps working at a shop, but the e13 guys were super helpful and friendly and I have no doubts they did their research and testing while designing it. Looks the part too. You can also replace certain sections of the cassette as they wear which beats replacing a whole 350-400 dollar sram cassette.
elliotkelley 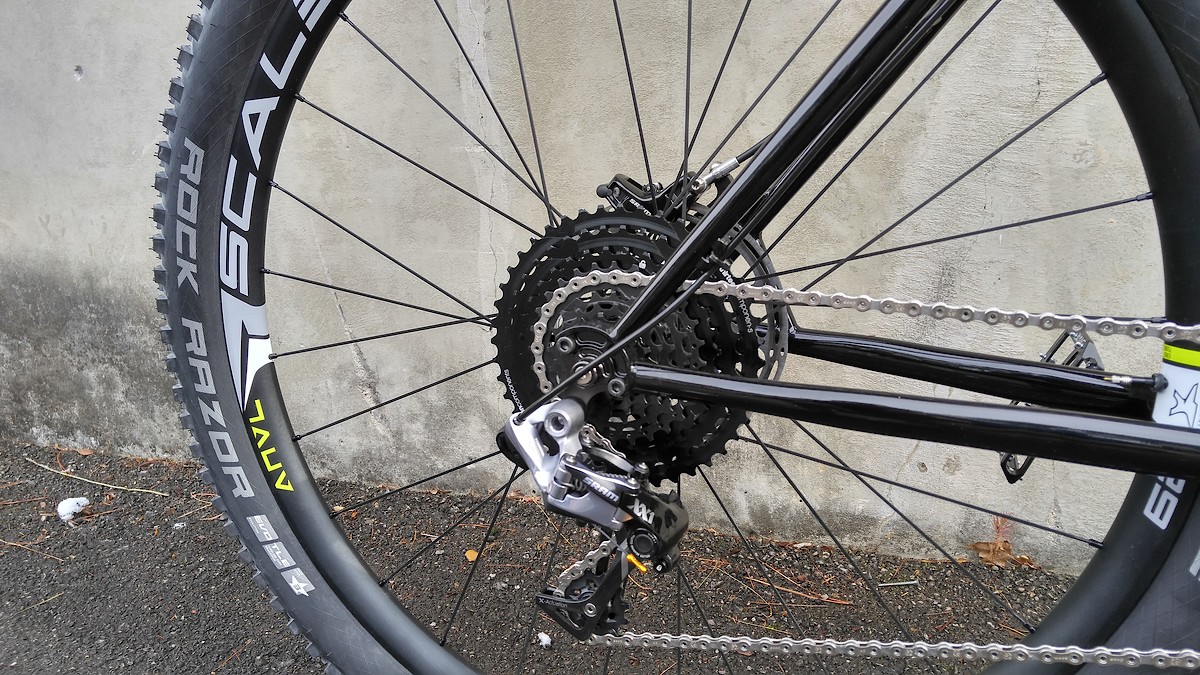 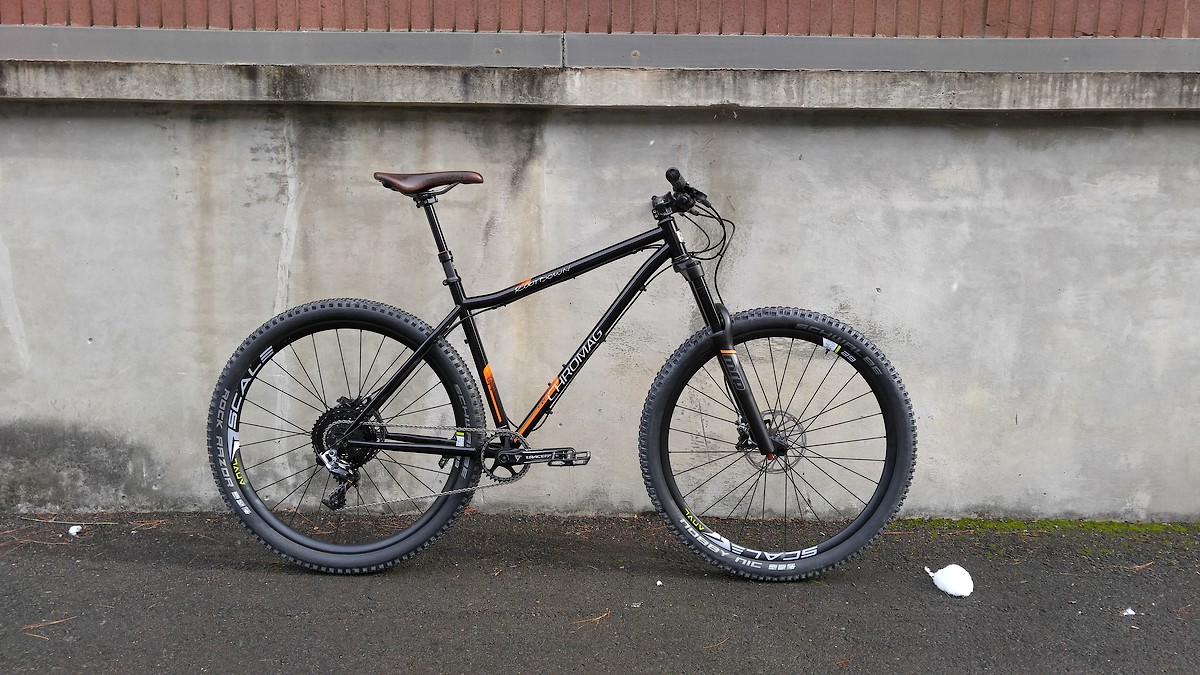 There is the e13. Not much different looking from than xo1 but a lot cooler!

A 12 speed 946 with a slightly different spacing would be my ideal the way I ride where I ride.

Colin McCarthy 3/2/2016 12:48am
3/2/2016 12:48am Edited Date/Time 3/2/2016 4:03am
I use a homemade direct-mount top chainguide for my Yeti SB66 that allows me to shift by hand between 36 and 24 tooth front chainrings. The chain is also secured to the front rings using an MRP XCG 36 bashguard. This keeps the big ring from smashing into the trail while also providing passive chain retention to both rings, keeping the chain from coming off the bottom inside of the 36t ring and conversely sandwiching the chain on the 24t ring between the aluminum bash guide and 36t ring. Out back there's an 11-36 ten speed XT cassette with the 36t gear locked out using the low limit screw on the rear derailleur (making it a 9 speed 11-32). This is an additional chain retention measure which also allows me to use a short cage rear derailleur and use the fewest amount of chain links possible, keeping the chain taught, and providing a 436% gear range with 12 unique gear ratios. This setup is ideal for many reasons, but not necessarily for every circumstance. Just like everything in life, compromises must be made. Due to lack of chain tension from using a short cage derailleur, the small ring has only 5 useable gears and the big ring has 9, giving me those 12 gears that are individual and don't overlap in ratio, but the small front ring can all only be accessed by getting off the bike and manually switching it, and vice versa. This takes five seconds to change the gear by hand and most of the time I'm riding up a road or trail and then down the trail, so it's really only a matter of smelling the roses, if you will. The advantage of running two front chainrings for this type of riding is that the kinematics of the suspension are effected by the front chainring thusly: By using a 36t ring for descending (in conjunction with a 36 point engagement hub) pedal kickback is kept to a bare minimum, but efficiency is still good. This is useful when pumping for speed and sprinting through rough terrain. When climbing in the 24t ring, the suspension has higher anti-squat values to work against pedal bob, pushing the rear tire into the ground for traction and provides a direct chainline to the low cassette gears for high efficiency and low wear on the drivetrain. This gear range could be easily duplicated using a wide range 1x cassette or double chainring with a front derailleur, but neither provide the effiiciency in gear step, drivetrain wear, shifting precision, suspension dynamics and chain retention of my system, for this bike. 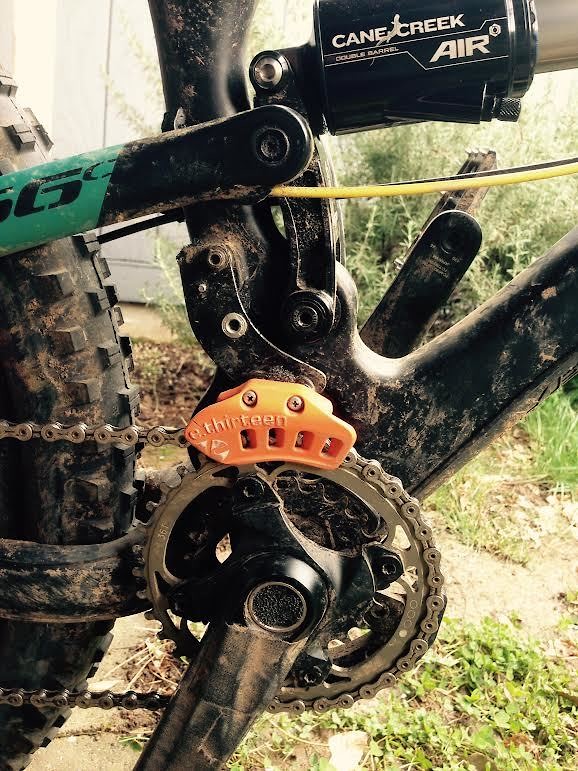