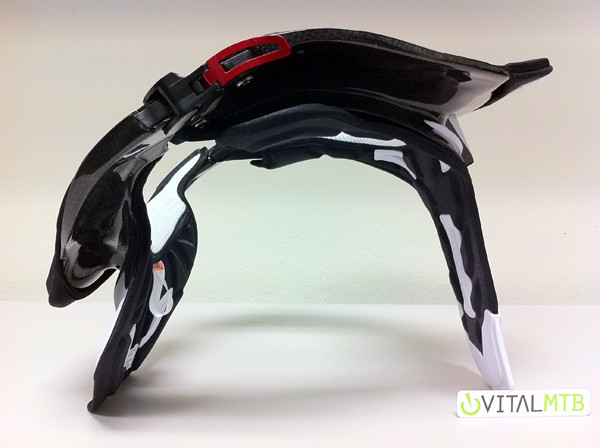 Product Specifications
Some Perspective
To give you an idea on where I am coming from with this review, I have been riding downhill since 2005 and started racing in 2006. With a background in racing motocross as a kid, I really felt at home on a DH bike. I live in Santa Cruz and do most of my riding there and throughout California.
The reason I actually stopped racing MX as a kid is because of a neck injury. I went over the bars on a whoop section during a race and landed right on my head. I was lucky to walk away. So when the first generation of Leatt braces came into the market, I was all over getting my hands on one. It was a pretty big cost at the time for me, but it felt worth it just thinking about my previous neck injury. I have been running the original Leatt for years now and don't get on my DH bike without it. 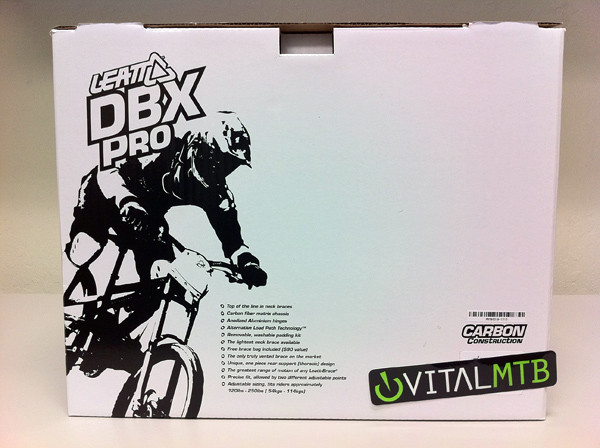 Out of the Box
When I first opened the box, I was impressed with the quality of the brace bag that it came with (quite heavy duty). For me, I like to keep my gear ready to ride at pretty much all times, so the brace bag probably wont get too much regular use. But for when I go for a ride out of town (or for riders who travel often), the bag would be great to protect the brace when not in use. 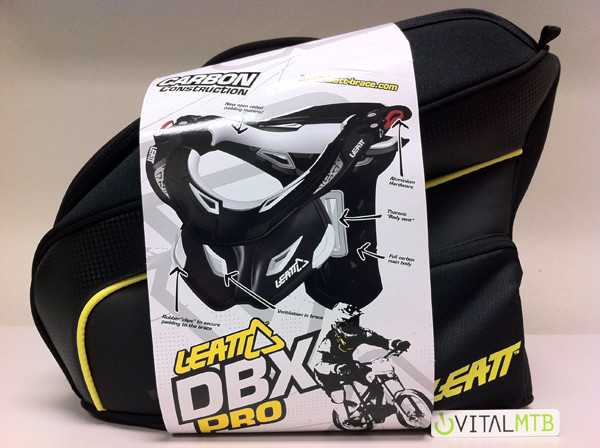 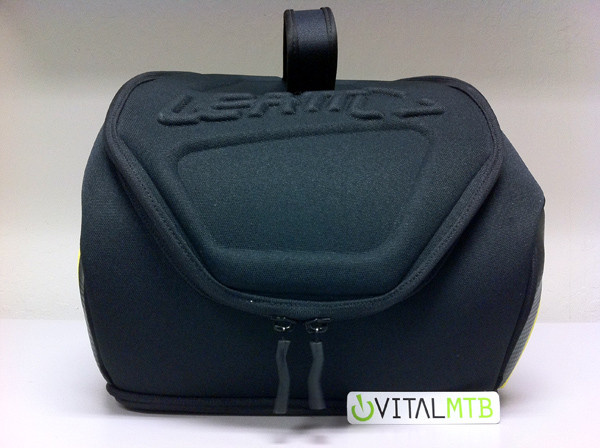 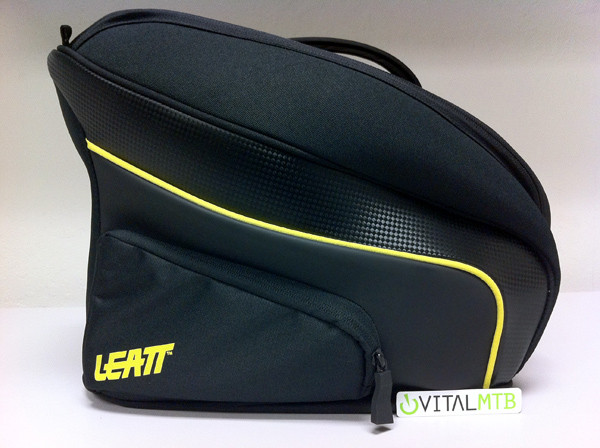 The brace bag has two side zip up pockets and the main compartment. On the inside of the bag it had the user manual and safety info attached to the top of the brace. The bag has a removable (velcro) drawstring pouch that sits in the middle to hold accessories and could easily fit a pair of goggles. 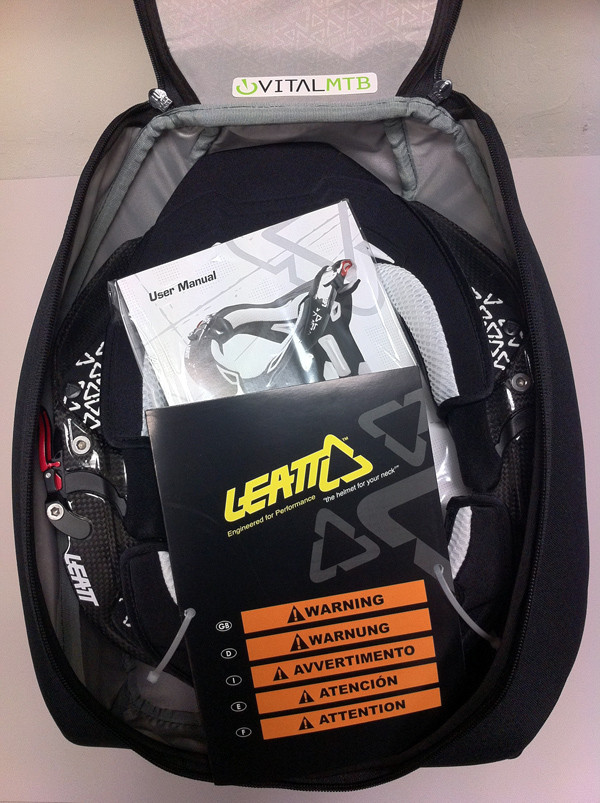 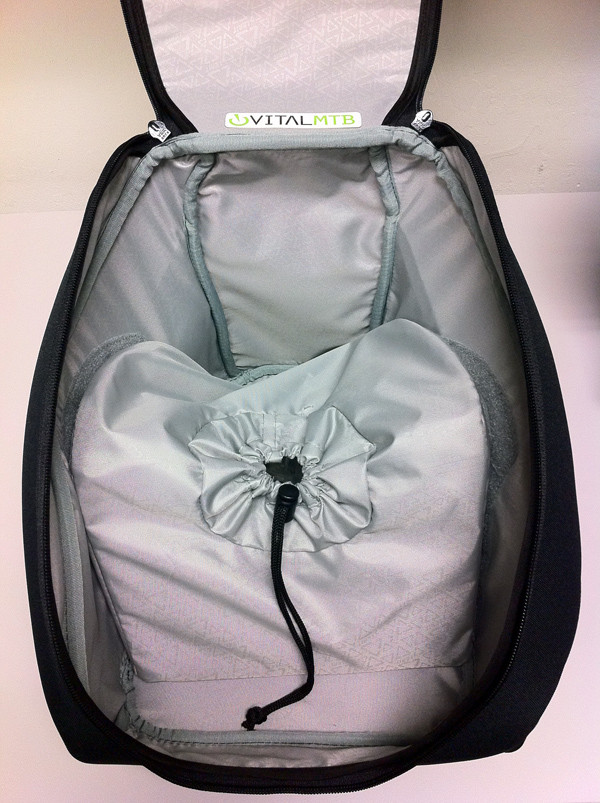 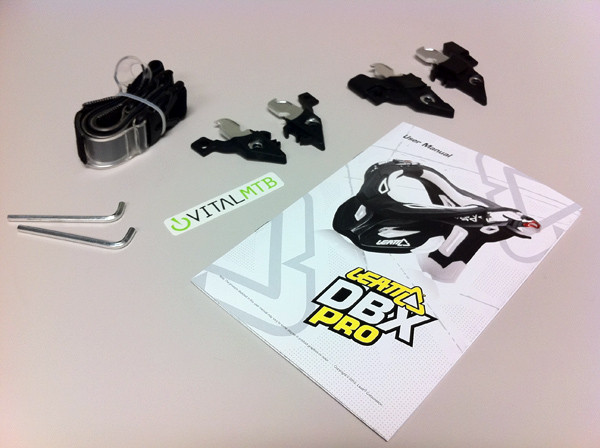 Now onto the good stuff... As soon as I grabbed the brace out of the bag, it was noticeably lighter than the other Leatt models. The DBX Pro weighs in at only 600g - 1.32lbs (My Moto GPX model weighed in at 850g - 1.87lbs). It may not look like much in numbers, but the weight loss feels huge. The DBX Pro does not offer and adjustments of the front and rear shelves, but the fixed position offers the most range of movement of all of the Leatt braces. 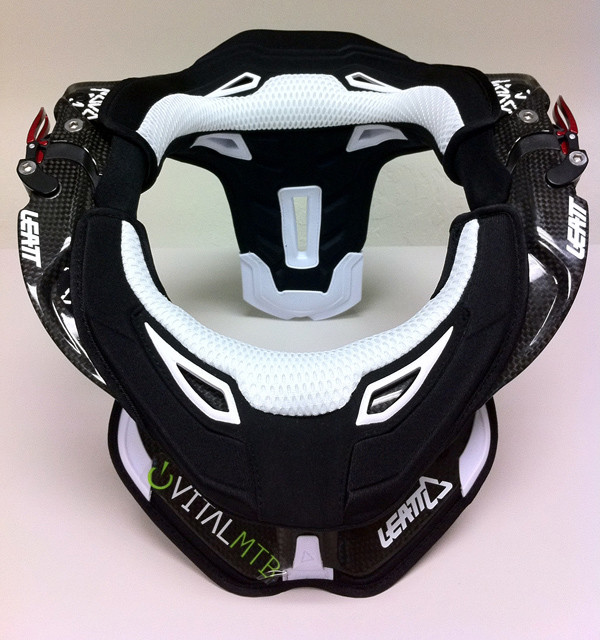 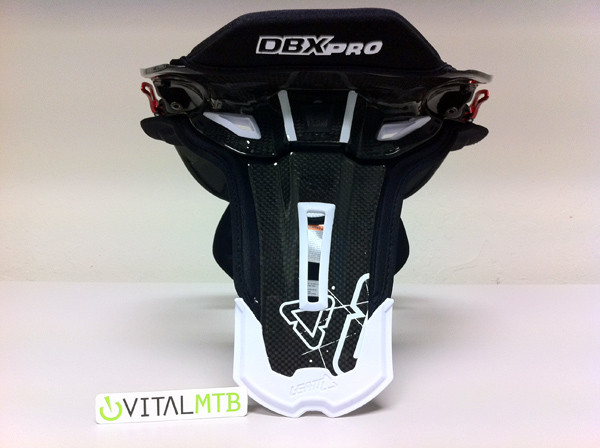 Another thing I noticed was the width of the thoracic support was a bit wider than the original Leatt brace. I checked with my current TLD gear that was Leatt compatible and didn't run into any issues with the fit, which was cool. 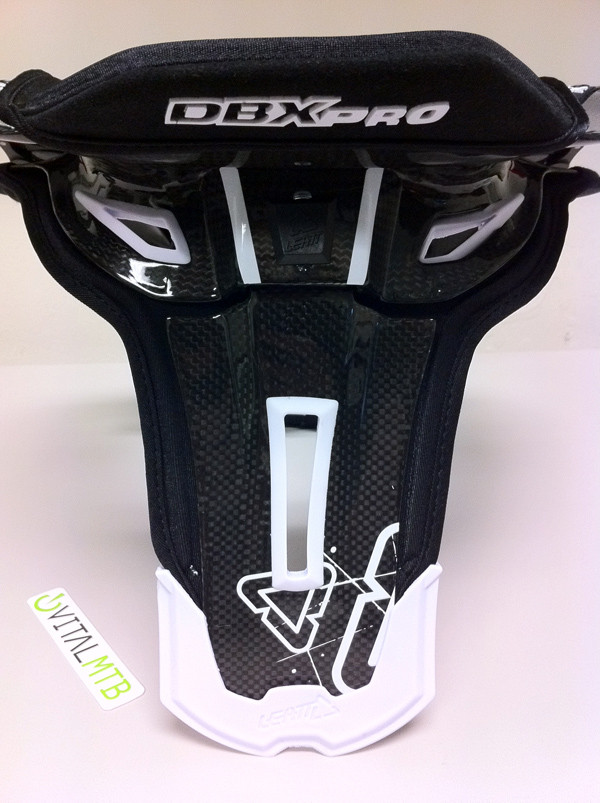 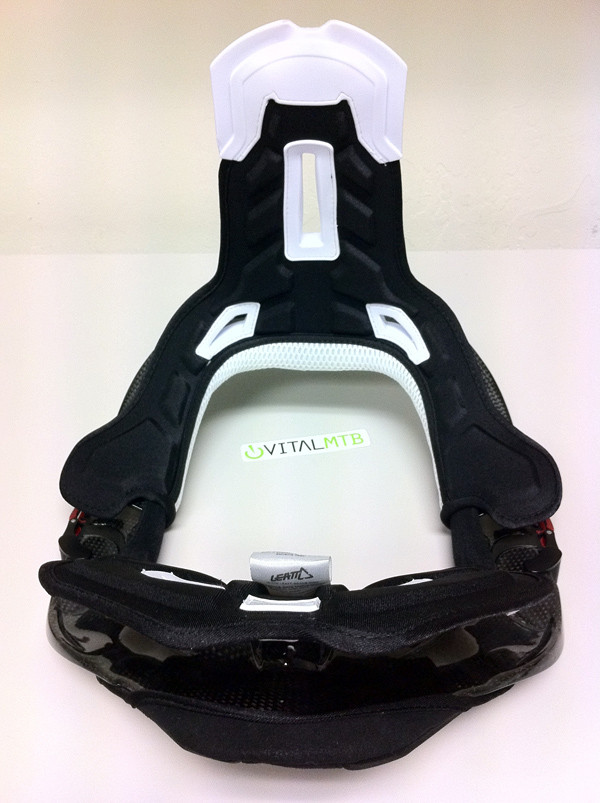 One of the new features on the DBX Pro brace is the new padding design. The new lightweight open celled padding attaches to the brace itself through the new vents. The padding has soft rubber grommets that pop into place on the brace itself. The venting is another new feature I am happy to see. I never really noticed the old brace making me hot, but there is nothing wrong with more cooling. The new padding design eliminates velcro on pads that eventually wear / get damaged over time and also means there are less pads to worry about when cleaning the brace (I know I have almost lost the small pads on the original Leatt a few times while cleaning them). The new design definitely makes eliminates that problem. 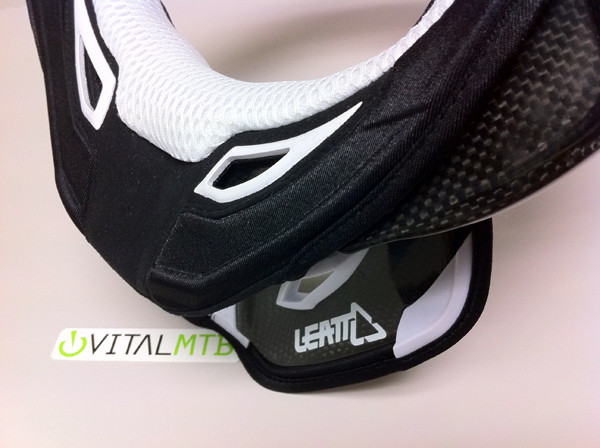 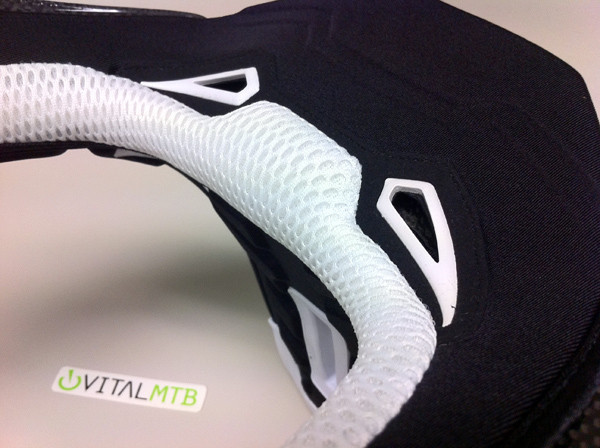 Another good feature on the DBX Pro brace is the aluminum spring loaded hinges. The new hinges just feel way more durable/solid compared to the plastic ones on other models. The spring assisted hinges also make putting the brace on easier because the hinge/latch springs right into place. It is a small enhancement, but is really makes a big difference on the ease of putting on the brace. 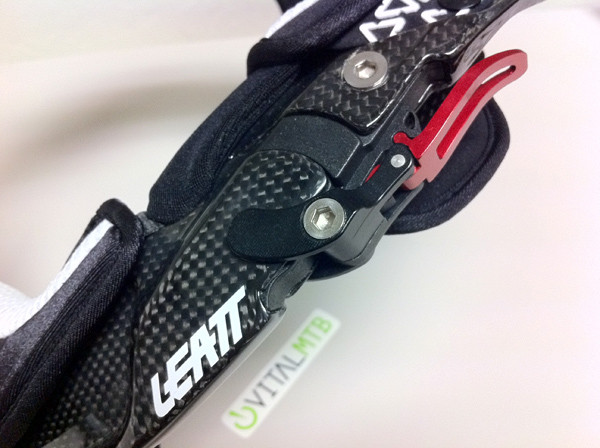 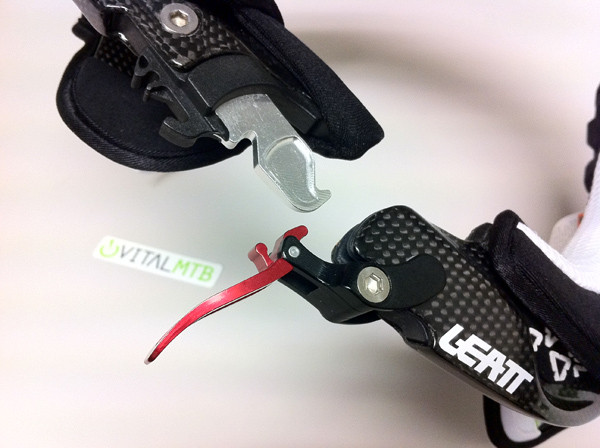 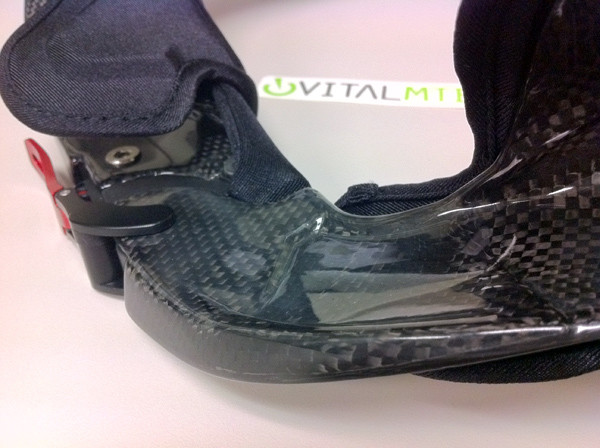 I took some comparison photos of my original Moto GPX brace vs. the new DBX Pro to show you the clearance between the two. My old brace has the shelves lowered as far down as they could go including the washer flip trick you could do on rear shelf to lower it a little more. 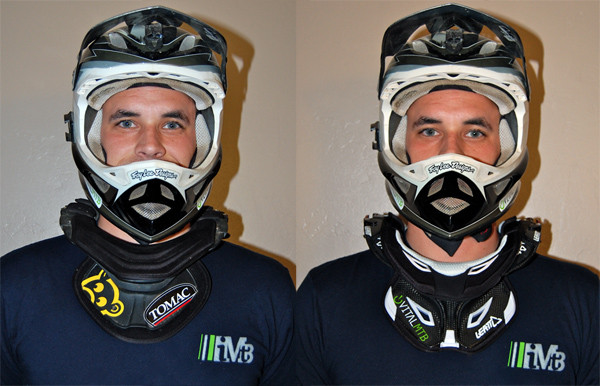 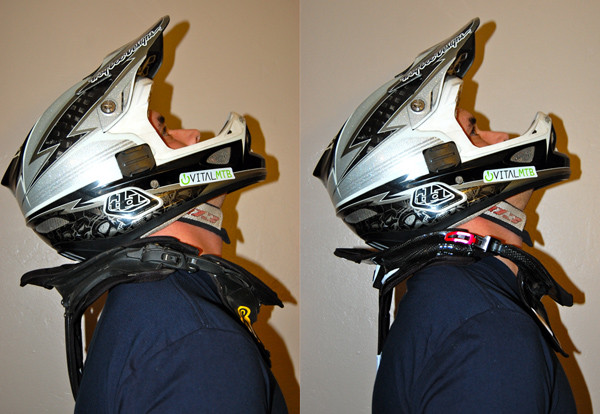 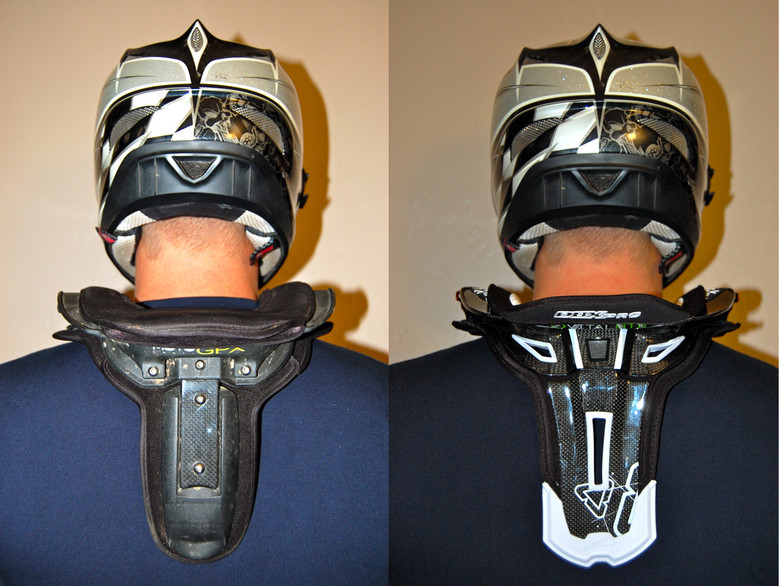 In Conclusion (So Far)
The DBX Pro brace was designed to be lighter, stronger, and give riders range of motion with still being providing top-notch safety. I would say they were pretty successful.  Leatt has really refined their design with this model. It has a lot of new subtle features/updates on it that I am really enjoying.
For me, after riding with the original Leatt brace for a couple rides, I didn't really notice it was there while riding. I really only notice it on really steep sections when looking up. So with the new clearance and weight savings, I can only imagine it would be even less noticeable.
A ride review is also in the works, so keep an eye out for it soon here on VitalMTB. If you have any questions, don't hesitate to ask.
Visit www.Leatt-Brace.com to view Leatt's complete lineup of products.