We tested the original Sony Action Cam and found it leading the market in some aspects, although we were not entirely convinced by the image quality it offers. From what we can see, Sony have now added features and also managed to make the camera quite a bit smaller for this new version, which sounds like marked improvements to an already good product. We'll reserve final judgment until we can lay our hands on one to check out the image quality in action. Still, the addition of GPS and the release of new mounting options, notably a chest mount should help keep this one right near the top of the class and a serious contender in this white-hot market. 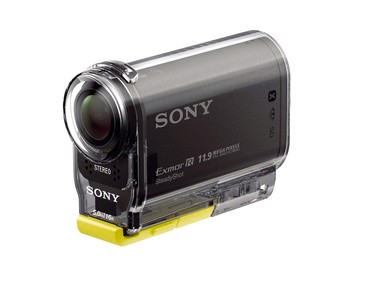 Embodying Sony’s industry-leading image quality, the new Action Cam weighs in at approximately three ounces (with battery) and ships with a ruggedized, waterproof housing that is 35% lighter and 25% smaller than its predecessor. The slim design relieves wind and water pressure when you’re cycling, jet-skiing or barrelling downhill and offers an ultra-compact point-of-view shooting solution.

Built-in Wi-Fi® allows users to instantly share their Action Cam content to a smartphone or tablet (using Sony’s free PlayMemories MobileTM) for easy upload and also allows control of the camera with any compatible device, including the new Live-View Remote (RM-LVR1). This optional wristwatch-style controller is waterproof and synchs wirelessly to the video camera, for hands-free operation when Action Cam is mounted in hard-to-reach places like helmets, kayaks or surfboards. Monitoring the Action Cam to ensure optimal shot framing is simple on the remote’s color LCD screen. The start/stop recording function and photo/movie modes are accessible from the remote as well. And with NFC one-touch connection support, it’s even easier to synch with Xperia® phones, tablets and other compatible Android devicesto operate the camera.

All Action Cam models offer Sony’s hallmark SteadyShot™ image stabilization to deliver stunningly smooth video and an ultra-wide angle Carl Zeiss® Vario-Tessar lens to capture all the action in a 170-degree field of view (120° with SteadyShot on), perfect for panoramic landscapes, dramatic ski slopes and more. The camera also features expandable memory with a Memory Stick Micro™ and Micro SD/SDHC/SDXC card slot, a built-in stereo microphone to capture all the exciting sounds of your adventure, and an HDMI® output (HDMI not included).

After shooting, there are several new, simple ways to enjoy and play back the day’s excitement. Transfer footage to aMac® or PC via USB then use the latest version of Sony’s free PlayMemories Home™ application to edit files and post to social sharing sites like Facebook® and YouTube™. Using data captured with Action Cam’s built-in GPS, Map View displays location and trail information. Multi View reads speed information recorded by GPS, creating an exciting speedometer-style video overlay. Two-Screen Multi View combines video files captured simultaneously with two different cameras, creating a split-screen composite that combines multiple points of view. And after a video is shot, Movie Rotation can turn the file clockwise or counterclockwise every 90° if the video was taken from left-to-right, in reverse, upside down, or when portrait orientation is preferred.

The new HDR-AS30V point-of-view video camera from Sony will be available in late September for a suggested retail price of $299.99, while the current HDR-AS15 model will be offered at a reduced price of $199.99. These cameras and their accessories will be sold at http://store.sony.com, Sony retail stores and other authorized retailers nationwide. For images and information, please visit www.sony.com/news. Find out more through http://blog.sony.com and make sure to catch what people are saying about #ActionCam online.