The sun made an unceremonial appearance at Fort William, but apart from this anomaly, the rest of the race day was vintage Fort Bill - huge crowds and redhot racing.

First up, in the junior's, what can we say about Martin Maes? He qualified second with a run that was his first full run down the track, as according to the Belgian wonderkid he had too much armpump during training and rested on the track to preserve energy. Going on to win here by more than 1 second, after not having ridden a DH bike for 6 months is testament to his sheer talent. Will we see more of him on the DH circuit?

In the women's, Tracey Hannah took the hot seat after a run that looked fast and fluid. Rachel Atherton and Tahnee Seagrave both suffered punctures, testament to how rough the Fort William track can be. Next down Ragot took 9 seconds off her own qualifying time and was clearly stoked with her run, but still fell 3 seconds short of Carpenter's first place qualifier. Myriam Nicole had a good run but failed to dislodge Ragot, and surely Carpenter was now on for adding to her World Cup win tally - it was not to be, a flat put an end to her hopes as well, and Ragot took the win for the maiden outing of the new Lapierre. There's surely got to be some room for improvement with regards to puncture protection in the market, as a side note to any inventors out there... 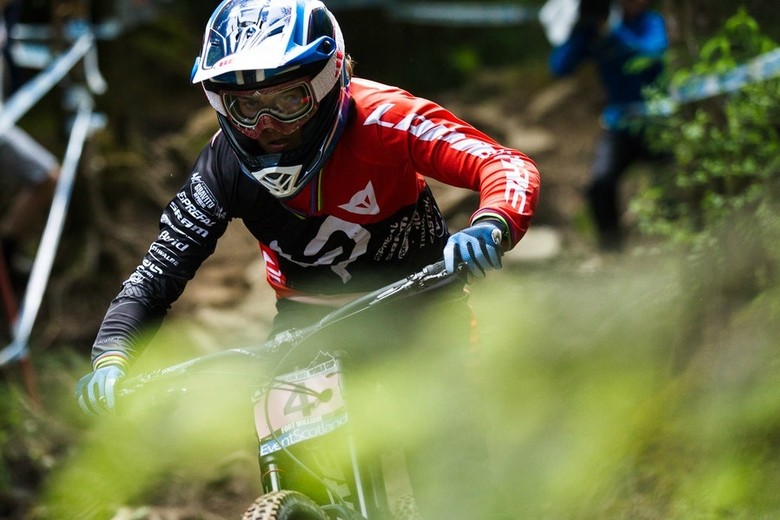 In the men's, local boy Greg Williamson threw down the early fast time with a 4:44, only 4 seconds off Danny Hart's fastest qualifier - a sign of things to come for the day. Sam Dale came down with a stormer of a bottom section, 4:42 and he took over the hot seat. Both Bruni and Bryceland would fail to dislodge him, and we felt a bit disappointed for the young guns on the day. But they were not to be alone in their sorrow, as rider after rider came down within sight of Dale's splits only to fall short on the motorway. How far would that run of Dale's carry him?

It took until Greg Minnaar to finally shuffle the hot seat, the South African laying down all the smooth power he could muster on the bottom section to make up for a slightly slow top section. 4:41 - was that the mark of the day, or would the times comes down under 4:40? By now, there were rain drops over the Fort, would that make it impossible for the fastest qualifiers to contend? Apparently not, because Stevie Smith fresh off his injury threw down a 4:40 to take over the hot seat! What a return! But his joy would be short lived, as we were soon to find out that the course was indeed running sub 4:40 as Gee came down with a 4:39!

Gwin next on deck, and after smooth and fast top section, he somehow found speed and power down the last stretch to take another 0.6 off the G-man! Blenki was down on the first split, before a puncture ended his day. And so, only three remained...

Next up the flat pedal thunder from down under, and Sam Hill laid down a run for the ages! We were on our feet as he crossed the line with an incredible 4:38, signaling Hill's return to top form. Hart then gave it his all, but came up an agonizing 0.4 short. Only the pocket rocket Troy Brosnan left up top, and what a run it would prove to be. Down at split 1, but up for the rest of the course, and an incredibly powerful last section saw him win his first ever World Cup. What a way to take a first win too!

In the overall World Cup standings, Aaron Gwin retains his lead with Troy Brosnan moving into second place. Manon Carpenter takes the lead in the women's, with Rachel Atherton seeing herself disqualified for receiving outside assistance after a spectator helped her untangle a piece of inner tube from her cassette and thus forfeiting any points she would still have received for finishing her run.

Catch up with the full standings after 3 rounds: 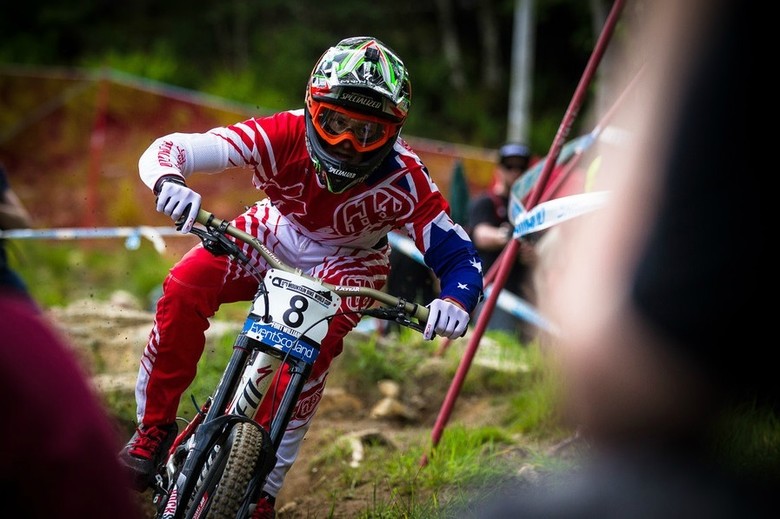 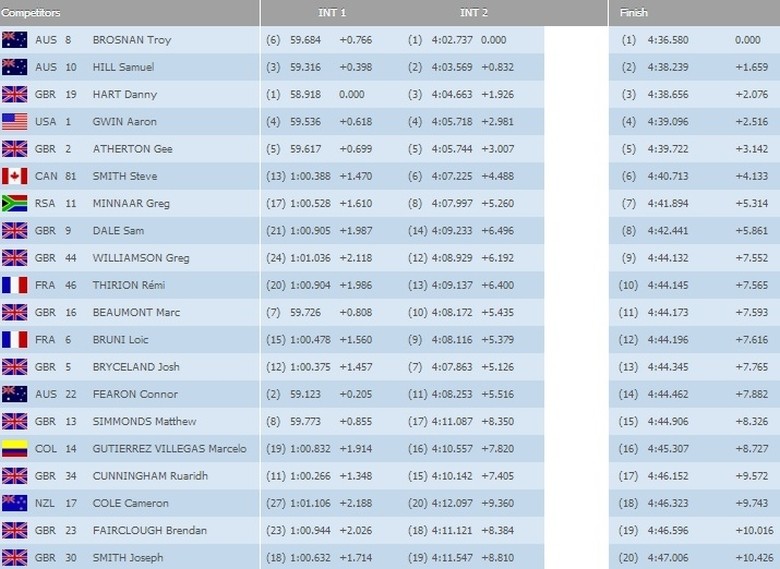 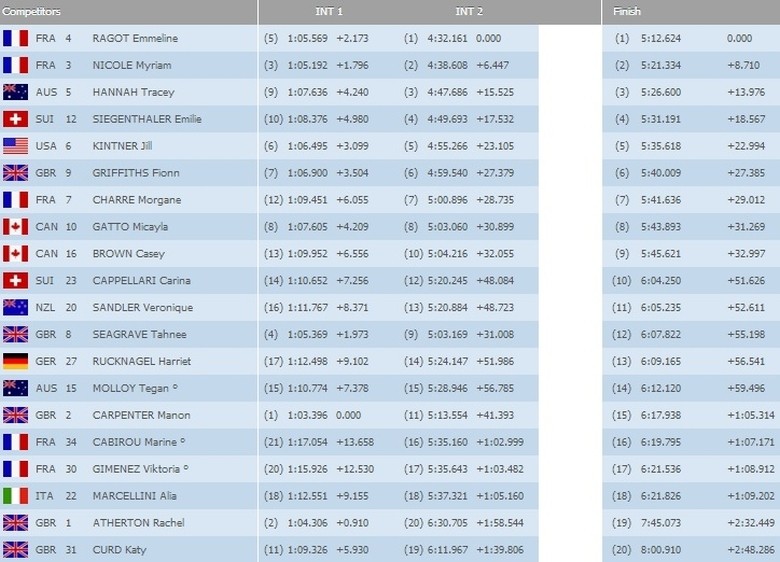 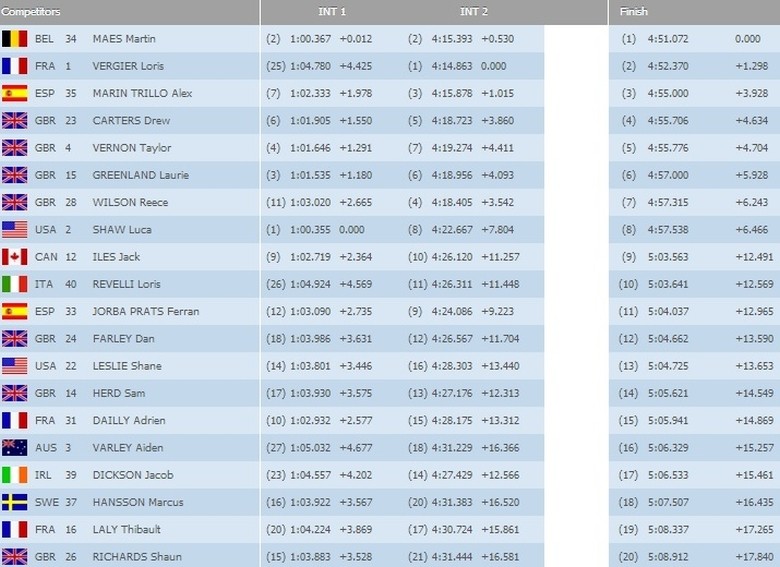