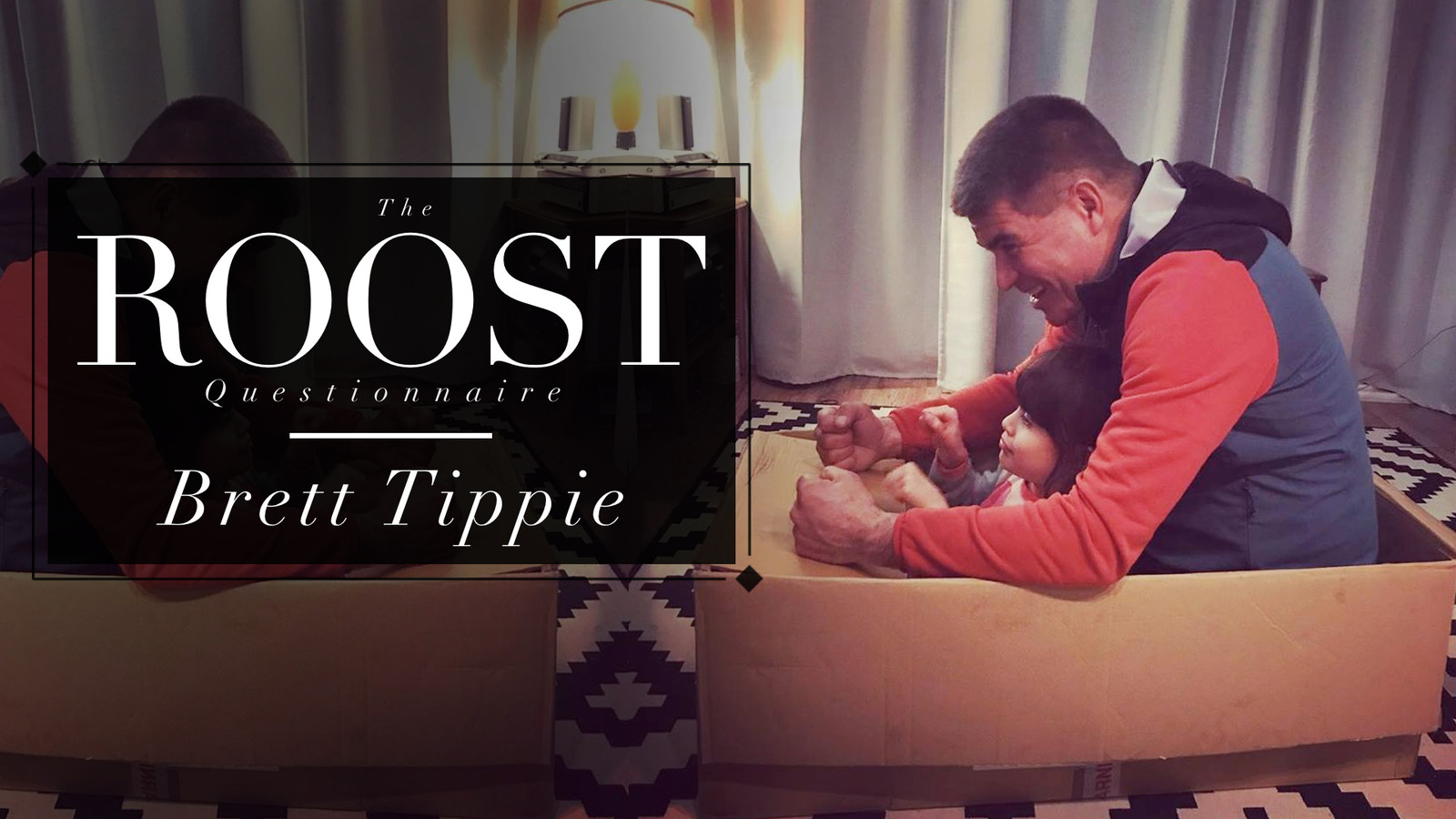 Brett Tippie, age 49, helped redefine the sport of mountain biking at a time when it desperately needed redefinition. Mountain biking in 1997 needed heroes, and in 1997, the province of British Columbia gave mountain biking the Froriders. Tippie, Wade Simmons, and Richie Schley were the new school; they led the charge. What’s more, Tippie’s achievements riding mountain bikes came on the tail of a successful snowboard racing career. Tippie is a renaissance man: an athlete, an announcer, a host, a character, a comedian, a husband and a father. A loud and rowdy legend in the spirit and vintage of Cedric Gracia and Steve Peat, a true elder statesman and dungeon master of our sport. Here he ruminates on Aggy, Frisbee, Champery, Marzocchi, and family.

What is your second favorite sport or athletic endeavor?

My second favorite sport would be snowboarding. I love to ride powder, hardpack, slush, gravel, sand or anything actually. I started snowboarding and mountain biking in 1983 and have been in love with both since. I actually started racing pro in snowboarding in 1991 and turned pro in MTB in 1997. I raced for the Canadian National Snowboard Team and was sponsored by Burton Snowboards which were both dreams of mine. I retired from pro racing in 2000 as the Canadian Grand National Boardercross Champion. I still ride as much as possible and love it when I can do both sports in the same day here in North Vancouver, B.C.

What is your favorite non-mtb bicycle or vehicle?

My favorite vehicle is my Toyota Tundra. I use it to access the mountains, and shuttle when I can. I have a Tepui fold up tent on the top of my canopy and can camp wherever I want. I dig the roar of the engine!

What is your preferred or ideal post-ride ritual?

After a ride, I enjoy a quick Frisbee session. I even have a disc with a light so I can chuck it around with someone after a night ride, too!

Which mechanical glitch, imperfection, or problem will you tolerate on a ride? Which can you not tolerate?

I will tolerate flat tires because what else are ya gonna do? Fix em and keep shredding! I can not tolerate skipping gears. They make you feel like a hack, and can be dangerous if they skip in the wrong place!

Hard to believe this hilarity is 6 years old.

What bicycle maintenance procedure do you most enjoy?

I love to wash my bikes and probably wash them too much, but I like to see a dirty bike transform into a shiny, clean one.

I would definitely turn my bike as much as I like, but never again have my tires leave the ground. My favorite tricks are left and right turns and sinewy, winding trails through the terrain inspire my soul. I might have said something different in my 20's and 30's because I was all about drops in the golden age of freeriding, but I'm almost 50 and wanna slash some turns more than huck myself off things these days.

I would definitely rather ride current geometry and some 15-year-old suspension. Geometry makes such a big difference and would make the ride more enjoyable than new suspension on 15 year old angles. I remember Marzocchi Z1 open bath Bombers 20 years ago feeling pretty good!!

What do you consider to be the greatest World Cup or World Championship race run of all time?

What do you consider to be the greatest injustice in mountain bike history?

What do you consider to be the greatest bicycle paint job ever?

My glow in the dark YT Industries paint job in red and white that I'm going to reveal in 2018!!

If you could move one World Cup track to another World Cup venue, which would you move, and to where?

I'm not sure which one I'd remove, but I'd love to see a World Cup DH at Whistler or the Sun Peaks Bike Park in Kamloops, B.C. They both have sick terrain, big vertical and I'd love to see the worlds fastest riders shred trails that I know and love at mach speeds. It'd be so cool!!!

Which is your favorite World Cup race track?

I like watching racers hang it out in Val di Sole but have always enjoyed a classic Mont-Sainte-Anne race!! One of my highlights as a video host was joining Stevie Smith on the MSA track walk at the 2010 World Championships where he shared his lines and gave a low-down to the Vanderham brothers and me. It was amazing. Then he hammered those lines and got silver behind Sam Hill.

What is your favorite color for a bike frame?

Usually red, or red and white Canadian style, but I'm going to have to say glow in the dark!! (I really like a Ritchey Ultra I had in 1991 with a pearl white paint job that had various, barely-perceptible colors show in certain light.)

What is your favorite vintage downhill bike? (pre-2002 only)

I've only really ridden one; my Rocky Mountain RM9 that I got from Dave Watson that he raced WC on and I used to shoot the Turkey segment in Kranked 3, Ride Against the Machine.

What is your favorite story or legend in downhill history?

Wow, tough to have one favorite. Any of the insane runs by Sam Hill, Kovarik winning by 14 seconds in '02, Danny Hart winning by 12 seconds in '11, Peaty finally winning rainbow stripes, Gwin winning with no chain, Nico Vouilloz's 10 World Championships, Palmer almost beating Nico at Worlds, Cedric beating Nico by 9 seconds in 2000, Minnaar still winning races, Anne Caro's list of wins, Rachel's perfect season, local B.C. girl Holly Feniak’s Jr. World DH title, Miranda Miller winning Worlds last year after her history of untimely injuries etc...how do you choose? I'd have to say small town B.C. boy, Stevie Smith, getting shuttled by his mom for early training then going on to have the career he did, and winning the World Cup DH Overall would be my favorite though. Long live Chainsaw!!

What is your favorite story or legend in freeride history?

Oh man, here we go again! I have too many legendary Frorider stories to tell;  early, gnarly freeride and party shenanigans that were never on camera! I have always enjoyed seeing Aggy, Zink, Andreu, Sorge, Claw, Strait, Doerfling, Bender, Vink, Super T and all the Rampagers send it, but really like how Wade won the 1st Rampage, how Claw got Cory LeClerc's spot for Rampage in 2002 and got 3rd out of nowhere, Paul Bas borrowing a bike and winning the Crankworx Slopestyle...twice, local Whistler kid, Semenuk, rising to greatness. B.C. boy Sorge winning 3 Rampages, Gee crossing over from World Cup DH to Rampage and getting 2nd place twice with crazy runs, and have always thought Ben Boyko's Crankworx Slopestyle victory lap in 2007 was rad because he spun the final huge drop with a flat landing again and it was even better than in his winning run! These are all mostly competitive freeride stories though and real freeride to me is about the absence of competition, having fun and sending it. Any of the rad adventures I've had with cool people in amazing new locations would be my favourite. If I had to choose one? It would be the next one!! Haha!

What cycling industry job would you try that you haven't already?

CEO of my own company.

What is the biggest or best gift mountain biking has given you?

It has given me freedom to travel the world, make awesome friends, do a job that I enjoy, and I met my amazing wife (who loves riding mountain bikes) at Crankworx Whistler and we have two beautiful girls together. I am very thankful.

Where is the best dirt in the world?

B.C. rainforest loam and damp Kamloops clay are wicked, but Retallack dirt is the best I've ever seen...on this planet!! Haha!