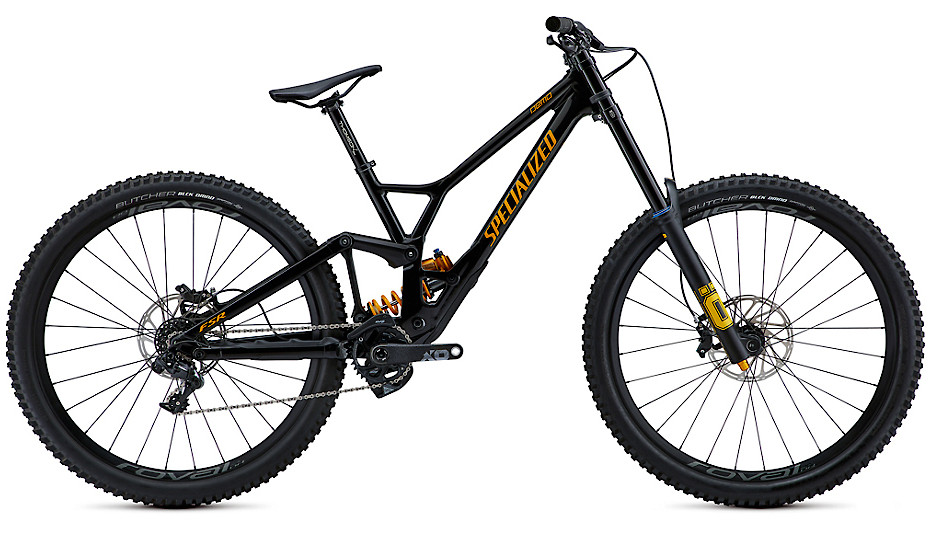 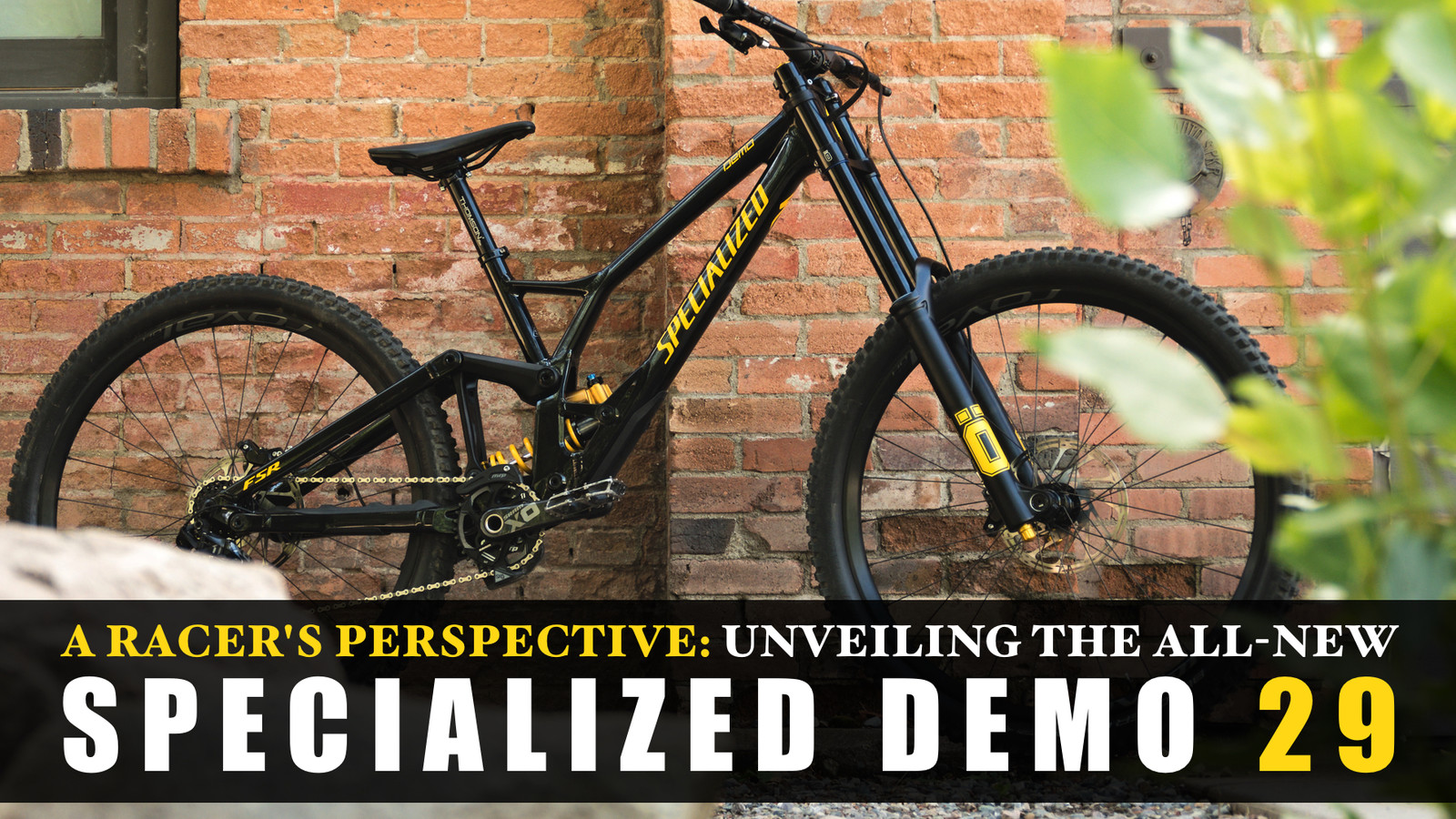 Ihave learned a thing or two over the years of racing downhill – how to separate the wheat from the chaff as the old saying goes. So when I got the call to swing my leg over one of the most anticipated downhill bikes, from one of the most established brands, at one of the premier downhill riding destinations in the PNW, it took one second to say emphatically, “YES!” I was excited to give the all-new Specialized Demo 29 a good shakedown on tracks I’ve been between the tape on before, and I was prepared to chase Loic Bruni or Finn Iles through the damp woods of Dry Hill located just outside of Port Angeles, Washington. Instead, former World Cup warrior and the person with the most hours aboard the Demo 29, Specialized R&D Product Manager Brad Benedict would be my proverbial carrot.

Over the course of a few days, I asked myself: Why would I consider the Demo 29? How does the Demo 29 fit my needs? What does the Demo 29 do well? Come along for the ride as I answer these questions and dive deep into the minds behind the machine: 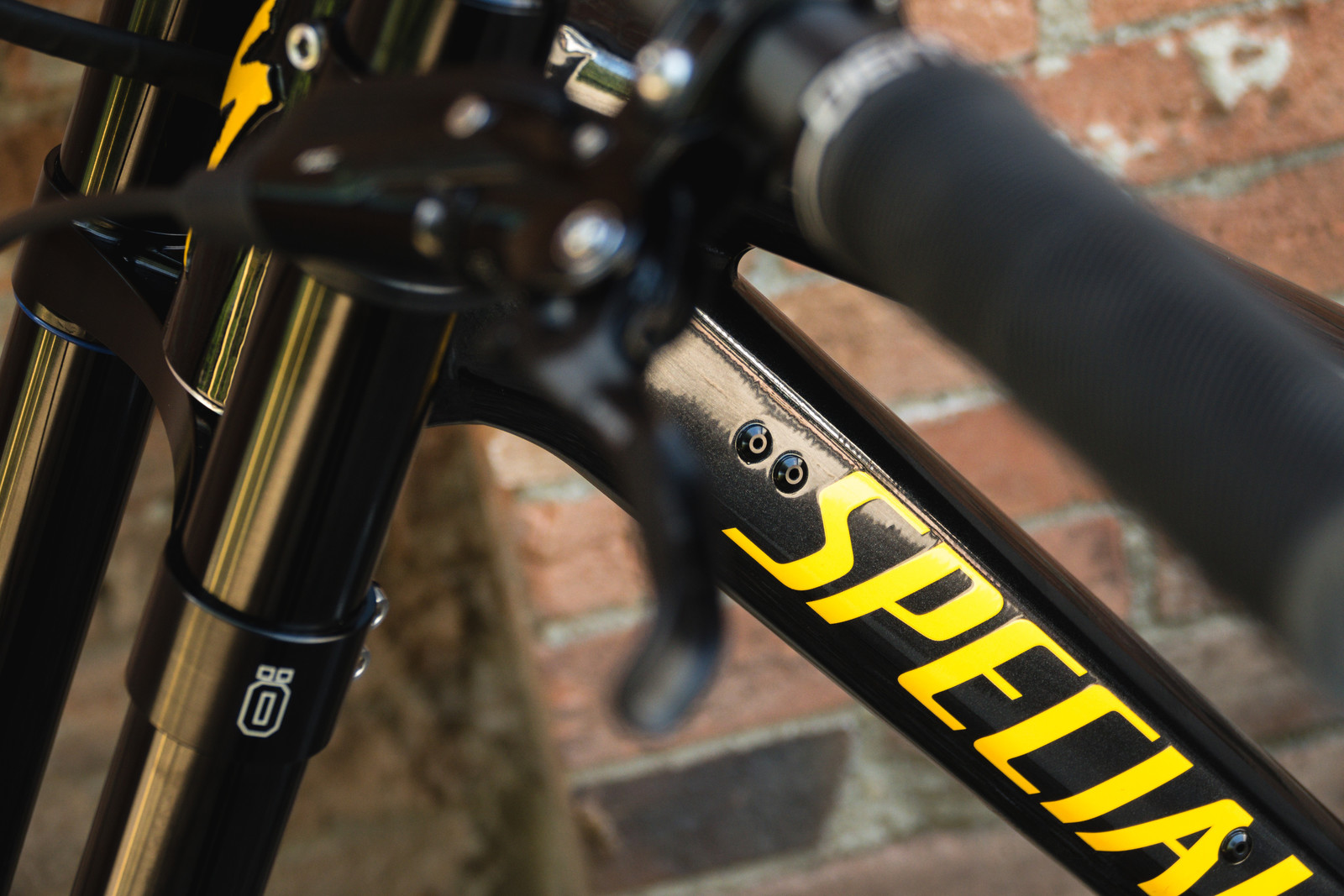 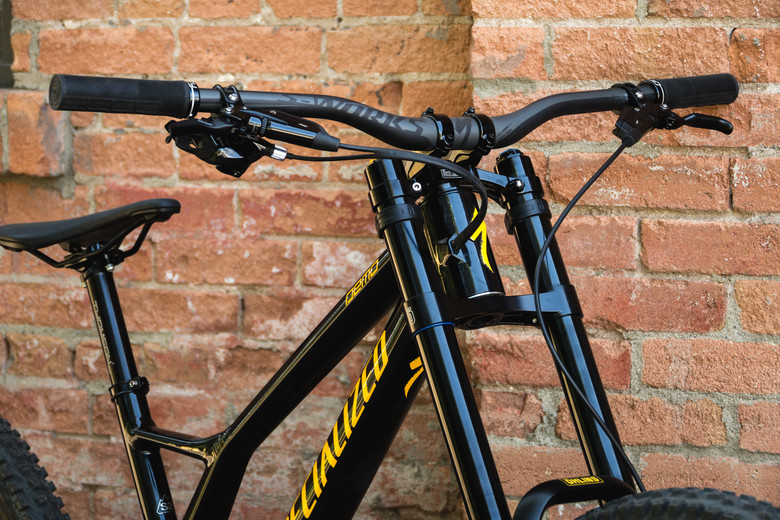 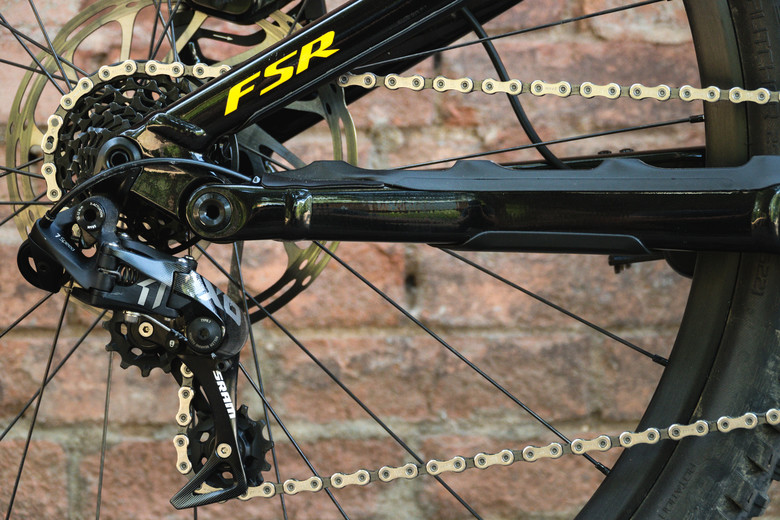 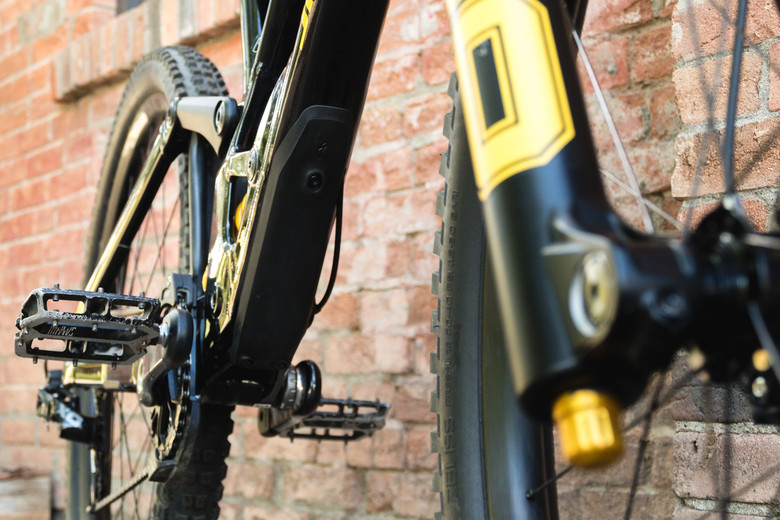 From the outside, the Demo 8 looked incredibly dialed and has been piloted to a handful of rainbow stripe jerseys. I mean, how good did Loic’s bike look in 2017 and 2018? Knowing this I asked those responsible for the new Demo 29 the obvious question, “Why change anything?” Brad stated, “What we were working with prior didn’t allow us to make the changes that we thought were going to be necessary, so we gave the engineers full reign to do whatever they needed, on whatever platform was necessary.”

The Demo 8 was fast under the right riders, however, a laundry list of imperfections was identified by a few rounds of Specialized athletes. Brad elaborated, “The bike that we have today is the culmination of all of those athletes and all of their feedback. More engineers and research has gone into this bike than we’ve ever done on any bike that we’ve ever made.” 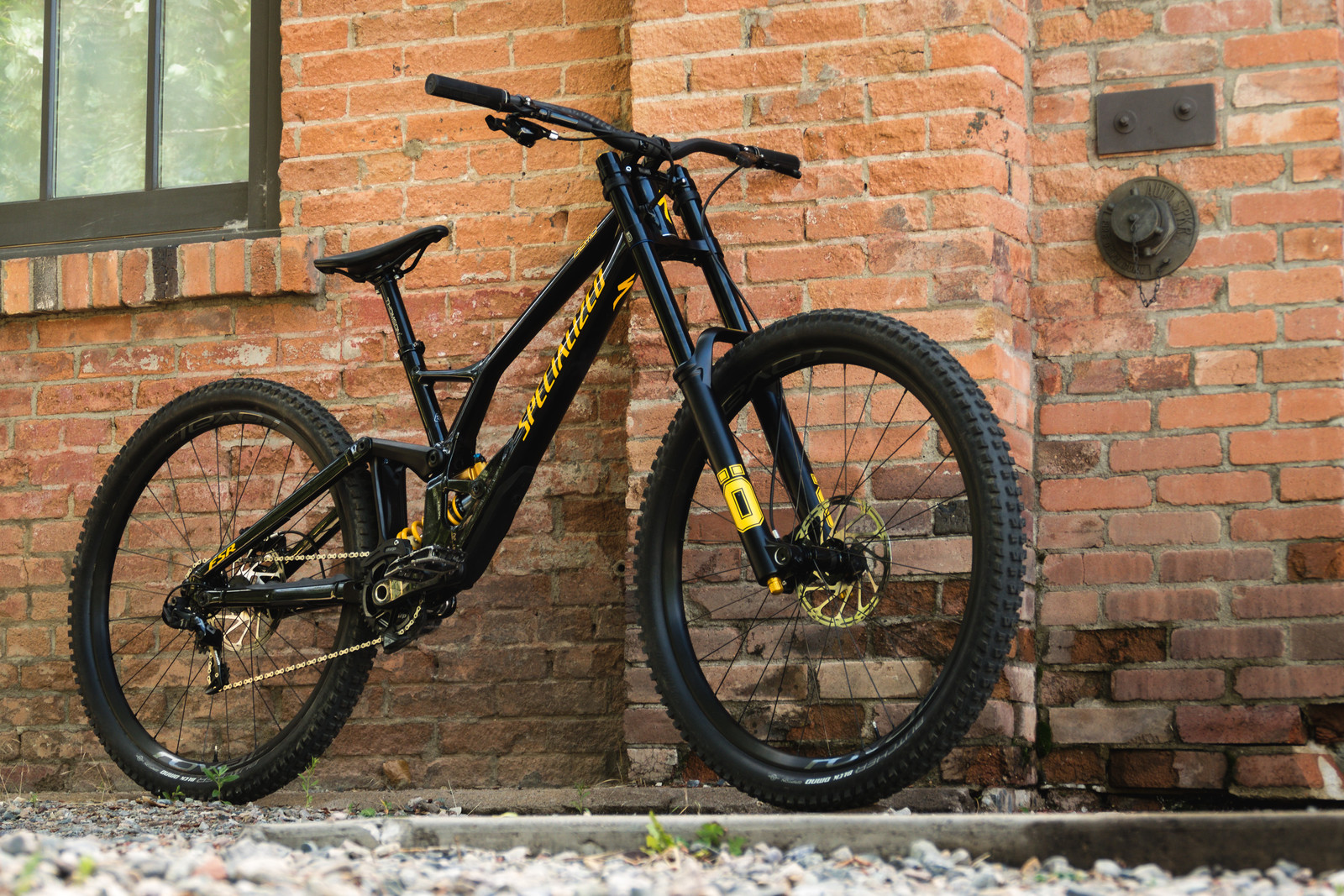 What exactly were the imperfections with the Demo 8? The common feedback validating the direction of where the Demo 29 needed to go was broken down into three main points:

“The overarching point is how do we build the fastest bike? The process of figuring all of those out was the longest process we’ve done,” Brad remarked in a tired tone of voice. It's been a long journey, starting with the purchase of a dozen or so competitor downhill bikes with months devoted to test riding while engineers dove into the kinematic files. A sixteen-foot ramp with various obstacles was constructed to expedite data collection in a controlled environment. The goal was to find something interesting about every bike, accentuate the positive points, and get a clear perspective of where Specialized stacked up against the competition. This was a much different way of going about things as Brad commented: “In the past, we’ve only focused on our own bikes.” The blank slate approach led to inspiration and some serious kinematic creativity. While not wanting to abandon FSR, engineers looked at how to utilize it differently with an eye on where the sport was moving in the future. 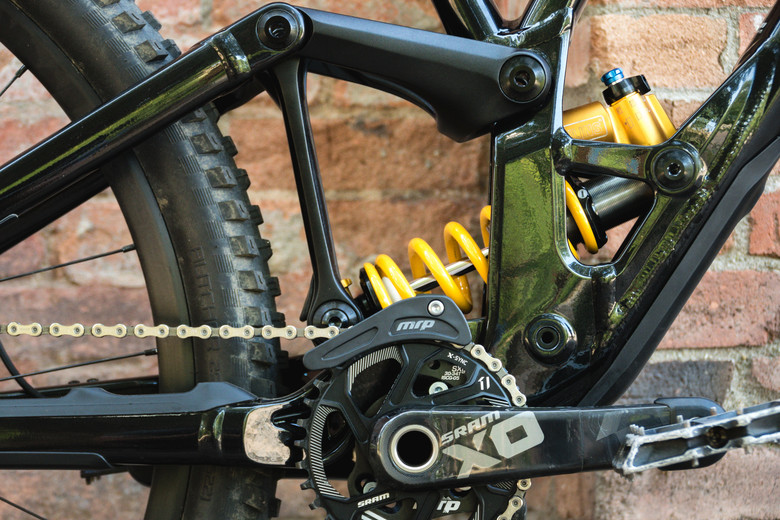 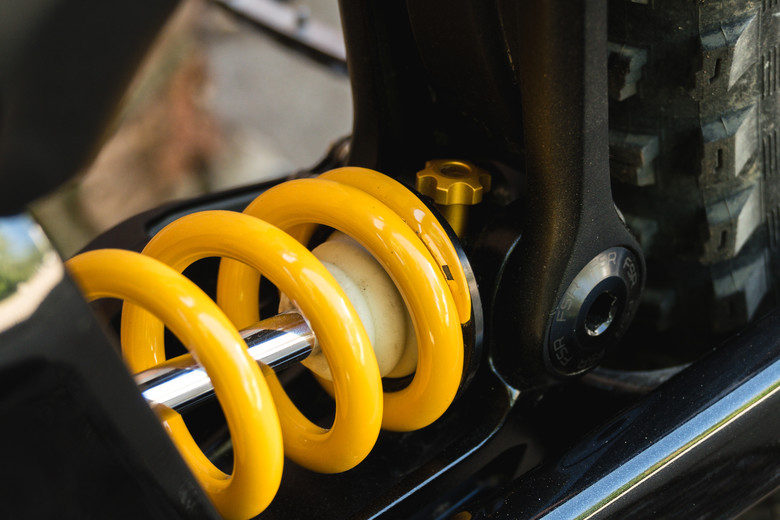 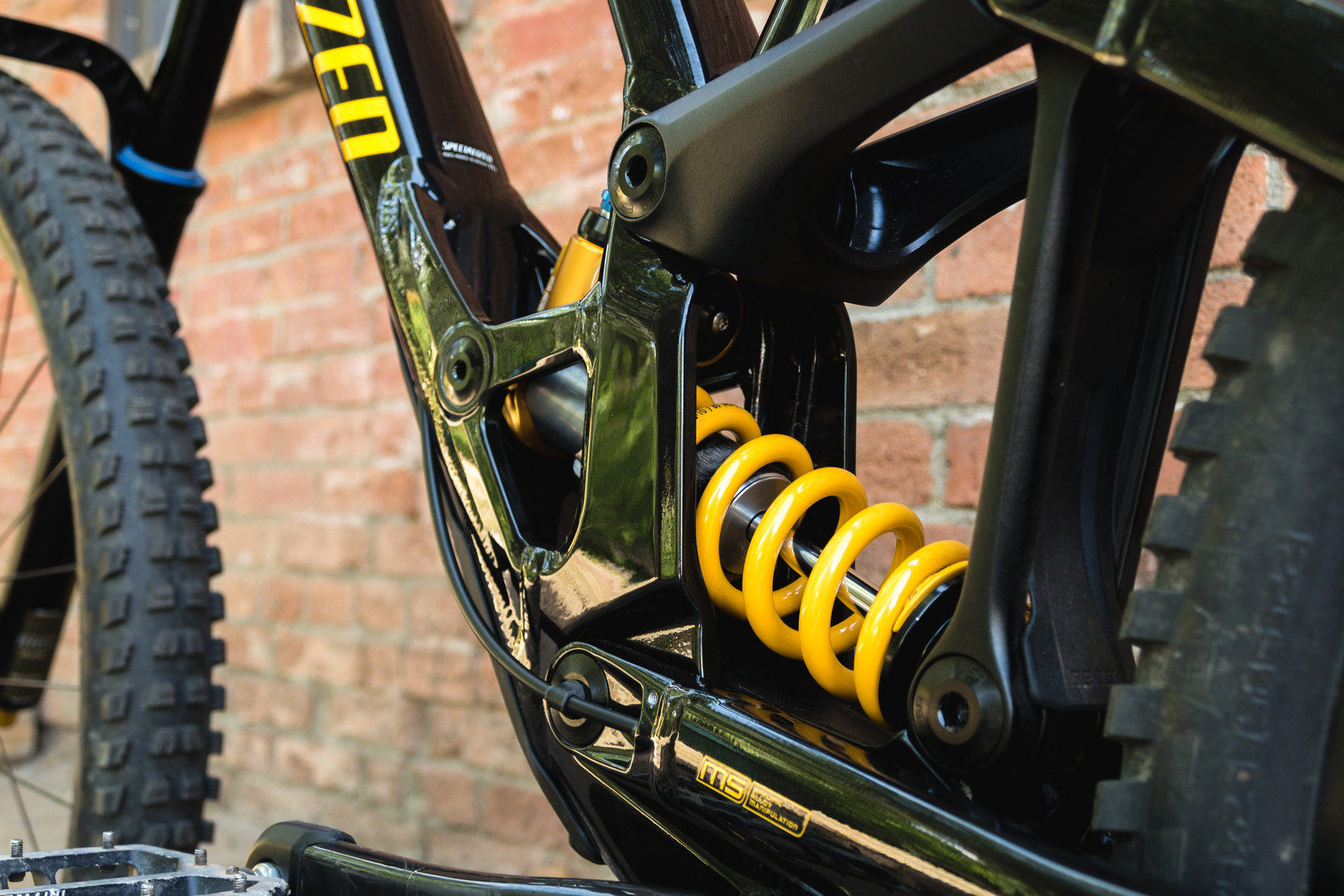 Wait a second… the frame is going to be made out of metal? That doesn’t sound too futuristic! Product Manager Steve Saletnik assured me that this was the right material, saying, “Making the bike out of metal just makes a lot of sense. This bike is setting the foundation. We’re learning so much developing this chassis that we want to be as flexible as we can. All of the stuff we are learning from this bike is going to filter through into all of our other bikes.” Even so, carbon will likely be in the cards in the future. For now, Specialized’s ability to evolve quickly with athletes has become a priority. As Brad admitted about previous experiences, “We kinda got this stuff a little bit backward. This is redefining the direction of how we are going to develop downhill bikes with athletes.”

There are a crazy amount of resources atop Morgan Hill at Specialized headquarters, and for this project Brad utilized them all. “When we want to do anything, we just do it.” So, what did they DO to alleviate the three main points?

It may sound relatively simple when presented with these solutions on paper, but it blows me away learning about the amount of time and energy that has been put into this project since the first prototype put its tires on dirt two years ago. 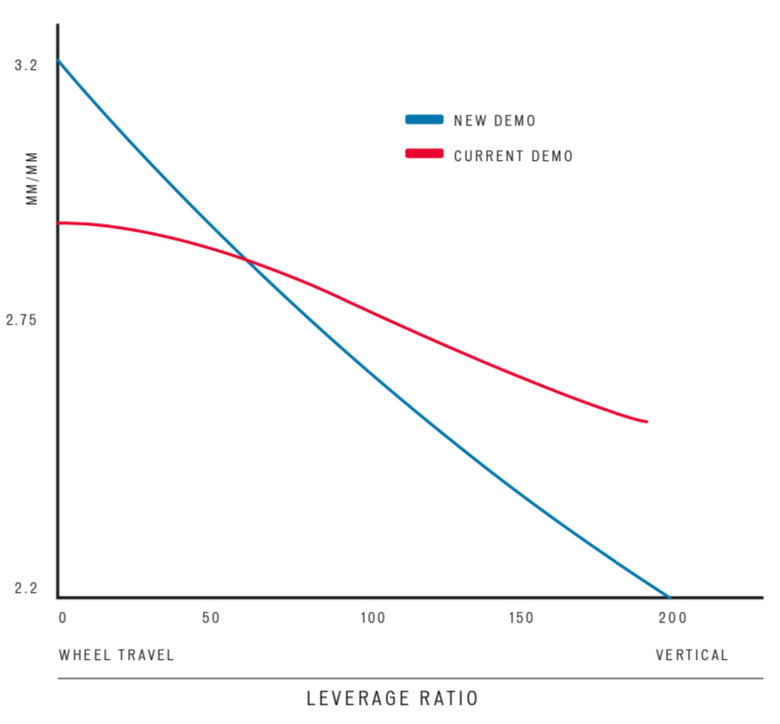 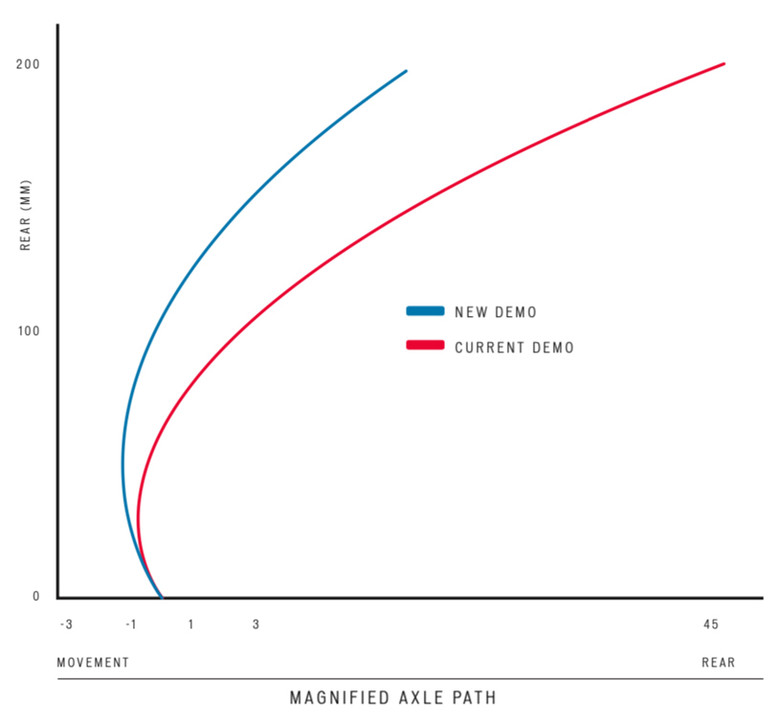 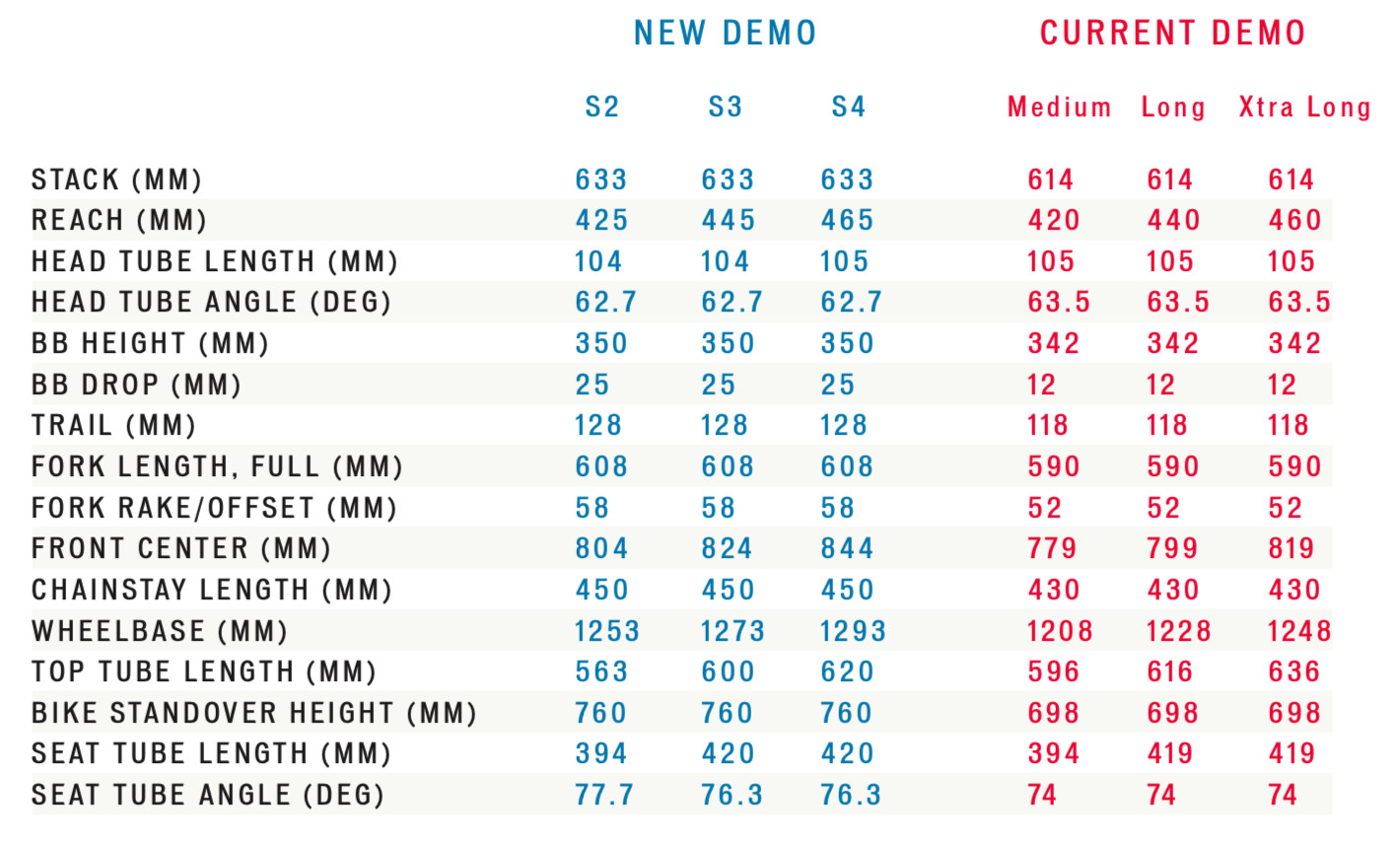 It really does seem like Specialized hasn’t left a stone unturned, yet there is still one question to ask: What about a 29/27.5 wheel configuration? Loic has made it pretty clear that he is not a big fan of wagon wheels. Like many – due to the 2019 UCI wheel size rule change – he is currently running a mullet style “moto” setup and enjoys riding it more versus 27.5 wheels front and rear. Loic is a rare case where Specialized will not turn away from his desire to run this setup, but as Brad puts it, “29-inch rear wheel on the old bike hits him in the ass. 29-inch rear wheel on this bike doesn’t hit him in the ass. That’s the attribute of the braking that we were trying to accomplish to where he doesn’t have the demand to shift his body super far back, he is much more balanced.” It sounds like Loic may have to warm up to the idea, but for now he is comfortable riding the wagon wheel up front only.

For those Super Bruni fans out there, the 29/27.5 setup will not be offered for purchase this season. However, time will tell how this story ends. Both Finn and Loic are constantly testing all available setups and, within reason, Specialized will supply them with whatever will help them push the limits while helping develop bikes. Brad concludes the discussion on this hot topic by emphasizing, “If it truly is faster and more efficient then this will be the direction that we go, but as of right now we are going with his confidence and comfort - a 27.5 rear wheel on a geo-corrected rear end.” 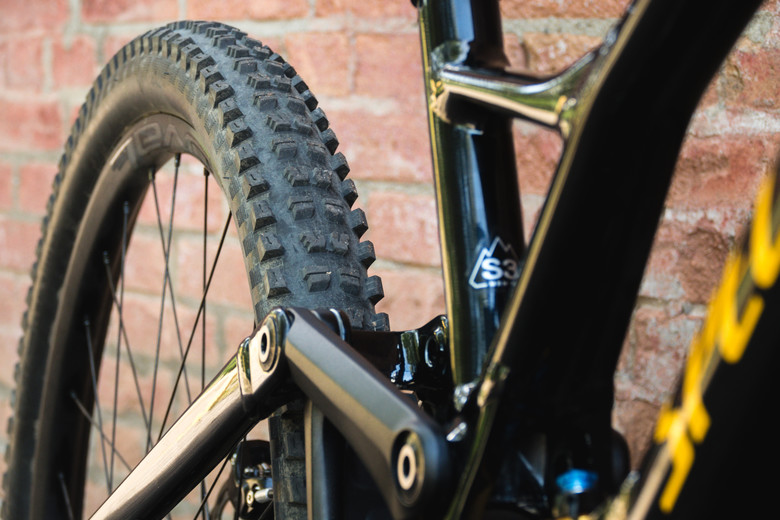 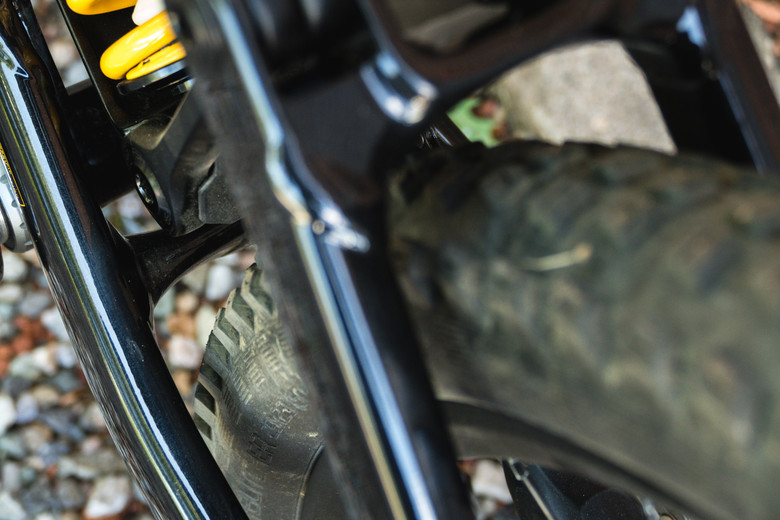 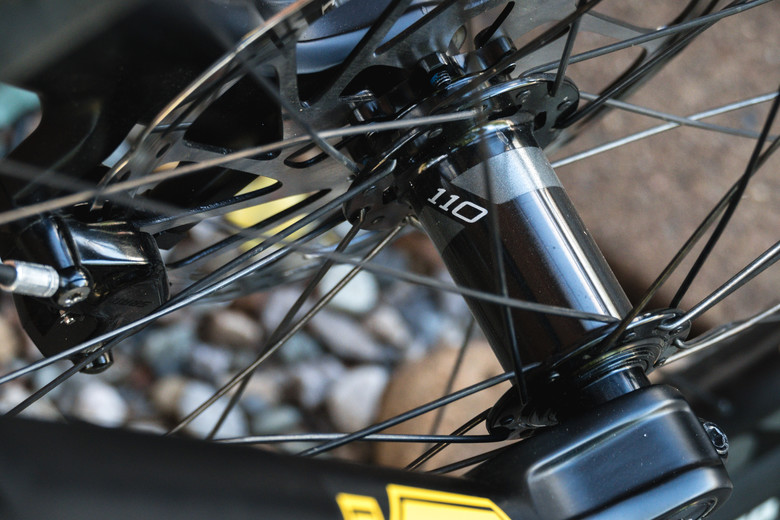 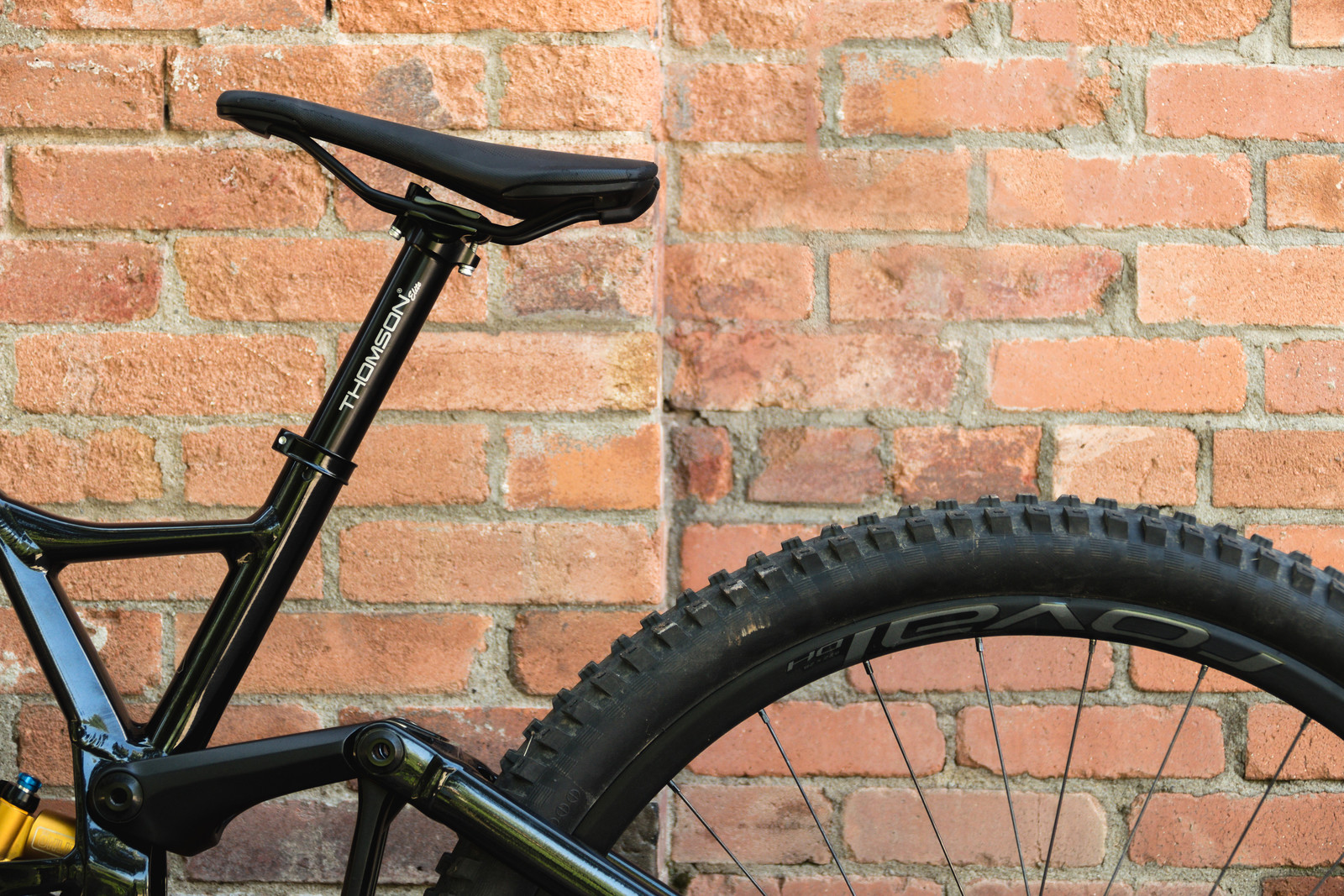 After getting schooled up on the why, how and what in the conference room, I felt very familiar with the bike even before putting rubber to dirt.

Racing is likely a top priority for anyone considering this machine; to be successful it doesn’t matter how great the bike is, the suspension and brakes have to be on point. Without much prior experience with the Öhlins brand, I entrusted Brad and the boys using their recommended suspension setup for a rider of my weight and ability. During the two days of testing I didn’t feel compelled to turn, twist or click the DH 29 fork or TTX coil shock. I’m not a prolific puzzler like many athletes at the pointy end of the sport, and to be honest I wasn’t searching for tenths of a second at the time. The suspension front and rear felt very balanced providing a very stable ride across all terrain that enabled me to push the bike and myself as hard as possible. Not to say I nailed all of the lines, but the SRAM Code RSC disc brakes worked without issue whether or not I did. This leaves the rest of the bike to work as it should, but did it? Dry Hill’s test tracks provided almost everything you could ask for.

What I noticed immediately is that I didn’t feel like I was navigating wagon wheels. It was a balanced ride making it easy to stay in attack position without needing to move too far fore and aft, thus instilling confidence when reaching high speeds.

There were numerous occasions where I launched into some pretty rough impacts with heavy braking into tight turns, providing me the opportunity to feel the effects of increased anti-rise. There weren’t any noticeable moments of feeling the bike “pitching” me forward, rather I was successfully able to maintain attack mode and enter turns balanced.

I was riding flat pedals and my feet were relatively quiet. Instead of feeling any harshness I was comfortably able to focus on the trail without getting hung up. Add exceptional momentum carry, plus more user-friendly braking characteristics and it really does equal a comfortable ride top to bottom. Dry Hill’s terrain is relatively smooth in the full spectrum of DH, however, lacking any truly rough sections which will have to be evaluated later.

The story behind this bike is as compelling as it is to ride. Components and suspension included, the Demo 29 is a race-ready machine that will allow the masses from beginner to World Cup level to excel and succeed.

At just over six feet tall I felt a little in between sizes so I tested both S3 and S4 sizing. I landed on the larger S4 frame because it gave me more comfort within the cockpit at high speeds. This did hamper my ability to feel quick through tight turns or make quick direction changes, however. When we hit the jump trail I labored to maneuver the wheels to make any shapes and manualing/jumping didn’t feel natural straight away. It took time to understand the characteristics of the bike in relation to these movements, but by the end of two days I felt more competent.

Something I felt straight away in comparison to the previously tested Demo 8 was the more progressive rear end when really pushing into bermed turns. This eliminated the fictitious flat tire sensation allowing me to crack on comfortably with more control.

What about all that anti-squat? Something often overlooked with downhill bikes is their pedaling ability – they’re referred to as “push bikes” after all. Specialized obviously addressed an issue here by adding 300% more anti-squat at sag, providing a very stable platform to apply full power out of the start gate and down the first straight before gravity was able to assist.

Obvious maintenance issues? Hardly. There was a mechanic on call if any issues did arise did our ride time, however he was kept busier drinking beer than having to wrench on bikes. Address the internal cable rattle with a crafty fix and you’re golden. 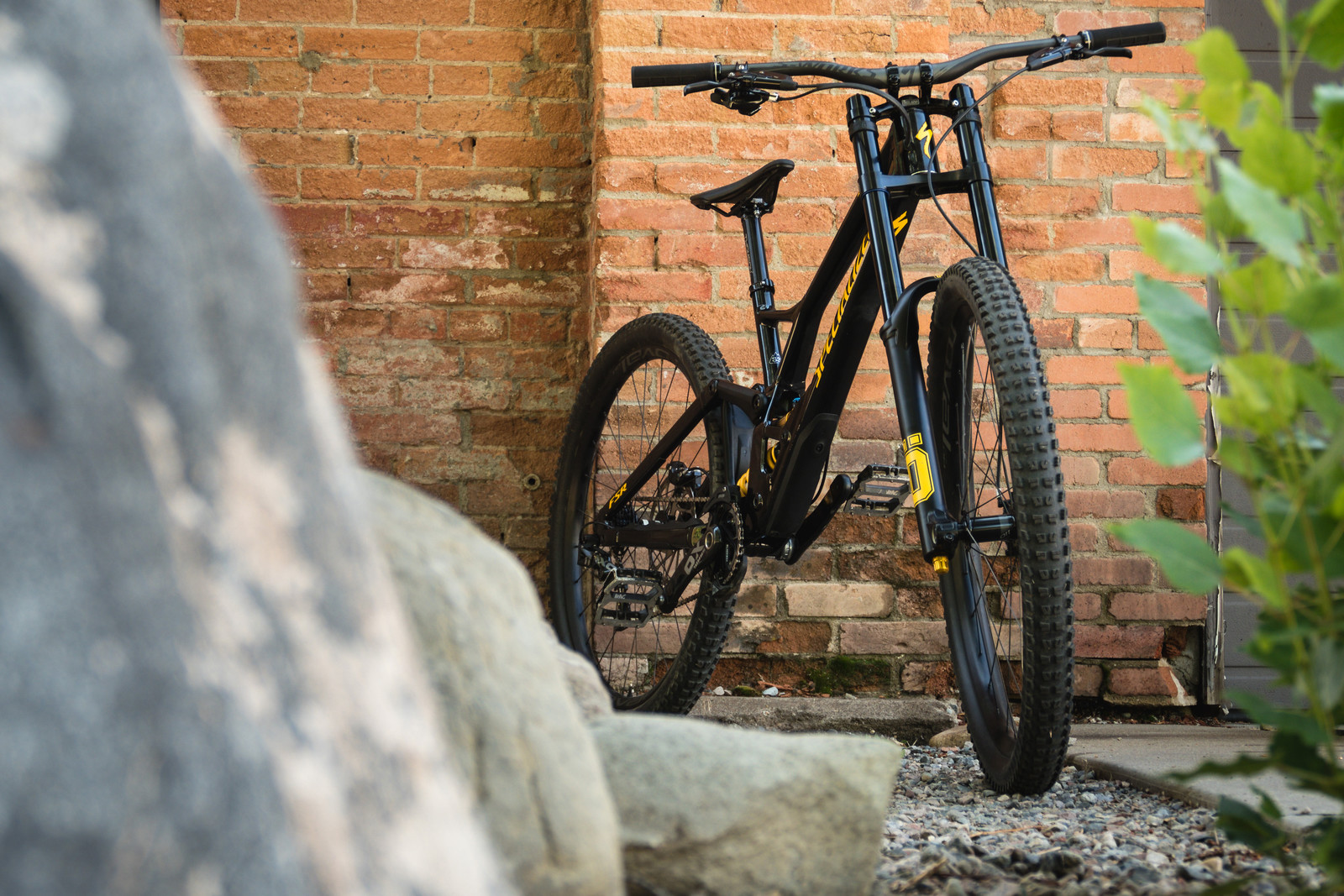 The story behind this bike is as compelling as it is to ride. Components and suspension included, the Demo 29 is a race-ready machine that will allow the masses from beginner to World Cup level to excel and succeed. The team at Specialized have poured everything into this new concept, attempting to do right by all of their previous bike’s shortcomings and learning in the process. As a racer myself, I would have no hesitation hopping in-between the tape aboard the Demo 29 knowing the only thing holding me back is my own riding skill and ability. 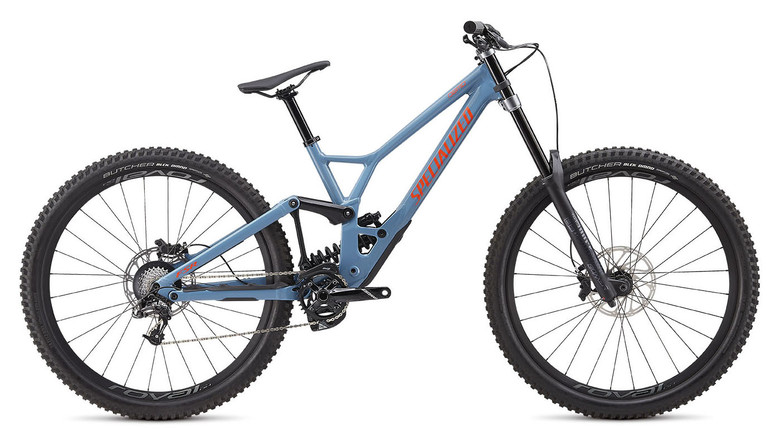 Head over to www.specialized.com for more Demo 29 details.

Brian is kind of like Uncle Rico – even though he has a titanium rod in his tibia and is continuously trying to avoid obtaining a dad bod, he delusionally daydreams of World Cup racing glory. That thought process transfers to the trail. Whether building trail, coaching on them, or just trying to recapture the glory days between the tape, he’s always in search of the racer line. Known for "Buelling" his bikes, Brian sometimes puts a serious hurt on parts pushing them to their limits. Although the Collegiate National Championship sweater vest jersey is collecting dust somewhere, whenever it’s time to race against the clock or perform for the camera you can bet he’s fully pinned and putting it all on the line for you!

Post a reply to: A DH Racer’s Perspective: Unveiling the 2020 Specialized Demo 29 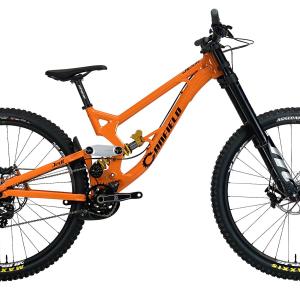 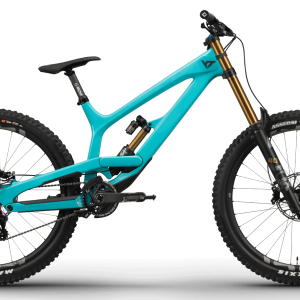 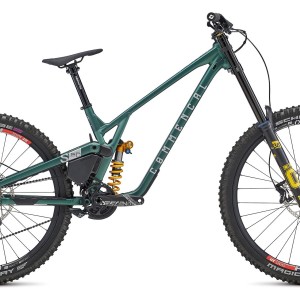 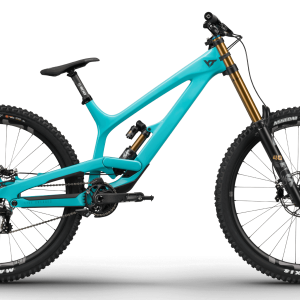 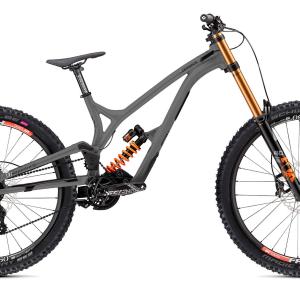 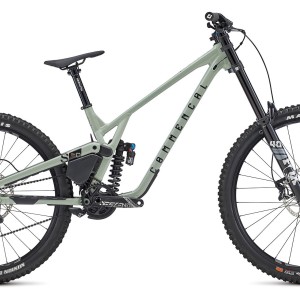 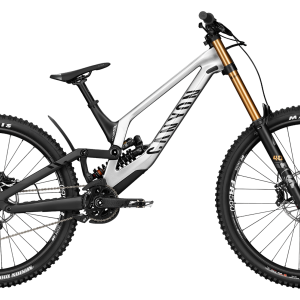 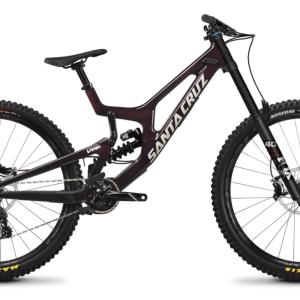