View as: Slideshow | One Page

Carbon Enduro Gearbox Bike - The Zerode Taniwha
By sspomer
Share:
The new Zerode Taniwha in all its native NZ glory. This is one of two bikes fresh off the production mold ready for testing.
5
0
Rob Metz, Zerode's founder, with his new baby.
5
0
No more high pivot idler as seen on some prototypes and on the DH bike.
5
0
A Pinion gearbox makes the bike go, and the linkage-driven single pivot is built around it.
5
0
She looks fun to ride to us!
5
0
A beautiful rear wheel. Rear wheels can be built dishless since there is no cassette or freehub to worry about. This means the wheel is stronger and ready for smashing.
5
0
The Zerode DH and the new first production Taniwha built up.
5
0
The carbon frame and refined gearbox put the Taniwha in a competitive weight class.
5
0
65-degree head angle, 160mm of travel. Reach for the large is 445mm and the medium is 420mm. An XL frame is coming soon, too.
5
0
Shifting is done via a grip-mounted twist shifter.
5
0
It goes to 11. In fact it even goes to 12, a number soon to be popular with more than just the Pinion gearbox.
10
8
Made to pedal.
5
0
Carbon details.
10
3
Clean down low.
10
3
The bike that started it all.
10
3
Mike Metz (Rob's brother) and co-owner of Rotorua's world-famous Bike Culture bike shop will be riding and testing this other prototype.
10
8
Can you wait 3 more months? We can...barely.
5
0
Metz rides an XL but this is a medium, so don't worry about the off-sized pairing. Mediums and larges will be the first to start shipping!
5
0
Intro Graphic 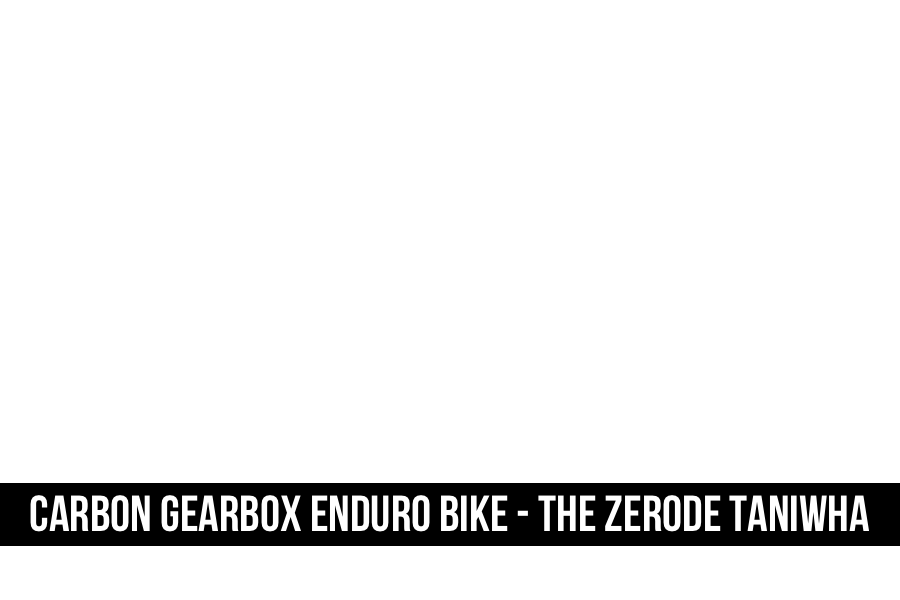 Zerode's Rob Metz shows off the first production samples of his new carbon gearbox trail/enduro bike called the Taniwha. The Taniwha features a Pinion gearbox and more traditional "faux bar" suspension design. The bike has a 65-degree head angle, gets about 160mm of travel with reach for the large at 445mm and the medium at 420mm. He's hoping the bikes will be available for purchase in about three months, starting with medium and large sizes and an XL coming in the near future.​ We like it!

Photos and story by Sven Martin

See the high-pivot carbon prototype from 2014.