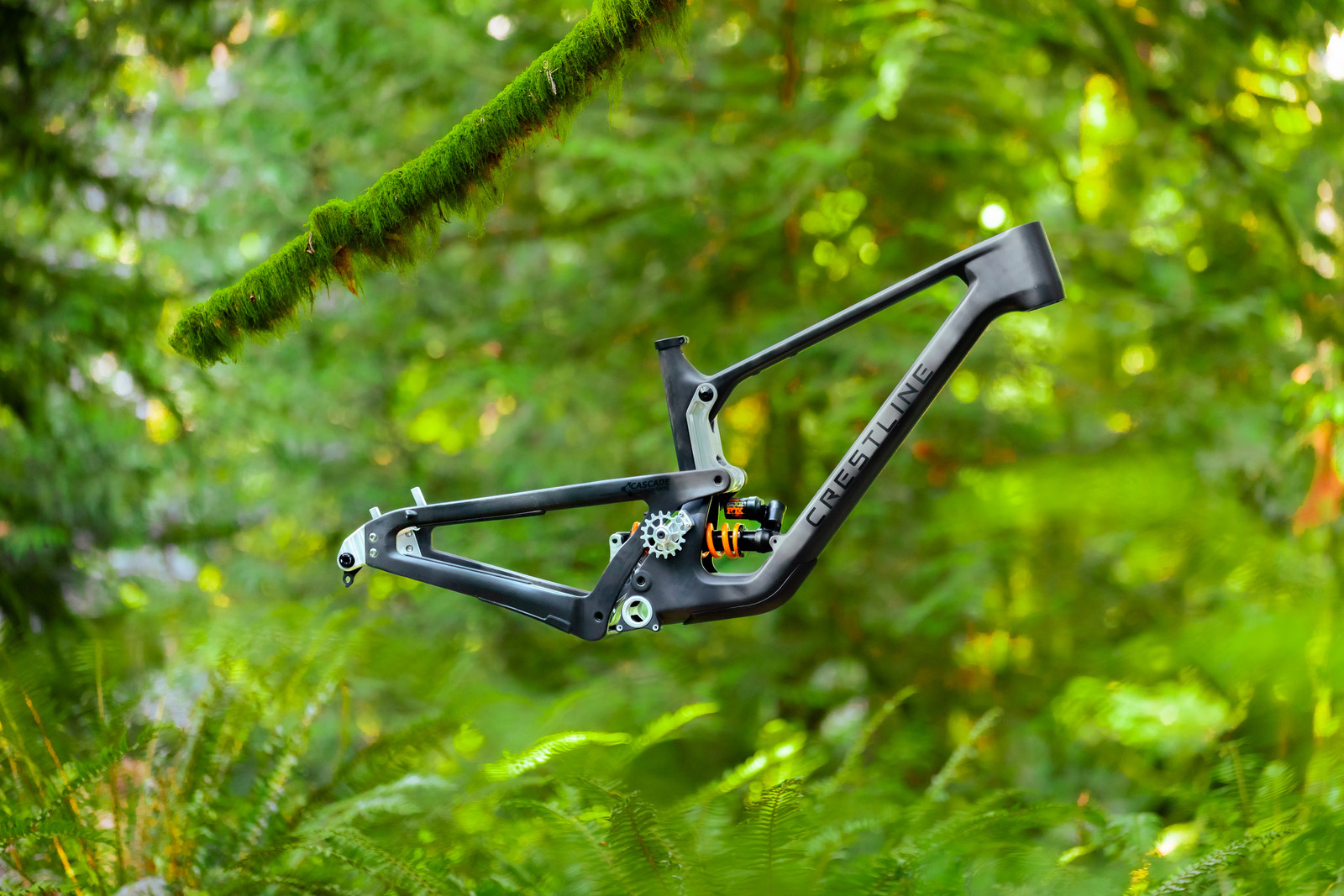 Today, Crestline Bike Company, in conjunction with Cascade Components, have burst onto the scene with their first bike, the RS 205 VHP. First and foremost a race-focused downhill bike featuring a virtual mid-high-pivot suspension design, the RS 205 is a fascinating beast due to its modular customization and limited availability. 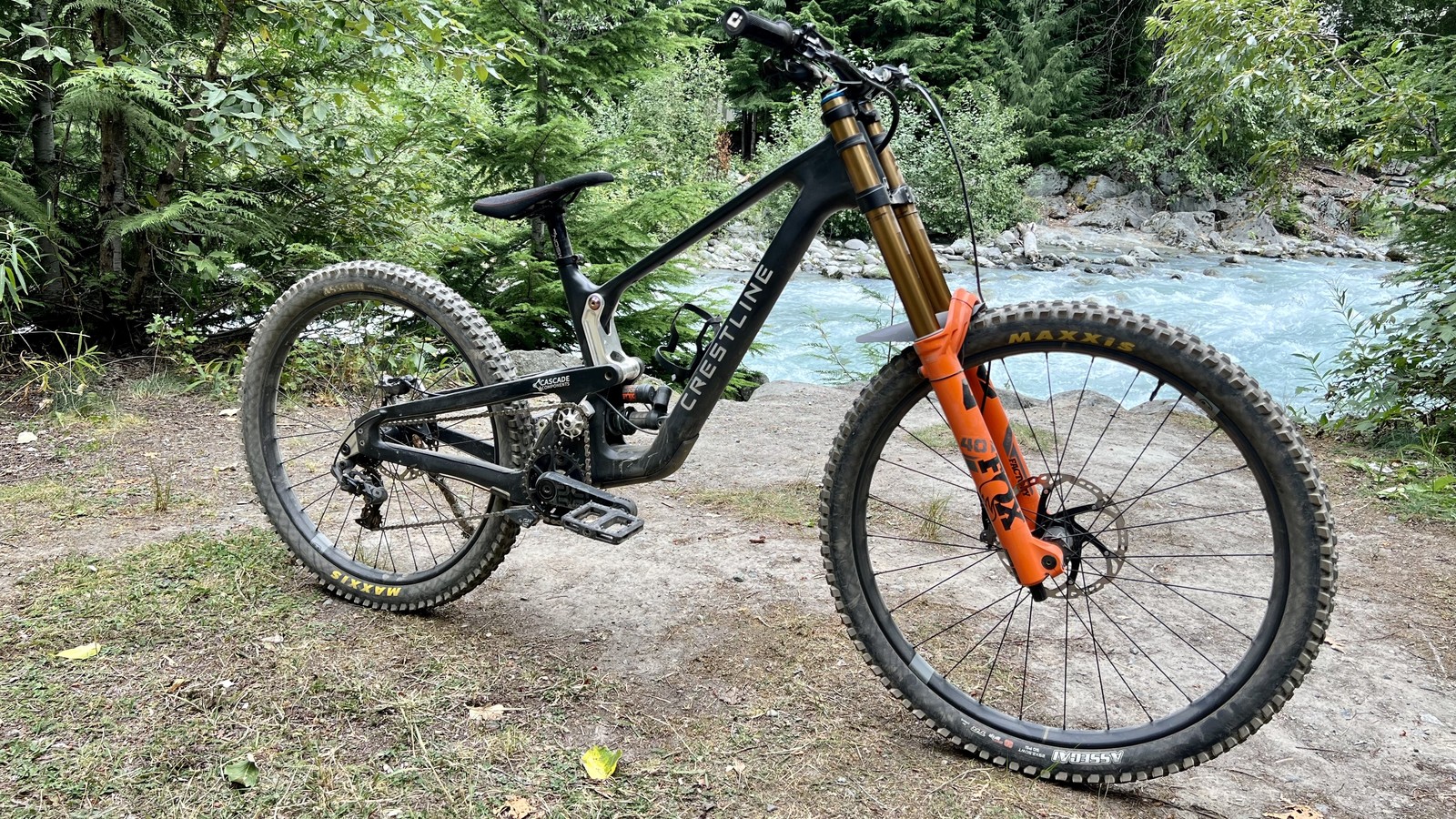 The idea for the RS 205 VHP spawned from Cascade Components' involvement with Neko Mulally's Frameworks project. After helping Neko with links for his self-designed World Cup race bikes, Cascade and Crestline began exploring the idea of making a downhill race bike of their own. 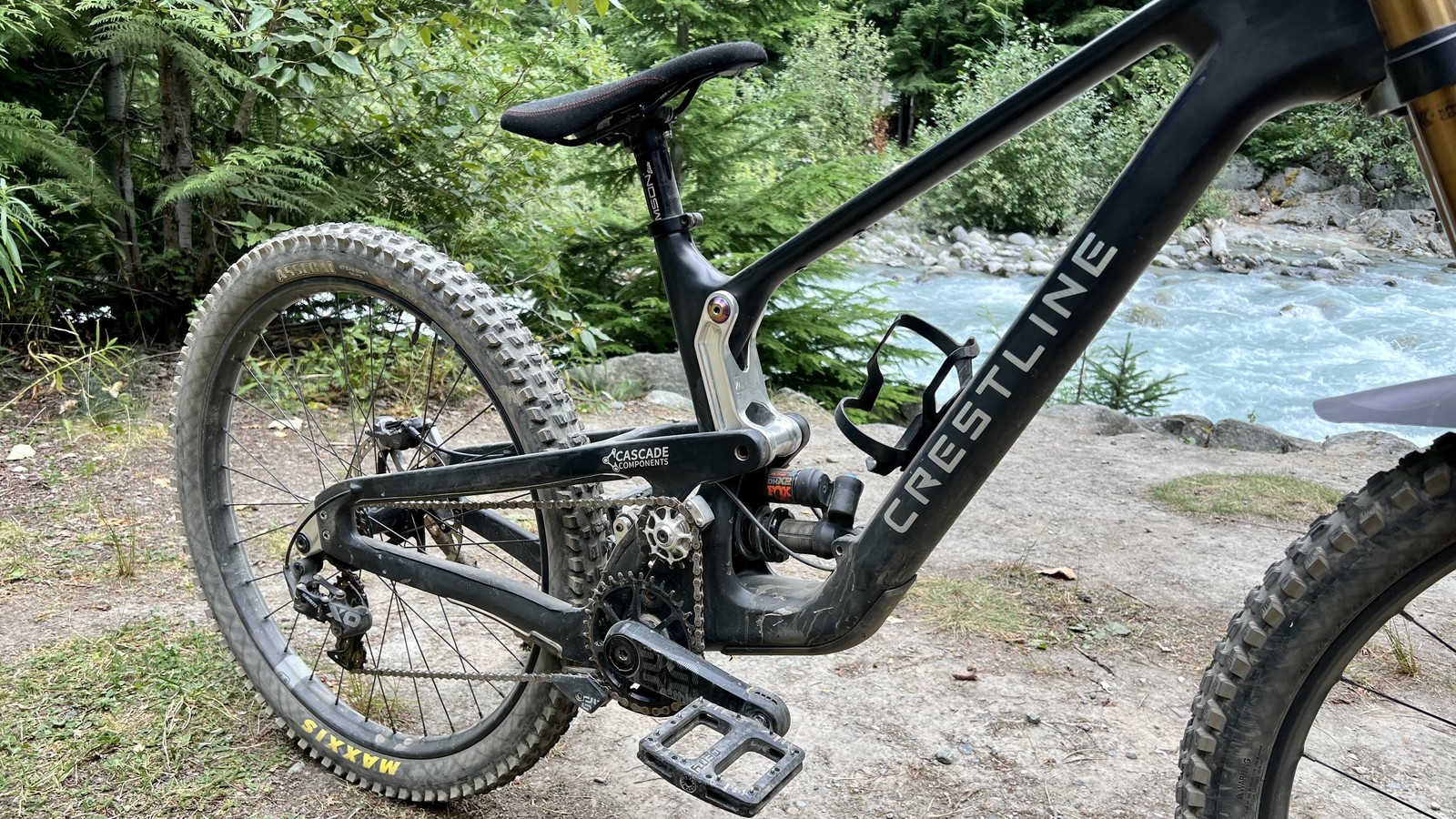 At a glance, the RS 205 VHP suspension layout looks very familiar, utilizing two short links that rotate in opposite directions and connect the front and rear triangles of the frame. The benefit of such a design is the ability to manipulate suspension kinematics at different points in the travel. What separates the RS 205 VHP from other bikes with a similar suspension layout is the position and movement of its virtual pivot point or instant center. As the suspension moves through its travel, the virtual pivot point begins high and gradually moves lower and forward. This design characteristic is what Crestline and Cascade feel makes the RS 205 VHP unique and different from other high pivot or mid-high pivot bikes with fixed or dual link designs.

Why did Crestline & Cascade choose a virtual pivot point suspension design? What performance qualities were appealing about such a design, and how does the VHP layout differ from similar designs?

The beauty of our VHP suspension layout is that it's highly tunable. Small dimensional changes have a big impact on kinematics, so there's a wide range of tuning options within the space constraints of the frame. If you look at the Cascade link for Transitions' V1 Sentinel, it's way bigger than the stock link, which was necessary to get the leverage curve we were going for. However, if you take any of Cascade's Santa Cruz links and put them alongside the link they replace, the size is relatively similar. The VHP design is more or less ten times as sensitive to dimensional changes and, thus, is very tunable. The RS 205 VHP differs from other designs because it's a mid-high pivot with an idler tuned for minimal pedal kick with a very specific axle path. We've also included an option to move the idler down, creating a better pedaling platform if desired for a specific track or setup. Jimmy Davis, Cascade Components 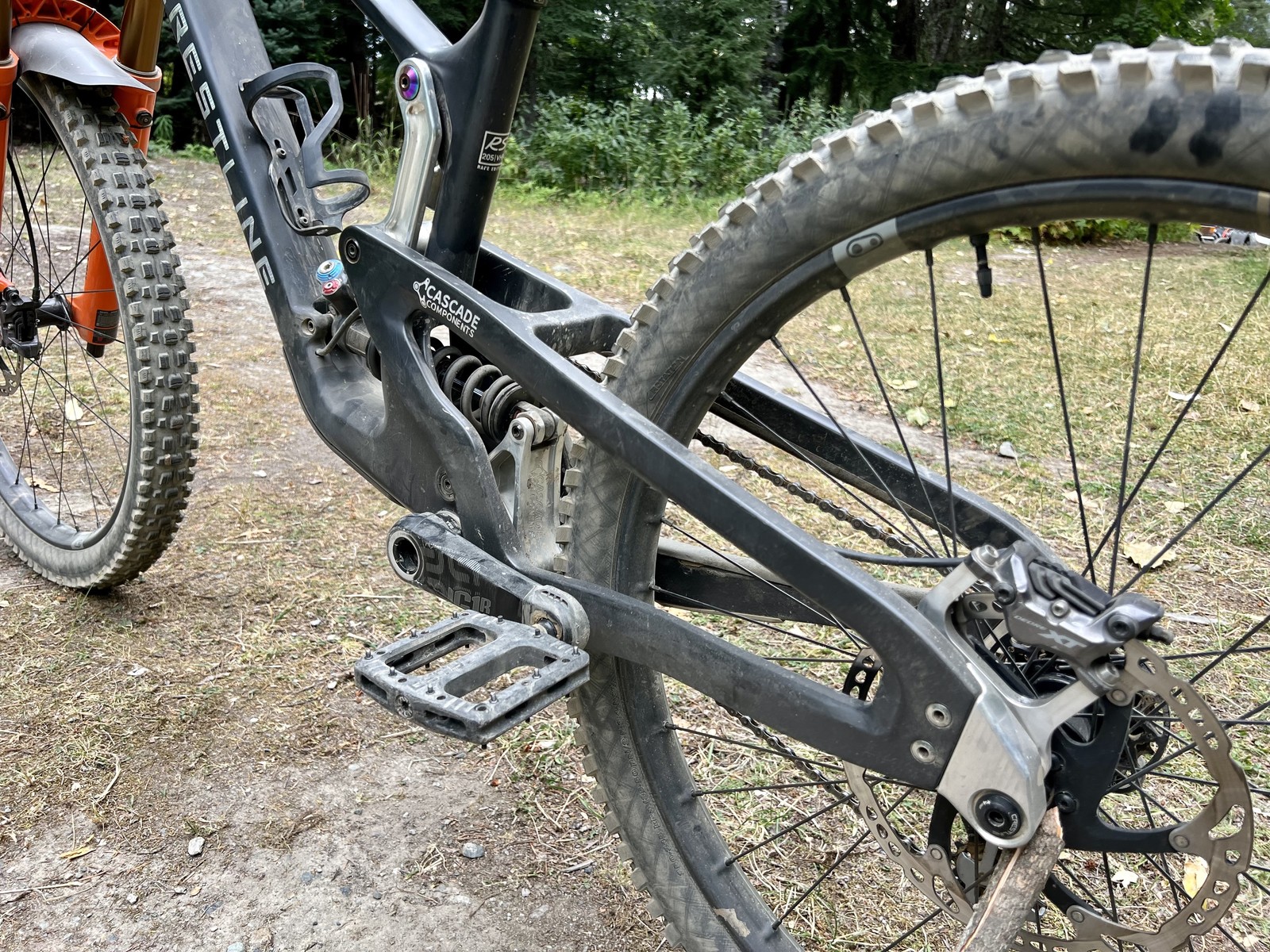 Can you elaborate on the performance benefits of having a virtual high pivot that moves lower and forward as the bike cycles through its travel?

I'll preface this with a little about anti-rise and different frames because anti-rise is the main thing at play here. There is no holy grail for anti-rise numbers. It is very dependent upon the progressivity of a given design. The more progressive a bike is, the more desirable higher anti-rise at the top of travel becomes. This is because the bike is supportive and already wants to stay up in its travel. Coupling that with low anti-rise, the rear suspension is prone to topping out under heavy braking. This is quite noticeable when you are hard on the brakes, and the dynamic geometry is very steep, as well as when you are trying to creep into a slow shoot, and the bike pitches forwards more than you'd like as you feather the brakes. With less progressive suspension, low anti-rise helps keep it from packing up, and those things that are an issue with more supportive suspension aren't a problem because it doesn't have the same inclination to stay up in its travel.

As the instant center moves throughout travel, anti-rise drops off. With a mid-high instant center at the top of travel, anti-rise is initially higher, similar to other high pivot bikes. This is important given that the suspension design of this bike is fairly supportive. As the instant center moves down and forward, anti-rise drops. The rate at which it decreases is especially quick towards the bottom of travel. The end result is a bike that is inclined to stay in the mid-travel range when on the brakes, minimizing chassis movement in these scenarios, which makes for a more predictable ride. Jimmy Davis, Cascade Components 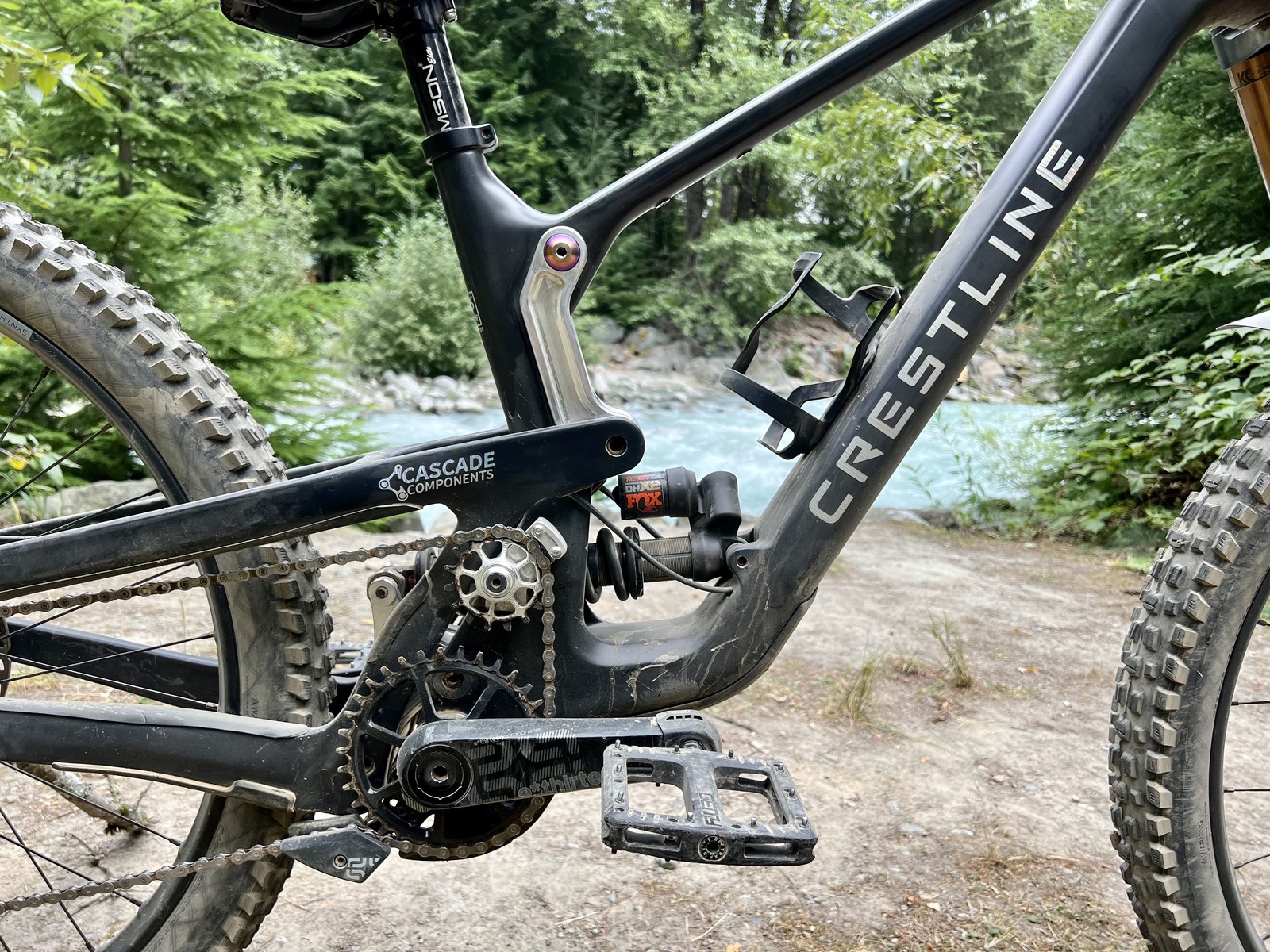 Crestline made it clear that they were very excited to partner with Cascade Components because designing a bike around a highly sensitive and tunable suspension layout does not leave much leeway to get things wrong. It was essential to understand and execute the kinematics precisely, and Cascade Components has proved time and time again with their aftermarket links that they were the perfect partner for the job.

Why the RS letters in the model name?

These two iconic letters are synonymous with racing and stand for "Rally Sport." However, when Porsche and Audi use the insignia, they are an acronym for "Rennsport" which translated from German means "Racing Sport." Today, auto manufacturers continue to adorn only their highest-performing machines' with the "RS" emblem. From Porsche, Ford, Audi, Chevy, Renault, Skoda plus more, if you look closely, you'll find RS models. Long story short, we love the racing heritage behind these two letters and what they mean and feel that they capture the essence of our bikes when used in the original form. It will always mean "Rally Sport," and we are proud to put another RS badge out into the world to honor the racing heritage it represents.

One frame size might sound limiting; however, Crestline is essentially offering riders the possibility to purchase one frame and with two sets of links and dropouts, end up with a 180mm travel, 27.5-inch, single crown freeride bike, and a 205mm travel, 29-inch downhill race bike. We often hear the phrase 'two bikes in one' when frames feature a two-position geometry adjustment, but Crestline and Cascade are offering riders a level of customization usually saved for elite riders on factory teams. 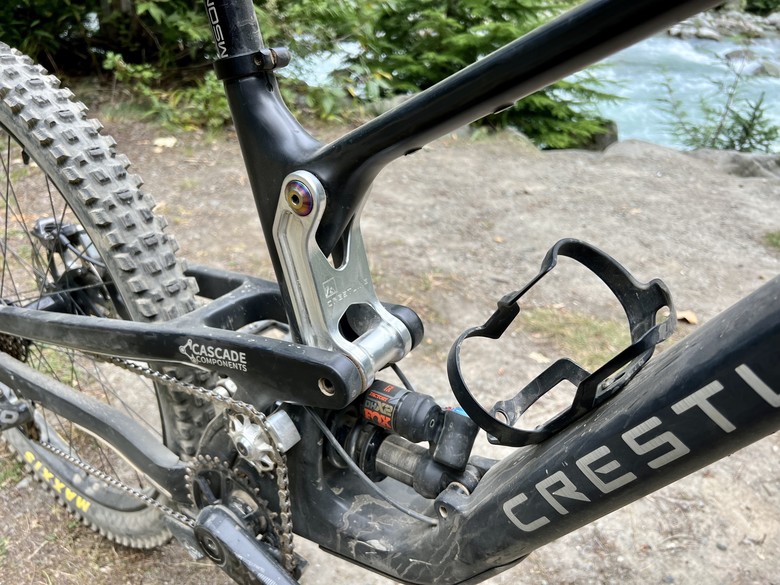 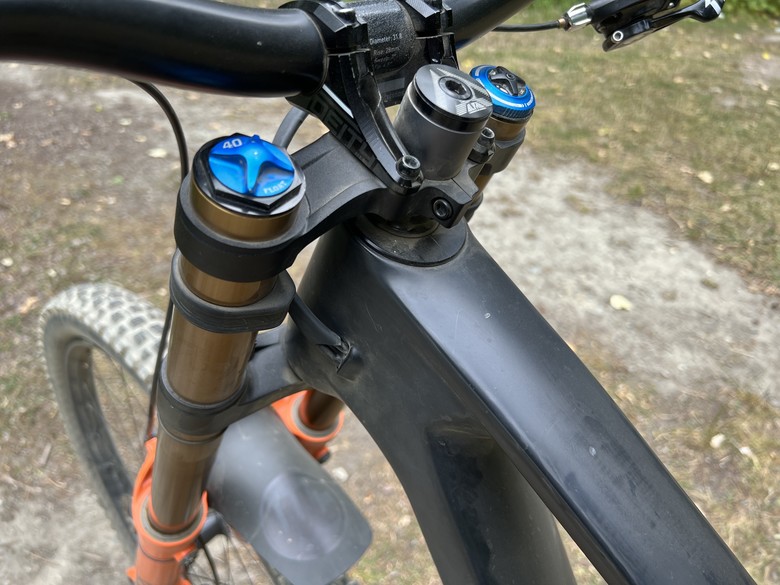 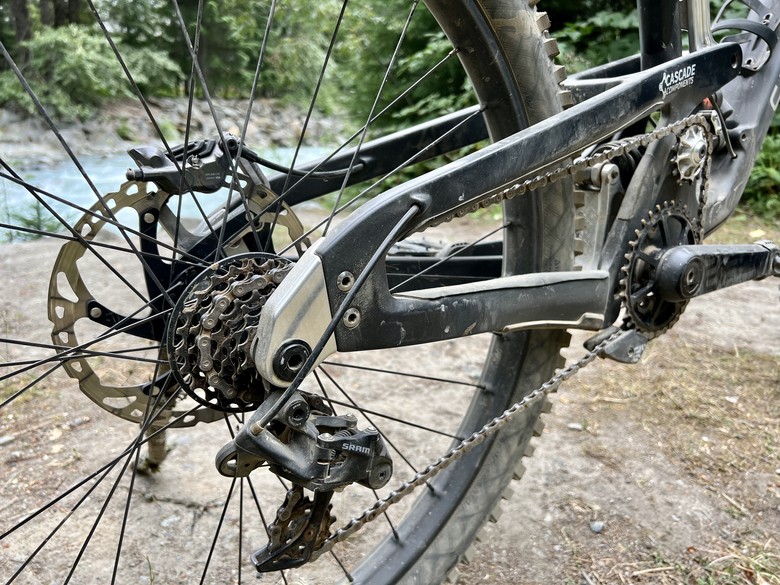 The frame also features a tool and water bottle mount, and the position of the idler pulley can be changed to optimize pedaling performance.

Well, technically, it was three laps. During the craziness of Crankworx Whistler, we had the opportunity to link up with Troydon from Crestline to ride the RS 205 VHP and gather some initial impressions of the bike. Unfortunately, our plans to document riding the next day fell through, so we are left with only these words.

Right off the bat, the RS 205 VHP felt noticeably light for a downhill bike. We don't know its exact weight, but with typical downhill-grade parts strapped to the frame, there was no component cheating or gimmicks at play. The finish quality of the frame was smooth and attractive, and we loved how the raw aluminum links contrasted with the raw carbon. Pedaling around the village, the familiarity of the frame layout and the mystic of the idler pulley and unknown frame logo garnered plenty of attention.

Two characteristics stood out during our short time on the RS 205 VHP. First, the geometry matched our height of 6 feet (182cm) perfectly, and as the bike moved through its travel, the dynamic geometry remained consistent, providing a predictable ride across various trail features. We found ourselves riding comfortably neutral over the RS 205 VHP, which made it easy to shift our weight forward or back when needed. We also found that precisely leaning the bike over in corners was mindless. On our first lap, we were blasting through bike park berms faster than we had all week. At the same time, on tight technical trails with awkward turns, the bike had no problem changing direction and maintaining traction. Thanks in part to the shorter rear center and 27.5-inch rear wheel. On our last run, we rode lower A Line and had no problem feeling confident enough to hit every jump. The bike didn't respond unpredictably off lips and was easy to maneuver in the air.

The second most noteworthy characteristic of the RS 205 VHP was how supportive, and efficient the rear suspension remained to both ride input and medium-sized compressions. On lower-angle trails that required lots of pumping and body English to generate speed out of trail features, the bike hauled ass and did not feel like a sluggish downhill bike in the slightest. On rough downhill trails, such as In Deep, the RS 205 VHP managed big hits with ease and tracked the ground over braking chatter super well. Overall, the bike was eager to get up to speed and keep moving forward. If we were to spend more time on the bike, we would play around with less air pressure and more sag because we were not cycling through the travel as often as we probably should have. The downsides to only getting an hour to test ride a bike. 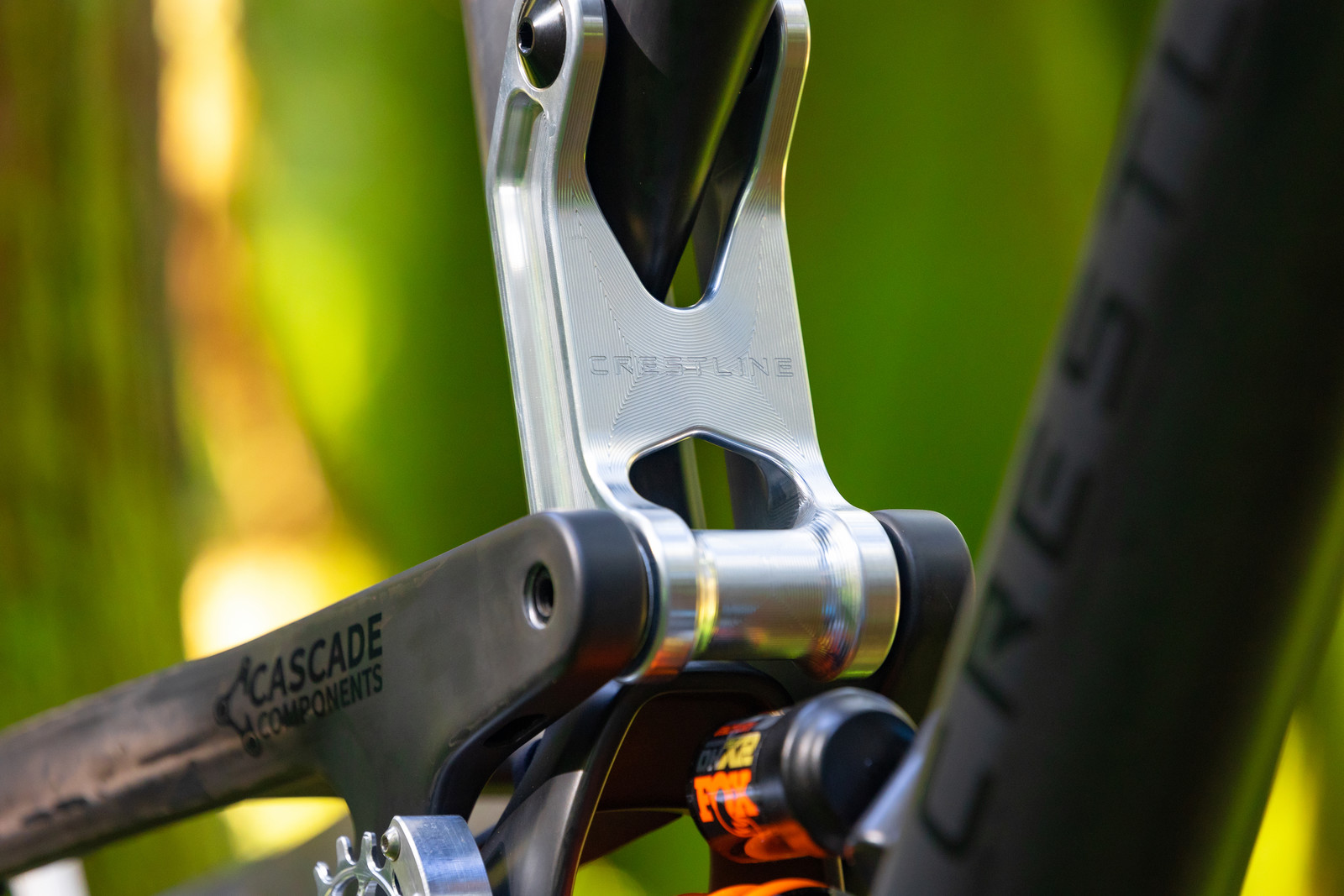 The last highlight of the RS 205 VHP that really stood out was the ability to swap links, dropouts, or the headset to end up with various bike setups. On our last chairlift ride, Troydon was breaking down how riders will be able to contact Cascade Components and request exact dropout lengths or links that provide a different leverage curve. If a rider has a setup they are chasing, Cascade will do what they can to provide those exact kinematics. That level of customization is rare, and for riders who are in tune with their needs, the options to finetune setup are endless. We would love to set up the RS 205 VHP with less rear wheel travel, a single crown fork, and a 29-inch rear wheel and see how it would perform as an enduro bike. Maybe that review will end up in our pipeline for a future review…

Frames are being produced in small batches and will ship out in the coming weeks. Only 50 frames are available, so don't hesitate if you are interested in owning this unique machine!