NUTRITION HAS EVOLVED
April 1, 2014 - News has leaked from the offices of Cane Creek Cycling Components that they will push into the sports nutrition market. Cane Creek is known best for its standard-setting innovations like the threadless headset and Double Barrel family of shocks, and they are now ready to change the way cyclists feel about and interact with sports nutrition. Like other rule-breaking innovations, this change will likely meet with some resistance at first and many will be uncomfortable with it during the early stages of market penetration.

When probed about the new product, Holly Colson, Director of Marketing at Cane Creek stated, “We simply recognized a hole in the market and wanted to fill it. It may seem like a stretch for a components company to enter an entirely new product area, such as sports nutrition, but we are confident that SkinkSkat, the world’s first energy suppository, will be widely accepted.”

SkinkSkat, a family of energy suppositories, are designed to gradually transfer nutritional calories to the rider during the length of their ride. Revolutionary SkinkSkat is also customized based on cycling discipline and tailored to fit the specific metabolic demands of each.

Cane Creek R&D leader Josh Coaplen said SkinkSkat was conceived based on need, and somewhat on want. According to Coaplen, “Necessity is the mother of invention. In the case of SkinkSkat, the concept was birthed during a group ride. Because of my tri-athletic bike handling skills, I’m uncomfortable riding in groups. I needed a way to pack in a lot of energy quickly without requiring the use of my hands. I can pound a SkinkSkat before a long ride to satisfy my energy demands in a safe and non-intrusive way. I think many other cyclists feel the same way, but won’t admit it.”

“Simple carbs ingested through the stomach can fuel muscles fast, but depending on your metabolism and the duration of your ride, you may not want to rely on your mouth alone,” Dover said. “This new system allows your metabolism to draw energy from at least two separate sources.” The sports suppository is designed to transfer nutritional benefits to the rider faster than any other product. As an added bonus, SkinkSkat leaves the body faster than its competition as well.

Design Engineer and downhill racer Brandon Blakely said it can be difficult sometimes to get nutrients quickly enough, especially for racers who might struggle to choke down food in the nervous moments before an event.

“We all use supplements, and our products are sophisticated. It was time to put those two together,” Blakley said. “We heard some athletes were sucking down sardines and Spam. That is just gross”

According to Malcolm Hadley, long time advocate of taking people out of their comfort zones, “We have done extensive market testing at charity rides. Once they try it, people are really into it.”

SkinkSkat are available online (discreet packaging of course) or through your favorite local bike shop. 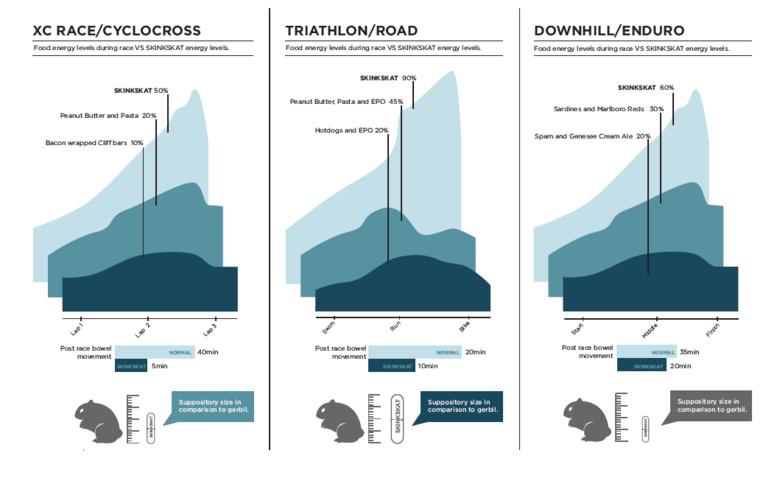