Big hucks and plenty of rocks make our last timed training of the 2019 World Cup DH season an entertainer as racers turn it up on track. Only .158 seconds separated Charlie Harrison and Danny Hart at the top of the list. 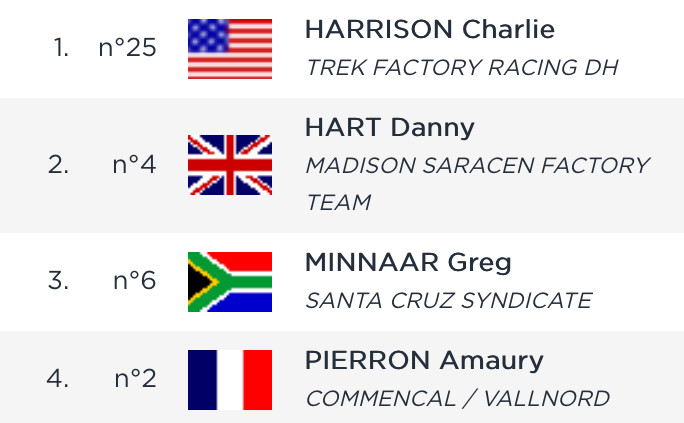 We'll start with some crappy news as timed training concludes from the UCI Mountain Bike World Cup Downhill in Snowshoe, West Virginia. #USDH destroyer, Neko Mulally, is out with a broken fibula (we originally reported tib/fib, but it is only his fibula) after a crash in practice today. We're gutted for Neko after a solid World Champs effort leading into Snowshoe. Heal up strong, Neko.

Weather was nice today as the fastest racers on the circuit had their timed training session, but rain fell the night prior, leaving the dirt moist and the roots slick on the new course. The new Snowshoe DH track features huge jumps (which Brendan Fairclough actually backflipped in practice), massive gaps (see Minnaar below) and plenty of rim-smashing rocks and roots.

Right off the bat, Danny Hart was the first racer down with a 3:22, showing he's ready for redemption after just missing a medal in Mont-Sainte-Anne last weekend. Dakotah Norton, who may be considered semi-local, answered back with a 3:21 just a few minutes later. Top riders started turning it up with Amaury coming in at a 3:20.7, and then Danny Hart reclaiming the fastest time with a 3:20.4. A lot of time went by without anyone coming close to the 3:20 mark until Charlie Harrison dropped a 3:18. Greg Minnaar had some smoking top splits and so did Danny Hart, but Charlie's time held by just .158 seconds with the Top 3 less than one second apart! #USDH in the house.

Tracey Hannah is making sure she's ready to seal the overall World Cup win deal by going 6.6 seconds faster than Sian A'hern in the Elite Women's class. The rest of the women's times fell off steeply throughout the results sheet. Kye A'Hern stays on the gas after a World Champs win in the Junior Men's class posting a 3:28 ahead of Thibaut Daprela's 3:31. Mille Johnset was the only Junior woman with a significant time, running 4:21.

Race day will be bonkers with a tight overall race between Loic Bruni (who says he doesn't want to know the math it would take for him to win or lose the title) and Amaury Pierron. Troy Brosnan is technically still in the hunt, but Amaury and Loic would have to have some pretty bad luck for Troy to nab it.

While timed training doesn't count towards overall points this weekend, neither does qualifying, as it's the last race of the season. All points are earned on race day, so timed training may be more important for working out kinks than on a typical World Cup weekend. 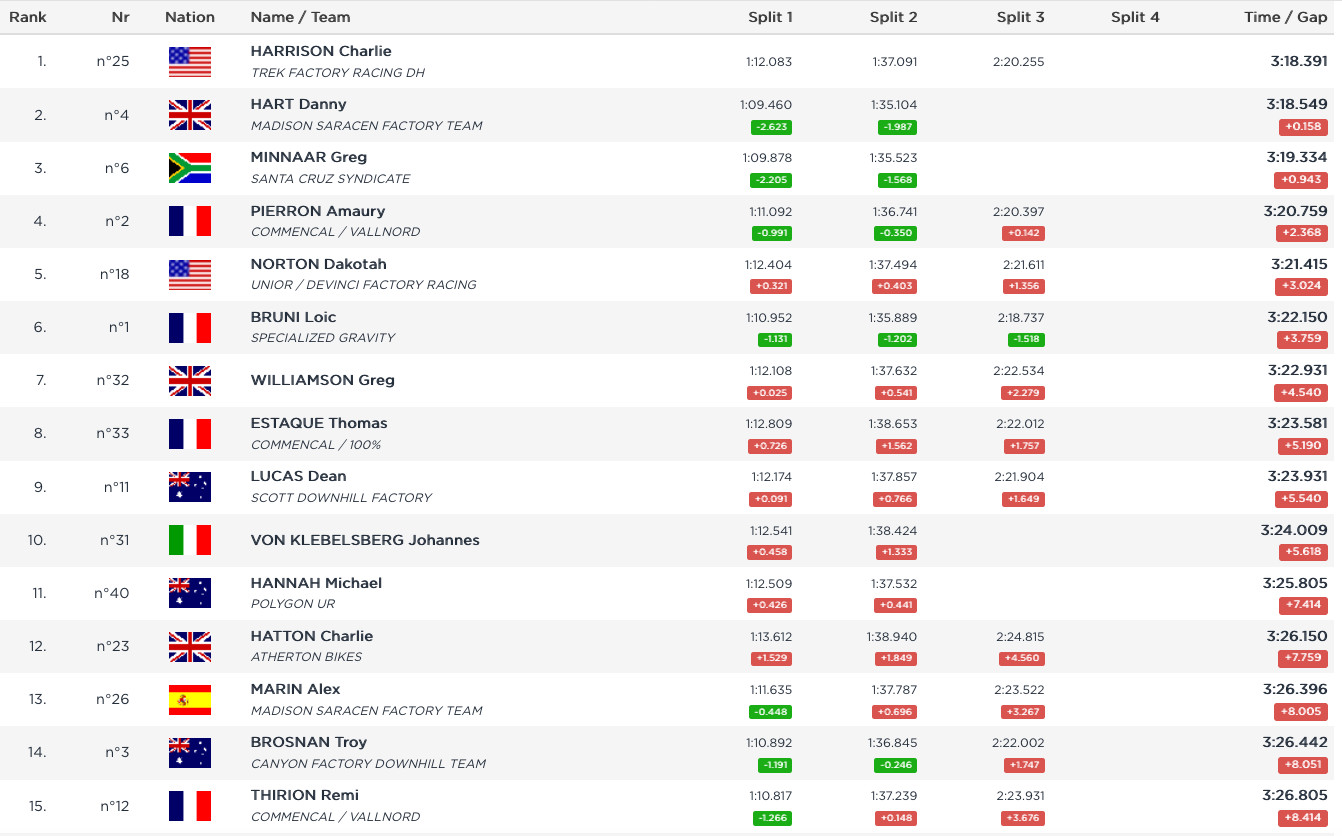 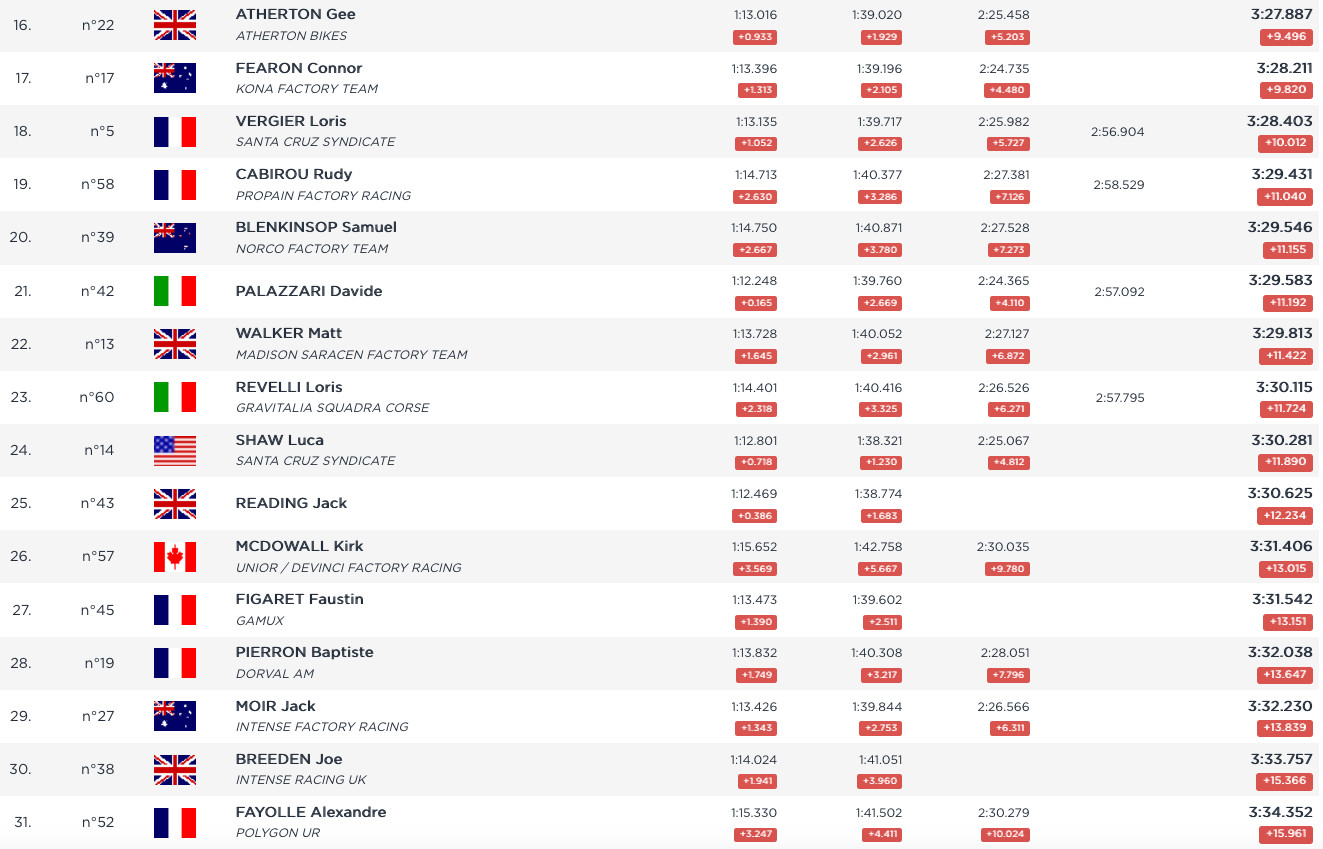 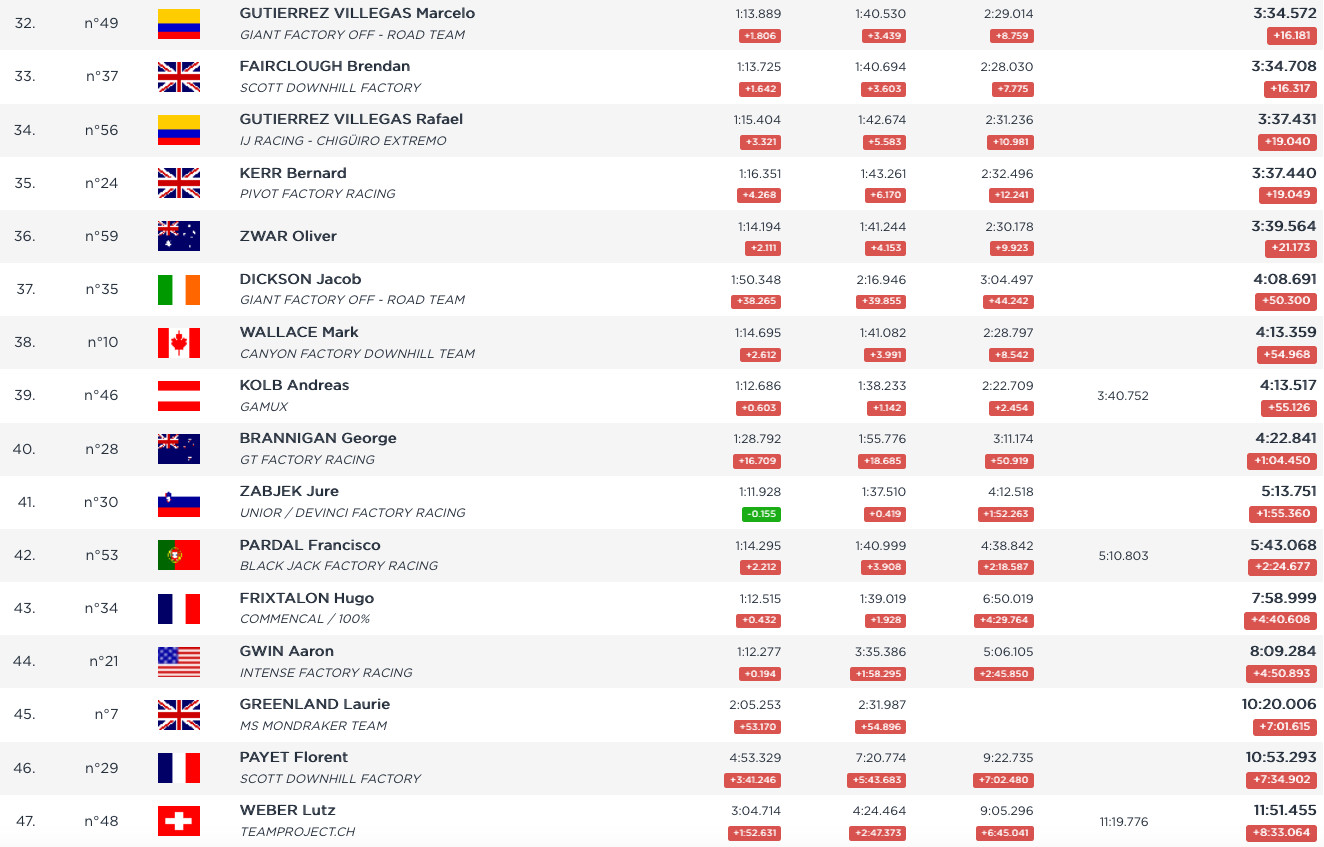