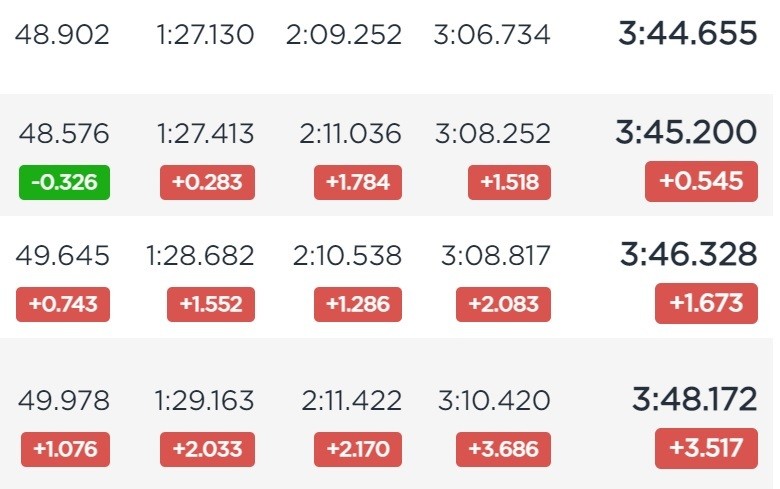 The first World Cup week of 2021 served up plenty of drama, with the weather once again wreaking havoc with the track and throwing a major spanner in the works during the first days of practice. For race day things were looking up, although the threat of afternoon thunderstorms was as always something that the riders and the mechanics had to take into account.

The junior men got things underway in the morning, with a considerably drier track the times were dropping fast. #USDH pinner and first place qualifier Christopher Grice couldn't hold it together on race day, leaving the door open for Pau Menoyo to take home the first ever World Cup win for the new Commencal 21 team, with a time that was 5 seconds faster than yesterday's fastest qualifying time. At this point, all fingers crossed for the rain to hold off as it looked like we might be in for something special!

The junior women were next on track, and Sophie Gutohrle made the host country proud by taking a resounding, 10-second win - getting ready to follow in Vali's footsteps perhaps?

Speaking of Vali, she qualified fastest here yesterday, continuing her streak of qualifying first AT EVERY WORLD CUP SHE HAS EVER ENTERED. That span covers two years of junior racing and now her first ever Elite World Cup. Incredible stuff. What would race day have in store for her? The track was still eminently capable of taking out a rider at a moment's notice, as Myriam Nicole and Marine Cabirou found out - both going down in the woods, Myriam having already crashed in the meadow section up top, pushing super hard and actually looking she might be able to pull back the time lost when the mud struck. Tahnee Seagrave rode the bucking bronco over the tricky drop in the woods, and she looked off after that - she'd still go on to finish in 5th and a podium spot for her return to racing is not too bad. Reigning World Champ Camille Balanche showed that she really has the tricky woods section dialed in, laying down a super clean run to take the lead with 4 riders to go. Soon, only Vali remained at the top...green at all the splits until she washed out her front wheel in the very last turn of the track, a relatively easy section. She climbed back on her bike and finished the race in second, still only 1.4 seconds back...a bittersweet result for sure, but the rest of the field has been put on notice.

Onto the elite men, with Laurie Greenland taken up residency in the hot seat early on. Amaury Pierron kicked him out with a fast and loose run taking 1.4 seconds off Laurie's time and letting us all know that the fast Frenchy is still just that...fast! A number of riders went by, unable to challenge Amaury's time, until the heavy hitters started to pop up in the start hut - none heavier that Loris Vergier! Sadly, he was taken out by a flat, a very deflating way to end the first race weekend of the season. Former team mate Luca Shaw set off next, in touch through the motorway but loosing a huge chunk of time through the woods, riding clean but too slow. Reigning World Cup champ Matt Walker made light work of the top section but a conservative middle section saw him drop a lot of time. Loic Bruni up next, and it was a similar story although Loic only dropped a couple of seconds to Amaury. Top-3 as he crossed the line. Aaron Gwin's challenge met with the same fate, and it was starting to look like Amaury might have done something special already. Definitely a positive return to racing after nearly two years off.

Benoit Coulanges rode a superb top section and carried a 1.1 second lead into the woods. Good pace but not quite enough to unseat Amaury, crossing the line in second, stoked with his effort. Reigning World Champ Reece Wilson kept his rainbow stripes clean and came within 0.4 seconds at the line. Minnaar up next, he attacked the track but his effort faded a bit, 6th at the line. Brook MacDonald charged hard, and we were stoked to see him on a flyer. He washed out in the last turn (twice actually), but the Bulldog was green at the top splits and that's all that matters at this point - amazing comeback story if ever there was one. Into the top-10 qualifiers and Angel Suarez made his new Commencal work for him at the top of track, holding a 1.1 second advantage into the woods, but went down trying a different line. Hatton, Ed Masters, Remit Thirion...good runs but not enough. Not many riders left up top, when Finn Iles set off to try and back up his excellent qualifying result. 1 second up after the motorway, but like so many before him, he would fade through the woods - 10th at the line. David Trummer and Dakotah Norton were unable to cash in on their qualifying performances as well.

Daprela! Up by THREE seconds before the motorway, absolutely incredible! Bogged down in a rut in the woods saw him almost throw it all away, but he managed to bounce back to steal the top spot away from team mate Amaury! Plenty of validation for the new Commencal proto at this point - would it be enough to take the elite men's win? Danny Hart pushed hard and was in touch the whole way, but dropped to 5th at the line. Troy on track - he won qualifying by 6 seconds but this was now a very different track. Almost 2 seconds back up top, but Daprela's wood section was not clean...0.7 up for the Australian after the woods, and 1.2 up at the line! Massive result, and Troy shows that he is ready to make the jump from Mr. Consistent to Mr. Winner on a more regular basis.

2nd Place, Thibaut Daprela - Interview (spoiler, that massive huck on the motorway was an accident LOL) 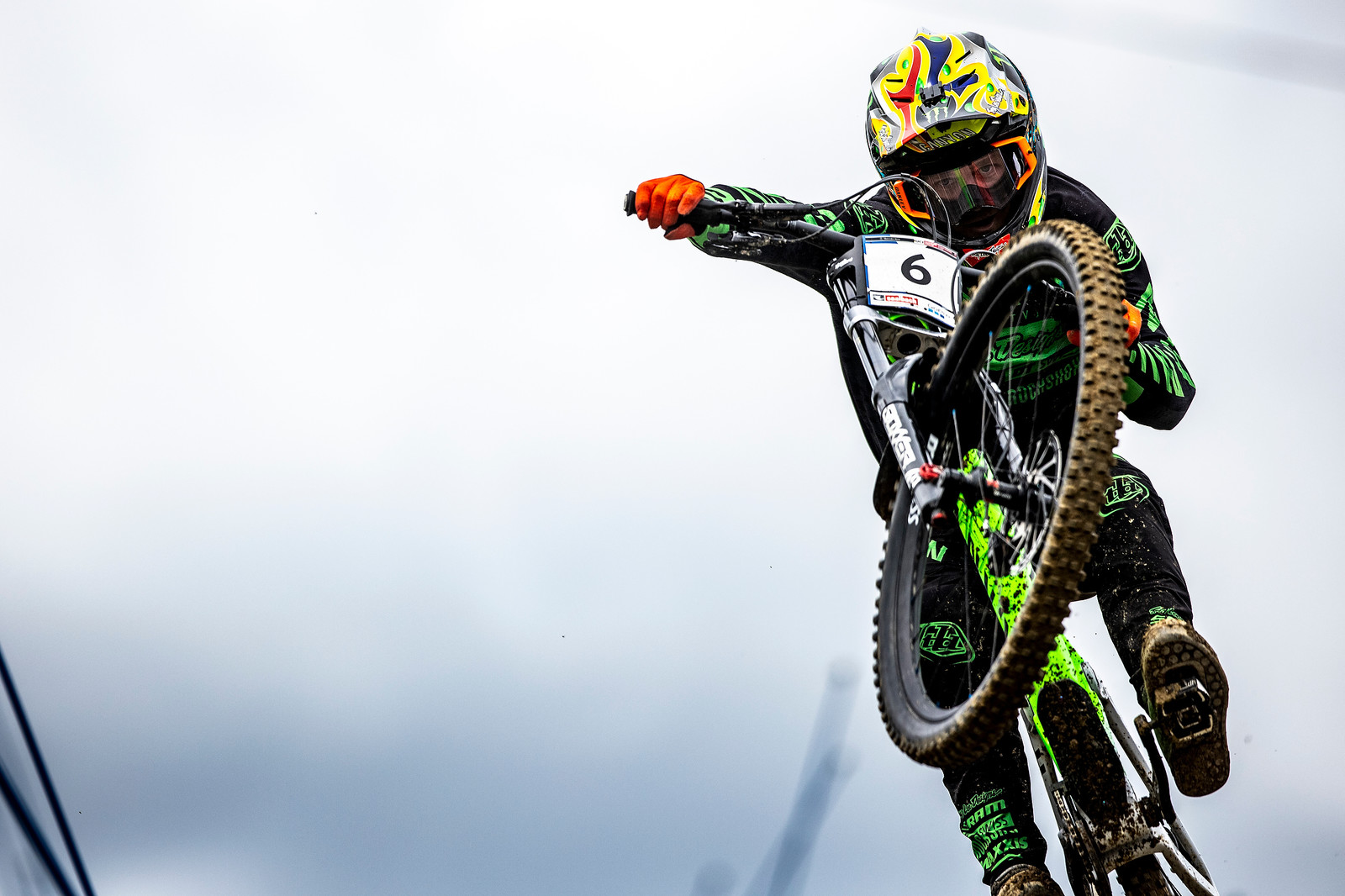 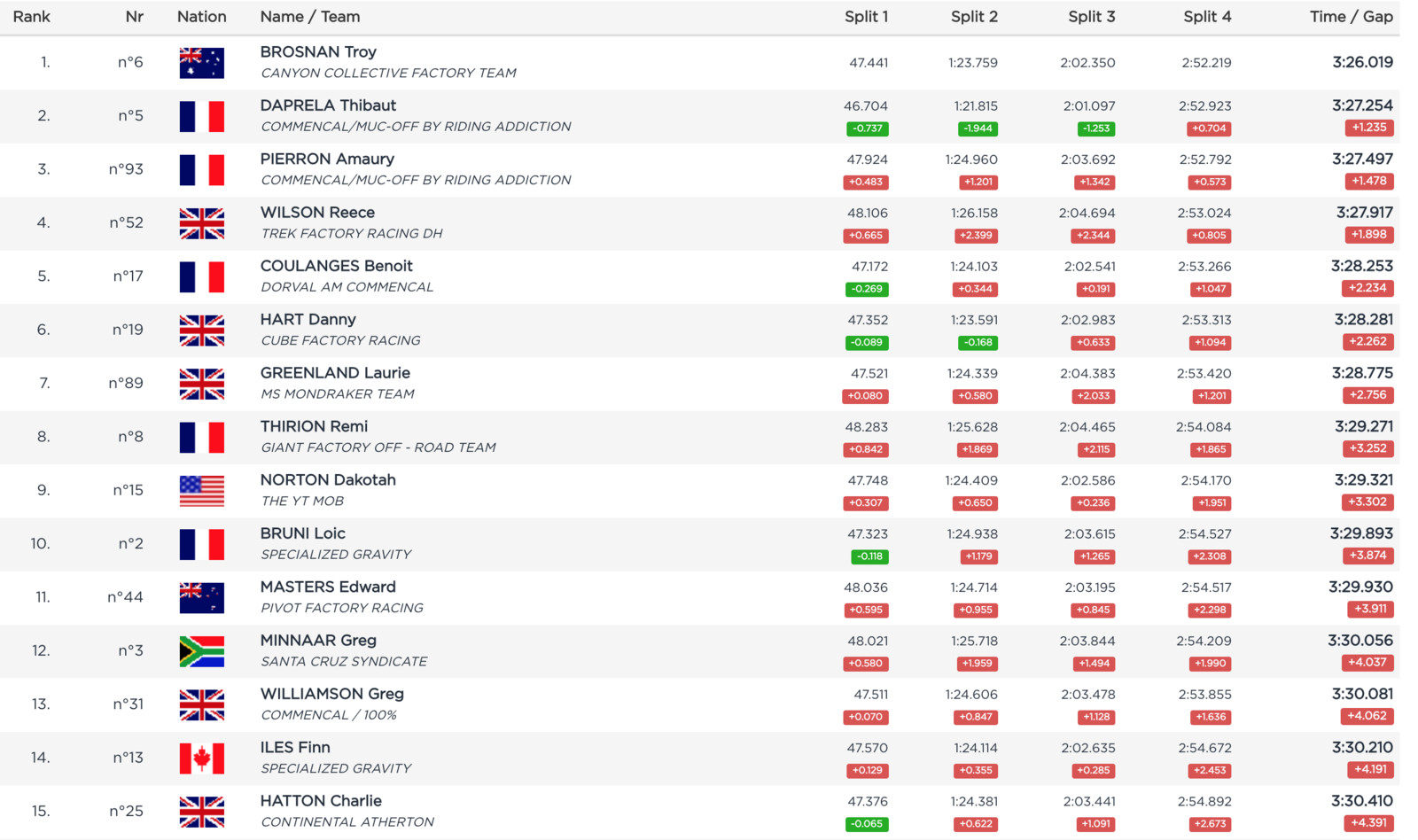 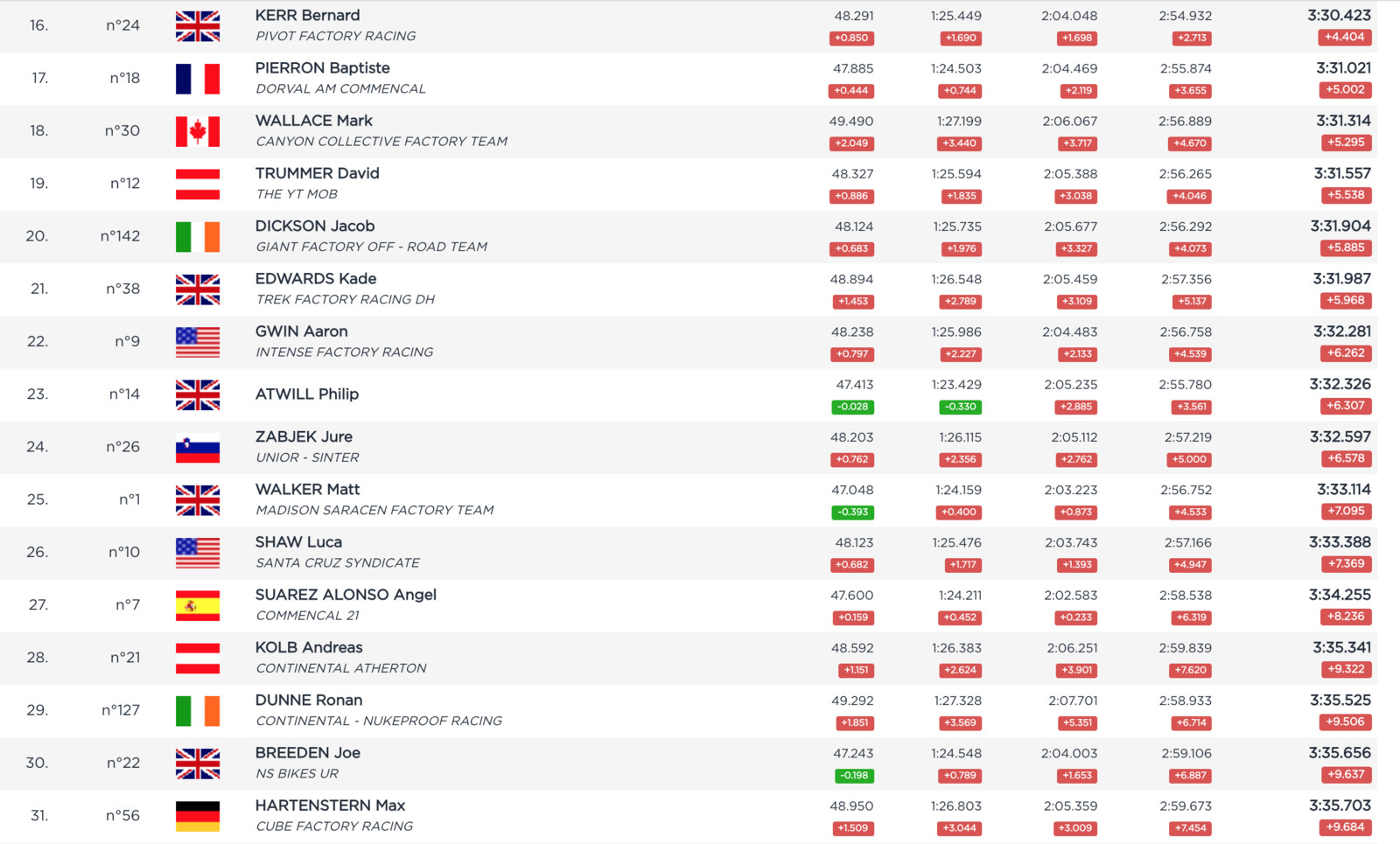 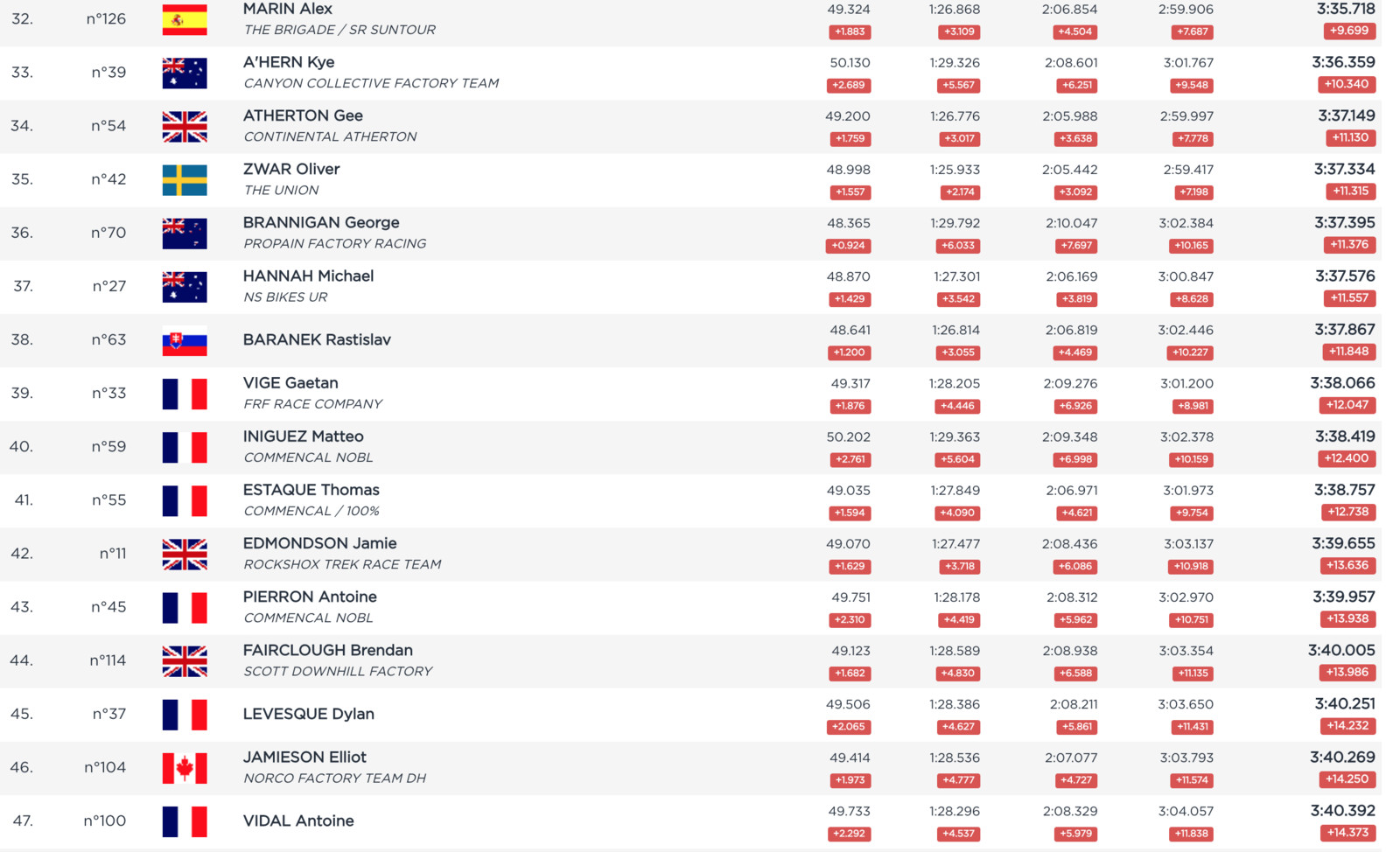 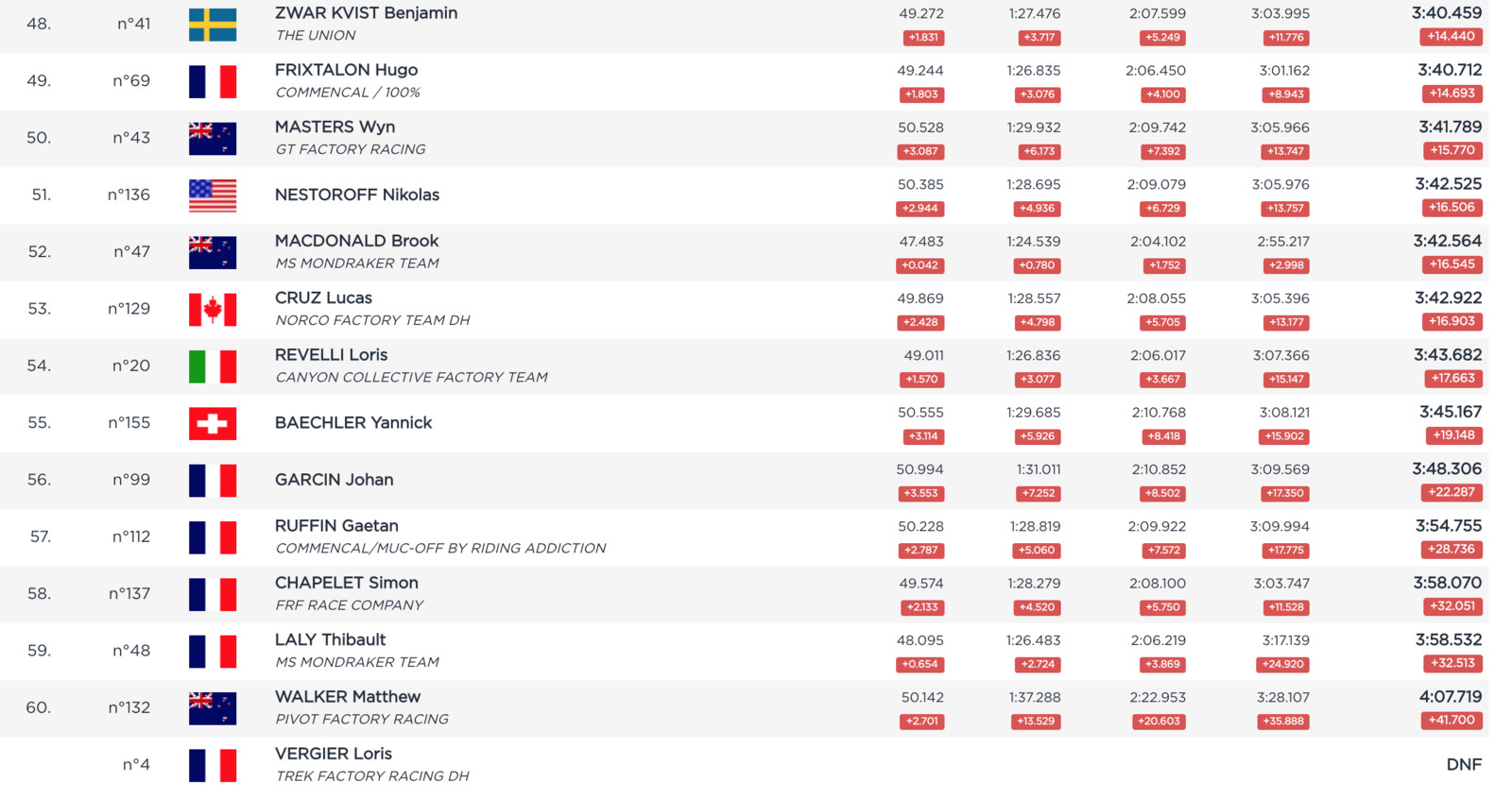 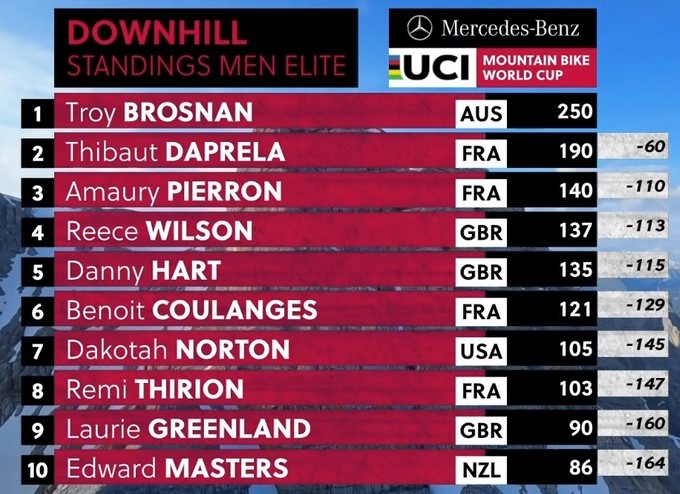 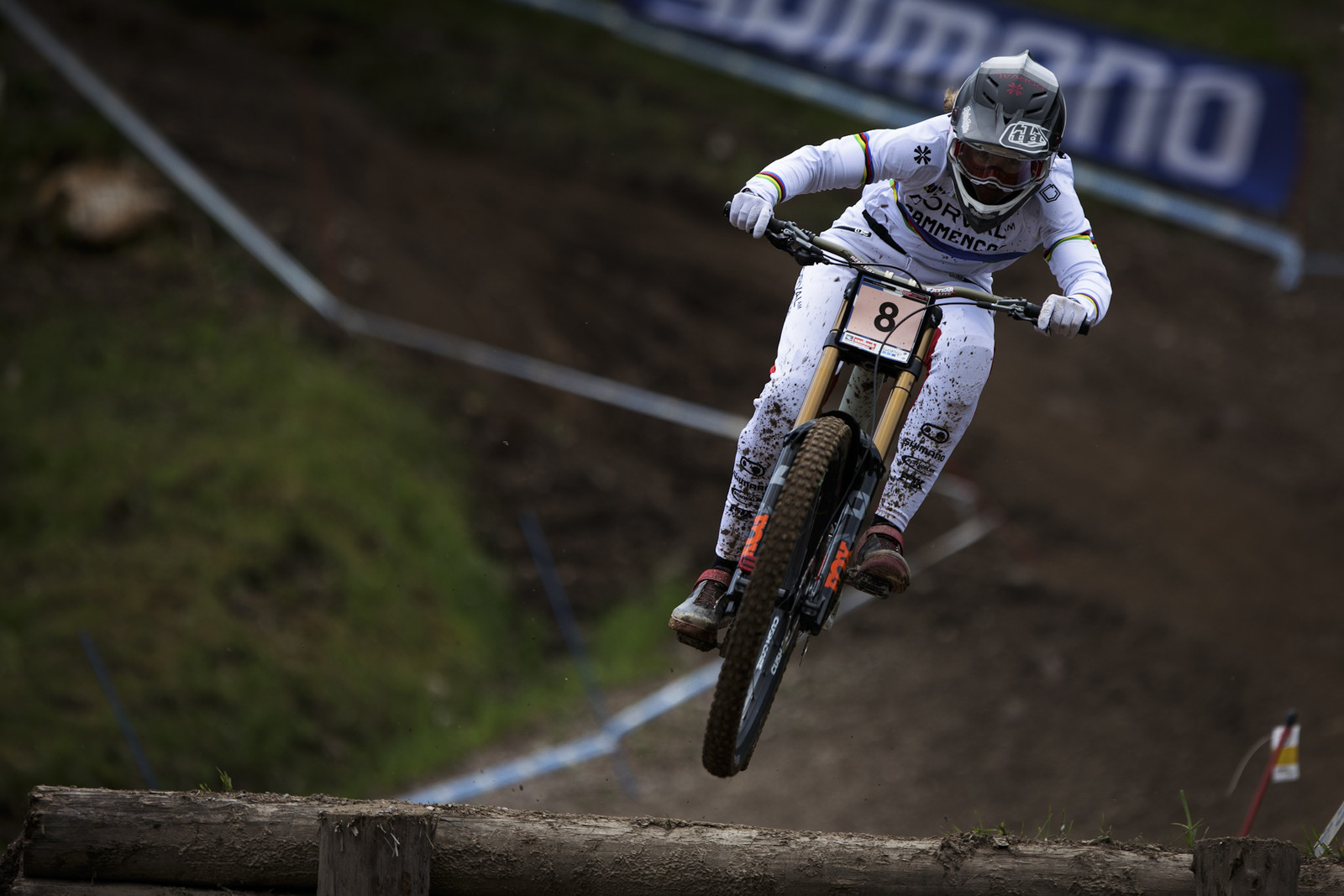 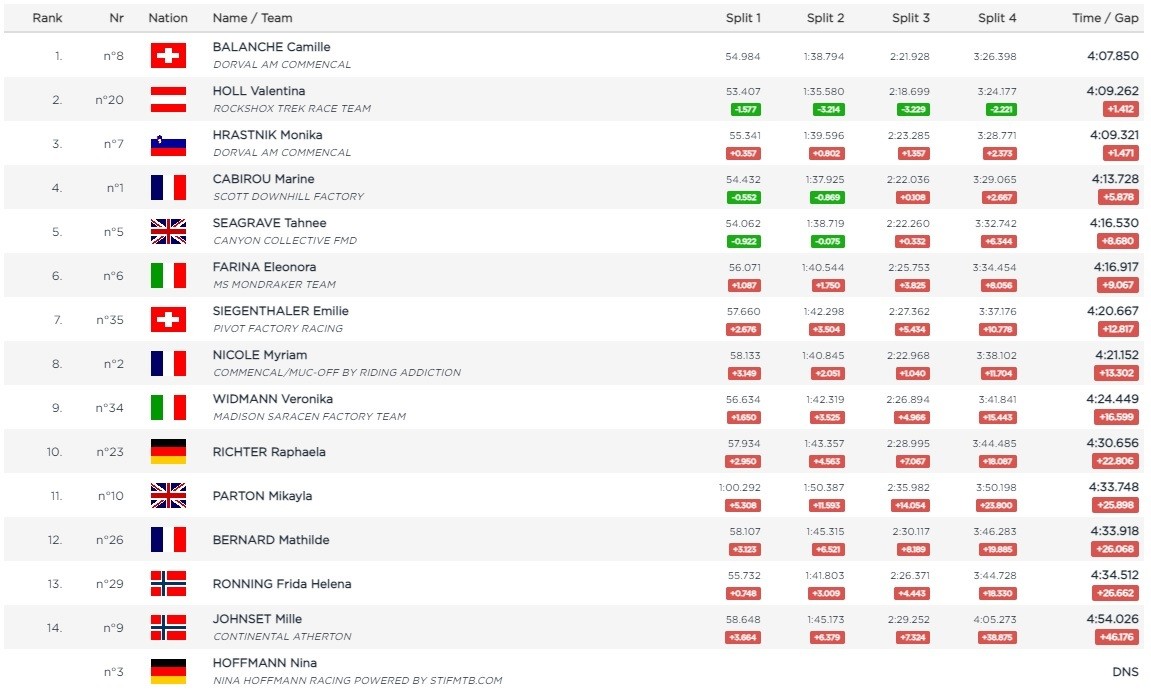 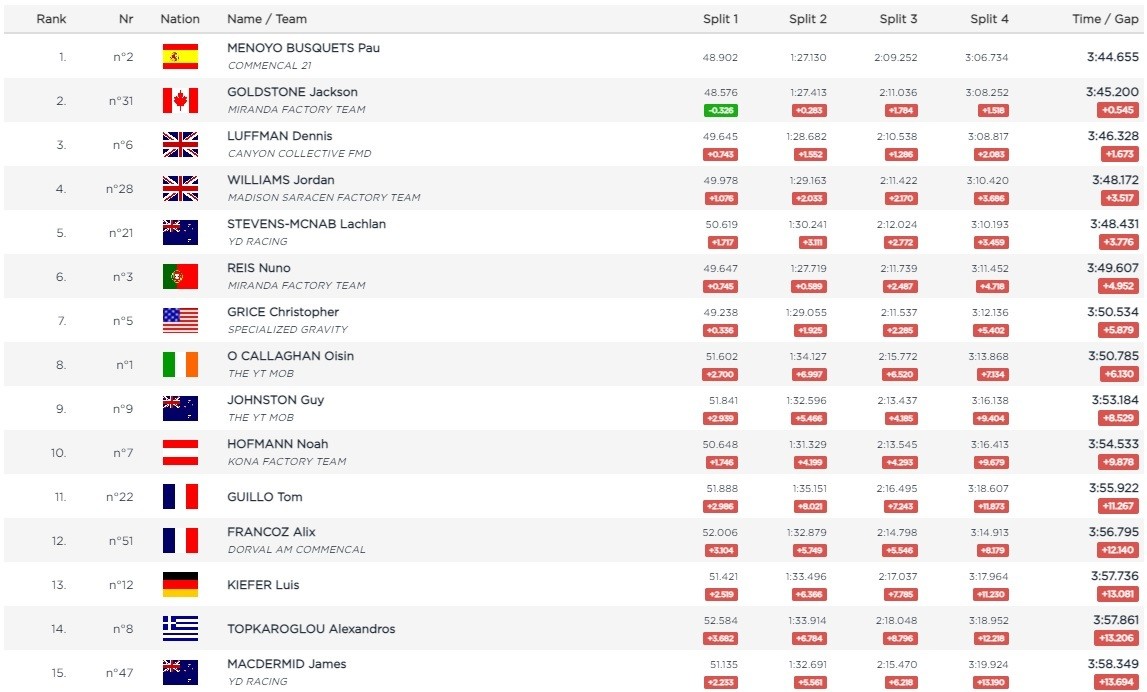