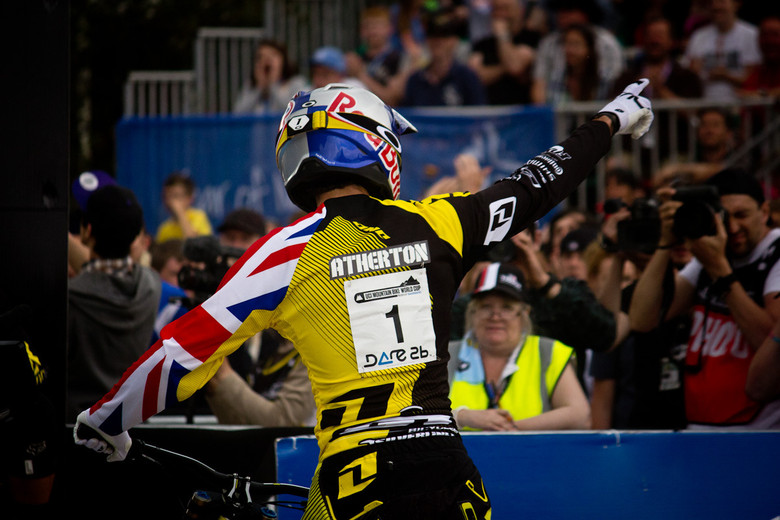 The first World Cup downhill race of 2013 is in the books. In front of thousands of cheering fans in a packed finish stadium, Gee and Rachel Atherton start off the World Cup season with victory. Race conditions remained dry, fast and loose in the highlands of Fort William, Scotland, three hours north of Glasgow, as the world's fastest downhill mountain bikers vied for the top step on the podium.

Strong head winds in the long pedaling sections near the finish proved a mental challenge for all riders as many struggled to clear the long table top jumps that were easily cleared in practice. As the Elite Men's top 20 qualifiers competed, times by racers were already approaching the fastest 4:41 mark earned by Danny Hart in qualifying the day before. Josh Bryceland (Santa Cruz Syndicate), who crashed in his qualifying run but raced as a protected top 20 rider, was the first to crack the 4:40 mark.

All eyes were on 14th place qualifier, Aaron Gwin (Specialized Racing) as he dropped in. Prior to qualifying, he was the man to beat in the minds of fans and racers, but his less-than-stellar qualifying run had everyone guessing whether or not he was trying hard or taking it easy on Saturday. As his race run commenced, his first split time was 9th fastest. 2nd split time, 6th place. Could he climb to the top? He could not, finishing with a disappointing 20th place by the time the rest of the field came down. He exited the finish area immediately after his run, clearly not happy.

Next up, 2012 World Champ, Greg Minnaar (Santa Cruz Syndicate) had similar poor qualifying results to Gwin, and the MTB world expected to see a race run that made us forget about his qualifier. Greg performed. First split of 11th place at the time had us guessing, but his second split time displayed first place. The rainbow stripes must have been working as he pedaled to an incredible 4:40.777, just .019 ahead of current hot seat holder and team mate, Josh Bryceland. Greg sat in first place with 11 riders left to go."I was too tense up top," said Greg as he questioned whether or not his run would hold up for a win. Greg ended up 8th overall, not where he wanted to be.

Flat pedal rider and multiple Fort William winner, Sam Hill (Chain Reaction Cycles), left the gate and one minute later was the fastest rider at split one, flowing through the rough upper portion of the track with ease. Eager for a strong result and return to form, Sam seemed on pace with the brutal pedaling section still ahead as he remained in first place at split 2. Pedaling be damned, Sam Hill came across the line in first place, two seconds faster than Greg Minnaar with a 4:38.843, the first rider with sub-4:40 time. Seven riders remained but Sam ended up 6th on the day.

The flat pedal battle continued as Brook MacDonald (Trek World Racing) came down the course with momentum and flow, but a first split time that was 8th place. He made up for it by showing a 2nd place time at split 2 and pedaled his heart out into first place (at the time) in front of Sam Hill with a 4:37.854. By the end of the day, Brook finished in second place on the day, only 1.1-seconds back, confirming that he is a major player on the World Cup downhill circuit. 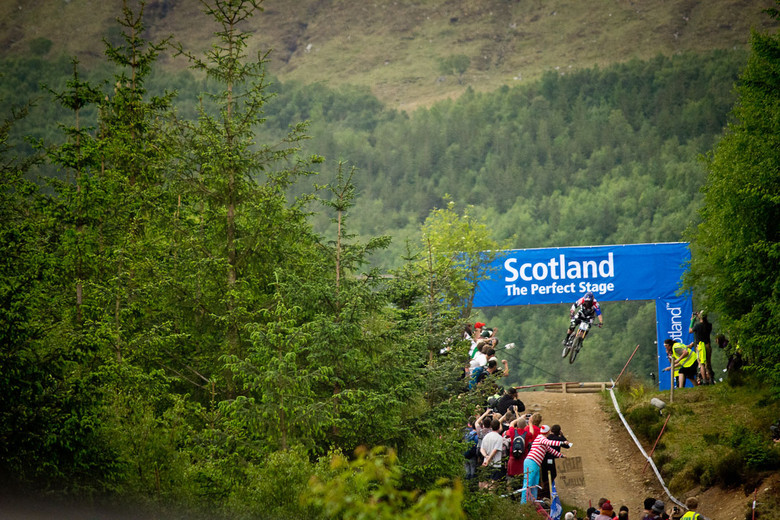 Steve Smith (Devinci Global Racing) was fastest at split one as he pushed his race run. The Canadian dropped to third at split 2 while pedaling like a mad man but couldn't quite make up the time set by Brook MacDonald. He squeezed in front of Sam Hill, just behind Brook. Four riders remained and Smith ended up in a strong 3rd place when the race completed.

Mick Hannah (Hutchinson UR) continued to build the excitement with a first place first split time by a few milliseconds. Having lost 20-pounds over the winter, Mick is fit and focused. Falling back to 6th at the second split, Mick had to make up for it in the pedaling section. Unfortunately, a win was not in the cards but the experience Australian earned a respectable 5th overall.

Sam Blenkinsop (Lapierre Gravity Republic) raced next. The gloveless Kiwi was 5th at split 1, made up time to get into 3rd at split number two, but remained just off the pace. with a 4th place finish come day's end, Sam performed very strongly and looks forward to next weekend in Val di Sole. Gee Atherton and Danny Hart were the only riders left to come down.

Gee Atherton (GT Factory Racing), on a brand new bike and only .176 behind Danny Hart in qualifying, posted up the fastest time at split one as he began his race run, nearly breaking the one-minute barrier. Gee remained out front at split two and the cheers of the crowd grew louder with the pedaling section remaining. Gee made easy work of the sprint and finished ahead of hot seat-holder, Brook MacDonald by 1.142 seconds with only Danny Hart at the top of the mountain.

Danny Hart (Giant Factory Off-Road) was the last rider on the course as the anticipation mounted. A close 2nd place at split one, just by milliseconds behind Gee's split 1 time, Danny's run just faded away from there. Unfortunately the fastest qualifier could only complete the race course in 7th place, meaning that Gee Atherton took the victory, making it a double win with his sister, Rachel taking the women's victory in Scotland

"It's a pretty emotional feeling and for me it doesn't get any better than this," Gee said during a post-race interview.

Rachel Atherton (GT Factory Racing) proved patience and determination pays off. She obliterated her competition in the women's field by over 10-seconds with her first World Cup victory in Fort William. At 7.5-seconds up on the field before the final pedal section, Rachel took an additional 2.5-seconds out of her competition on the most mentally challenging part of the course, pedaling strong all the way to the finish. Her final time of 5:08.846 was nearly 5-seconds faster than her qualifying run from the day before. Making it a British one-two in the Women's field, Manon Carpenter finished 2nd while France's Emmeline Ragot dug deep for a 3rd place. 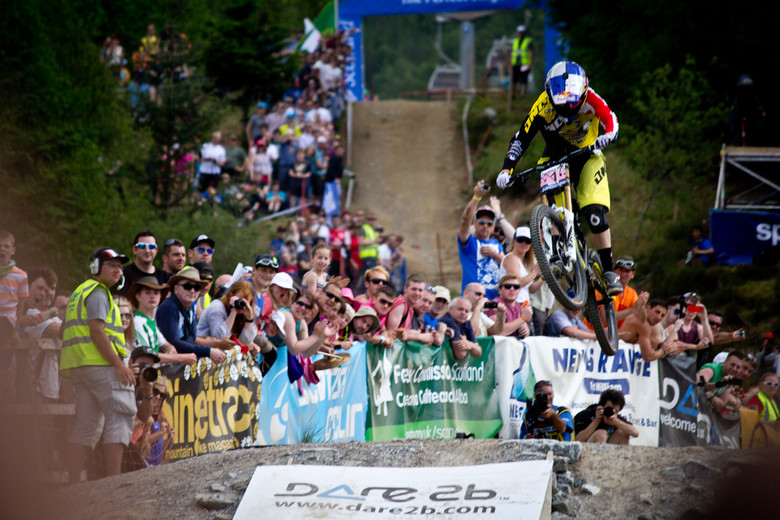 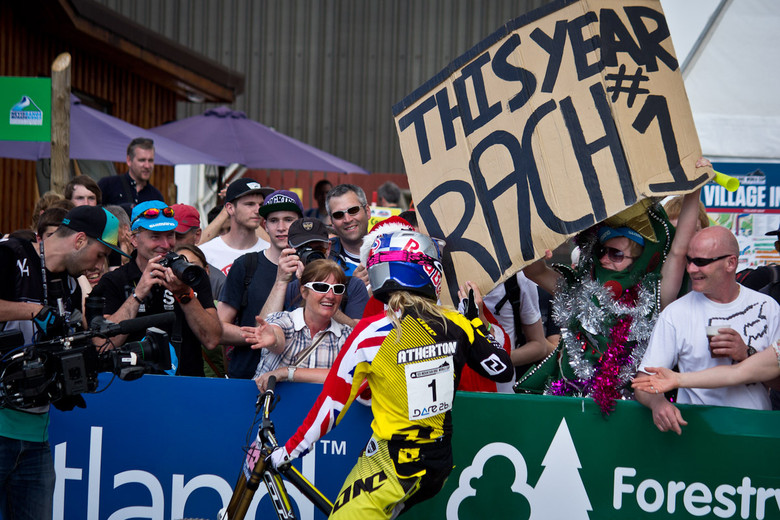 Scott GSTAAD's Noel Niederberger proved to be the fastest and most consistent junior of the weekend. Qualifying 2nd yesterday, he kept himself and his bike in one piece to take the victory over the young guns. Fastest Junior qualifier, Taylor Vernon, flatted, putting him out of contention for the podium. Second through fifth place finishers in the Junior Men's category were all within .6 seconds of each other proving there will be some serious battles going on in 2013. 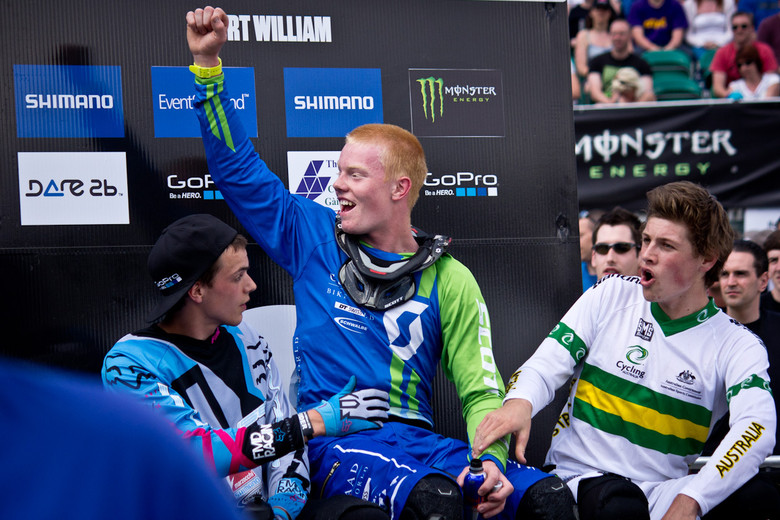 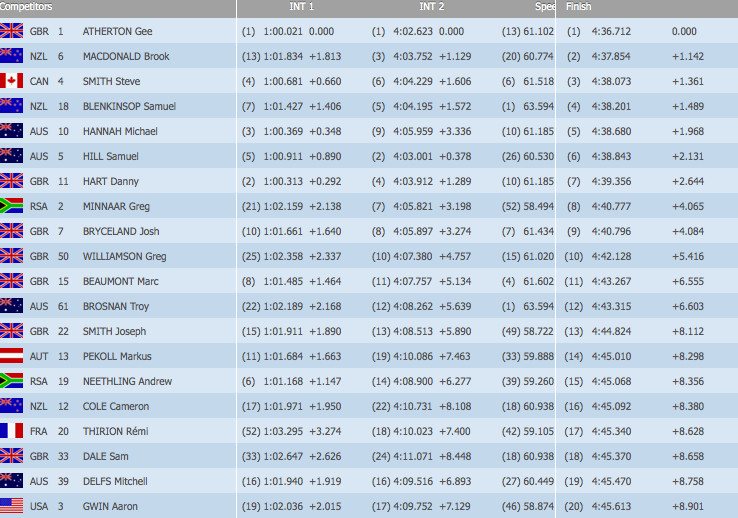