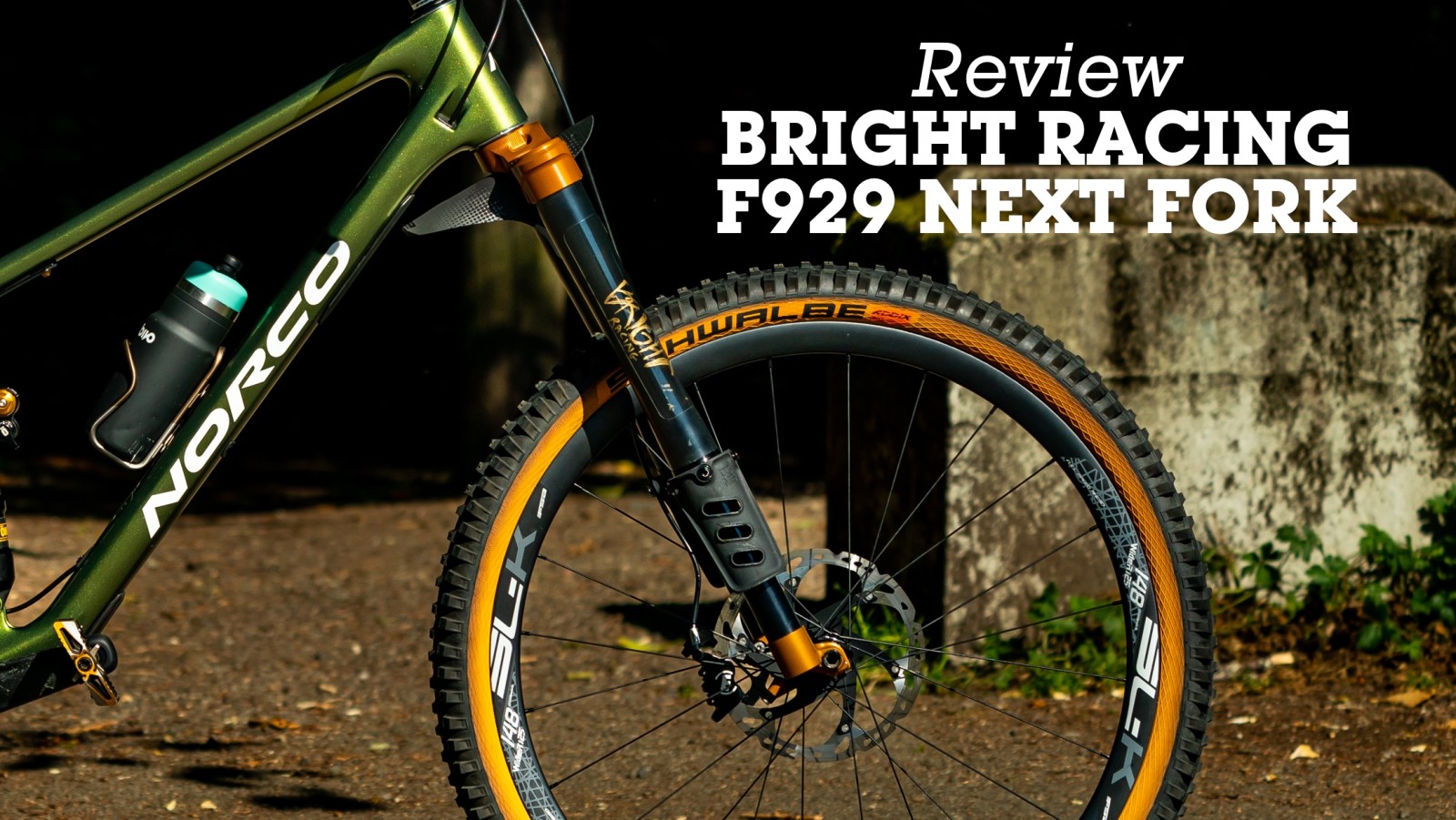 All things being equal in the face of full transparency, I work for Full Speed Ahead (FSA) as their MTB marketing manager. I get to ride a lot of different bikes and have a lot of experience (40 years on two wheels), including running my own bicycle brand from 2006-2014 (One Ghost Industries). I’d like to think I have a solid clue about what suspension does and how it should feel. At the very least, I know what I like.

Now that's out of the way, I was given a Norco factory team Optic frame earlier this year. This was my first Horst Link bike in a long while. Normally I ride VPP or DW-link bikes as they suit my style of riding (loose and ridiculous with a dash of out-of-control). I do not like jumping, but I love rocks and going over them fast. I like bikes that stay glued to the ground and go where I point them. I never got along too well with Horst link bikes because they have always been too playful for me. They like to go fast, but they also like to pop up and out of corners and prefer to leave the ground much more than I do. Traction is only good when you are on the ground. 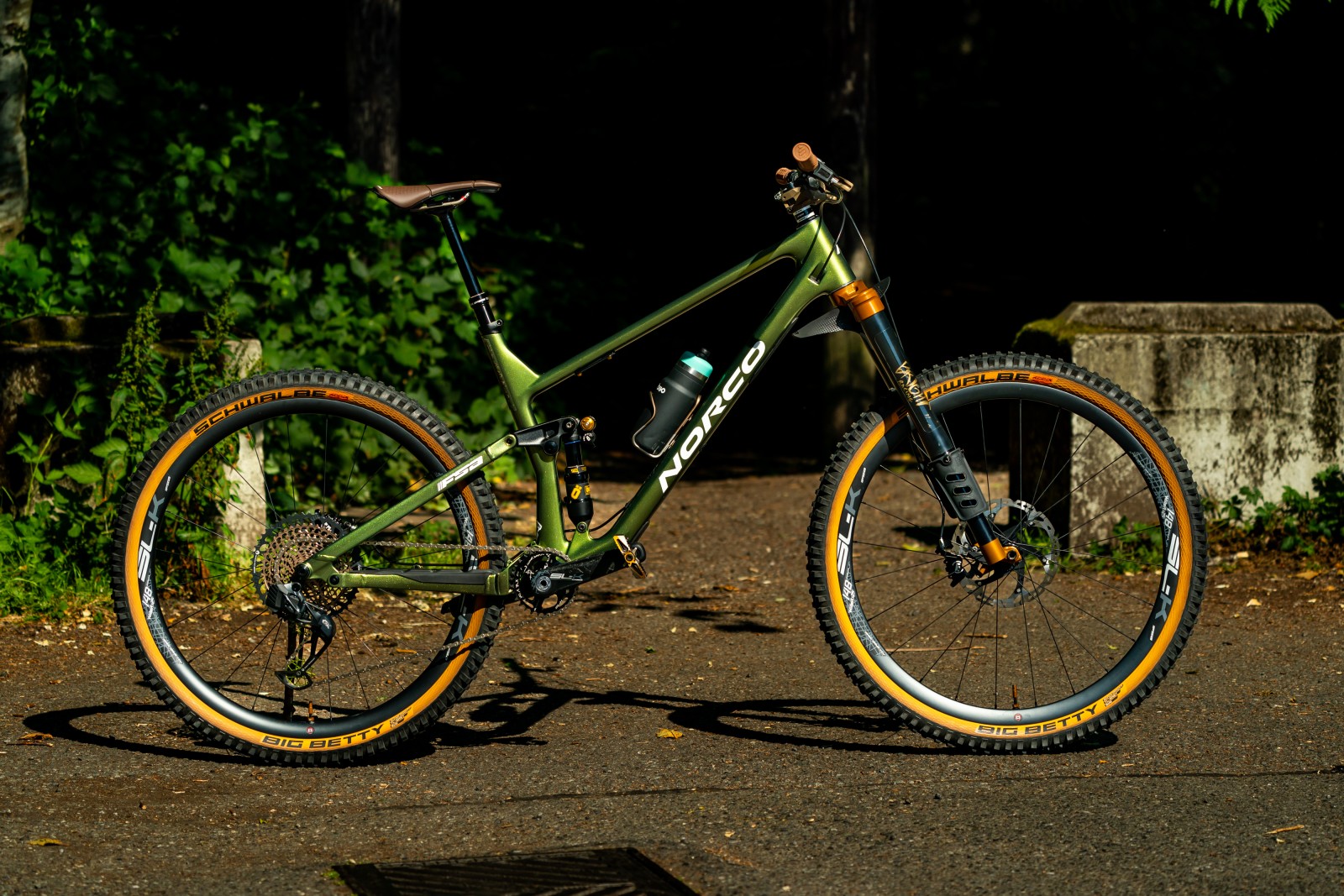 Regardless of design, I was stoked to get the bike. I always liked Norco and have a history of supporting their team through other companies I worked for. And hell, that Optic is just a really rad, capable bike, plus it was factory team green, so I was all in. I picked the parts I wanted; Ohlins TTX air shock, SL-K WideR wheels, Schwalbe Big Betty tanwall 2.35 tires, SL-K carbon cranks, Crankbrothers Mallet DH 11 pedals, Gradient carbon bar, Magura MT5 brakes. I even had the Gradient stem and the brake levers custom Cerakoted to match the green/gold/tan colorway. It came out bad-ass IMHO. But the crux of the build...what fork?

I could have gone with an Ohlins to match the rear shock, but came across the Bright Racing NEXT fork somewhere. I honestly cannot remember where I saw it first. Probably on Instagram. I saw some custom-colored models and it was just, "Yes, that is the one!" So, I contacted Bright Racing. They offer a custom shop option, and that is what I wanted. This was going to be a show bike, not just my personal rig for product testing and riding, so it had to be a head-turner. After talking with Pablo via email and WhatsApp, I had him build me a fork based on his enduro model with 35mm stanchions and 49mm carbon outer legs. The cartridge would get 148mm travel, and there was custom anodized color to the crown and feet to make it just POP. Damn it does just that! And I did pay for the fork, it wasn’t free. 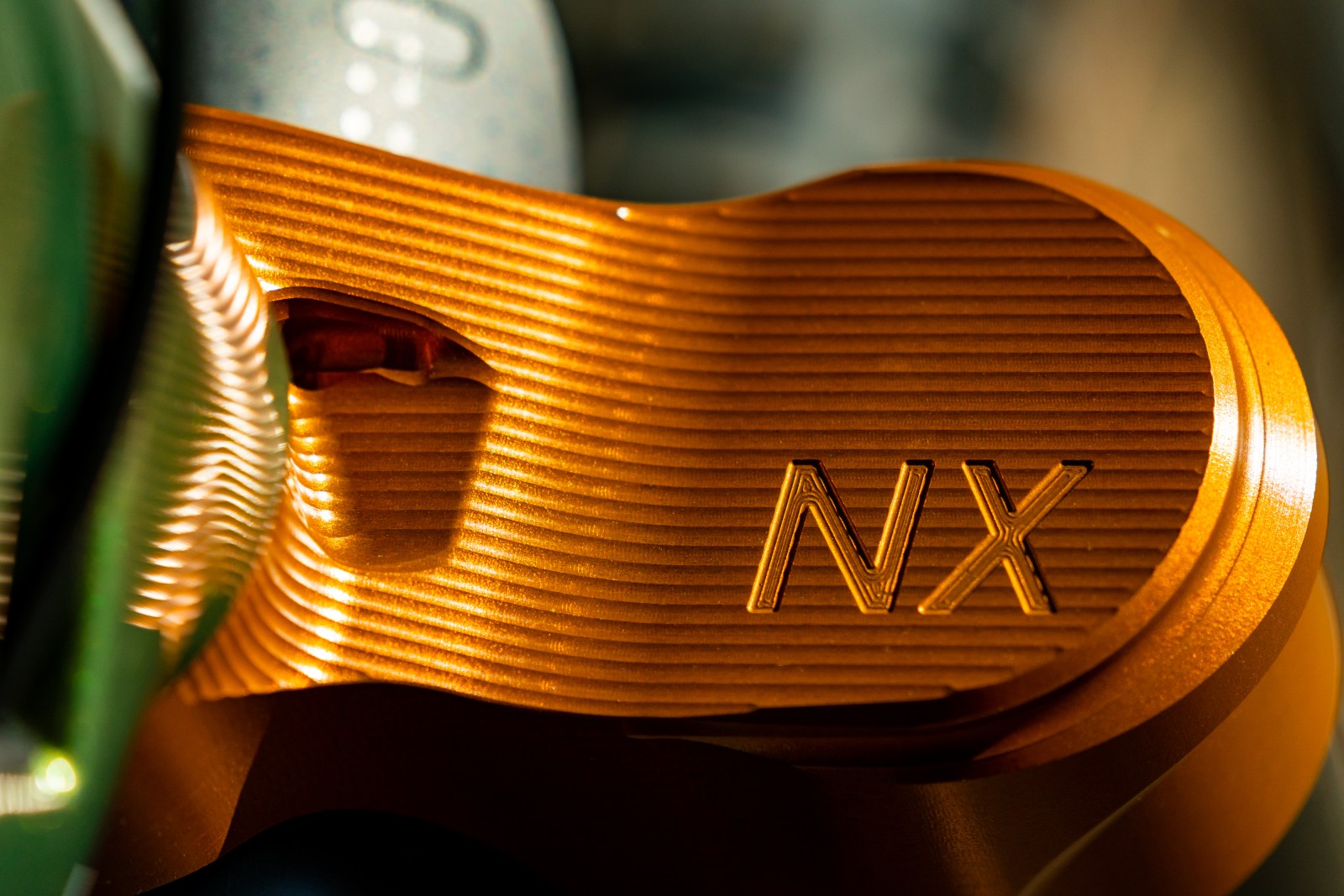 The inverted fork uses Torque caps, has carbon uppers that are tapered at the center then bulge back out at the seals adding to the crazy-unique look. It runs floating bushings  and is air-sprung. The cartridge pulls out and is fully serviceable by the end user. Pablo uses lots of acronyms on his website. ACAD (which I misread a few times) is the thing that really had me going. “Hmmm” the fork does not sag? That is right, no sag, WTF? Right?!? Well, he is on to something with this.

The fork has ~20mm negative travel, so it is always pushing against the ground (remember that traction = speed). Taken directly from his website: “The BRIGHT-RS systems are characterized by a highly evolved and balanced damping system. They are designed to ensure great sensitivity and not fall into the error of requiring the spring to do all the absorption work (as occurs in less sophisticated systems). This eliminates the static sag which does not give any advantage to the driver who has a certain level of driving performance. All this makes the front end much more manageable and responsive. Static sag in a commercial fork removes about 20-40mm of active travel. A 180mm-travel fork becomes approximately 150mm before use.”

In other words, a fork with 170-180mm travel is effectively only 150mm at full use but will have a significant amount of force trying to push it back to full travel. So you can only reach full travel when the fork leaves the ground and comes back to the earth. With Bright forks, you always have full travel. It honestly took me a few times of saying this to myself to get the idea straight in my head. The Bright also has a very "Trust Performance" feel to it (unpopular opinion here, I LOVED my Trust Message). 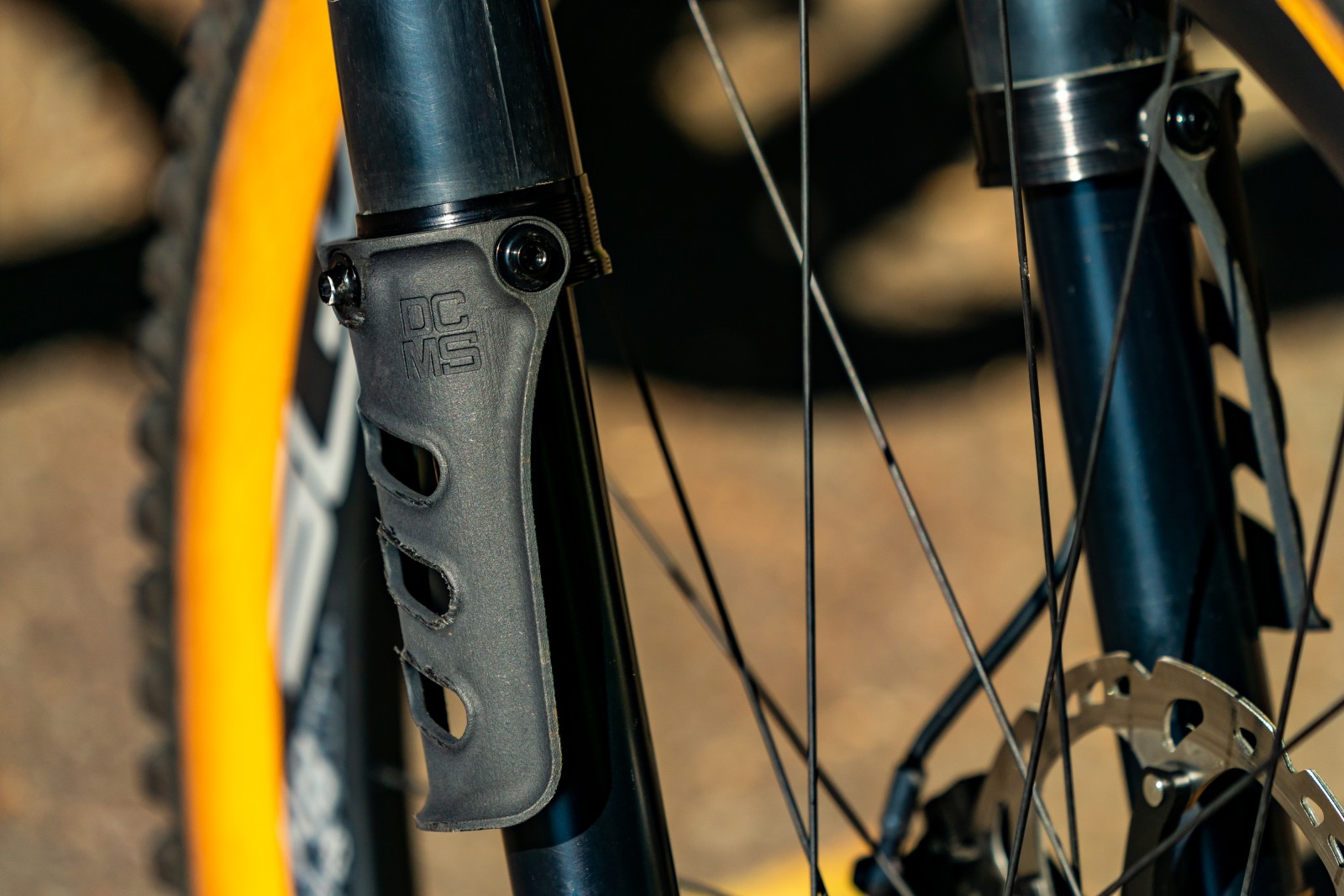 I am sure you all are saying “hold up there, did you say floating bushings? WTF is up with that? Bushings do not float." Well, no, they do not. At least not in traditional, right-side-up forks. Most forks have static bushings that are pressed into the lowers. These are a pain in the ass to replace at best and can fail at worst. From what I can tell, all Bright Racing Shocks’ forks use floating bushings that follow the stanchions as they cycle in travel. This allows them to always be in the optimal place all the time. The bushings are self-aligning and help keep that fork running smoothly while tracking straight. Here is the photo from the Bright Racing site to illustrate: 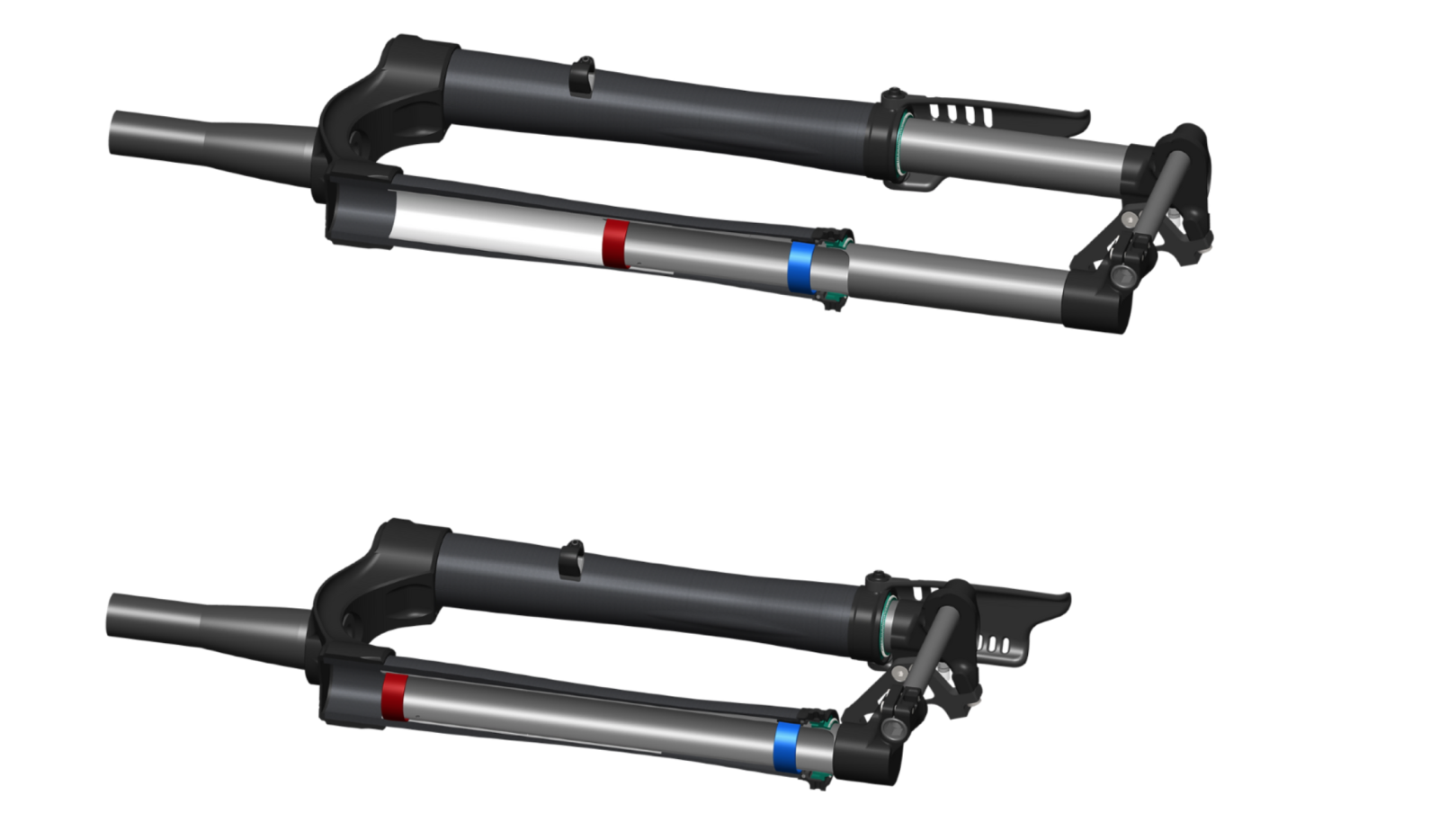 The cartridge itself is so simple it is genius. The entire lower leg on the left side is the air chamber. It is separated internally into two chambers, one positive and one negative. The positive takes the air charge while the negative is just that, nothing: it is a blank chamber of whatever air was in the leg at the time of assembly. Bright calls it a “hollow air spring” and it acts as the bypass chamber as the fork cycles. This creates a progressive suspension curve to the air spring as the fork cycles. Air passes from a large chamber into a smaller chamber as the fork compresses causing a more progressive build-up. 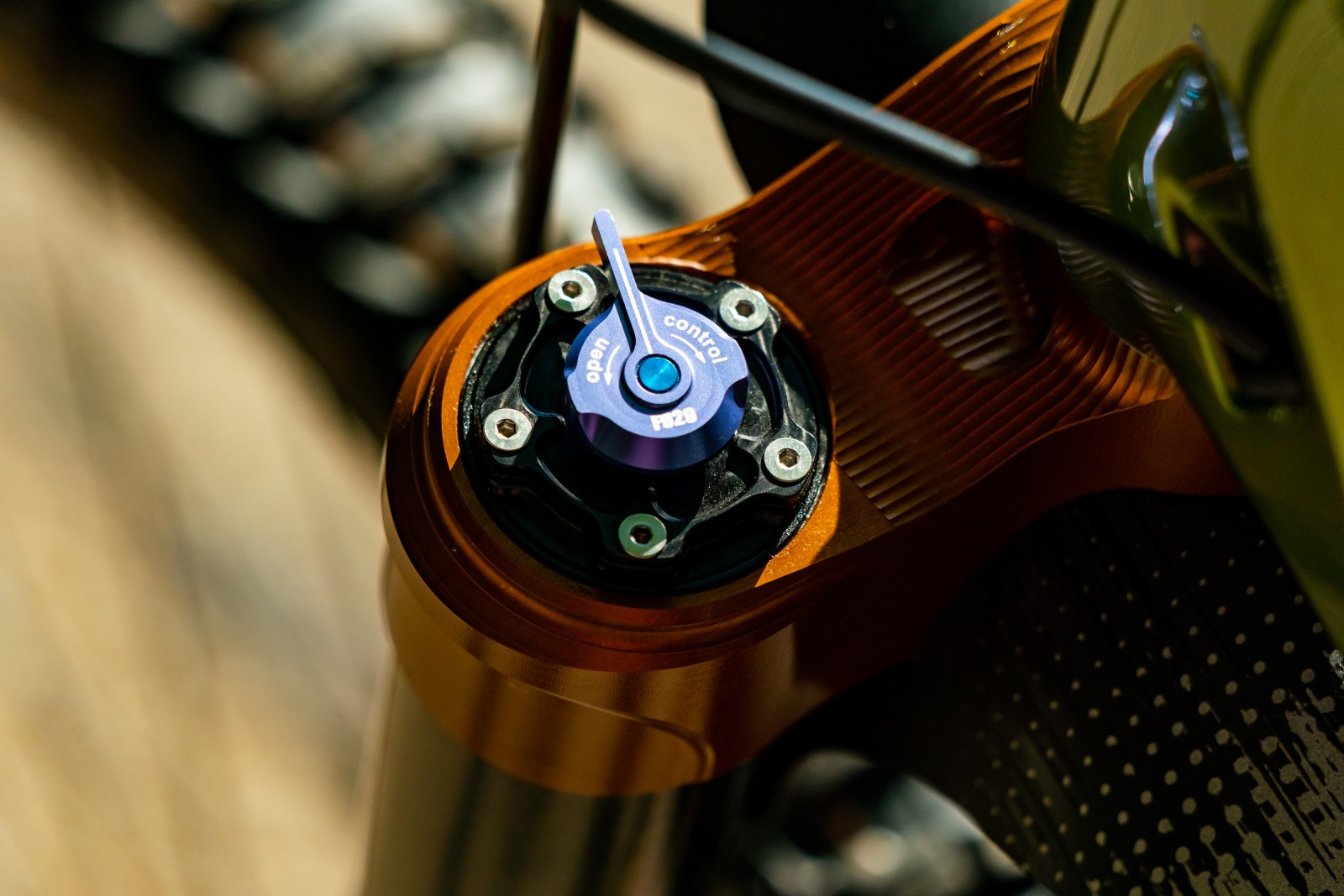 The rebound/lockout cartridge is just flat-out smooth. The biggest thing I had to (and still must) get used to is that there are no indent clicks. You cannot count clicks when setting this fork up, so that was a little disconcerting at first. I like clicks. Clicks are idiot-proof. I, like most MTBers, can be an idiot. I have built and tuned quite a few forks and shocks in my lifetime (not Jordi-level, but I know my way around suspension), and I tell you, this is hard to get used to. Rather than having a set of defined points that the adjustment lever and rebound knob click into, they both just turn freely.

Bright Racing's reasoning: “Our SL system is represented by an exclusive multidirectional valve which, when applied to the NEXT version, is responsible for semi-automatically managing the oil flow during the compression phase. The exclusivity of this system lies in its great elasticity and ability to smoothly adapt the flows of the high compression speeds during the various driving phases.  Even the bobbing effect is reduced in the relaunch phase which is stabilized by the system allowing you to think only of driving. This exclusive system is one of the features most appreciated by our athletes because it allows obtaining a continuous correction of the dynamic flows of the hydraulic cartridge” (sic).

This tells me the cartridge Pablo has designed (which he tunes them for each fork/rider) has some real magic in it. The valves are always open but there must be several variable valves in a spiral pattern. I have not taken the cartridge apart (nor do I really want to), but this is what I imagine is going on inside. The oil flow is there, the fork is smooth as melted mayo, and that dynamic lever to tune compression from fully open to locked out just works. It does not spin out of place unless you hit it in a crash. I took a silver sharpie and marked where I like the fork and wrote the number of turns to get there on the backside of the fork. I know I should just be a total nerd and make notes on my iPhone with all my settings per area I ride, but I do not have time for that, I just want to ride, and as a working dad of two young kids, my ride time is precious. 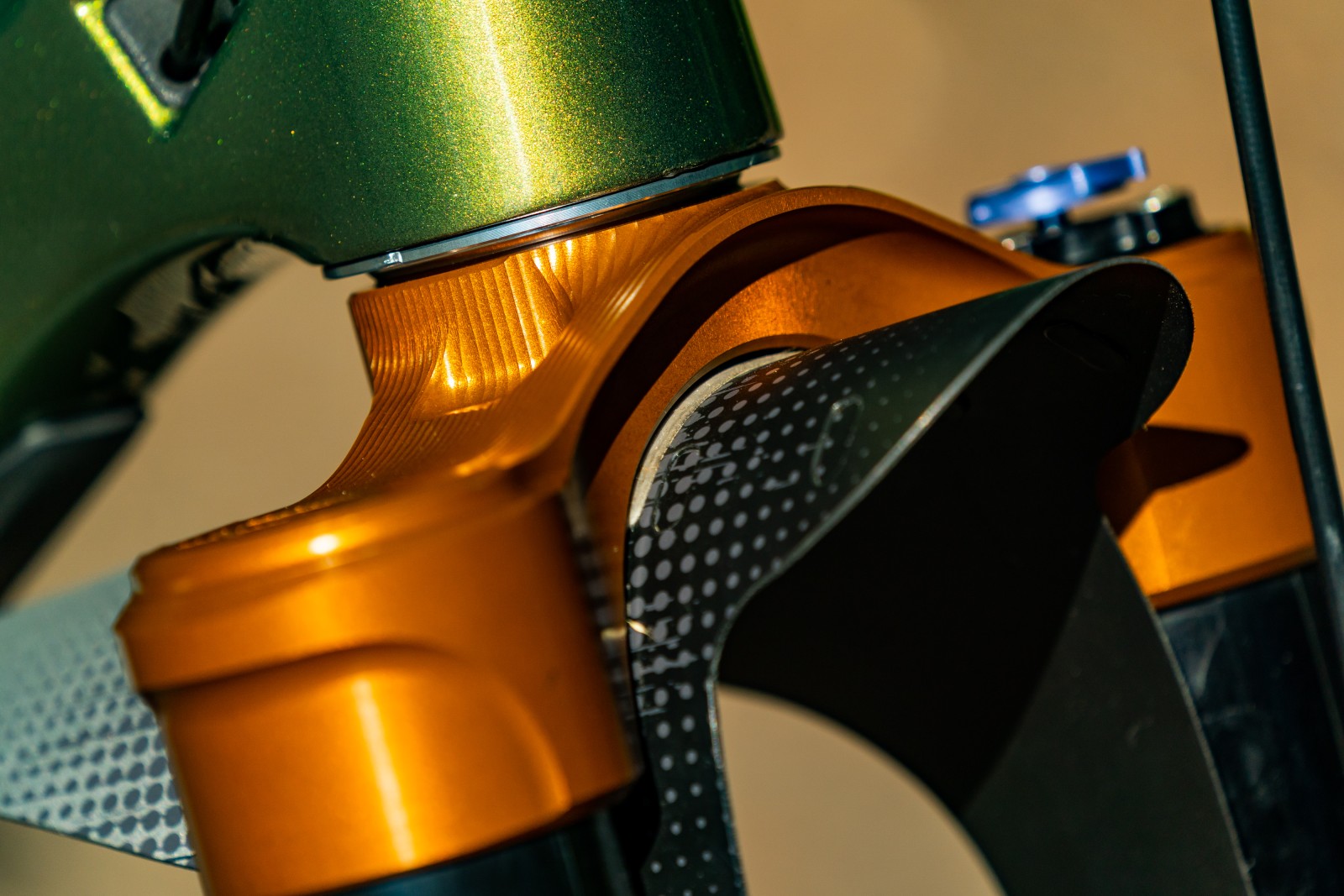 So, How Does It Ride?

Those of you out there that have ridden a Trust fork and liked it...there is a feeling where you are always in the same position at the bars while the fork is working and keeping you connected to the ground. That's the “Trust effect” they would talk about. This fork from Bright Racing has that. I felt upright, in control, and inside my bike at all times. The fork tracks the ground, all of it, everywhere I point it. It rides like a 180mm dual crown. There is no stinkbug effect to the fork, especially when going into something nose heavy. My head angle did not change enough to notice or toss me off my lines. When I came down nose heavy, the fork ramped up and didn’t cause me to dive head-over-tea-kettle. It just settled back and allowed me to re-weight my body more rearward and continue. 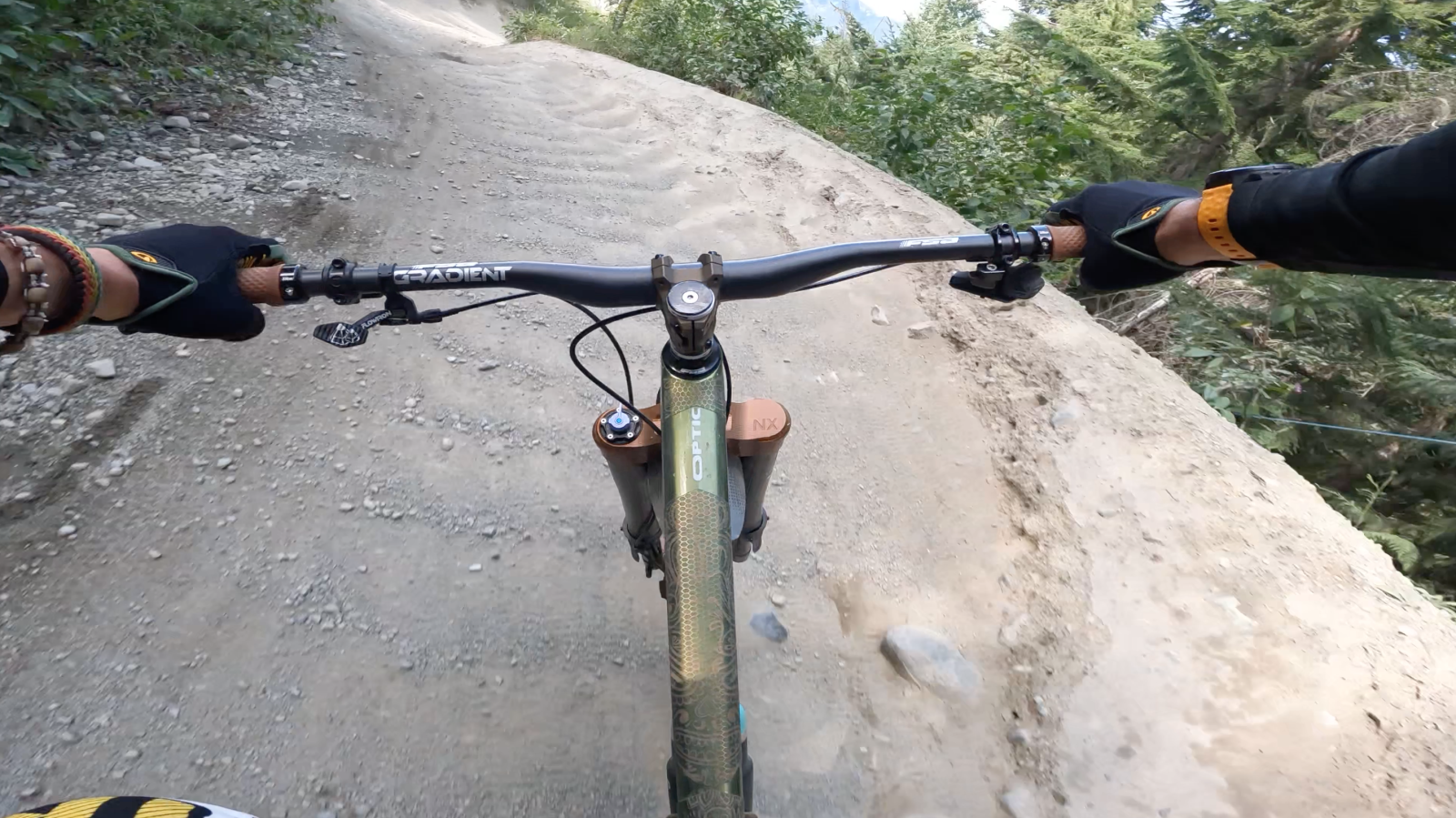 The Bright NEXT fork absorbs all the stutter/braking bumps in ways I cannot understand. Hitting rock slab sections in Whistler this summer at 25+ MPH and keeping up and passing other riders on full DH bikes was just an unreal feeling. Like I could go race any enduro and finish it. My arms did not get tired. I did not feel as if I was vibrating off the bar at any time, even over the high-speed rocks and braking bumps. 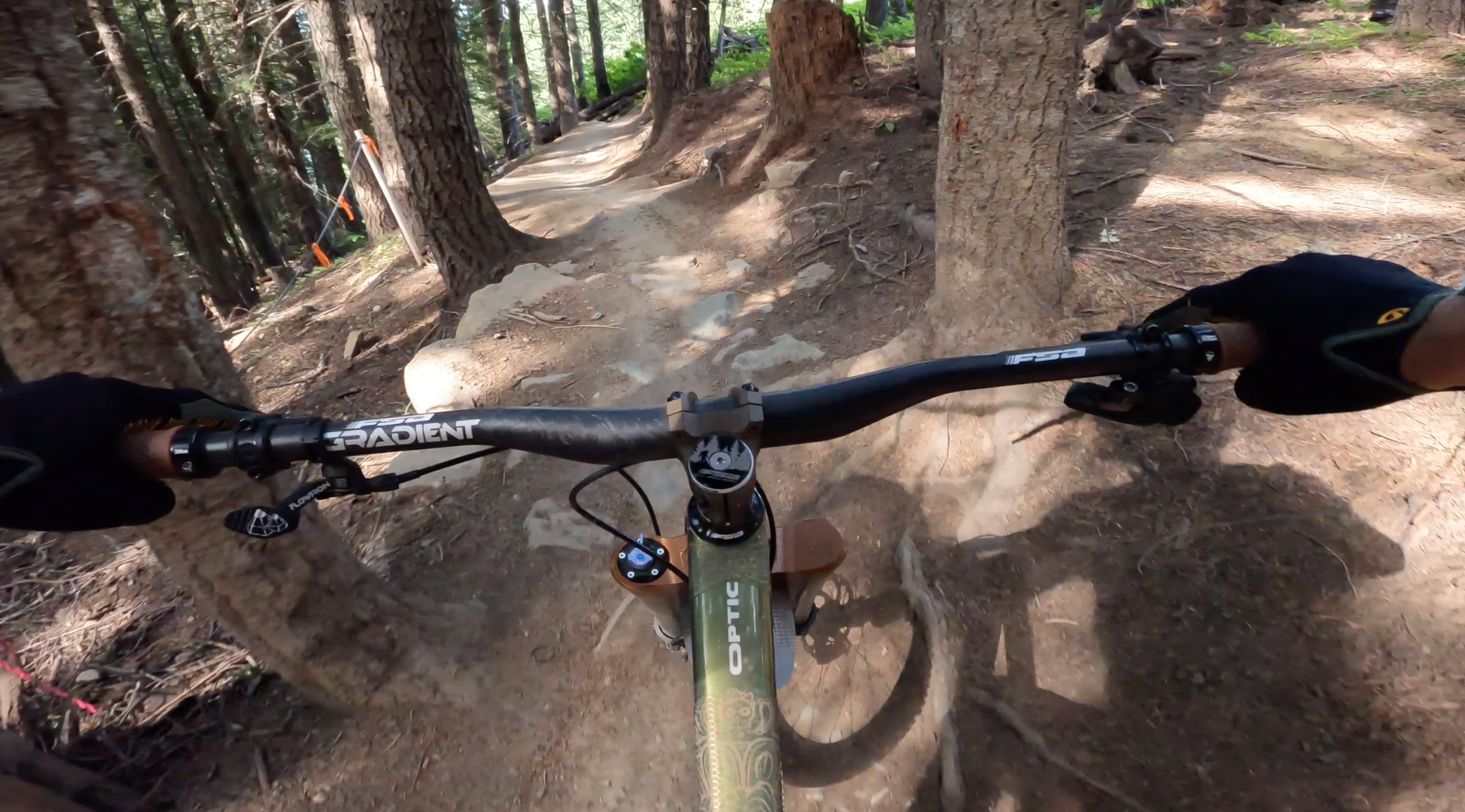 The front-end traction gave me confidence to drop my tire pressure from 27 PSI to 25-ish, and after a few runs I was starting to really lean into the bike and let it dance under me. The more I pivoted at my hips and allowed the bike to castor under me and follow the trail by its own free will, I gained confidence and speed.

I have been riding on it since April 2022 and have at least one ride a week on it all summer with a full week of laps on laps at Whistler during Crankworx. 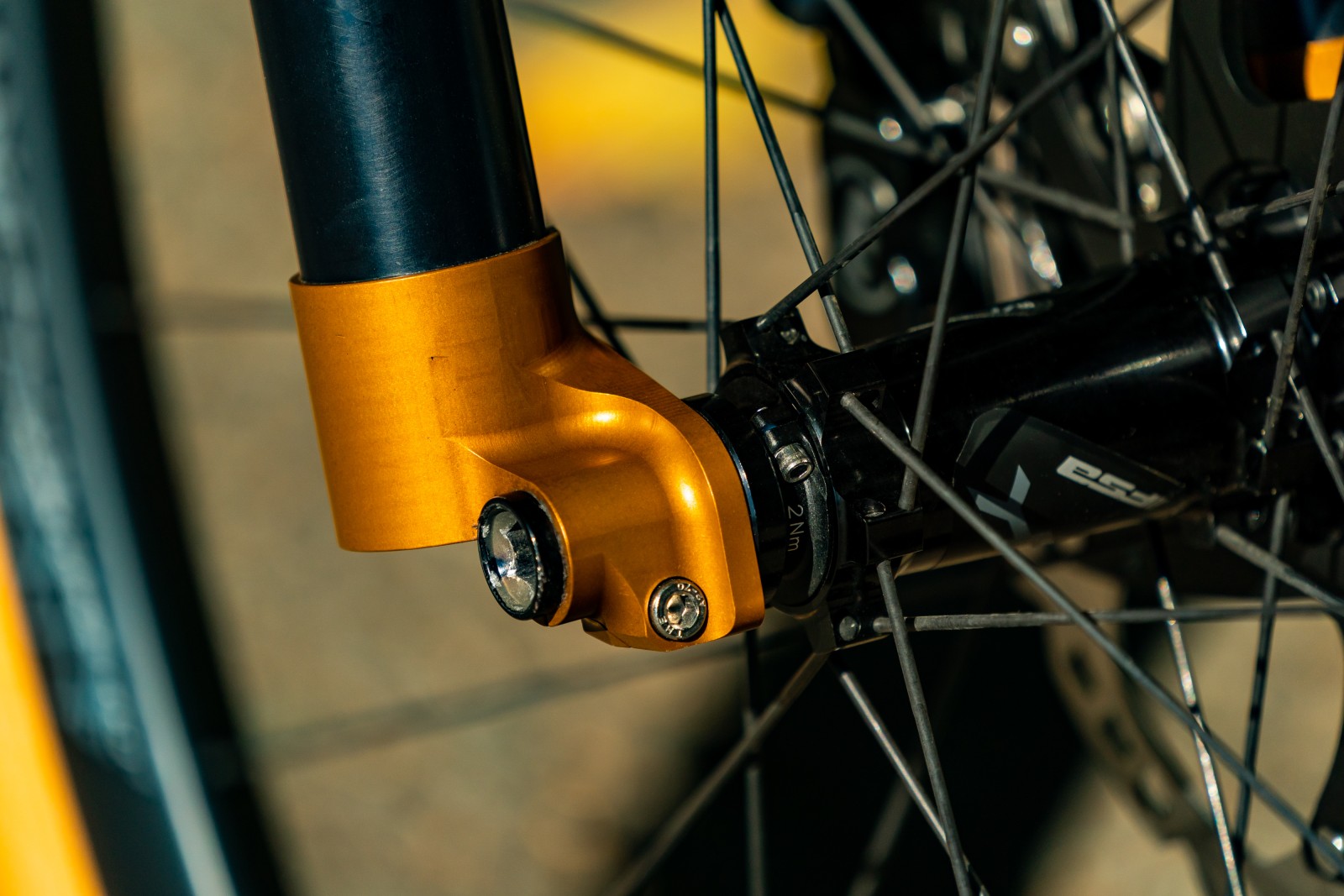 The fork is expensive, no doubt about it. But then again, it is custom-made per order and set up specifically for the rider and the bike it will guide down the trail. This alone makes Bright NEXT fork worth the price of admission. Pablo has been making suspension for a few decades now, going back to the early 90s. He has a full page dedicated to his legacy  and it is worth reading - Read it here. The guy really does understand everything about suspension. His products are beautiful, bespoke pieces of art designed to help you go faster. They are bad ass to look at and punch well above their weight limit. Speaking of weight, this fork I have is 2.20 kg or 4.85 lbs.

More information can be found here at https://www.brightracingshocks.com/mtb-fork-f929-b-regolarita

David spent the last 11 years in sunbaked SoCal when a recent move to the PNW made him remember how much he missed the traction found in actual soil. He has worked for Marzocchi, Crankbrothers, Specialized and operated his own bicycle brand, One Ghost Industries. He retired from professional DH racing in 2003 at the request from multiple neurologists.