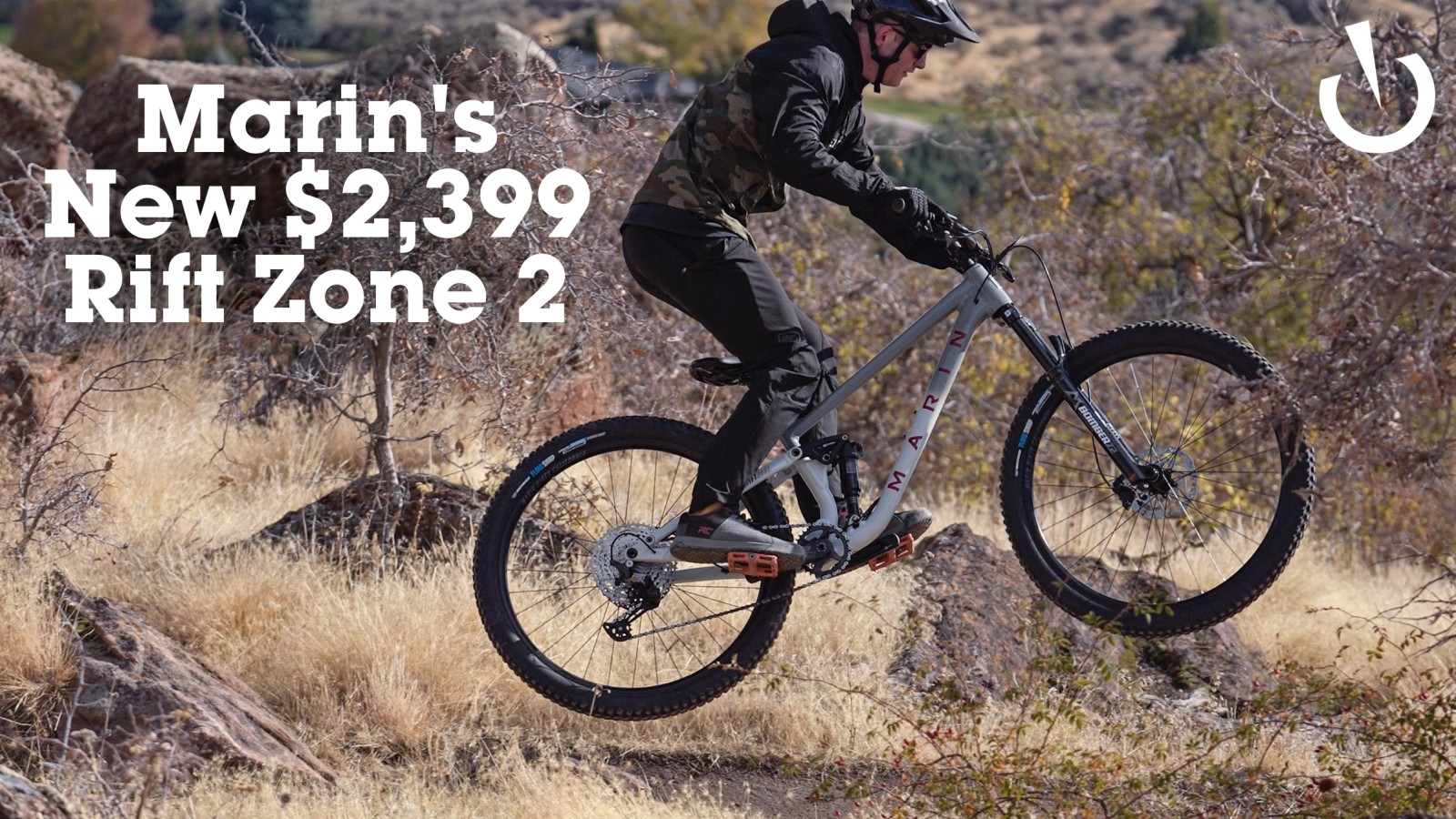 A few weeks back, Marin contacted us about their new Rift Zone and asked if we wanted one to try out. We said heck yes, Marin shipped the bike promptly, and we managed to get Vital shredbot, Logan Brown, on the Rift Zone for a very brief first-ride impression before an early-season snow shut down the trails.

What Marin Says about the New Rift Zone (press release)

Petaluma, Calif, November 14, 2022 - The Marin Rift Zone is made to party, whatever your jam may be. Your ideal partner for everything from all-day epics, to local shred laps, and everything in-between. Critically-acclaimed since their debut over five years ago, they epitomize our Made For Fun mantra above everything else, and are the heart and soul of Marin’s full suspension lineup.

Rift Zone alloy models are all-new from the frame-up for 2023, with more travel, fresh geometry, updated suspension kinematics, and refined details. Furthermore, the lineup has been aligned between the 29” and 27.5” wheel size models.

And this just in, the new Rifty has already won Gold, with Marin-sponsored ambassador and all-around awesome human Martha Gill taking the top step on the podium in the Dual Slalom at Crankworx Rotorua 2022. 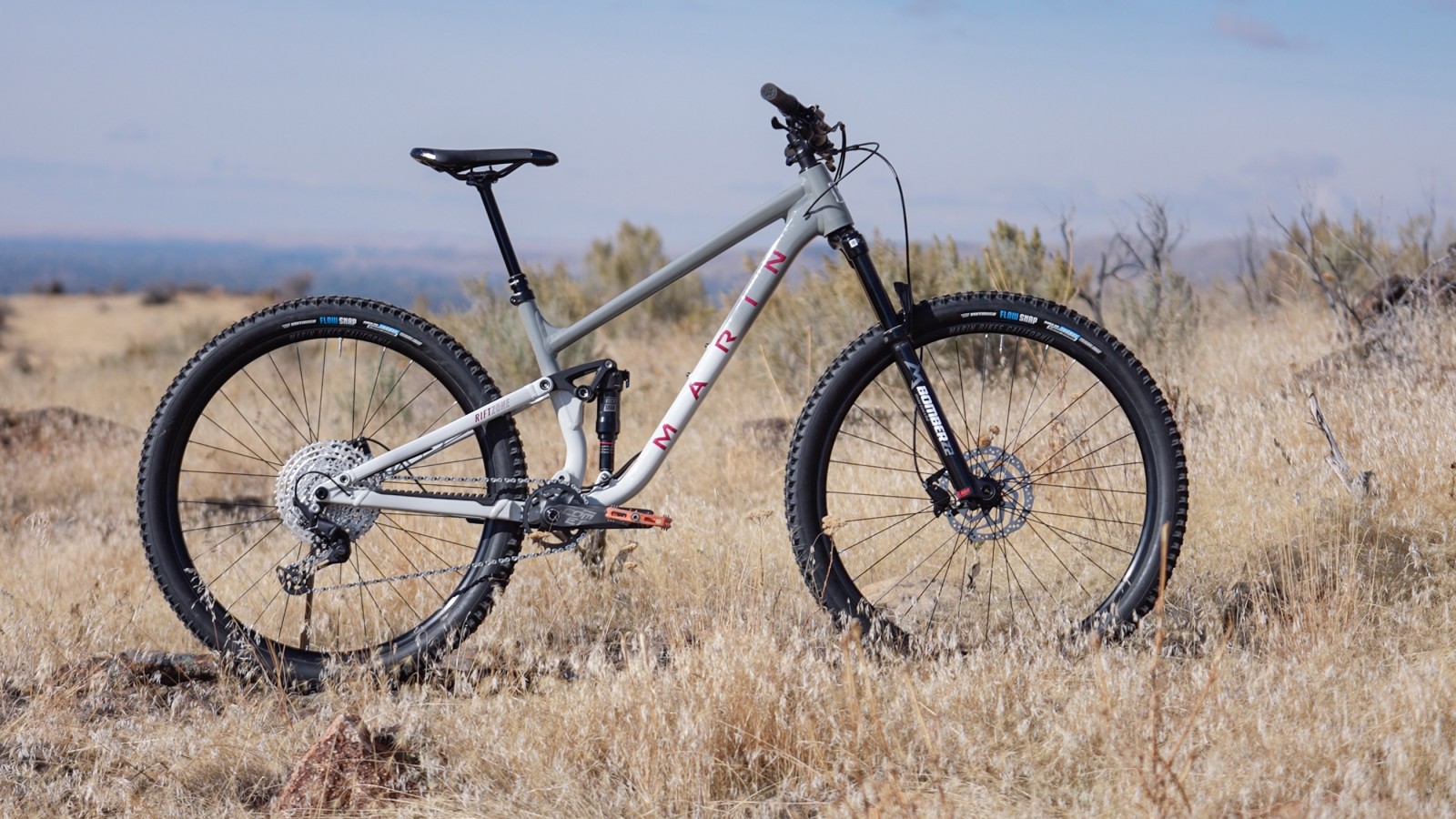 Series 3 aluminum frames with new tubing and forgings freshen the Rifty’s overall aesthetics, with a shorter seattube and lower standover from previous models. Slick braze-in cable guide entry and exit ports look great and eliminate cable/hose rattle. Cable routing is built into the forging, and the bike is a zip tie- free zone. Out back the dropouts are now compatible with SRAM’s UDH rear derailleur hanger. 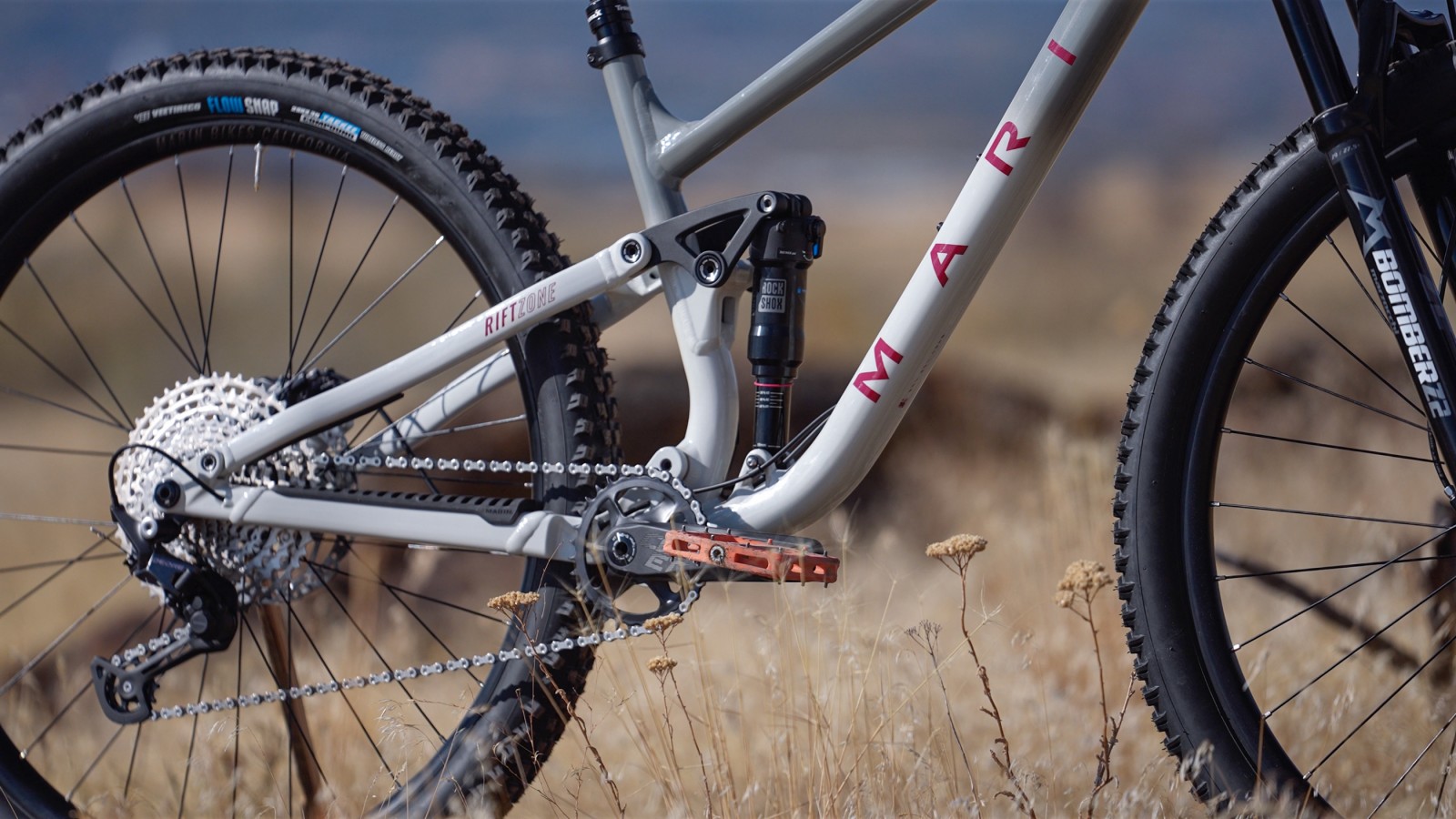 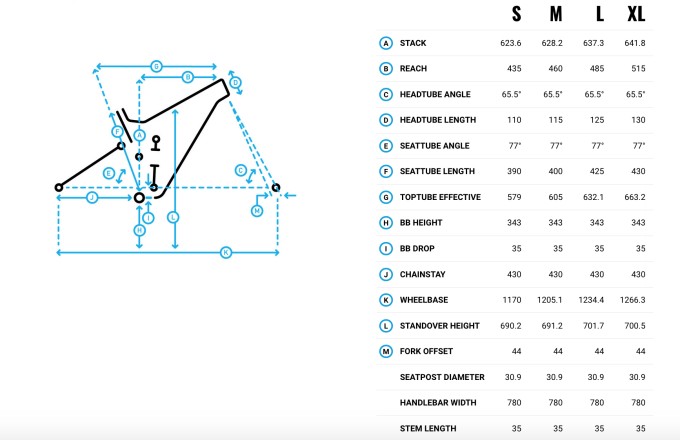 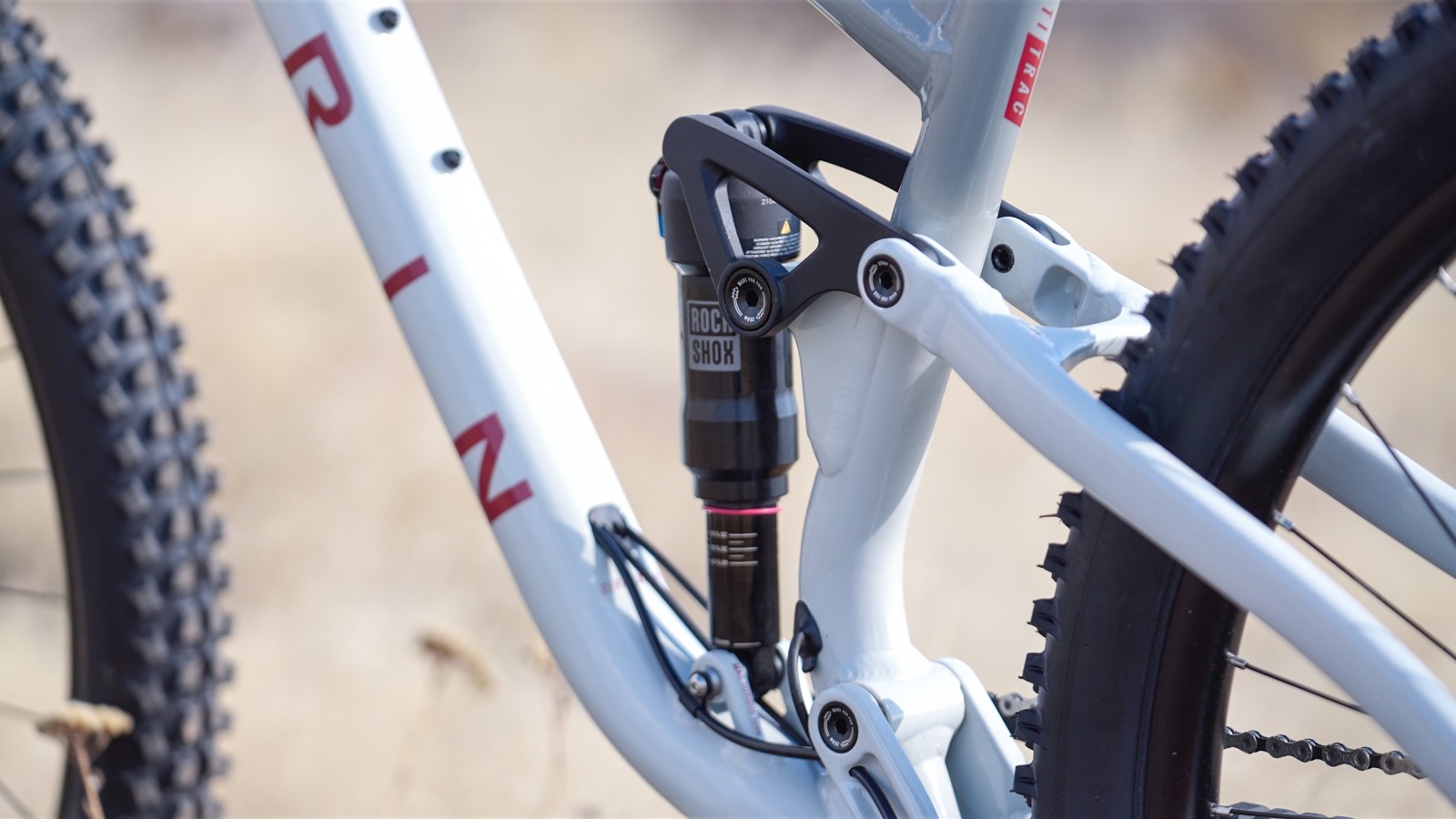 The team here at Marin spent countless hours dialing in the frame kinematics, ensuring maximum performance with current shocks on the market. From there we worked with engineers at FOX, RockShox, and X-Fusion to dial in the tunes to deliver the best combination of pedaling efficiency on the climbs and flats, while delivering bottomless-feeling control on when the going gets rough. The new Rifty doesn’t just have more travel, it also improves on the way the travel is used.

One key feature that hasn’t changed is the Rift Zone assortment, with three each 29” and 27.5” models, and the 26” and 24” for the young rippers. Now these models have been homogenized between wheel sizes, so colors, specifications and pricing remain the same at the various 1/2/XR levels, no matter the rolling stock.

Wait, what’s that? What’s up with this “XR” model? That’s the replacement for what had previously been the Rift Zone 3. The new XR is our “riders’ spec” model, a spicier take on the Rift Zone with some of the best bang-for-the-buck suspension and drivetrain spec available. 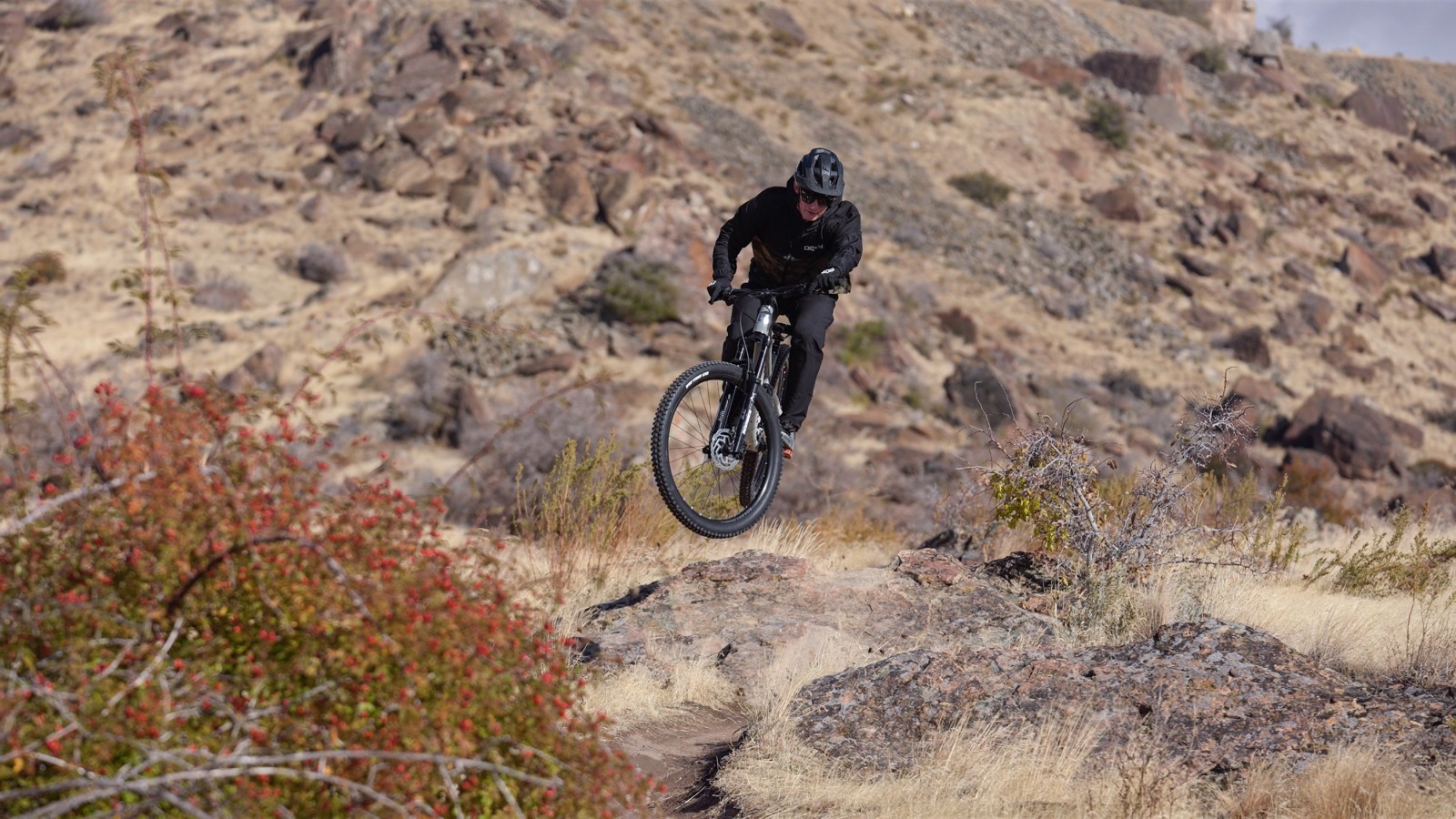 As we said above, our test Rift Zone 2 29 arrived just as a trail-closing snowstorm was arriving, too. We've spent a lot of time on the three previous versions of the Rift Zone (two alloy and one carbon) and enjoyed them very much in the fast, rolling terrain of the Boise area. We were curious to see if the addition of 5mm of travel out back and 10mm up front, paired with an even longer reach would change the playful character of the Rift Zone that we've come to love. It did.

The 2023 Rift Zone is a planted bike thanks to geometry that starts to approach that of an enduro bike. Besides the extended 5mm reach, slack 65.5, our chainstays measured approximately 438mm with our tape measure. Marin's geo chart says the chainstays are 430mm, so we need to follow up on that. With modern internetting, we understand why Marin would stretch out the Rift Zone while adding more travel, but at over 35 pounds for our size large, it's a heavy bike, too. The older Rift Zones weren't featherweights by any means, and in our 2020 Short-Travel 29er Test Session, our testers had feedback that the Rift Zone Carbon, while stable, lacked in the pop department. And now with the addition of a bit more travel and reach, all of the little tweaks add up to make this trail bike in its 29-inch-wheeled form more of a freight train than a fleet-of-foot trail popper like the 2018 Rift Zone we really enjoyed 4 years ago. We feel there's a bit of an identity crisis with our 29 2 model as it hopes to be an enduro bike someday. On the trail, the fun of the teenage-like Rift Zone has been traded in for a bit of middle-aged responsibility. Is that a bad thing? Not for every rider. 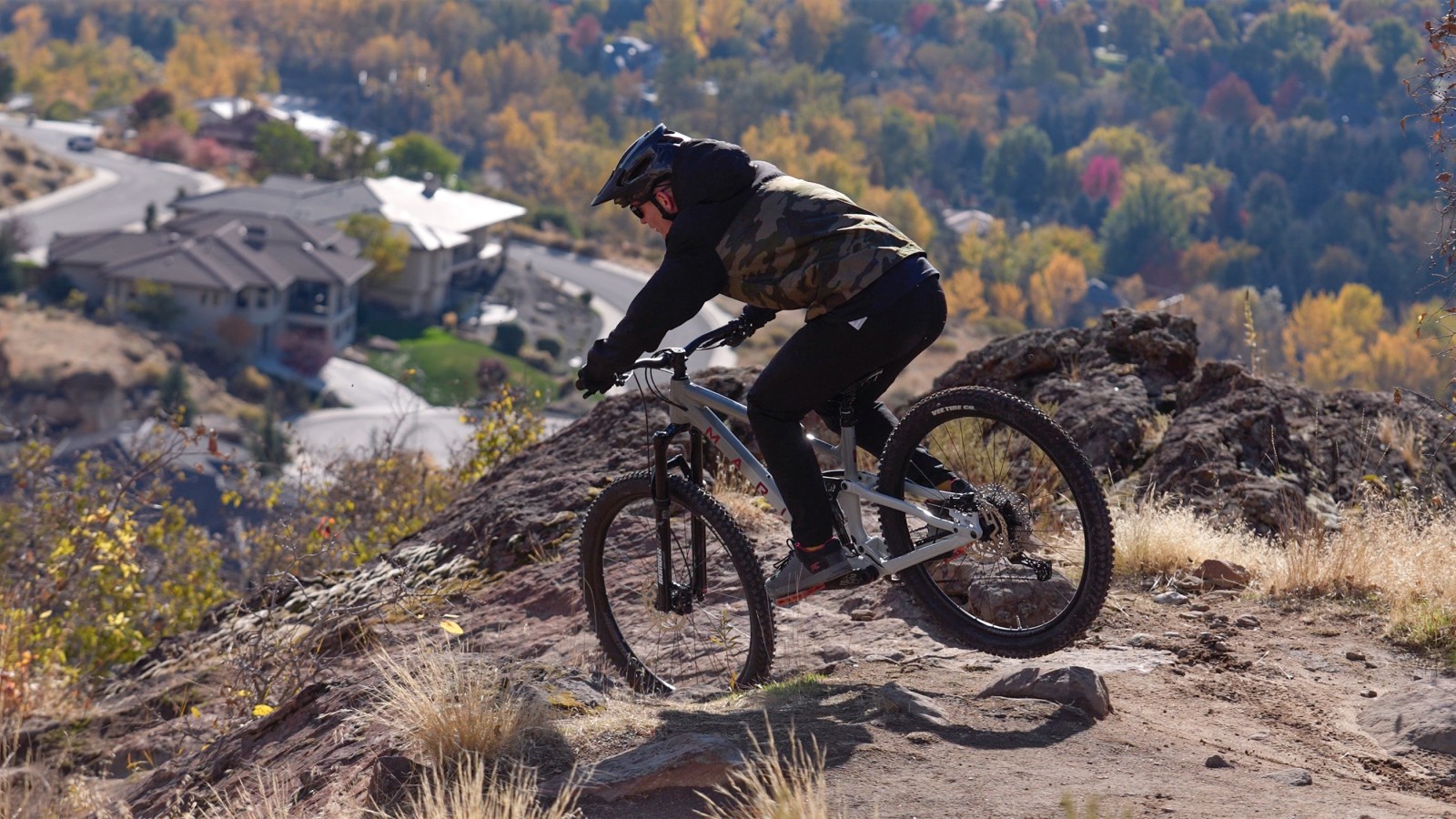 As the Rift Zone approaches enduro-ability through the updated layout, the sub-par brake spec on our 29 2 stands out even more than in years past. We get it, this is a $2,400 bike and we can't have everything; we applaud the price point. The two-piston Shimano stoppers with massive levers, however, just don't slow the bike down with any amount of conviction. During a not-too-high-speed riding scenario, we also managed to blow the rear tire completely off the rim with an awkward landing on an angled rock. We won't write off the tires as the culprit just yet, but it was a bit of a surprise to see the tire all the way off the rim rather than just a cut or puncture. 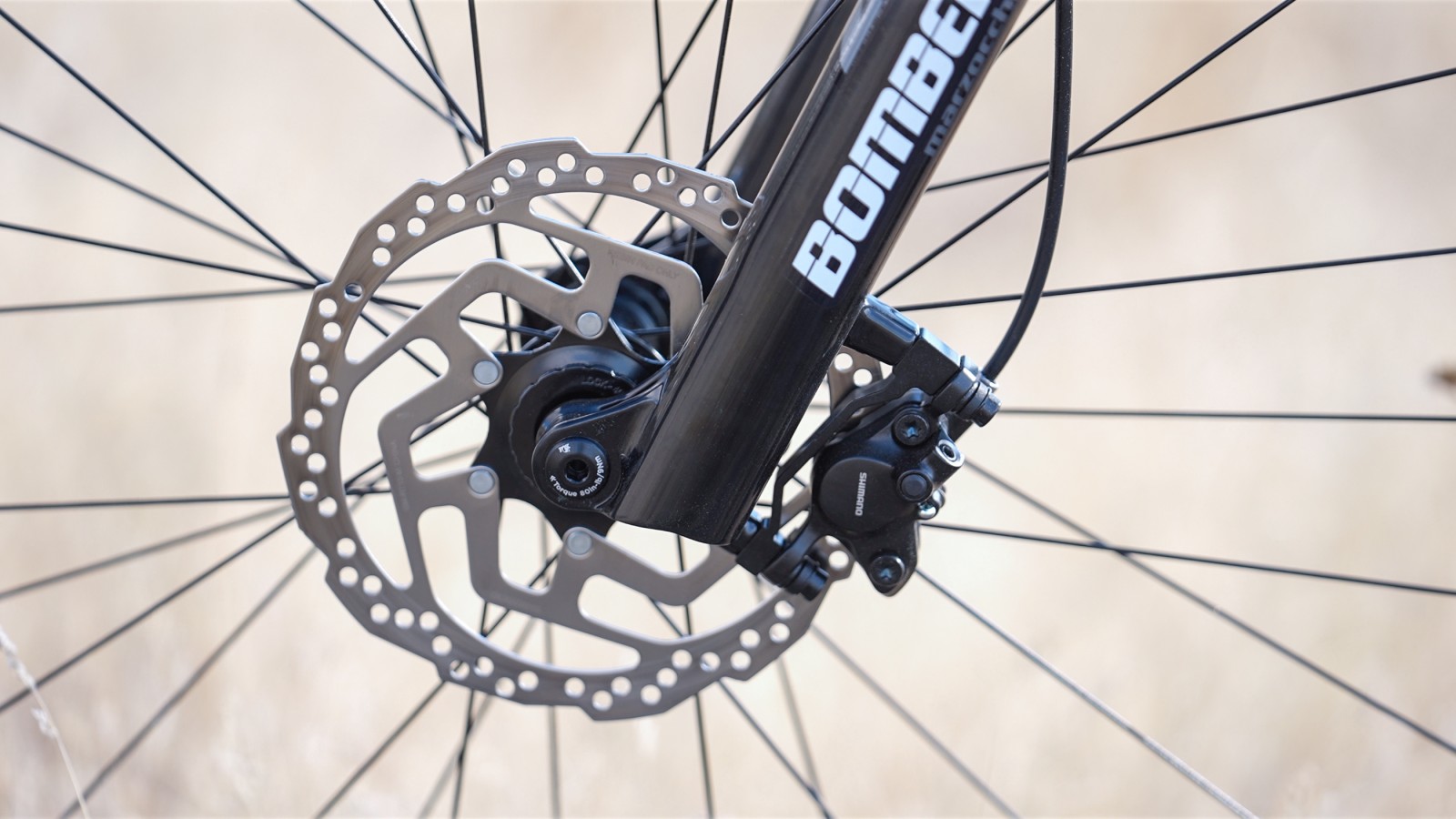 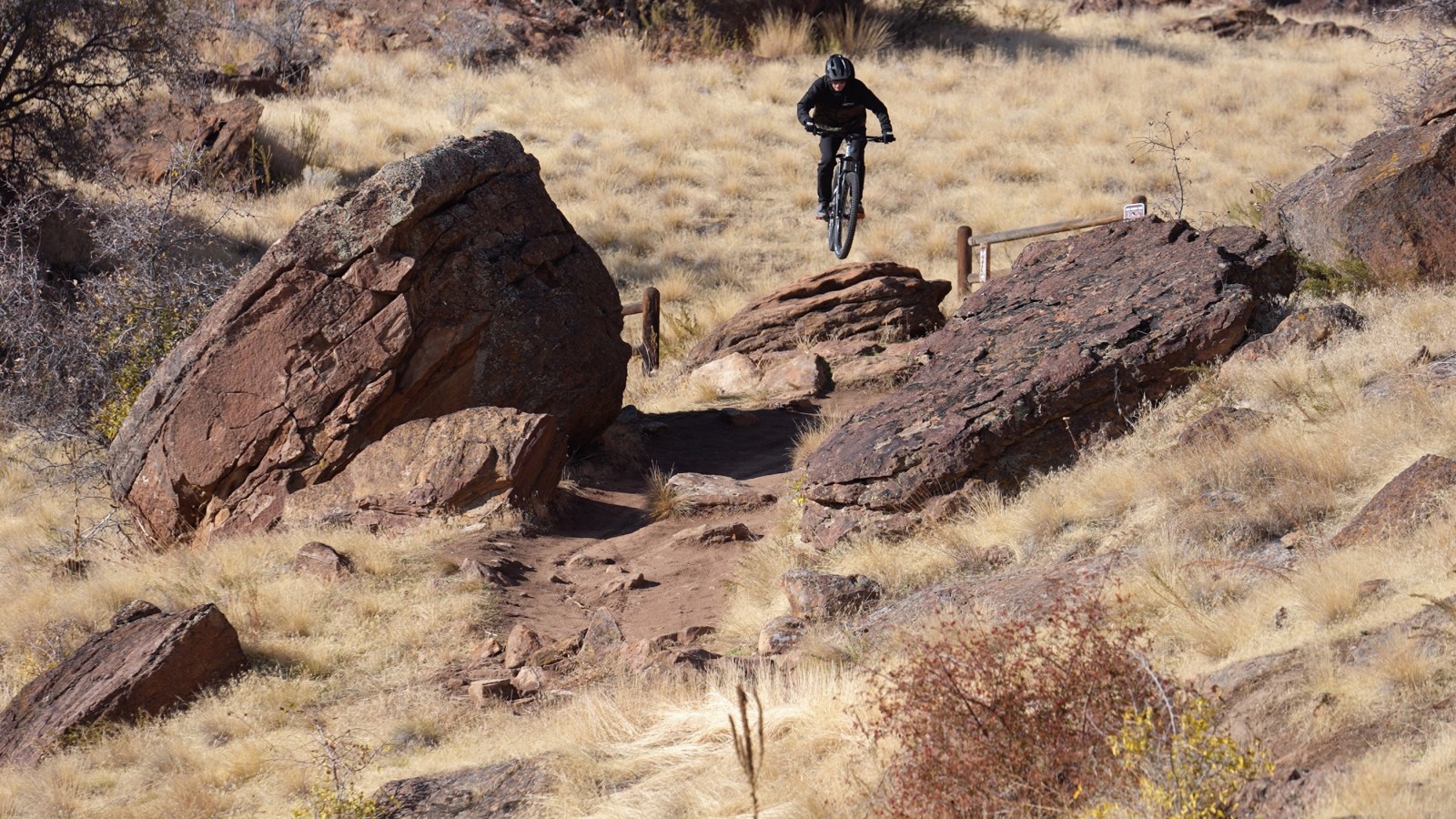 Our desire for a snappier trail bike may not be everyone's desire, however, and for the price, there are plenty of great things to say about the Rift Zone. We LOVE that $2,400 gets a Shimano Deore 12-speed drivetrain. We've praised this drivetrain for the last couple years, and continue to do so - it's bullet-proof. The Marzocchi Bomber Z2 is a stout piece of kit offering just enough adjustability and proper damping for this wallet-friendly trail machine. Marin's house wheels and components get the job done nicely. Some may groan about the centerlock hub and rotor interface, but this is expected on a Marin. We've never had an issue with the dependable TransX dropper post. The size Large does only come with a 150mm drop, but at least the XL has a 175 for the really tall riders. The updates to the frame's cable routing are a nice touch over previous versions that required zip ties and the beefy chainstay protector kept the bike quiet. 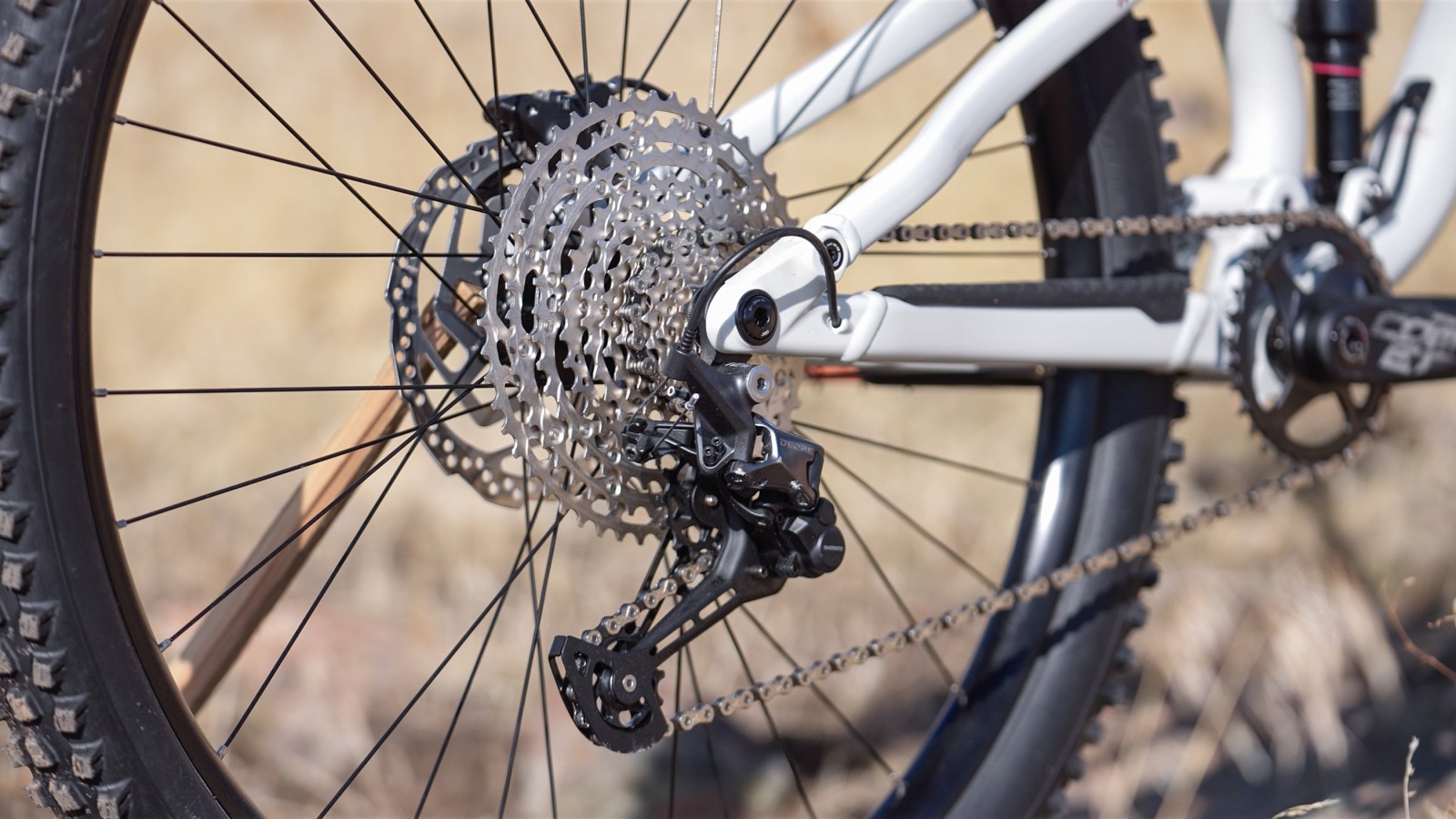 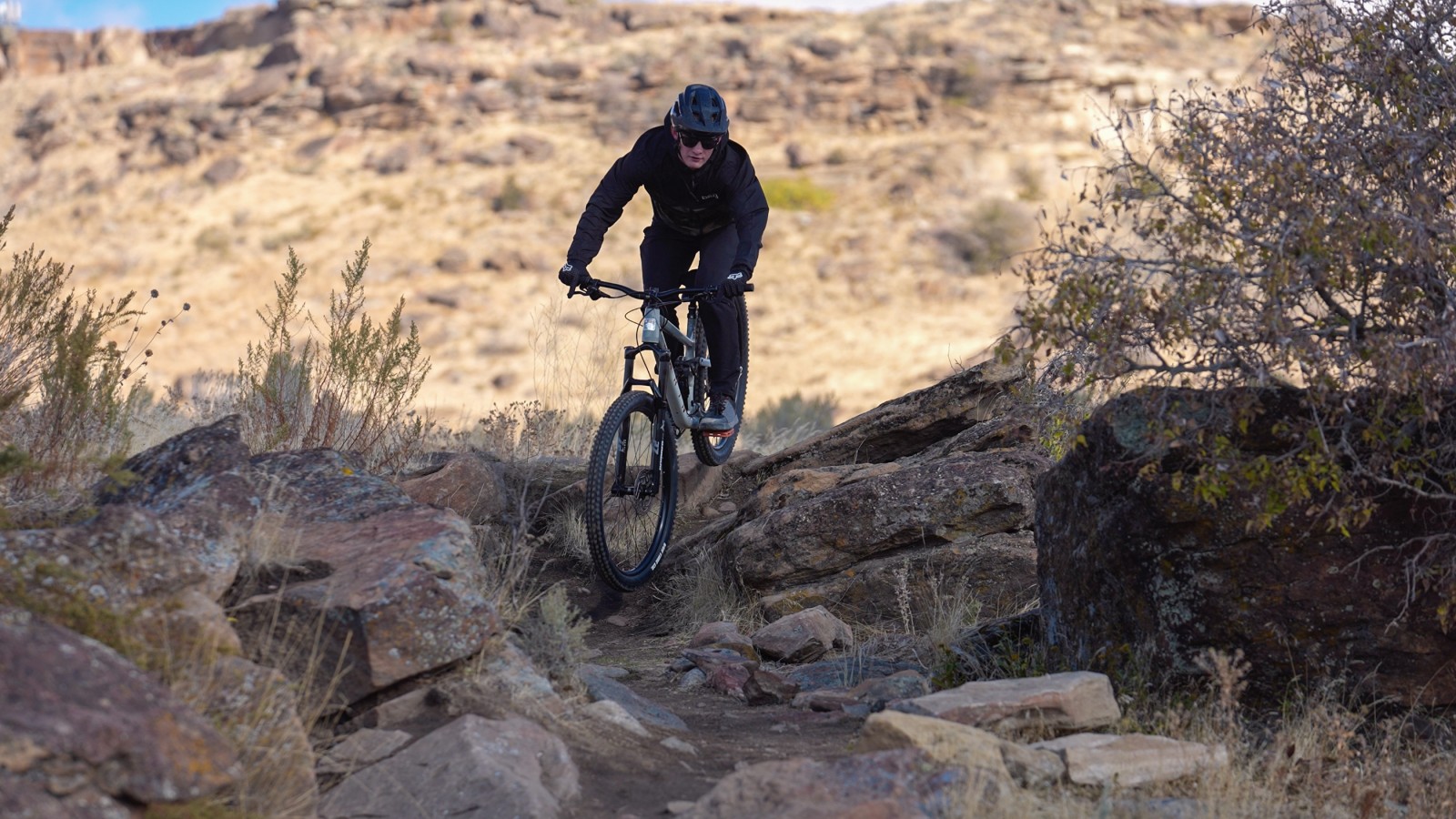 Our short experience on the Rift Zone 2 29 lead us to wonder how much fun the $3,499 XR model with 27.5 inch wheels would be. That bike has a fantastic build for the price with four-piston brakes and Maxxis tires, Z1 fork and FOX Float X shock, and the small wheels just may be the secret for satisfying our hankering for a more playful Rift Zone like the one we used to love. On the contrary, we realize not everyone is looking for a "party" experience on the trail, and the 29-inch models with stability and composure definitely have their place in the world.

We'll see what we can do about getting aboard that 27.5 XR model for some feedback because that bike looks like a hoot! 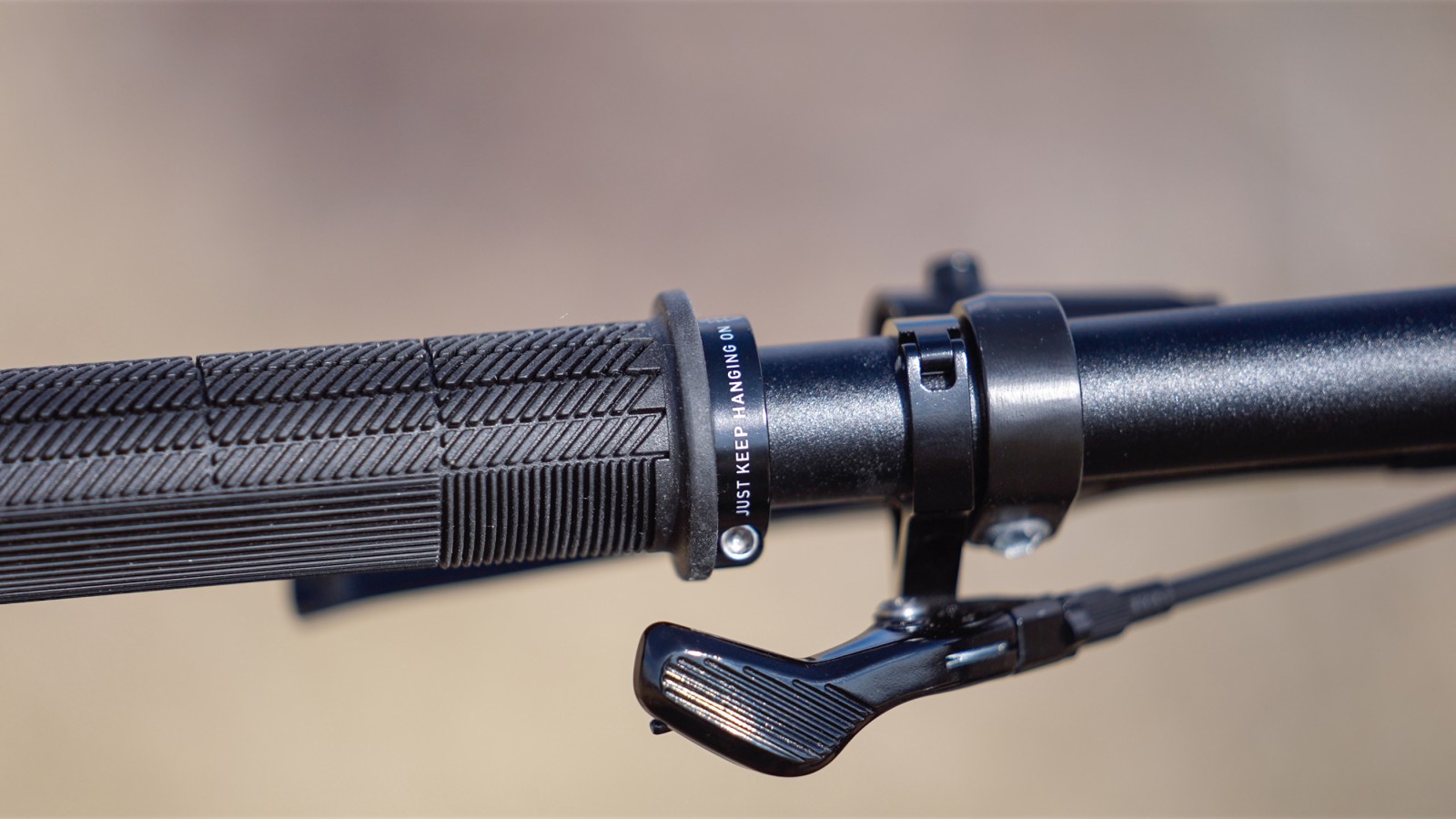