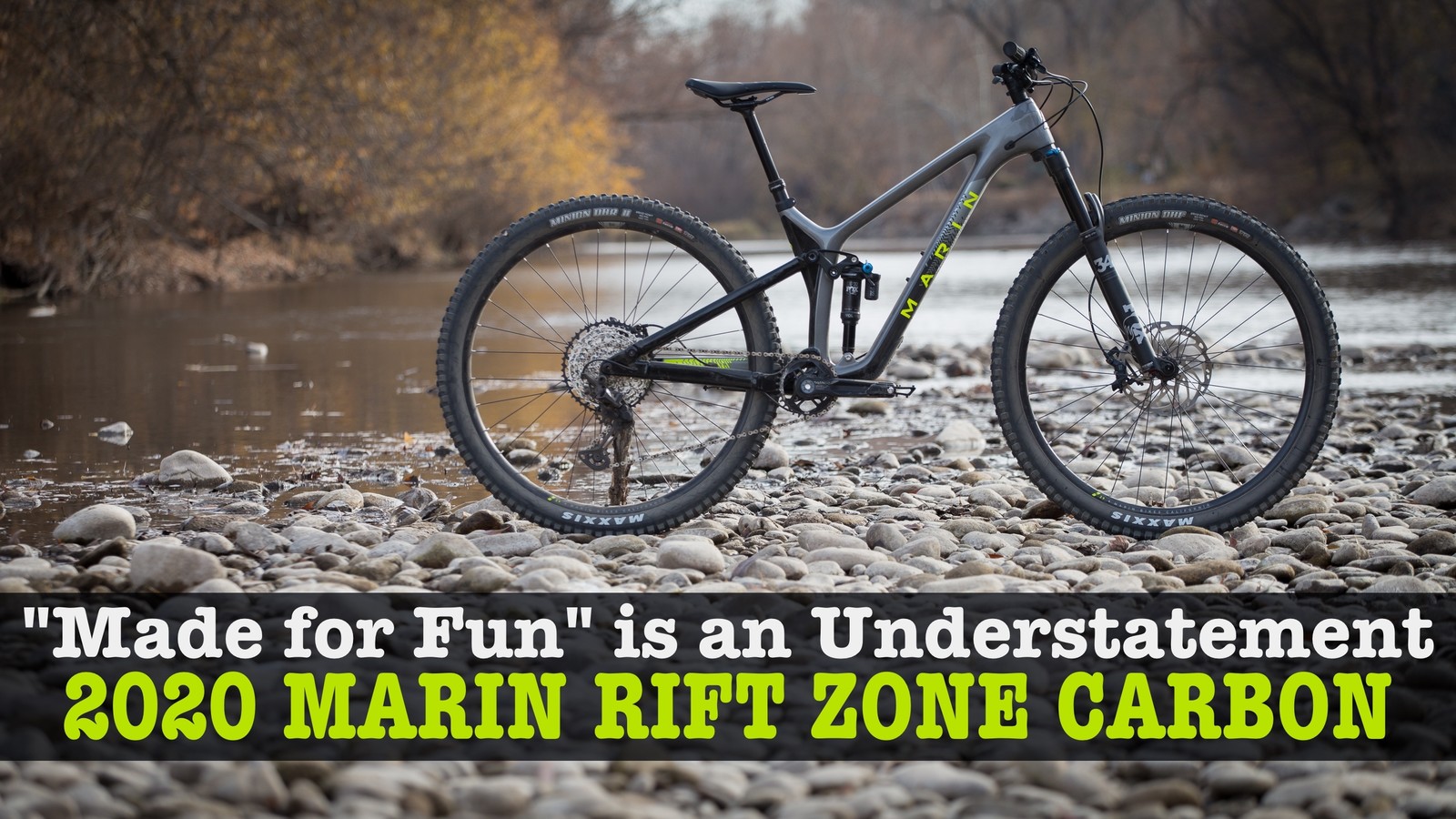 The happiest of days are here for mountain bikers when a whip like the Marin Rift Zone Carbon comes along. Marin has been in the game since 1986; a household MTB name. With a few shaky years and some questionable bike designs in the early 2000's, Marin has really found itself with their Alpine Trail, Hawk Hill and Rift Zone lines. Marin still hangs it out with the unique R3ACT suspension-equipped Wolf Ridge and Mount Vision, but the 27.5-inch-wheeled Hawk Hill and 29-inch-wheeled Rift Zone are affordable, classic, alloy bikes aimed at the rider ready to make a serious jump into our sport. The base-level alloy 1 builds kick off at just $1,599 while the upper-level 3 bikes are just $2,649. 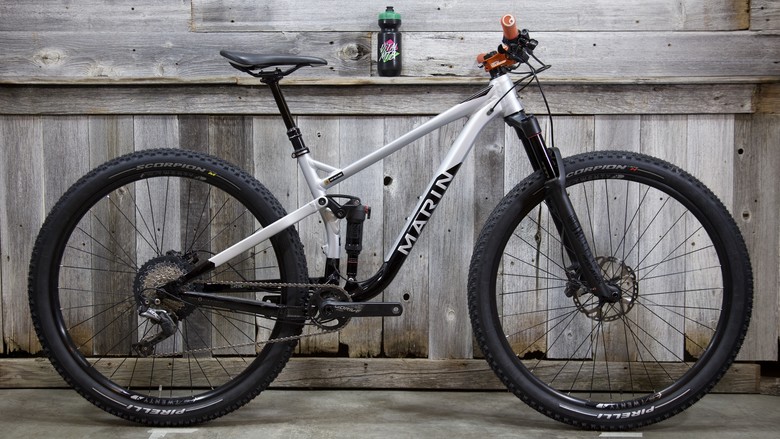 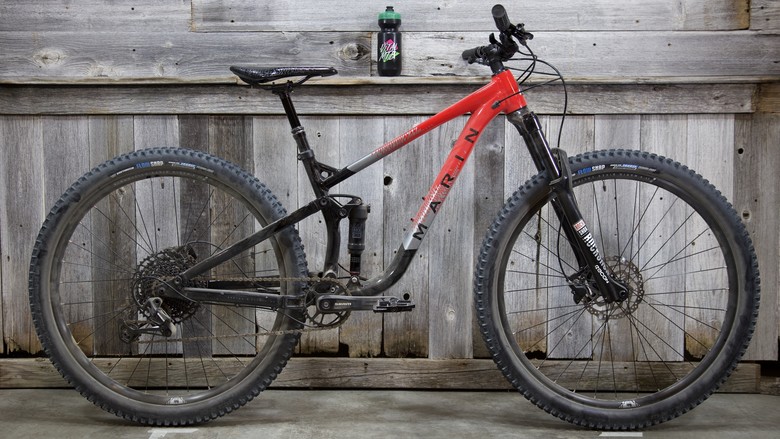 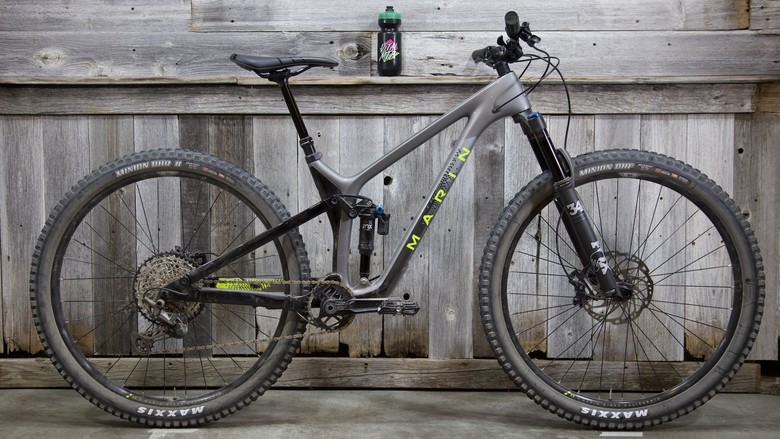 The alloy Rift Zones received a character-altering geometry and build update for 2020. The 2019 version was a fast, trail-ready 29er with angles and tires that made it a spruced up XC bike, able to survive heavier gravity-fed sections, but not thrive in them. The 2020 Rift Zone's travel grew from 120mm front and rear to 125mm out back and 130mm up front. Extending the reach (from 441mm to 455mm on a medium), steepening the seat angle to 76-degrees, slacking out the head-angle (two degrees from 67.5 to 65.5) and tucking in the fork offset from 51mm to 44mm, the 2020 Rift Zone is ready to handle modern riding in aggressive terrain. The updates to these budget-oriented bikes were great to see, and when Marin told us they had a carbon version of this new Rift Zone with nicer spec, we were intrigued. The combination of monster truck and poppy play-bike these modern, short-travel 29ers bring together has made us reconsider what's possible with five-inches of travel or less. 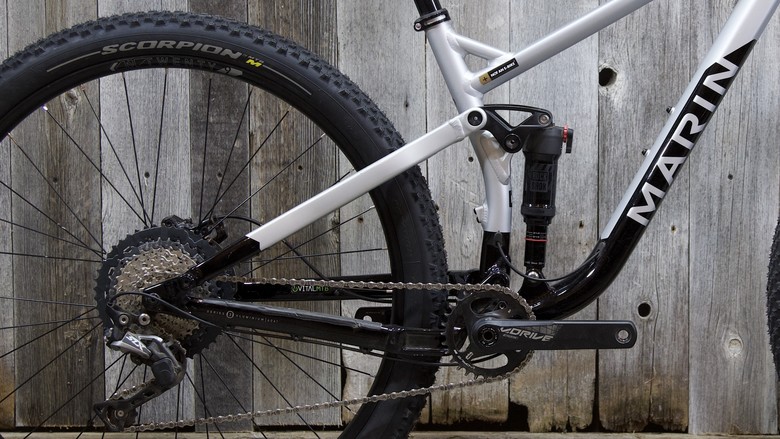 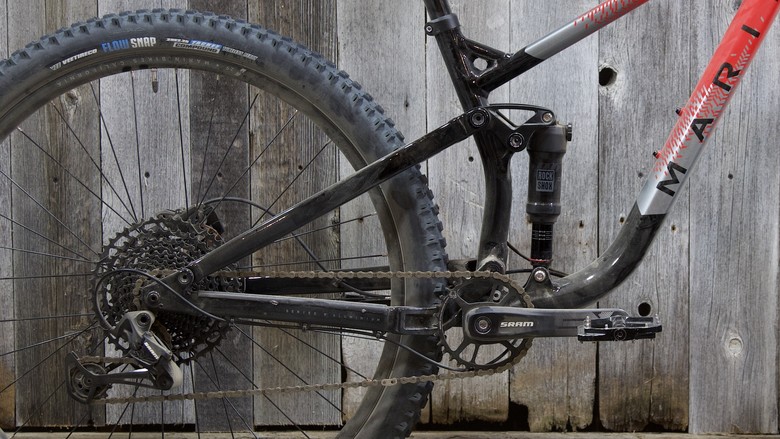 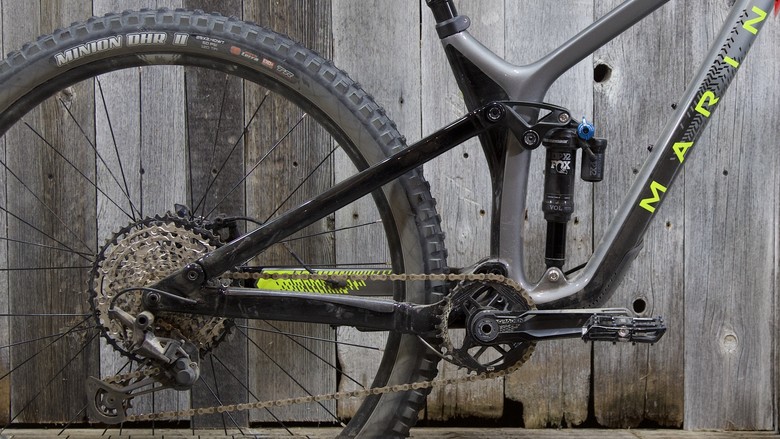 There are two new Rift Zone Carbon (RZC) models, both with a high modulous carbon front triangle and alloy rear end that's inspired by the longer-travel Alpine Trail 29er. The Enhanced Series 4 aluminum swing arm has oversized bearings and a locking collet main pivot. We were pleased to see that the RZC was more than just an alloy Rift Zone with a carbon front end. We were also glad to see the $4,399 Marin Rift Zone Carbon 2 show up; not so much because we wanted the more expensive, nicer-spec'd bike, but that classy grey and black with pop of tennis-ball green looks really tidy. The $3,499 Rift Zone Carbon 1 with its minty green, black and red wouldn't be our first choice if we're being fashionistas. Stoked on the color, we built up the bike, and liked what we saw. 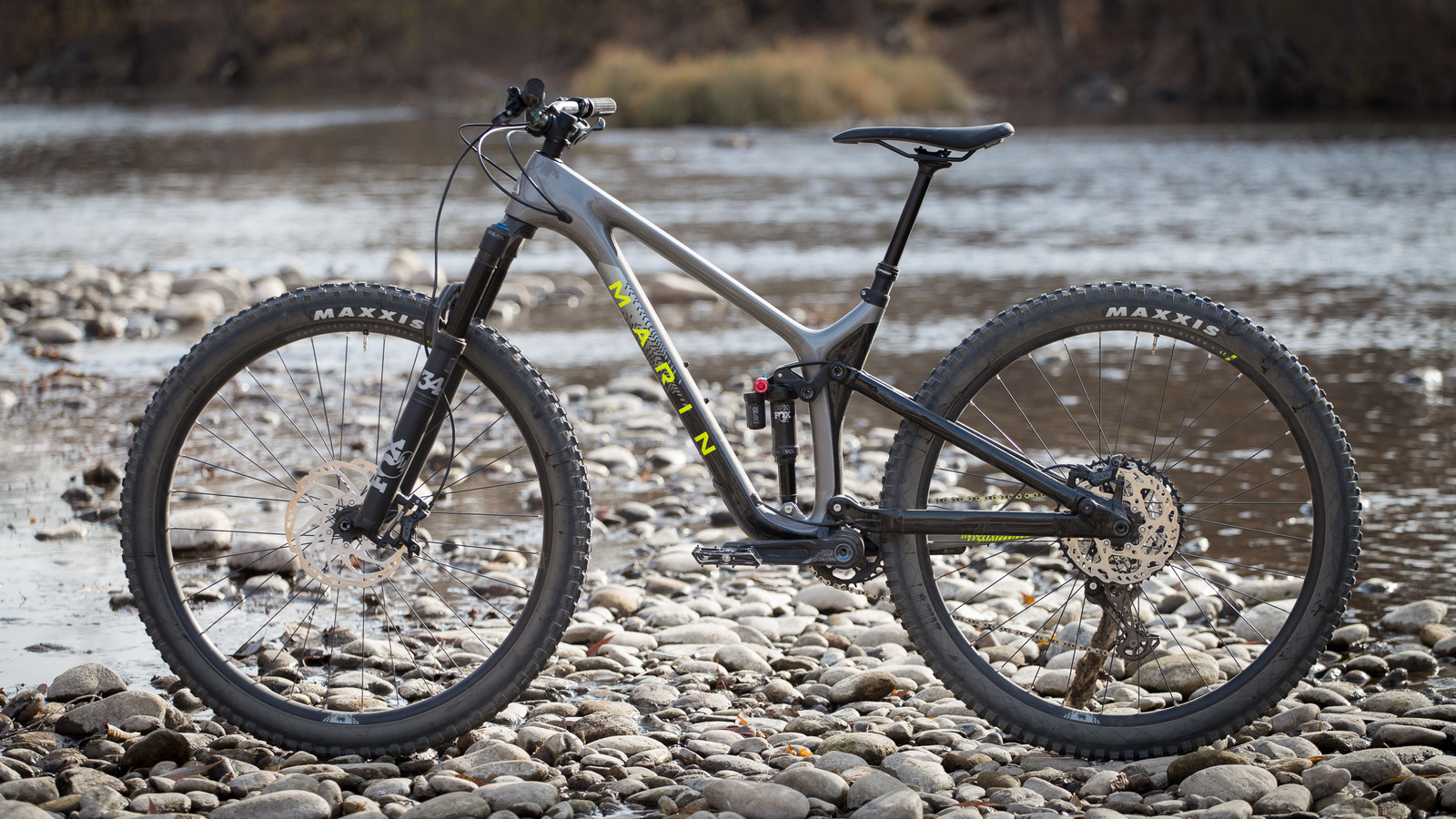 At $4,399, the FOX 34 Float Performance fork and Float DPX2 Performance shock were in the ballpark and nicer than the FOX Rhythm suspension that can sometimes be found on bikes at this price. The suspension is tunable enough, handles all trail conditions and has support in the right places. We also know Shimano's 12-speed SLX drivetrain (with XT rear derailleur) and brakes are solid performers. The 203mm front rotor grabbed our eye and gave us comfort knowing we'd be able to stop whenever and where ever we wanted. Centerlock rotors aren't our go-to choice purely from an availability standpoint, but they adorn the RZC. 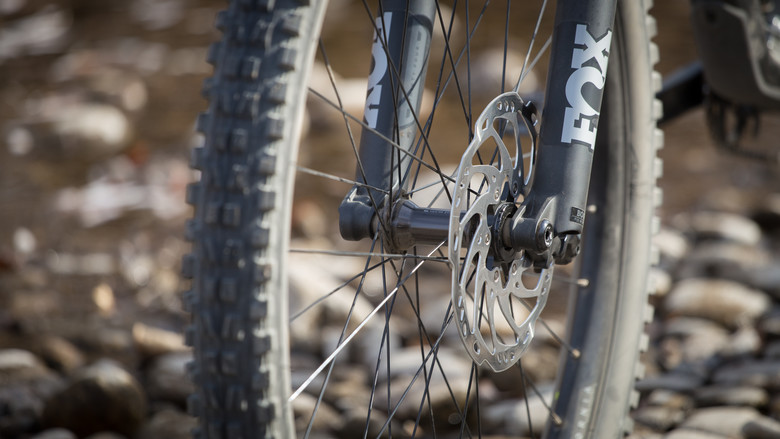 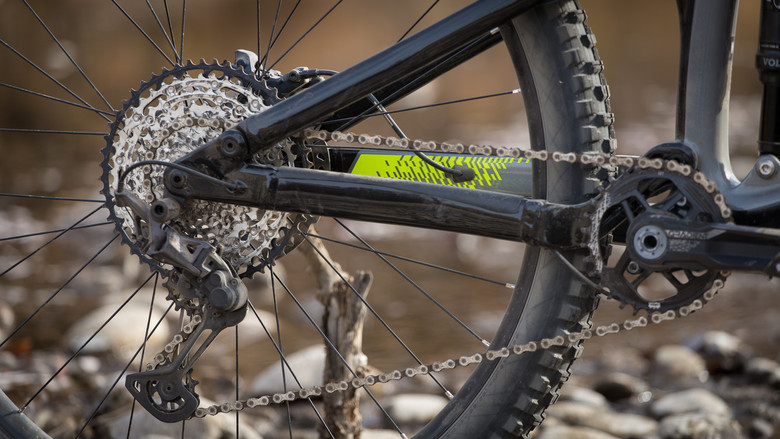 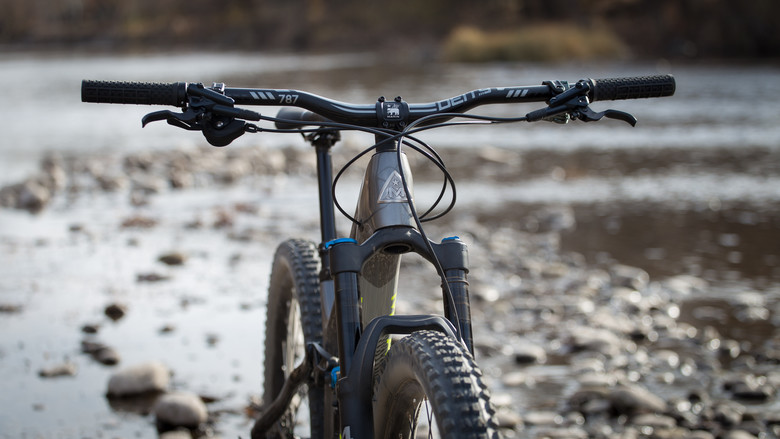 That familiar, fun little 35mm Marin stem that has followed the Rift Zone the last couple years holds onto Deity Skyline alloy bars. A PNW Loam Lever activates the 150mm X-Fusion Manic dropper seat post on our size medium.  Size Large also gets the 150mm while size small runs a 125mm dropper and XL hosts a 175mm Manic. Dropper insertion is nice and deep, and the 400mm seat tube on our medium is 20mm shorter than the previous Rift Zone allowing us to get the saddle nice and low on descents.

The Deity bars and PNW Loam Lever are a nice touch of name-brand bling in contrast with the house-brand grips, saddle and dependable 29mm-wide rims. The Maxxis Minion DHF and DHR tire combo had us pumped. 2.5-inch WT up front, 2.4-inch WT out back, both with the new EXO+ casing. More support, more damping and more security is fine with us. When our medium Rift Zone Carbon 2 hit the scales, it clocked in at 31.5 pounds. Not featherweight, but acceptable.

That "Made for Fun" slogan on the stem is inspiring, but it's an understatement. The Rift Zone Carbon was exactly what we'd hoped for - a bike with pop and flow that can also run shit over; a bike that doesn't mute the trail but doesn't rattle our fillings out when it gets rough. The geometry is a home run, combined with predictable, no-frills suspension and proven tires. It's not the most extreme geometry of this hip genre of bike, but it's in that do-it-all sweet spot. The linkage-driven single pivot (Marin calls theirs Multi-Trac) keeps the ride lively, but the  EXO+ tires, 203mm front rotor and ability to drop the saddle way down lets rider and bike charge bigger hits and holes as if there was more travel available. Bikes like the Rift Zone Carbon will make you wonder if you've been a victim of being over-biked all these years. 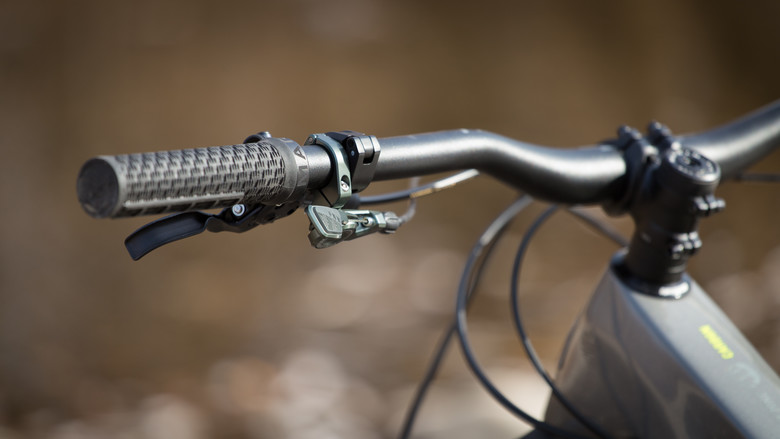 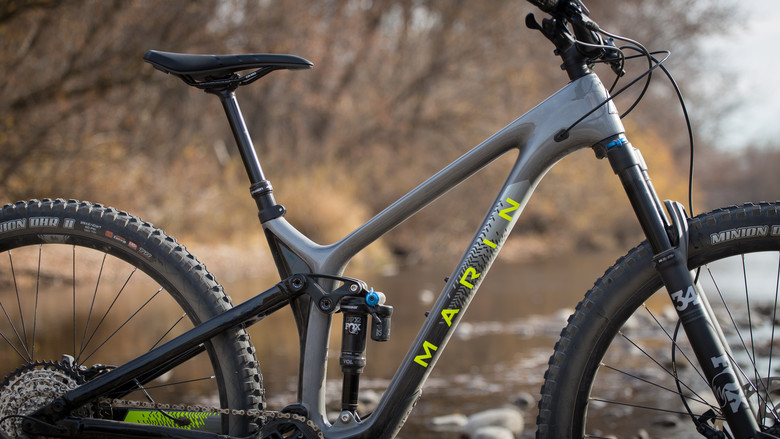 Well done, Marin. We're not sure how you're going to change your slogan, but we'll say it again, "Made for Fun" is an understatement when your new Rift Zone Carbon is concerned.

Marin Bikes can be purchased at authorized dealers and directly online through Jenson USA. 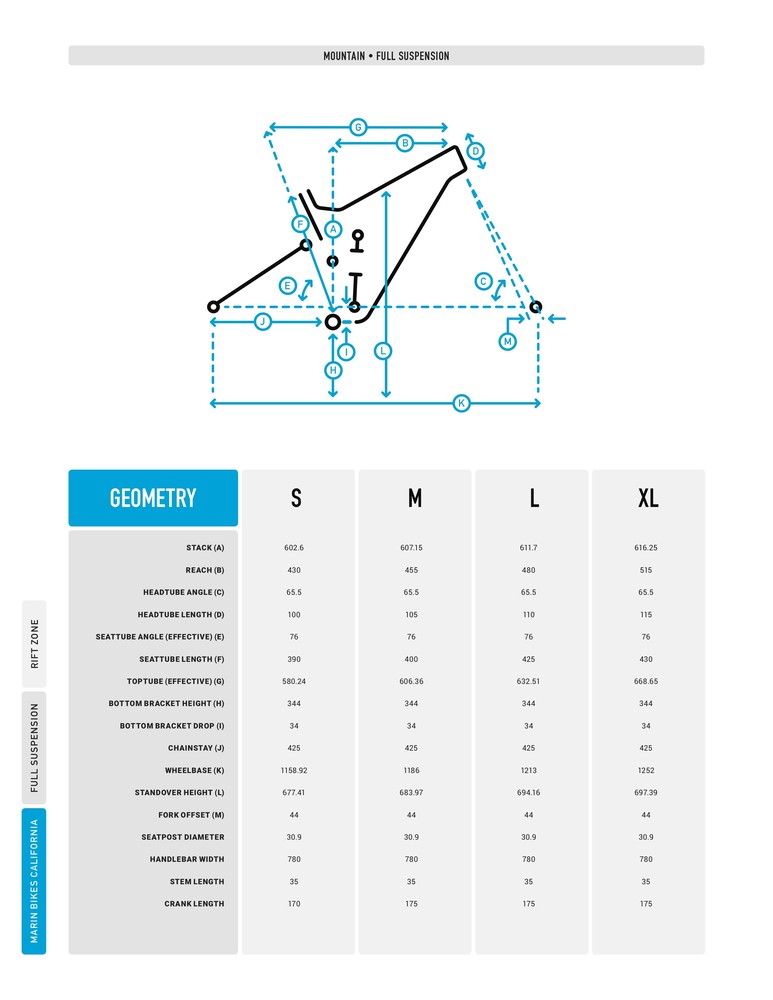 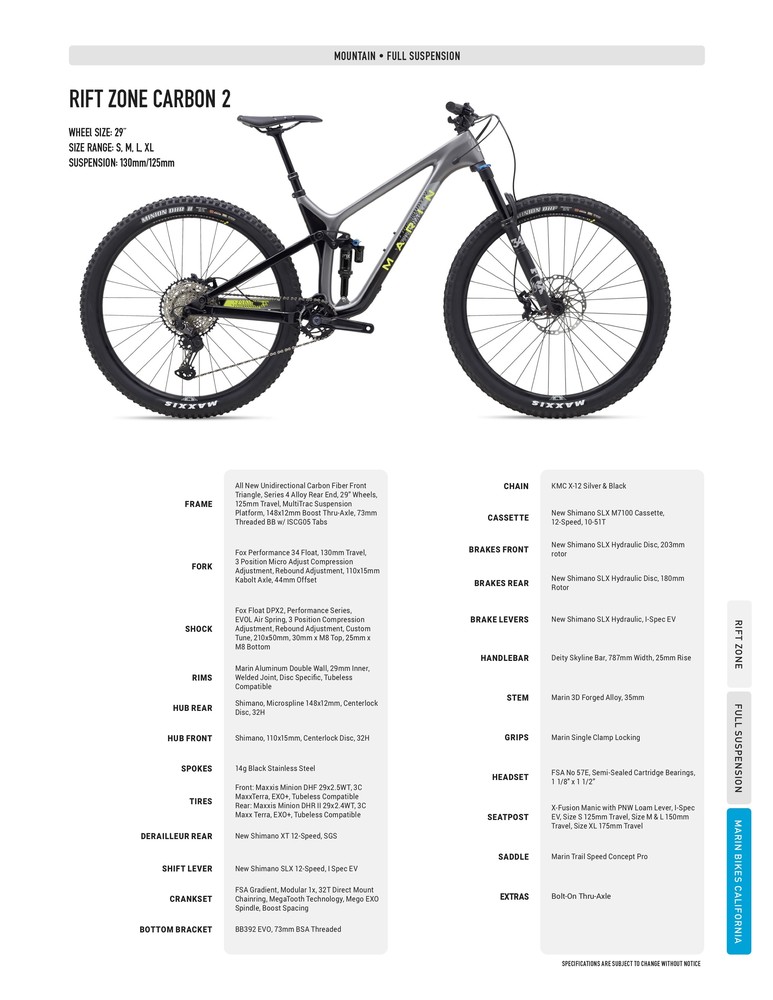 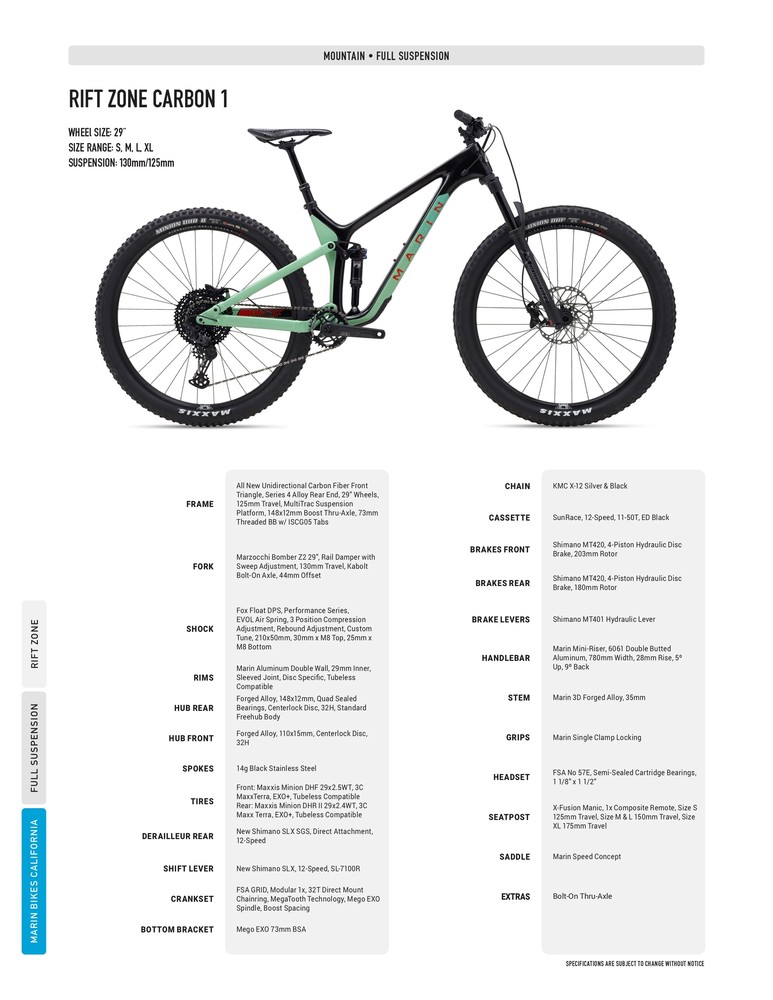 View replies to: "Made for Fun" is an Understatement - 2020 Marin Rift Zone Carbon First Ride